In every male dominated field, there are women who are unafraid to do what others only dream of. Piracy is no exception. A pirate is usually pictured as a bearded man with a patch over his eye, and a sword in his hand. Here at Top Tenz, we want to change that misconception. There were more than a couple badass female pirates that roamed the seas, and none of them had beards. Here are 10 of the most badass female pirates of all-time… Born in Ireland as the illegitimate daughter of a lawyer and his servant, Anne’s father was publicly humiliated by his wife for his affair and he decided to leave with his mistress and child to America. After settling in South Carolina, Anne’s mother died and she was left to take care of the household. At the age of 16, she fell in love with a pirate named James Bonny. Her father, ashamed that she hadn’t become the lady that he had hoped for, banished her from his estate.

Anne would follow her pirate lover to New Providence, where they would stay in a pirate hideout. James Bonny had a difficult time providing for Anne and became an informant for the government, disappointing Anne in the process (she had grown to adore pirates). Anne decided to leave James Bonny and ran away with another pirate by the name of Calico Jack Rackham. He wasn’t a particularly successful pirate, but he sure knew how to spend his booty well. Although their relationship wasn’t public, it was well known that she was the Captain’s lady. Pregnant with their child, Rackham made Anne leave the ship to give birth in Cuba. It’s unknown what happened to the child, but soon after she re-joined the ship and found that Rackham had taken on board another female pirate by the name of Mary Read (more on her in a bit).

In the end, Rackam’s crew would be captured after raiding a commercial vessel. All the arrested pirates were sentenced to death, but Anne and Mary were able to escape the same fate as their fellow pirates by claiming they were pregnant. The finally resting spot of Anne Bonny is unknown. From a prostitute to a pirate lord. That’s one hell of a career change. Ching Shih was born in Guangdong province of China in 1775. She began working on a floating brothel in Canton. Apparently, Ching was particularly alluring because in 1801, Pirate Zhèng Yi, who commanded a fleet of ships called the “Red Flag Fleet,” took her as his wife. There are several contradictory accounts of how they became a union. Some accounts say Yi ordered the brothel to be ransacked and Ching kidnapped; others state that he simply proposed to Ching. Either way, Ching would join the “Red Flag Fleet” under the condition that she would get an equal share in the plunder.

Under their combined leadership their fleet grew from 200 ships to between 1,700 and 1,800 ships. By the time of her husband’s death, there were more than 70,000 pirates in their fleet. Fearful of having to return to a life of prostitution, Ching made a move to become the sole leader of the fleet and was successful. Under her leadership, the fleet took many coastal villages and imposed taxes on them. She was strict and cruel at times, but also had a moral code. If a pirate took a woman they had to be faithful to her. And if a pirate was found to have engaged in rape, they were executed. Ching also did not take kindly to deserters, and was known to hunt down any pirates who left the fleet and cut off their ears. The Red Flag Fleet became known as the “Terror of South China.”

It just so happened that she wasn’t the only female pirate in the Caribbean. She eventually joined forces with Anne Dieu-Le-Veut, a french criminal. In order to live the life of a pirate, as a woman, Jacquotte had to disguise herself as a man, but her great beauty gave her away. Eventually, she even staged her own death to escape other pirates. She became known as “Back from the Dead Red.” One of the most tragic stories on our list is the journey of Mary Read. Death seemed to always surround Mary. Her father died before she was born, and after she was born her half-brother died. Mary and her mother were supported by her grandmother, who only supported them because of her belief that her grandson was still alive. To keep her grandmother unaware of her brother’s passing, Mary was raised as a boy.

As a result of pretending to be a boy for 13 years, even after her grandmother died, she still maintained her boyish habits and dress. After several unsatisfying jobs, she joined the army, where she met her husband. Mary told him the truth, and they decided to leave the army and get married. Again, the dark cloud of death followed Mary as her husband died only months after their marriage. She joined the army again, boarding a Dutch ship en route to the Caribbean. As the trip was en route, it was attacked by pirates. Specifically, a fleet led by Calico Jack and, of course, Anne Bonny.

Mary soon learned to love the life of a pirate, and when given the opportunity to leave, she stayed on. As mentioned earlier, they were eventually captured. Mary escaped execution but died in prison from fever. Grace O’Malley is unlike most of the women on our list, in that she came from a wealthy family. She wasn’t driven to piracy by hunger or neglect or even adventure, but a rejection of the archetypal female role in society. Grace was born in Ireland in the 1530s to a wealthy nobleman and seatrader, who upon his death left his shipping and trading business to his daughter. Not only did Grace inherit wealth from her father, but she also received land from her mother. This allowed her to become a rich and powerful figure in Ireland. She soon used her father’s ships to demand taxes from coastline fisherman and carried out raids on rival clans’ ships. She commanded over a hundred men and more than 20 ships.

As Ireland came under greater control from the United Kingdom, Grace’s activities gained more attention from the crown. An envoy was sent to attack her castle, but they were quickly defeated. Eventually, Grace was captured and sent to England. Her lands and wealth were stripped away and members of her family were captured. Luckily for Grace, she got a formal meeting with Queen Elizabeth I (pictured above) who, for some reason, granted Grace’s lands to be restored. One Queen recognizing another. Ingela Gathenhielm is an odd case on our list: a female pirate who had the approval of King Charles XII to plunder ships from neighboring nations. Ingela raided ships along with her husband, but she was said to have been the brains behind the operations.

After her husband’s death, Ingela took full control over the business and as the Great Northern War raged on, Ingela continued to swim in profits. She came to be known as the “Shipping Queen.” All good things come to an end, and after a treaty was signed, Ingela gave up her operations, remarrying a lieutenant and dying soon after. Anne Dieu-le-Veut lived a life that’s hard to believe. Sent to the New World to become a wife of the male colonists, Anne is believed to have already had a criminal record. In 1683, her husband was killed, and Anne challenged the killer to a duel. The killer was a famous buccaneer, Laurens de Graff, and accepted the challenge. Laurens pulled a knife and Anne pulled a gun.

Somehow, Laurens was able to back out of the duel, stating that he would never fight a woman. He’d go on to propose to Anne, who accepted. (We smell a Rom-Com in the making!). Anne became a pirate fighting alongside her husband, and was known as a fierce warrior. Mystery surrounded her as she never tried to disguise her appearance, and made it be known that she was a woman. Usually, women are seen as bad luck on a ship, but Anne’s presence was seen as a harbinger of good things to come. 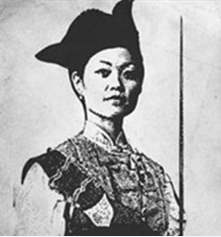 Arguably the most powerful and well-known pirate in Chinese history, Lai Choi San may have been forgotten if it wasn’t for the work of Aleko Lilius. His book, I Sailed with Pirates, has preserved La Choi San’s place in the history of her nation.

A 20th century pirate, she commanded a fleet of 12 junks (a style of Chinese ship) in the South China Sea. During the 1920s and ’30s, she was paid protection money from local merchants who feared reprisals. Even the Chinese government did not interfere with La Choi San’s fleet.

The only American on our list, Rachel Wall, was the last woman hanged in New England. She was hanged for stealing a bonnet, but it was her life as a pirate that led to her death. Born Rachel Schmidt in Carlisle, Pennsylvania in 1760 to devoutly Presbyterian parents, she left home at 16. After marrying a fisherman and traveling up the east coast, she eventually settled in Boston. Her husband eventually convinced her to turn pirate, and in 1781, they stole a vessel called the Essex. After stealing the vessel, they dressed it up as if it had been damaged at sea. Rachel called on passing ships for help, then they robbed them. In total, they robbed 12 ships, stealing thousands in cash and killing 24 sailors. The following year her husband drowned, and Rachel returned to Boston to work as a maid.

Not surprisingly, a life as a maid wasn’t enough for her. Rachel returned to theft, and became notorious for stealing from docked ships. Soon enough her life of crime would catch up to her, she stole from Perez Morton, a revolutionary patriot and friend of John Adams. Finally, she was arrested for stealing a bonnet from 17-year-old Margaret Bender. Rachel was tried and sentenced to death by hanging. The harsh punishment was part of an ongoing wave of capital punishment to protect private property. We just hope it was a really nice bonnet. We close with the only woman on our list who may be the stuff of legend. Awilda is said to have been a Scandinavian princess who embarked on a life of piracy to disobey her father. The daughter of Synardus, the King of Gotland (a Swedish Island), her parents supposedly kept her locked away in a tower, protected by two poisonous snakes until a suitor emerged to defeat all the traps and win her hand. Gee, we can’t imagine why some people think she’s made up.

Anyway, the suitor was meant to be Prince Alf of Denmark. So yeah, this is probably a myth, but at least this story didn’t make the princess helpless. Far from it, in fact. Awilda escaped from her parents’ castle dressed as a man, and decided to become a pirate and, with the encouragement and help of her female friends, managed to commandeer a ship. During her adventures, she came across a pirate ship without a leader and convinced them of her merits. She became their leader, and took their fleet to such heights that the King of Denmark sent a fleet after her, led by Prince Alf. Naturally, Prince Alf defeated Awilda’s pirate fleet and took her captive. After removing her helmet and realizing it was Awilda, they knew it was meant to be. They agreed to be married. A fitting ending for a princess.