When it comes to the hotly debated field of Biblical archaeology, the specialists who arduously excavate within the countries or ancient sites referred to in the Bible often uncover archaeological finds that broaden our knowledge of the world as it existed in ancient times. It goes without saying that these finds usually lead to intense interest from the media and severe scrutiny from historians and fellow archaeologists alike, as the need for unbiased reporting remains crucial to each find.

Though most of today’s key Biblical archaeology finds are the result of years of structured and meticulous excavation, some are occasionally uncovered only through sheer luck and the persistence of the archaeologists themselves.

On July 21, 1993, the project surveyor for the Tel Dan archaeological site in Israel, Gila Cook, discovered ancient writing on one of the reused building stones in an ancient wall. The surface of the stone was polished on two sides and the identified letters, BYTDWD, was clear and unmistakable. The letters or inscription refers to the “The House of David” and could firmly be dated back to the 9th century BC due to an ash layer dated 733/722 BC caused by later Assyrian wars.

These ash layers are few and far between and remain every archaeologist’s dream as anything sealed beneath them has to be dated earlier. As such, there is no chance of intrusion by later finds. While some historians have tried to explain the inscription away, most agree that it refers to the lineage of David, the second king of the unified kingdom, and possibly the most important ruler in Israel’s history. The presence of the same letters, BYTDWD, on the Mesha Stele/Moabite Rock, also dated from the 9th century solidifies the existence and indeed the lineage of King David.

9. Yahweh and His Asherah A few miles west of the ancient Gaza Road (known as Darb Ghazza, in Arabic) lies the intriguing archaeological site of Kuntillet Ajrud. It has no known Biblical name and is isolated and almost inaccessible from other settlements in the vicinity. In 1975, archaeologist Ze’ev Meshel from Tel Aviv University and his team of nine volunteers, mainly from kibbutzim and a few of his co-workers, agreed to excavate at the site.

The finds from Kuntillet Ajrud were fantastic. Among the most notable finds were two 8th century BC pithoi, or storage jars, that weighed about 30 pounds each. The now-reconstructed pithoi are painted with male and female deities, humans, animals and symbols, and feature a number of inscriptions, including three that refer to Yahweh and his Asherah or Asherah. Though it has been found that many of the images were only added to the storage jars at a later date and possibly influenced by war in the ancient Near East, many have wondered whether these images depict God with his female consort – as Ashera was a well-known pagan goddess. While we cannot touch on the subject without opening a can of worms, the fact remains that everything about Kuntillet Ajrud and its finds continues to be puzzling, difficult to interpret, and even more difficult to see.

Through a cruel twist of fate, Pontius Pilate became famous in Biblical history as the Roman prefect who had to oversee the prosecution and crucifixion of Jesus Christ. But as Roman prefect, his duties included much more than the oversight of judicial matters, he was also in charge of public works. In fact, archaeologists recently uncovered a 2,000-foot-long (600 meters) boulevard built by Pilate, a feat he might have rather been remembered for

It took an estimated 10,000 tons of limestone to build the street and it is highly likely that the street connected to the Pool of Siloam in Jerusalem at the Temple Mount, a holy site where ancient Jewish pilgrims went to worship that is revered to this day. According to the archaeologists’ report in the Journal of the Institute of Archaeology of Tel Aviv University, the existence of the street might very well demonstrate that Pontius Pilate was not as insensitive to his Jewish subjects as history had painted him.

According to the Gospel of John, the Siloam Pool was the site where Jesus healed the blind man. The Siloam Pool has always been considered one of Christianity’s most sacred sites, even though its exact location remained somewhat unclear. The precise location was only confirmed during June 2004, when construction workers, attempting to repair a water pipe to the south of Jerusalem’s Temple Mount, uncovered several ancient steps and part of a colossal pool, dated to the age in which Jesus lived – the Second Temple age.

The Siloam Pool was found next to the area known as the King’s Garden, on the ridge identified as the City of David. It is surrounded by several other significant archaeological sites, such as the remnants of an ancient church dated to the 5th century, located just southeast of the pool. Its discovery marked an historic moment in the field of biblical archaeology.

Numerous archaeologists have tried to locate the remains of King David’s palace. As approval for archaeological digs in Jerusalem are notoriously hard to come by, many believe that the answer may lie in the vicinity of the monumental stepped stone structure on the east side of Mount Zion, close to the City of David. The stepped stone structure is arguably one of the most famous archaeological remains of the ancient city of Jerusalem and has been excavated half a dozen times during the past century.

The remarkable 20 meter (65 feet) high foundation structure, the most impressive Iron Age structure in Israel, was vital to the coordination and the protection of the City of David. More so than any other find close to or in the City of David, the ancient stone construction stands as a monumentally important reaffirmation of just how great David and Solomon’s Jerusalem would have been. Though the structure may appear to be nothing more than a gigantic mass of tangled stone and boulders, evidence indicates that it supported a significant stronghold. The 2005 discovery of massive interlocking walls and a massive stone foundation connected to the stepped stone structure may be crucial to conclusively point the way to what may remain of King David’s castle. Lying in the Egyptian Museum in Cairo, the Merneptah Stele is an intricately carved ancient stone slab that describes the conquests of the Egyptian Pharaoh Merneptah, who ruled between 1213 BC and 1203 BC. The Merneptah Stele features the earliest textual reference to the lands of Israel and is the only reference from ancient Egypt, proving that Israelites occupied the lands of ancient Canaan 3,200 years ago.

The Stele gives a description of all the enemies Pharaoh Merneptah defeated during his campaigns, stating “Israel is laid waste and his seed is not.” Those words are of crucial importance to the history of ancient Israel, as the mention may very well be the “Archimedean point” for the earliest recognition of a ethnic/cultural entity called Israel. The late 13th century BC mention of the lands of Israel also positively relates to other archaeological evidence of the earlier settlement of the “Israelite” tribes in the central hills area of Canaan.

4. The Numerous Discoveries of Jerusalem Over the centuries, major religious events have taken place in Jerusalem. Both early Christianity, and subsequently Islam, continue to see Jerusalem as a holy city. Some of the most noteworthy finds in Jerusalem relevant to the Bible have been the Iron Age remains in the City of David, which included the original kernel of the city, where fortifications, water canals, houses, and even small amphitheaters were found.

In other parts of the ancient city, remarkable remains of the Iron Age, such as the First Temple, as well as Hellenistic-Roman remains (Second Temple, early Christian) reflecting the history of the city and relating to the biblical periods, have been uncovered. The Temple Mount itself still bears the remains of the outer construction of the Second Temple’s precinct. The Rosetta Stone will never make it to a “Top 10 Best Reads” list. In fact, the information on the stone doesn’t make for entertaining reading in any way or form. In 196 BC, a scribe affirmed the divinity of King Ptolemy V’s cult by chiseling the decree onto the stone three times in a row – each time in a different language. But for the combined use of three languages, Ancient Greek, Ancient Egypt’s hieroglyphs as well as demotic script, we may have never deciphered Egyptian hieroglyphs.

While the Rosetta Stone was discovered during Napoleon’s campaigns in Egypt in 1799, it ultimately made its way to London where it remains to this day. Due to our understanding of ancient Greek, it only took a small leap to decipher the ancient hieroglyphs and Jean-Francois Champollion managed to do so in 1822. The deciphering of the Rosetta Stone opened our eyes to more than 3000 years of perplexing illustrations engraved on Egyptian statues, temples, and monuments, and gave us a plethora of knowledge that verifies the Scriptures.

In 1947, the world received one of its greatest Biblical archaeology gifts when a young shepherd boy discovered the Dead Sea Scrolls. Uncovered in different caves on the northwestern shore of the Dead Sea, the thousands of pieces of parchment were painstakingly pieced together over a number of years and played a significant role in our understanding of ancient Jewish culture and the Bible today as the scrolls covered the entire Hebrew Bible except for Esther.

The scrolls were dated to the late 3rd century BC and also included several non-biblical writings, commonly linked to the religious group of Essenes, that lived and worked in the surrounding region of Qumran. The Dead Sea Scrolls highlighted many facets of the Second Temple Jewish culture. They are indeed the greatest – and, in most cases, the earliest – examples of the Bible’s holy texts. 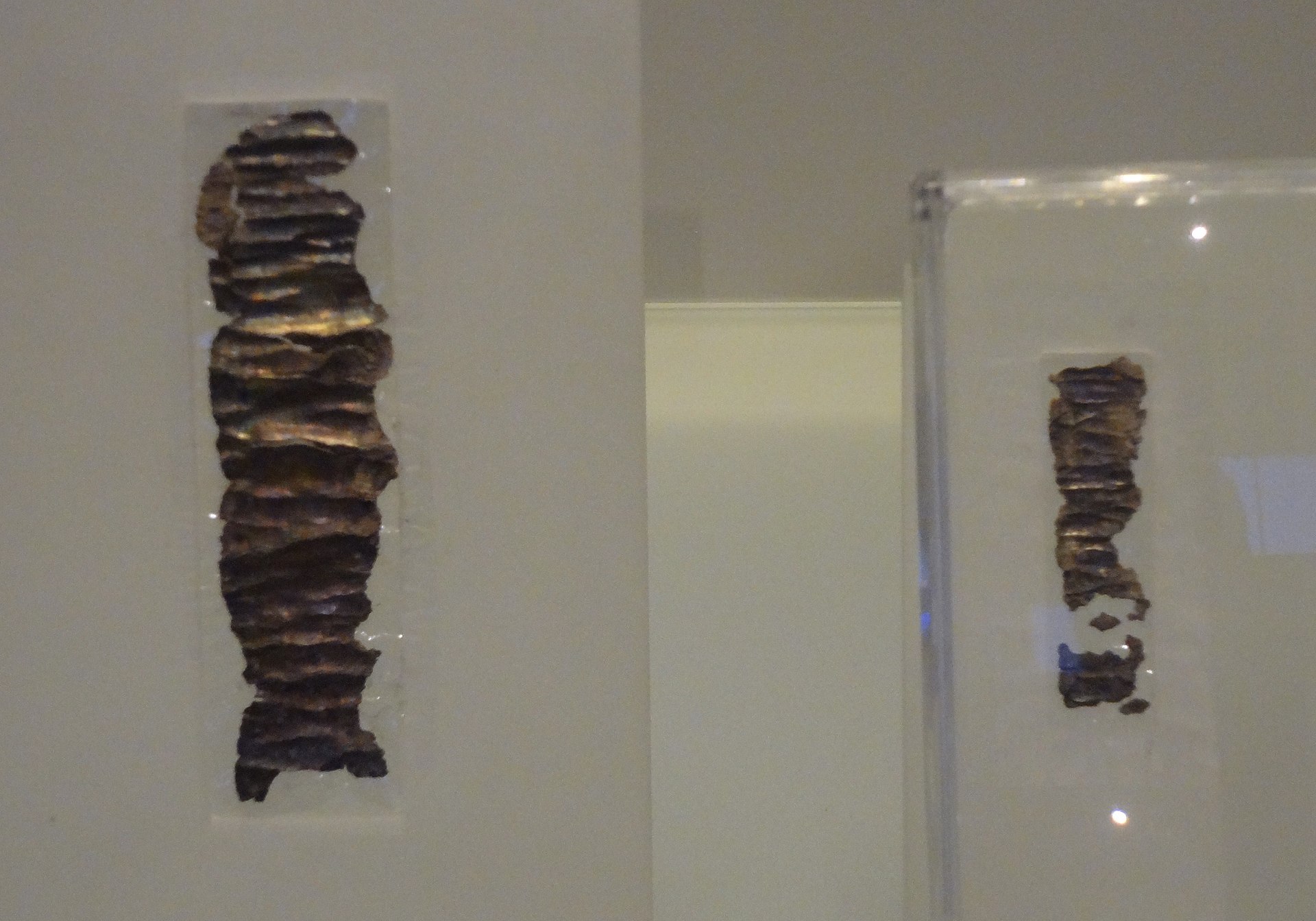 “May the Lord bless you and keep you; may the Lord cause His face to shine upon you and be gracious to you; may the Lord lift up his countenance upon you and grant you peace.” The blessing might be one of the most recognizable verses spoken in ceremonies of both Judaism and Christianity today. Yet very few know that the Priestly Benediction is the earliest biblical verse ever to be discovered from ancient relics. Two small spools of silver, each wound securely and bearing the engraved phrase, were discovered in a tomb near Jerusalem and dated back to the late 7th or early 6th century BC – more than 400 years older than the Dead Sea Scrolls.

Apart from archaeological circles, these two scrolls-which contain the oldest citations of Biblical texts in Hebrew-remain relatively unknown. To add to their significance, the fact that the blessing was discovered on two separate artifacts in a tomb of that age underscores the significance of the benediction to the ancient Israelite’s religion.