The ancient world consisted of four great civilizations: China, Egypt, Mesopotamia, and the Indus Valley Civilization. China, Mesopotamia, Egypt have been widely researched and are well known to us all. But the fourth and equally important one, the far more sophisticated Indus Valley Civilization, seems to have been lost to the world. Only rediscovered in the 20th century, the fact that the peaceful civilization seemingly did not engage in warfare and left few clues as to its ultimate demise continues to mystify archaeologists and historians to this day.

10. The Indus Valley’s Size and Population The Indus Valley Civilization covered an area of 1.26 million square kilometers throughout modern India, Afghanistan, and Pakistan. Over 1,056 Indus Valley Civilization urban centers and villages have been identified, 96 of these have been excavated. Many of the villages were primarily distributed within the wide area of the Indus and Ghaggar-Hakra Rivers and their smaller streams. The biggest cities, home to more than five million people were Rakhigarhi, Harappa, Ganweriwala, Dholavira, and Mohenjodaro.

The earliest settlement in the Indus Valley, known as Mehrgarh, was established around 7000 BC. The majority of the Indus Valley’s inhabitants were craftsmen and traders who predominantly lived in villages. As these villages were constructed from easily destructible materials that included mud and wood, their everyday way of life and much of their culture was lost with little or no trace over the ages. From archaeological digs, we have, however, come to realize that the  Indus Valley Civilization was an extremely sophisticated culture with a well organized way of doing things. Though heavily populated, its cities were not messy or disorganized, unlike most of its contemporaries in Mesopotamia and Egypt and, in some instances, would have put modern city planners to shame. The Indus Valley Civilization showcases the world’s first ever designed cities, organized in grid patterns, with streets traversing at right angles. These advancements in city planning were older than that of the Hippodamus of Miletus era, who many consider to be the “father of European urban planning.” The main streets of every city were built in a North-South line while secondary roads were laid out in an East-West line. Other than being really well designed, these cities had excellent drainage systems and all followed a similar pattern and layout. Even the bricks of the houses had the exact same dimensions.

The main roads were often up to 10 meters wide, leading archaeologists to believe that marketing activities took place. In Harappa, the streets were even paved with baked clay bricks to promote ease of movement for their ox-wagons and featured channels running alongside them to aid in the removal of excess surface water. In fact, their wastewater system was so innovative that they had completely separate channels lining the streets for wastewater and rainwater. The wastewater channels and drains were placed underneath the ground and could be opened through terracotta lids when they needed cleaning. Even the impressive aqueducts built by the Romans only followed thousands of years later. Excavations have shown that hygiene and sanitation was a top priority for the people of the Indus Valley Civilization, but also that their citizens had rather clean, healthy, and safe lifestyles. A vast amount of public baths, an outstanding water conservation system, water supply throughout every house, tidy sewage systems, and the impressive underground wastewater systems all highlight the role of hygienic practices in the lives of its citizens.

The waste bins that had been installed everywhere along the streets of Mohenjo-Daro are even more noteworthy. It demonstrates that even when looking at all other earlier civilizations, the society of the Indus Valley was far ahead of the times when it came to civic aspects. These waste bins were essentially brick containers and were used mainly for getting rid of any unwanted items and for garbage disposal by the citizens. Throughout the Indus Valley, all the metropolitan areas excavated to date have been intricate and organized with significant architectural design and highly developed Bronze Age techniques. However, despite these defining characteristics of social intricacy, nobody has ever uncovered evidence of the usual elaborate crypts, personal shrines, sizable temples, or typical royal residences that we’ve come to expect from these ancient civilizations. According to historians, this might mean that the Indus Valley Civilization was an impartial or a democratic society.

We have had almost a century of excavations and research and definitive proof for a dominant elite or even a class of managerial hierarchy has yet to emerge. The reason this can’t be found isn’t due to the Indus society’s lack of complexity and sophistication, but rather due to common misunderstandings and flawed assumptions about the wealth distribution, personal relationships, expertise, and urbanization of humanity’s ancient past. The civilization of the Indus Valley merely confirms that any form of a managerial or power elite is not a necessary precondition for social sophistication and complexity. The economy of the Indus Valley was focused on agriculture, trade, and commerce. From ancient writings, historians have come across numerous references made by  Mesopotamian (Sumerian) scribes in the Middle Bronze Age that referred to a flourishing trade with “Meluhha.” Meluhha was a prolific trading nation with strong economic ties to the Sumerians and transported large quantities of wooden products, as well as ebony. Sesame oil and other extremely valuable or luxurious items, such as lapis lazuli, were mostly shipped from Meluhha, which archaeologists believe was in fact the Indus Valley Civilization.

Apart from their thriving import and export trade, as demonstrated by the discovery of the massive Lothal Dockyard, the Indus Valley Civilization was the world’s first cotton producer with the earliest evidence and use of cotton discovered in Mehrgarh, dating back to the 6th century BC. Farmers in the Valley were also the very first to refine spinning and weaving techniques and fair trade was ensured by a system of weights and measures made from limestone, some of which have been uncovered in and around the Lothal dockyard. 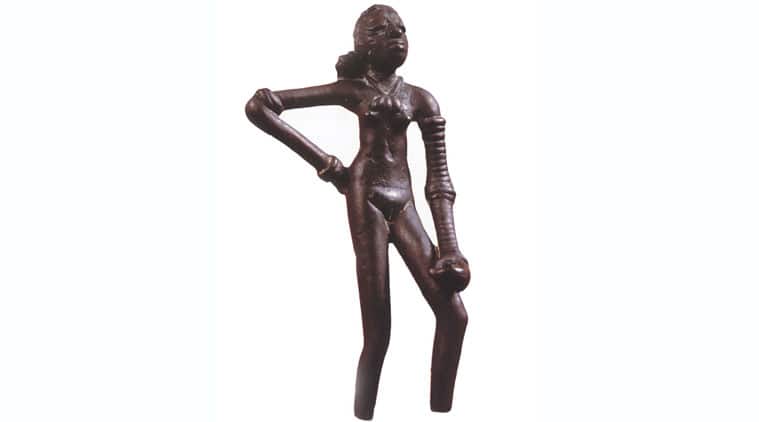 During the Indus Valley era, artists and their wares were quite sophisticated. Their artifacts demonstrate a high level of accomplishment in terms of both their aesthetic value as well as the wide variety of materials used including earthenware, copper, bronze, and other native rocks. They also perfected the early art of bead-making. There is a notable rise in artistic endeavors from the 3rd millennium BC and recoveries from the various archaeological sites have included numerous statues and sculptures, pottery, jewelry, clay figurines and so forth.

A very exciting discovery was the bronze sculpture of the “Dancing Girl“ as it demonstrates the expert knowledge the Indus people had in metal twisting and casting. It also points to the significance of dance as an art or entertainment form in their ancient society.

Famous archaeologist Sir John Marshall said, “When I first saw her, I found it hard to believe that she was prehistoric.” The Dancing Girl, as well as other marvelous works of art, were created using a now lost wax casting technique, recorded millennia before the art-forms of the Greeks. Harappa used to have very advanced granaries. In fact, the technology used to build them could only be found again in Rome, more than 2,800 years later. Built on raised platforms to ensure its safety during floods, the six granaries uncovered at Harappa were approximately 45 meters long and 15 meters wide.

The larger bricks were used in the construction of large, public buildings whereas the smaller bricks were being used to build the inhabitants’ houses. Whether the bricks were large or small they were made to exact dimensions in all the cities and followed a ratio of 1:2:4. It was with this architectural feat that they were able to build numerous dams and water reservoirs. These dams and reservoirs served a dual purpose. They protected the cities from floods but also provided water to the cities throughout the year, including the dry seasons.

3. Houses of the Indus Valley Civilization The architectural design and masonry of the Indus people were so developed that residents in the city of Harappa had two and three-story residences. These comfortable family homes also had spacious courtyards and easy to access flat terraces. Hardly any of the households in the Indus Valley seemed to have had windows looking towards their streets and would usually have only one entrance. Instead of looking towards the streets, the windows and doors of the houses would face inwards, towards the courtyard, as such they were actually intelligently designed and built to minimize noise and dust pollution inside the house.

These houses of Harappa were so wonderfully modern that many believe they were also the first in the world to have their bathrooms affixed to their homes. Almost all of the excavated residences have shown evidence of bathrooms, restrooms, toilets, and sewerage systems. As previously mentioned, every home also had access to running water throughout the year. The Indus Valley Civilization had a very thorough understanding of metallurgy. Their metal products were exported far and wide and were created using various metal products, including lead, copper, bronze, and alloys. They also showed remarkable skill and had a variety of techniques for the smelting of copper with a wide range of other metals.

Golden necklaces tinier than 0.25 millimeters in width have been excavated at the Lothal archaeological site. Other precious metal artifacts have also been uncovered in Rangpur, Mohenjo-Daro, and Harappa. Copper implements were produced using some sort of casting method, while bronze items were produced from single hammered sheets.

Their knowledge was in fact so advanced that they already evaluated the pureness of gold by means of the touchstone technique, a technique that is used in various parts of the world to this day.

1. The Indus Valley Script has Never Been Deciphered 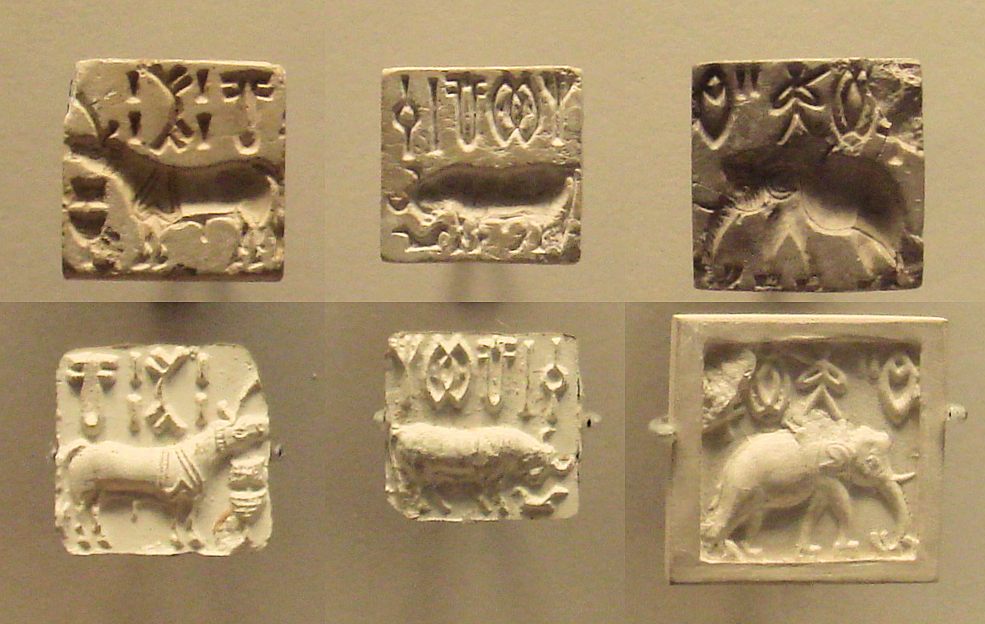 One of the main reasons we don’t know more about the Indus Valley Civilization is that their script has never been deciphered. Thousands of Indus texts have been discovered, mostly from Harappa and Mohenjo-Daro, but also in the faraway places of their trading partners all along the Persian Gulf and Mesopotamia. Most of them are inscribed on humble stone seals, around one inch squared, just above images of animals, such as an elephant, bull, or even a  unicorn-type creature. In smaller amounts,  inscriptions have also been found on clay tablets, metal objects, and pottery.

There has been a permanent $10,000 prize for anybody that uncovers an Indus text of more than 50 characters since 2004, that will remain valid throughout the entire life of the historian Steve Farmer, a staunch critic of the opinion that the Indus Valley Civilization was literate. Currently, many scholars are arguing for a prehistoric form of Dravidian, a group of languages that are today mostly found in small pockets around India and Pakistan – relatively close to the heart of the ancient civilization. Likewise, a few others favor an Indo-European language, linked to prehistoric Sanskrit, which encourages Hindu nationalist arguments to the ancient culture. However, until it’s fully deciphered, we may never be 100% sure.