Mankind has long been fascinated by achieving new heights. It’s literally a cliche statement that we’ll make. We look to the stars, we seek to rise above, we jump hurdles. But it’s worth noting there are plenty of things to find when we look down deep down. There are some remarkably deep places on Earth that plumb the depths of the world around us.

Most people know that the Marianas Trench is the deepest place in the ocean. But just how deep is deep, anyway? The whole thing isn’t one even, sustained depth. The deepest point is called Challenger Deep. It’s so deep, in fact, if you were to drop Mount Everest into it, it would completely disappear.

When Challenger Deep was mapped in 2010 it was measured to be 10,994 meters deep. If you’re not up to speed on metric, that’s 36,070 feet. Mount Everest is 29,030 feet high. If that is still too obscure then consider this: the Statue of Liberty is 310 feet tall. That means you could drop 116 Statues of Liberty into Challenger Deep and still have some room left over.

The pressure at the bottom of Challenger Deep is around 15,000 feet per square inch. That’s 1,000 times the pressure you’ll experience at sea level.

Because of the topography and the difficulty in measuring such a space, any measurements of the depth right now are mostly approximations of certain parts. Is it possible that there is a slightly deeper part that may be a few meters deeper elsewhere? Certainly. Regardless, it’s still the deepest part in the ocean.

There can only be one absolute deepest place in the world. It’s not the Marianas Trench, it’s not a sinkhole or a canyon. It’s not even a natural phenomenon. The deepest place in the entire world is located in the Arctic Circle in Russia. In a place called the Kola Peninsula you can find the Kola Superdeep Borehole. The hole is 40,230 feet deep. What exists at the bottom of a 40,000 foot deep hole? According to locals you can hear the screams of the damned straight from Hell.

Airplanes typically fly between 31,000 feet and 38,000 feet. The Superdeep Borehole has a couple thousand feet on that.The project to drill that deep was as monumental as the hole itself. It took Soviet Russia 20 years to get down that far and it wasn’t even fully finished as they had pans to go deeper.

The hole reached its current depth in 1989. It was supposed to be nearly 10,000 feet deeper by 1993. Unfortunately, science got in the way. The hole at those depths was far hotter than Soviet scientists had predicted. They planned on experiencing temperatures of 100 degrees Celsius but instead were dealing with 180 degree temperatures. It was deemed too dangerous to continue and the project was scrapped.

8. Mponeng is the Deepest Gold Mine in the World

People will go to any lengths for gold, and apparently depths as well. Mining is a dangerous prospect at the best of times, but the Mponeng gold mine took it to quite an extreme. The mine, located in the Gauteng province of South Africa, goes 4,000 meters (or about 13,123 feet) into the Earth. The depth is projected to reach 13,845 feet in the future.

7. Lake Baikal is the Deepest Lake on Earth Research has shown that there are over 117 million lakes in the world that are at least 0.002 square kilometers in area. That equals 3.7% of the world’s non-glacial land area. Suffice it to say there are a lot of lakes in the world. The deepest one of them all is Lake Baikal in Russia.

Located in southern Siberia and home to roughly 1,800 endemic plant and animal species, Lake Baikal is also 5,370 feet deep, which is equal to four Empire State Buildings plus a bit of extra space. Twenty percent of the world’s freshwater is located in the lake as well, and it’s been declared a Unesco World Heritage site, making it a truly unique place in all the world.

6. Bentley Subglacial Trench is the Lowest Point on Earth 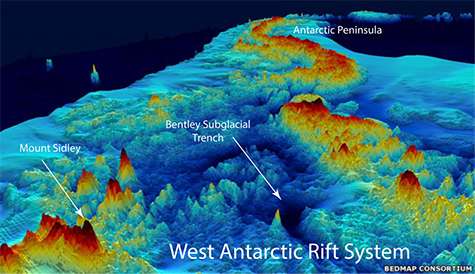 We measure height on land based on sea level. It’s good for letting you know if you’re in a dangerous spot at risk of flooding, or at a high altitude where the air gets thin. But because of the way topography works, there may not be many visual clues that you’re exceptionally high above or exceptionally low below sea level. Not until you get into the numbers. And with that in mind, the deepest place in the world below sea level is in the Antarctic. It’s called the Bentley Subglacial Trench and it’s 2,555 meters below sea level.

The trench is the lowest point on Earth that is not covered by an ocean. That comes with a caveat, though, as it is covered by ice. It’s also absolutely massive, covering an area the size of Mexico.

5. The Veryovkina Cave System is the Deepest on Earth

Spelunkers are always looking to find greater depths in cave systems and Russian explorers have been able to reach the greatest depths in human history in the Veryovkina cave system. After 50 years of exploration, the deepest point so far was reached at 2,212 meters below the surface. And it’s expected that they’ll still be able to go deeper.

The cave system descends almost straight down until it reaches 2,000 meters. At that point it heads out horizontally, which is where it’s still being explored. There are several branches that descend farther into the Earth that are awaiting exploration. The problem so far has been the serious dangers of checking out that depth with the risk of floods and cave-ins.

4. The Woodingdean Well is the World’s Deepest Hand Dug Well

Though we’ve reached some amazing depths through mechanical means with drilling, it’s worth noting that mankind can do some incredible things even without massive power tools. The Woodingdean Well was started back in 1858 in Brighton in the UK.

The plan was to create a water supply for a new workhouse. A well was dug down 400 feet, but they failed to locate the water table. Branches sent out in every direction also failed to find it after two years of digging. Rather than admit defeat, they kept digging.

Workers toiled 24 hours a day for years pulling out buckets of Earth by hand. The hole was only four feet wide, and at some point a worker even fell to his death. After four years, the well finally struck water at 1,285 feet deep. That’s enough to hide the Empire State Building, and it’s all hand dug.

Every few years the media will share a story of a new sinkhole that has opened up somewhere and swallowed a home or car somewhere. One opened in Rome in front of the Pantheon that was eight feet deep. A 30-foot deep one opened in North Carolina. The El Zacaton sinkhole in Mexico is 1,099 feet deep.

The hole is filled with warm water that smells of sulfur and is a rich shade of blue. Located in the middle of a jungle, it’s actually quite beautiful. As a result it has been a favorite spot of divers for years. The full depth was not fully discovered until the Deep Phreatic Thermal Explorer robot, designed by NASA to explore the moons of Jupiter, was used to reach the bottom.

2. Ontario’s Kidd Mine is the Closest You Can Get to the Center of the Earth

The Kidd mine is home to what is considered the oldest pool of water in the world. It may be over two billion years old. The mine itself is noteworthy because of where it exists in the world. Even though other holes are deeper, this mine actually gets you closer to the center of the Earth than any other place in the world, down at around 10,000 feet.

The water discovered at this depth is capable of supporting life as well, meaning there could be an ancient pool down there somewhere that gets closer to Jules Verne’s vision than we may have earlier imagined.

1. Tsangpo Canyon is the Deepest Land Canyon in the World Canyons are geographical wonders that attract tourists all over the world. About six million people visited the Grand Canyon in 2019. And while that may be America’s most famous canyon, it doesn’t win any depth records. That honor goes to the Yarlung Tsangpo Canyon in Tibet, which reaches a depth of 17,000 feet. It’s three times the depth of the Grand Canyon. Some places list the depth at over 19,000 feet.

The canyon is longer than the Grand Canyon at 300 miles long, and is legendary for being a treacherous path to try to follow. In 2002 it took a team 45 days to kayak the entire distance with the help of nearly 100 assistants, who stayed on land to provide support.