The practice of binding books in human skin, also known as anthropodermic bibliopegy, is not just the stuff of dark legends and horror fiction.  It was a real technique which, although frowned upon and considered ghastly by today’s standards, was officially practiced since the 17th century.  The technique gained considerable popularity during the French Revolution and among the upper classes in the 19th century.

The technique was used to bind such texts as anatomy books, last will and testaments, and judicial proceedings.  Of course, there have been many legends concerning this practice, almost all of which have cast it in an evil light.  But anthropodermic bibliopegy has a distinct history of being utilized for regular, and even mundane, texts.

Below I have arranged ten confirmed examples of anthropodermic bibliopegy, arranged in order of when the versions bound in skin were published.  Some of entries do not have a confirmed or recorded date of publishing, so I have had to take occasional liberties in making the list as chronological as possible.

10. A True and Perfect Relation of the Whole Proceedings Against the Late Most Barbarous Traitors, Garnet A Jesuit and His Confederates 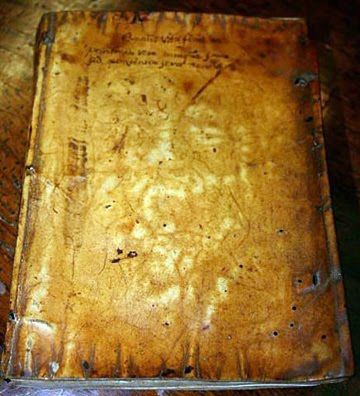 This book was a recollection of failure and subsequent arrest and execution of the Gunpowder Plotters.  The Gunpowder Plotters were a group of Catholic rebels who in 1605 tried to kill the Protestant King James I of England, his eldest son, and much of the English court and government.  Their plan was to explode gunpowder during a session of the Houses of Parliament.  The attempt, which was later named the Gunpowder Plot of 1605, failed.

The participants were all discovered and executed.  The most famous of these was Guy Fawkes.  However, one of his co-conspirators was Father Henry Garnet, the head of the Jesuits in England.  It was his flesh which was used after his execution to bind this book.  The book has a Latin inscription on its cover which, when translated, reads “severe penitence punished the flesh.”  This is one of the most famous examples of anthropodermic bibliopegy since many believe that you can make out the Father’s face, forever twisted in agony, on its cover.

In the rare book collection at the Langdell Law Library at Harvard University, there sits a strange tome several centuries old.  The book is entitled Practicarum Quaestionum Circa Leges Regias Hispaniae.  The text is a treaty of Spanish law.   On the last page, a  faint inscription can be made out.  It reads:

“The bynding of this booke is all that remains of my deare friende Jonas Wright, who was flayed alive by the Wavuma on the Fourth Day of August, 1632. King btesa did give me the book, it being one of poore Jonas chiefe possessions, together with ample of his skin to bynd it. Requiescat in pace.”

The Wavuma are believed to be an African people that possibly existed in modern day Zimbabwe.  This is a notable example of anthropodermic bibliopegy, as it is proof that the practice was sometimes used for memorial and sentimental reasons instead of for sheer macabre titillation.

In 2006, a 300-year-old ledger was discovered in downtown Leeds, England.  It was found in the wake of a bungled burglary attempt.  Not much is known about this ledger.  However, it is of some curiosity that this ledger was written in French and dated back to the 1700s. 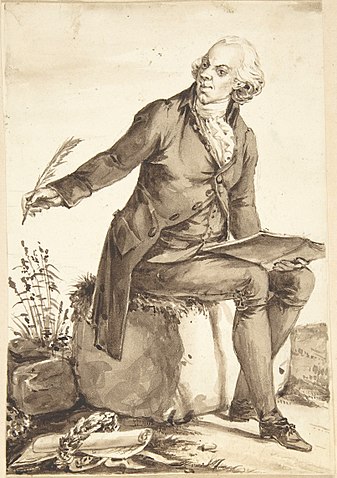 Jacques Delille was a famous French poet who also excelled at translations.  One of his most famous works was a verse translation of Virgil’s Georgics.  Upon Delille’s death, someone stole some of his skin while he was laying in state.  The stolen skin was then used to bind his translation of Georgics.

Samuel Johnson was one of the most important writers and lexicographers of the English language.  A Dictionary of the English Language is widely considered to be one of his greatest works.  First published in 1755, Samuel Johnson’s dictionary listed 40,000 words, making it the most extensive work of its kind up to that point in history.  In 1818, a criminal named James Johnson was hung in Norwich.  His skin was then used to bind a copy of Samuel Johnson’s dictionary.  There is no known connection between the two men. 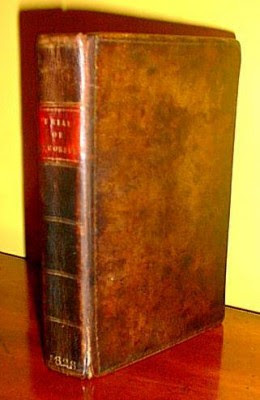 The Red Barn Murder was an infamous killing that took place in Polstead, Suffolk, England in 1827.  The case started when a young woman named Maria Marten had local rogue William Corder’s child out of wedlock, an offense that could lead to persecution from parish officers.  The two arranged to meet and elope at a local Red Barn.  However, upon meeting, Corder shot Marten and fled.  Marten’s remains were later discovered and identified when her stepmother started having dreams about her being murdered and buried in the Red Barn.  The murder and subsequent trial and execution of William Corder became a national sensation, inspiring songs, plays, and ballads that have survived to this day.  After Corder was executed, his body was dissected and examined by medical professionals.  His skeleton would become a teaching aid in the West Suffolk Hospital.  His skin was tanned by a surgeon named George Creed and used to bind the account of the infamous murder.  The book was inscribed by Creed:

“The Binding of this book is the skin of the Murderer William Corder taken from his body and tanned by myself in the year 1828. George Creed Surgeon to the Suffolk Hospital.”

The account is now held at Moyse’s Hall Museum.

4. Narrative of the Life of James Allen, alias Jonas Pierce, alias James H. York, alias Burley Grove, the Highwayman, Being His Death-bed Confession to the Warden of the Massachusetts State Prison 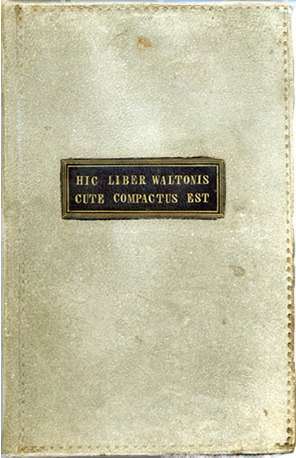 James Allen was an early 19th century Massachusetts highwayman who had an unusual last request upon his death.  Allen had been put in prison as the result of trying to rob a man named John A. Fenno on the Massachusetts Turnpike.  During the attempted robbery, Fenno resisted Allen’s attacks, even brushing off a gunshot wound.  Not only did he stop Allen from robbing him, Fenno helped bring Allen to the authorities.  Nearing his death, Allen requested that a copy of his memoir which had been transcribed by the prison warden be bound in his skin and given to Fenno.  The cover of the book has the inscription “Hic Liber Waltonis Cute Compactus Est” which translates to “This book by [Allen] bound in his own skin.”  The book has since been donated by Fenno’s descendants to the Boston Anthenaeum.

3. The Poetical Works of John Milton

In 1830, Roborough ratcatcher George Cudmore poisoned his wife with arsenic via a roasted apple and milk.  Cudmore was arrested and later hanged at the Devon County Goal at the Lent Assizes.  After his death, he was taken to an Exeter hospital for dissection.

While at the hospital, a piece of Cudmore’s skin made its way into the possession of Exeter bookseller Mr. W. Clifford.  The skin was then flayed and tanned into a cover for a copy of The Poetical Works of John Milton.  The front of the book bears an inscription that mentions Cudmore and the crime that led to his execution.  The book is now kept at the Westcountry Studies Library in Exeter.

Camille Flammarion was a prolific French astronomer and author who gained many fans during his day. One of his more “devoted” fans was a French countess who unfortunately died young of tuberculosis. The two never met in real life. However, she had a large piece of skin cut from her back upon her death and donated to Flammarion.

She asked Flammarion to use it bind a copy of his next book. Incredibly, Flammrion consented. As a result, the first copy of his next book, Terres du Ciel, was bound with her skin.  The book bears a golden inscription on its front cover: “Pious fulfillment of an anonymous wish/ Binding in human skin (woman) 1882.” The book now sits in the library of the observatory at Juvisy. 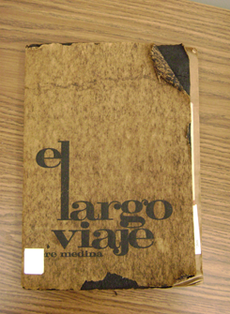 “The cover of this book is made from the leather of the human skin,” it reads. “The Aguadilla tribe of the Mayaguez Plateau region preserves the torso epidermal layer of deceased tribal members. While most of the leather is put to utilitarian use by the Aguadillas, some finds its way to commercial trade markets where there is a small but steady demand. This cover is representative of that demand.”

A topic that gets under your skin? No?
If you like this then you must be a little disturbed, which means you will love this article about forced cannibalism.
Other Articles you Might Like
Liked it? Take a second to support Toptenz.net on Patreon!