Most of us probably played with Lego’s as kids and built amazing structures to show to our friends, parents or anyone else who would pay attention. However, while most of us became adults and continued our love of building by playing games like Minecraft, some continued to play with Lego’s well into adulthood. With all the resources of an adult some of these people put their mind to the task of making insane constructions out of Lego’s, and building all the things they dreamed of as a child but were never able to put together.

One man had a dream, to build a magnificent chandelier

without spending very much money. As luck would have it he had an incredible wealth of Lego pieces, including lots of transparent, Lego window pieces. He put all of these pieces together into a massive chandelier design that literally took thousands of Lego’s. The chandelier is said to be massive in size, and quite stunning even though it isn’t made of the usual crystals that make up a chandelier. The structure is easily bigger than the man who built it and must have taken incredible pains to complete.

9. Six foot replica of the Tower of Mordor. 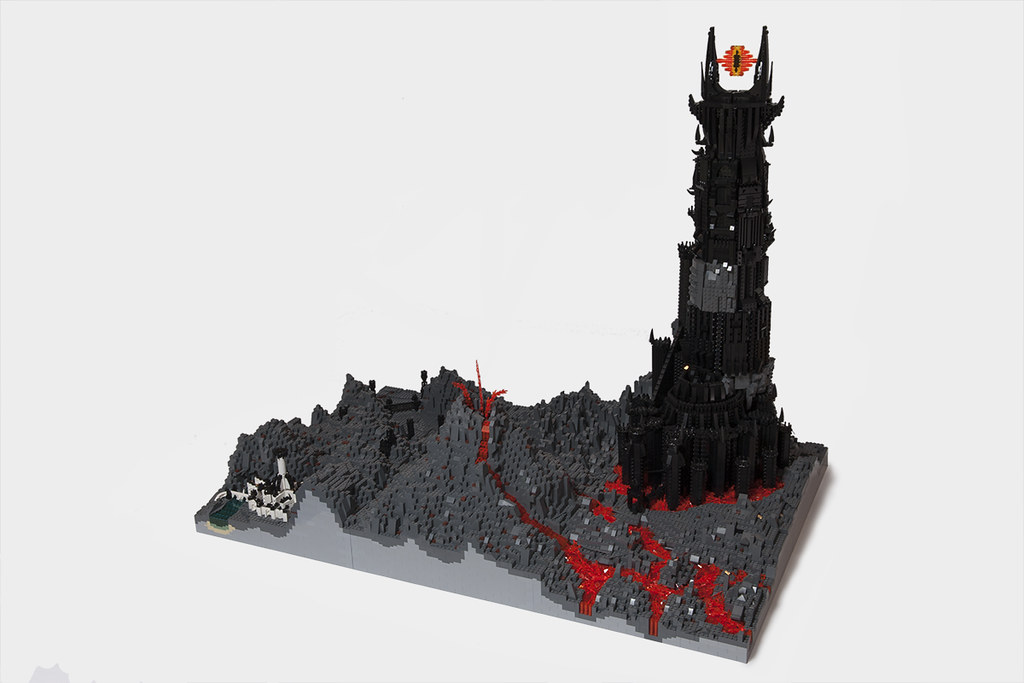 One man named Kevin Walter is a really big Lord of the Rings fan, he also happens to really like Lego’s and clearly was not satisfied with the Lego set options available. He decided to deal with this problem himself by building a gigantic replica the height of an average man of Barad-dur, the headquarters of Sauron from the Lord of the Rings. Apparently the structure took over 50,000 pieces to construct, which is simply insane and was the product of almost three months of work. The detail is extremely impressive, especially when it comes to the eye of Sauron. 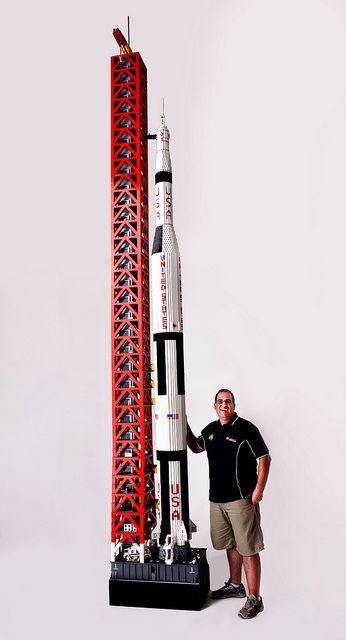 The Saturn V Rocket was used to launch satellites in the 1960’s through 1970’s and separated into three parts after it launched. One man had a hobby, and that was using Lego’s to build a replica of this rocket that is nearly 20 feet tall. This particular structure went even further than the last, requiring 120,000 separate Lego’s to put together, and took him about 250 hours. His incredible replica is supposedly the largest construction made of Lego’s in the continent of Australia. Last year the Lego structure was available for viewing in the Town Hall in Melbourne, Australia. Someone decided that the world just wasn’t right without a full size, near perfect replica of an F1 Ferrari built entirely out of Lego’s. Realizing the serious Lego Ferrari deficiency, no less than sixteen Lego experts worked together to design and assemble this bad boy. The design alone took about half a year to complete and then other ten days working around the clock with a team of people to put it all together. The amount of Lego’s required was in the hundreds of thousands. The replica is so detailed that the seat can actually fit a real person quite nicely and the steering wheel is a perfect match, except that it’s made of Lego’s. 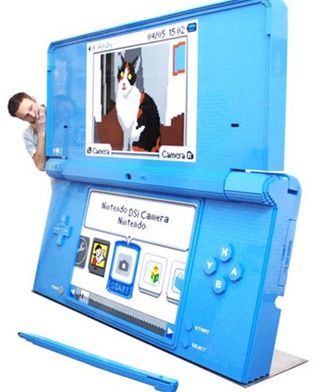 For some reason someone got it into their head that the only thing better than a handheld, working Nintendo DSi was a replica larger than a human that doesn’t function as a video game system and could easily crush you to death if it fell on you. This behemoth is took over 50,000 Lego pieces to construct and weighs about two hundred and fifty pounds. For the cynical among us, this wasn’t just some crazy guy’s brainchild. Apparently Nintendo of America commissioned him to do it, which means this seven foot wide gigantic pile of toys made to look like another toy is essentially a marketing ploy. 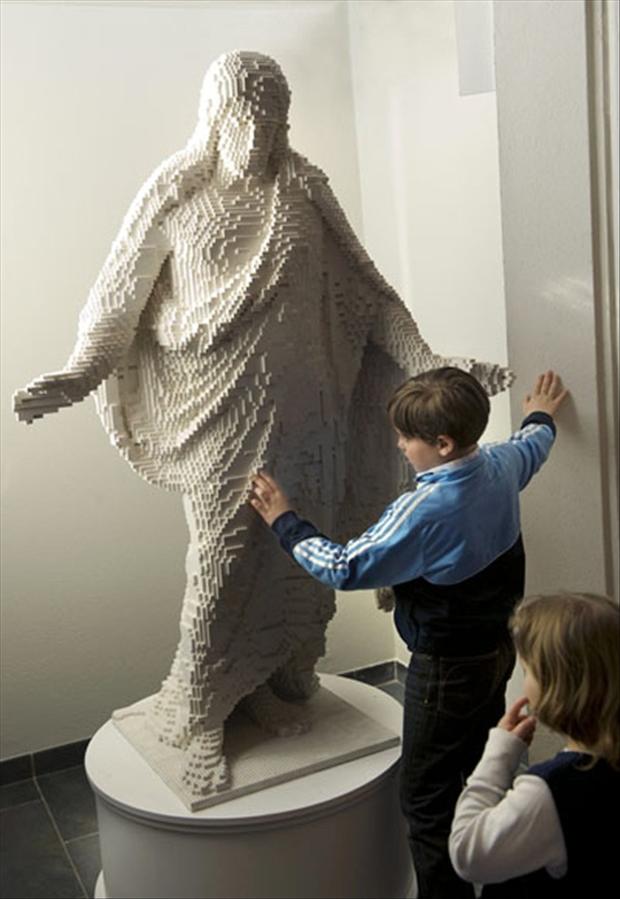 One church in Sweden made the news after they unveiled a life-size statue of Jesus made entirely out of Lego bricks. The church has no desire to sell their creation, which is supposed to be based on a form of Jesus at the resurrection. The church members donated a wealth of Lego blocks to make this project happen, to the tune of about 30,000 total pieces. The people who put it together put in about a year and a half worth of work to get the statue properly assembled, which makes the project sound ridiculously difficult when you realize there were forty people working on it.

To advertise a new section of Legoland in Windsor called Kingdom of the Pharaohs, an enormous 16 foot statue of the Pharaoh was floated up the river Thames. Overall this statue was taken by boat almost 1500 miles, all the way from the Czech Republic to Legoland Windsor, its final destination. This statue took an entire team of experts almost half a year to put together and took a couple hundred thousand Lego bricks to build and quite literally weighs a ton. The new section of the theme park cost about three million euro’s to design and build and is already open for business.

While there are many insane structures made out of Lego’s, one man decided to go much, much further than most and built a real working house out of them. The designer, along with one thousand people who volunteered to help, spent an incredible amount of time to put this behemoth together. Unfortunately this story doesn’t end happily. It turns out no one wanted a house made out of three million Lego bricks. At first Legoland was considering taking it but decided it would just be way too expensive to move the hulking structure. Also, it turns out that the proper planning permits had not been in order, which means that the house was torn down. Happily though, the bricks were saved and given to charity.

A 36 year old IT consultant decided that he needed to take his hobby to the next level, and by the next level we mean making a Lego structure so detailed and enormous that you could crush a person with it. He decided to make a replica of the aircraft carrier USS Intrepid, a 23 foot replica. However, it gets much more insane than that. Not only is it 23 feet long, it is also over 350 pounds and required more than 300,00 pieces to put together. Designing and building the carrier took him hundreds of hours and he detailed it down to the last lifebelt.  His explanation for why he took on this insane project was that he played with Lego’s as a kid.

This structure is said to be the largest airplane made out of Lego’s in the world, though we aren’t sure how many enormous Lego airplanes there are to compare it to. This Lego replica is designed after the A380 Airbus, which is supposed to be the biggest plane in the world. The structure is about seven feet long, and six feet wide. Not only that but the structure can be split in half, at which point you can get a look at the incredibly insane amount of detail put into all three stories of this gigantic structure. The detail is so insane he didn’t forget anything, landing lights, air brakes, landing gear, fuel tankers, baggage carts you name it. The designer of this airplane replica went all out and took about 75,000 pieces to construct; the project took him the better part of a year.