While most people think of superheroes when they hear the term “comic books,” it turns out that one of the most popular and resilient comic genres revolves around non-supervillainy crime.  Dating back to the early 20th century, crime comics have been a mainstay of the medium. Suave private eyes, pulp anti-hero avengers, and neo-noir police procedurals make up a mere fraction of this influential genre.

I have listed ten of the most famous, most influential, and most enduring crime comics in history, in chronological order based on their first published appearance. 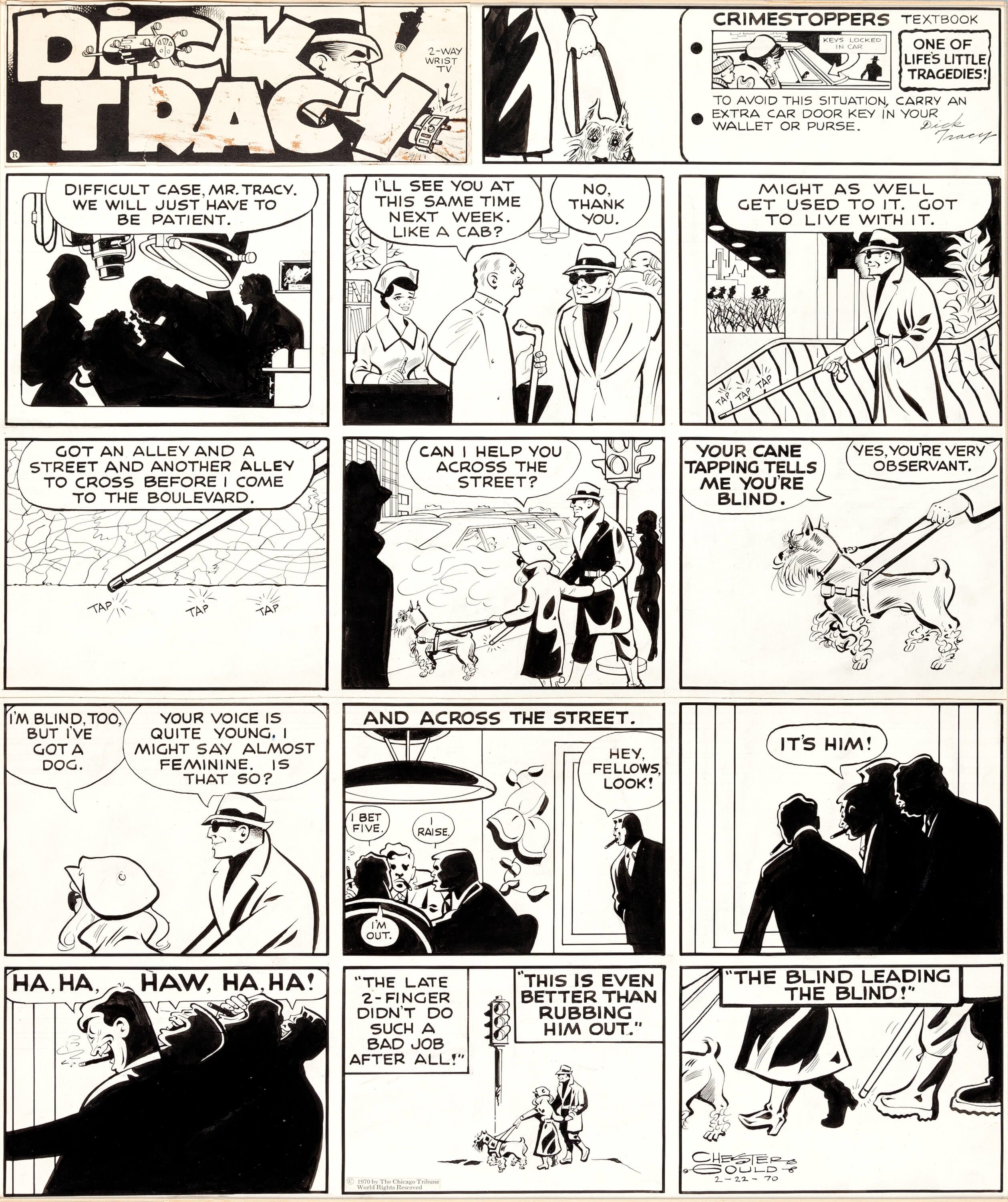 Perhaps the most endearing and popular entry on this list, Dick Tracy was a comic strip police detective that became a cultural phenomenon. Appearing in one format or another since 1931, Dick Tracy has been a star of radio, cartoons, television, and films. But he first appeared in the pages of the Detroit Mirror.

Created by Chester Gould, Dick Tracy helped pioneer the police procedural genre. While Tracy could hold his own in a gun-fight, he excelled in forensic

science and investigation skills. The character has been re-invented several times, once even being re-imagined as a sci-fi character in space. Fighting against such memorable villains as Flattop Jones, Tracy lived in a world of chaos, violence, and crime that was simply unforgettable. It will be a long time before the world sees the last of this legendary detective, and his trademark yellow trench coat.

Dick Tracy may have debuted eleven years earlier, but Charles Biro and Bob Wood’s Crime Does Not Pay is considered to be the first true crime series. Featuring graphic depictions of drugs, sex, and violence, Crime Does Not Pay recounted the exploits of famous real-life gangsters and criminals. The series was presented as an anthology, with many different stories being introduced by “Mr. Crime,” a forerunner of EC Comics’ various “Horror Hosts.” The series was so successful that it spawned a slew of imitators from numerous different companies.

However, despite emphasizing the futility of crime, Crime Does Not Pay was one of the victims of Dr. Fredric Wertham’s crusade against comic books as a cause of juvenile delinquency. Thankfully, Dark Horse Comics has begun to release collections of classic Crime Does Not Pay comics, for future generations to enjoy.

What would a list of classic genre comics be without an EC Comics anthology? While many comic book fans have at least heard of EC Comics various horror titles like The Vault of Horror and Tales from the Crypt, fewer are aware of its fantastic crime anthology, Crime SuspenStories.

Heavily influenced by film noir, Crime SuspenStories featured artwork by many of the industry’s greatest talents, such as Harvey Kurtzman of Mad Magazine, Johnny Craig (who drew the infamous, and very-NSFW, cover of Crime SuspenStories #22 that was displayed at the Kefauver Hearings), and George Roussos, one of Jack Kirby’s greatest Silver Age inkers. Add classic writing from Craig, William Gaines, and Al Feldstein, and you have the makings for an absolute classic series.

Unfortunately, much like Crime Does Not Pay, as well as EC Comics’ horror anthologies, Crime SuspenStories was a casualty of the mid-50’s comic book witch-hunt.

I previously mentioned Aln Moore and Eddie Campbell’s From Hell on my list of non-superhero horror comics. But I felt that it deserved inclusion on this list as well. From Hell is essentially a historical reconstruction of one of the most famous serial killers of all time: Jack the Ripper. Although Moore’s choice of the Ripper’s identity, Sir William Gull, has since been debunked, From Hell still features mind-numbingly meticulous research into the actual murders, the subsequent police investigation, life in late-19th century London, and Masonic traditions in both architecture and regular society. Of particular note are the grisly, yet anatomically and historically accurate, murder scenes where Sir Gull, Queen Victoria’s royal physician, eviscerates his victims. 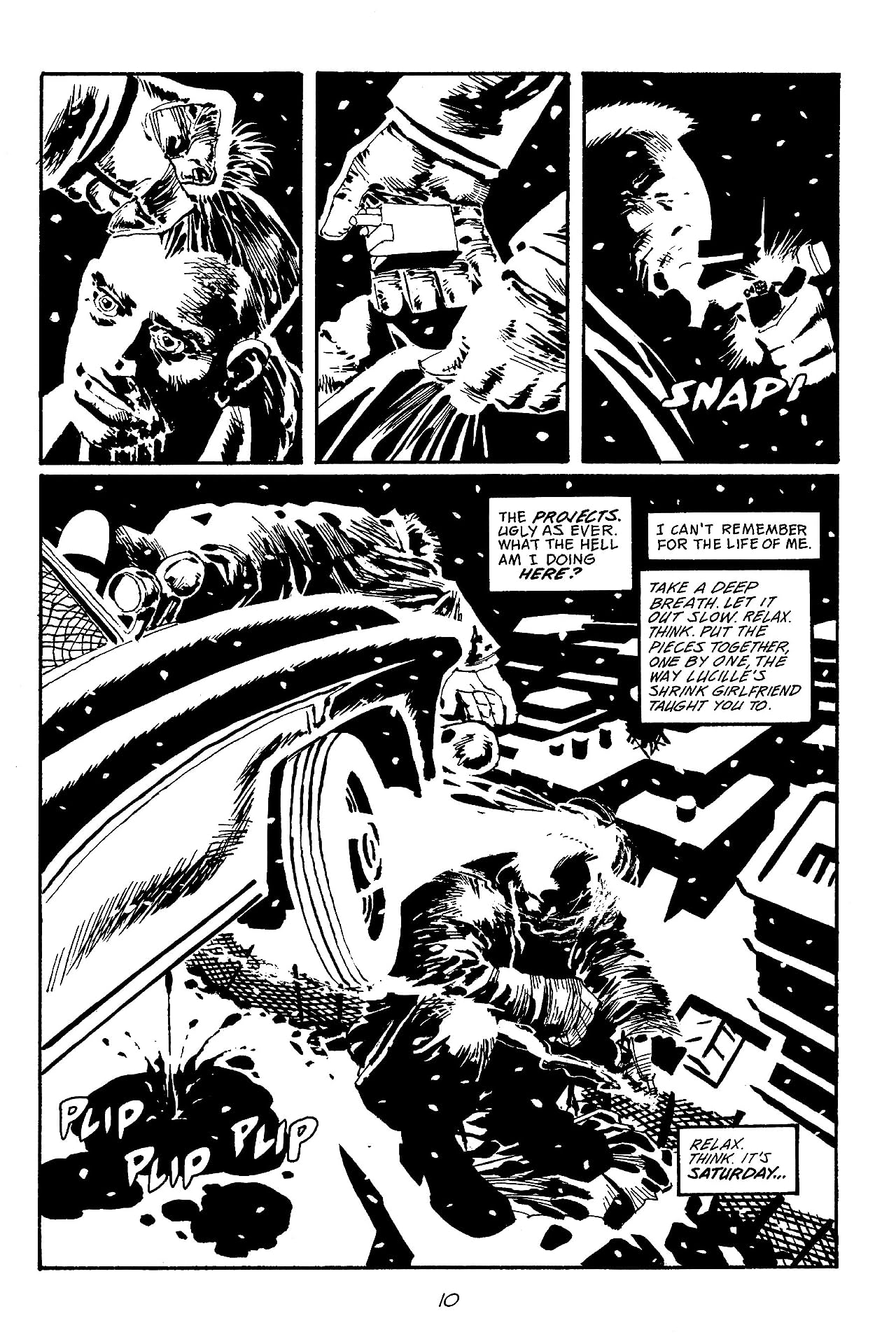 If you are only familiar with Robert Rodriguez’s 2005 film adaptation of Frank Miller’s legendary Sin City series, then you owe it to yourself to explore the original comics. Serialized by Dark Horse Comics, Sin City is a collection of stories that take place in Basin City, better known by the series’ eponymous moniker. The crime rate in Basin City is so outrageous that their police function more like a paramilitary unit. Corruption and graft is a way of life. There are many different characters and locations that make up the narrative tapestry of Sin City, and none of them are cute or fluffy in any way. Frank Miller uses an incredibly stark style that emphasizes high contrasts, shadows, and black-and-white artwork. Sin City manages to be a loving tribute to classic pulp fiction, while simultaneously standing as the genre’s next evolutionary step. 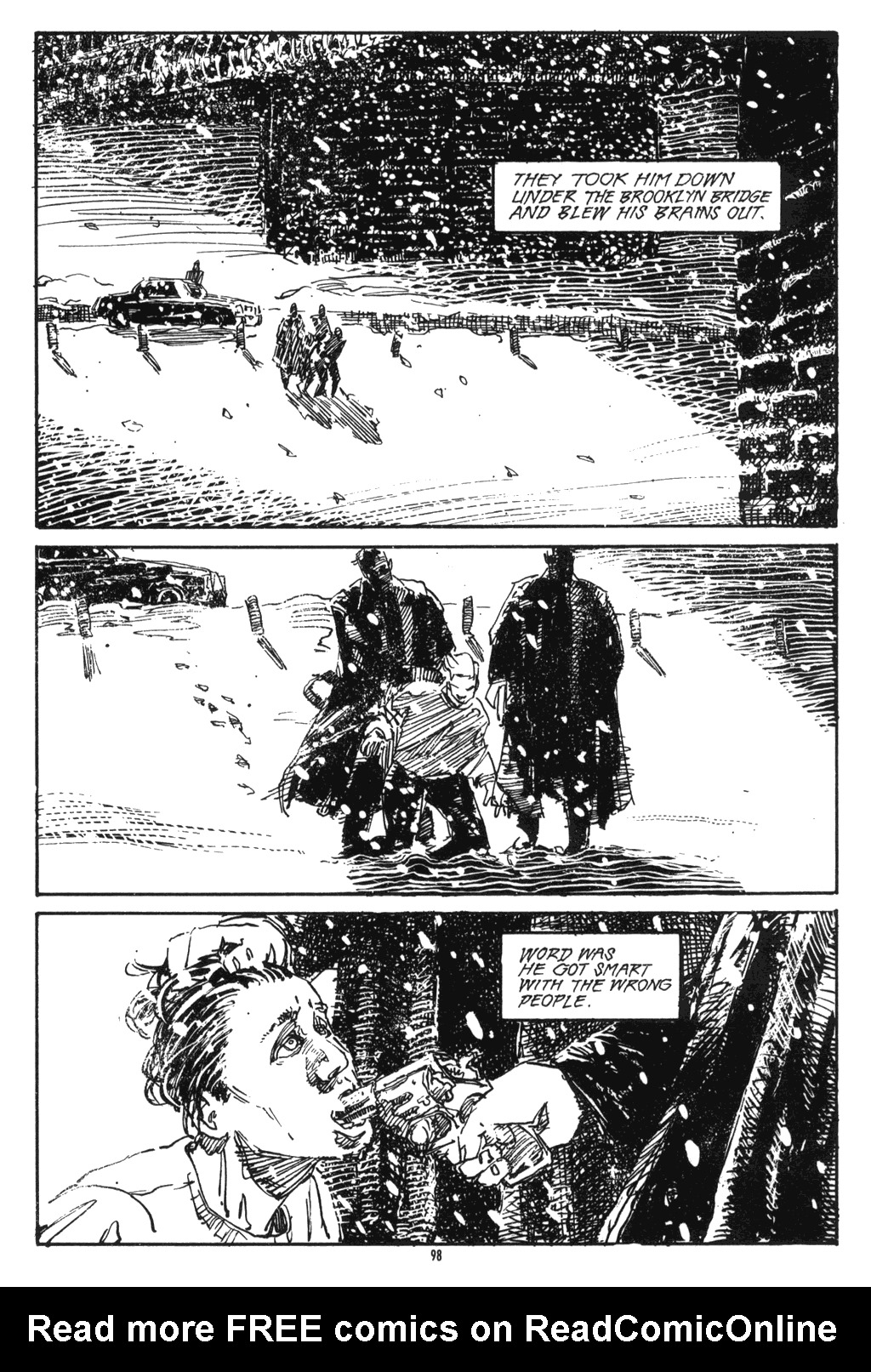 Many people may be familiar with David Cronenberg’s film A History of Violence. What they may not know is that it was based on a graphic novel of the same name, by John Wagner and Vince Locke. Both the comic and film follow small-town Michigan cafe owner Tom McKenna, a quiet man who, in an uncharacteristic outburst of violence, manages to defend his store from a group of robbers. However, the unwanted media attention results in the arrival of a group of gangsters who insist that they know Tom, and that they have a serious score to settle.

For those who have only seen the movie, it needs to be pointed out that it and the comic part ways at this point. In the movie, Tom was a gangster from Philadelphia, who gave up the criminal lifestyle. In the comic however, Tom goes on the run after trying to steal from the New York City Mafia. Both the movie and the comic are fantastic, though I would recommend the comic version, due to an incredible twist that comes near the end that was omitted from the film.

One of the most famous names in modern superhero comics is Brian Michael Bendis. While most famous for his sprawling runs on Ultimate Spider-Man, Daredevil, and The Avengers, Bendis got his start writing crime comics. He wrote many phenomenal ones, but I’d like to focus on one in particular: Torso. Co-written with Marc Andreyko, and based on the true story of the Cleveland Torso Murderer, Torso is a stunning and chilling examination of one of America’s great unsolved crime sprees. Operating around Cleveland in the 1930s, the Torso Murderer is believed to have decapitated 12-15 victims. As his name suggests, he only left only his victims’ torsos intact.

Torso is told from the point of view of former Untouchable Eliot Ness, who became Cleveland’s Safety Director shortly before the murders started to be discovered. Torso won Bendis the 1999 Eisner Award for “Comic Book Excellence, Talent Deserving of Wider Recognition.” 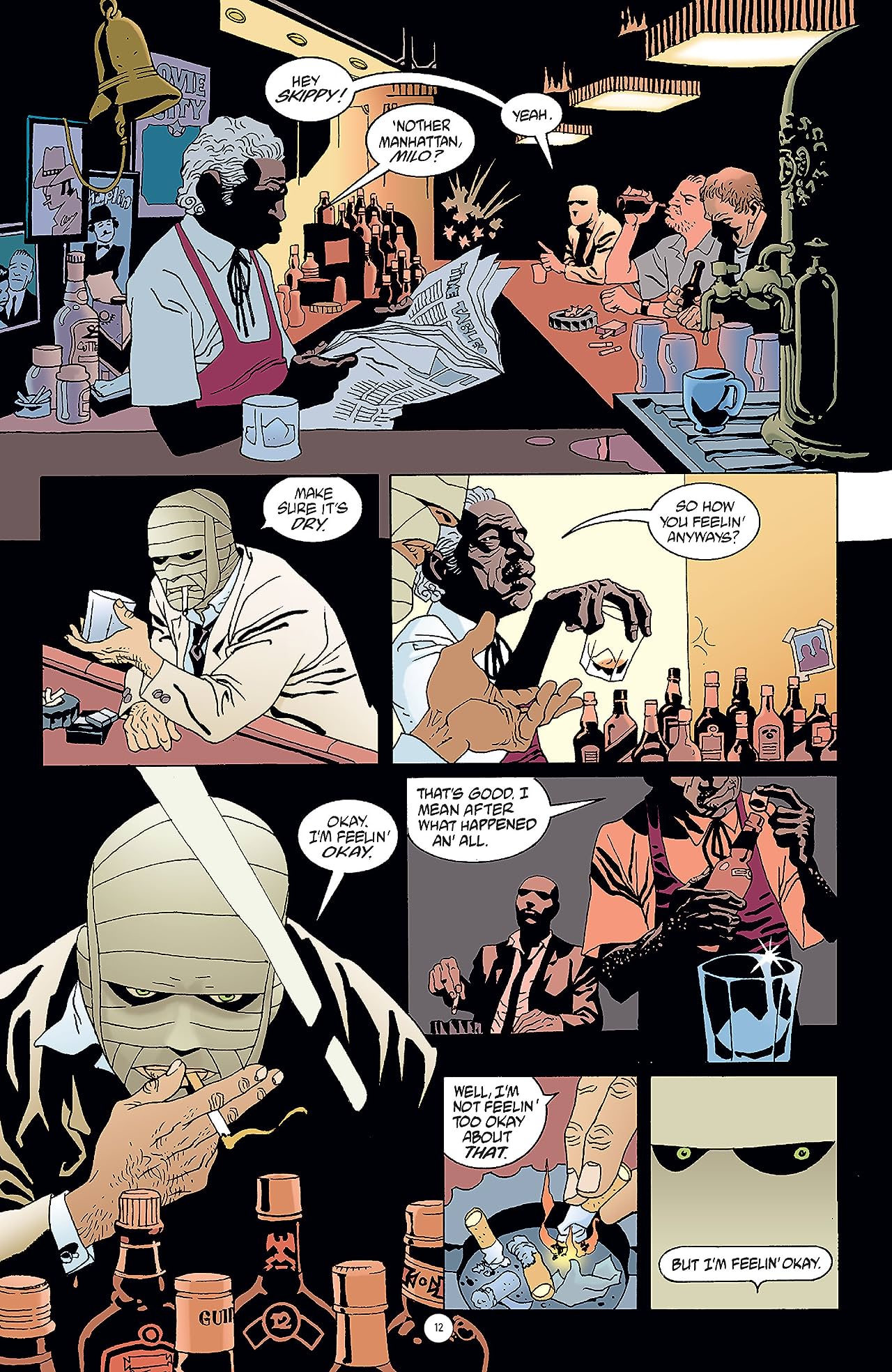 Few modern crime comics have been so well-received and admired as Brian Azzarello and Eduardo Risso’s 100 Bullets.  Running for a staggering 100 issues, the series began with a very simple premise: a strange man named Agent Graves approaches people who have been victimized in one way or another. He gives them a handgun, 100 bullets, evidence that one person is responsible for all their woes, and a simple message. The message is that the bullets are completely untraceable. Any law enforcement organization will automatically stop the investigation of a crime committed with one of these bullets. Whether or not these people use the 100 bullets to take revenge is up to them. Beginning as an episodic series, it eventually evolved a massively over-arching storyline, one that is still winning over new fans years after it concluded. 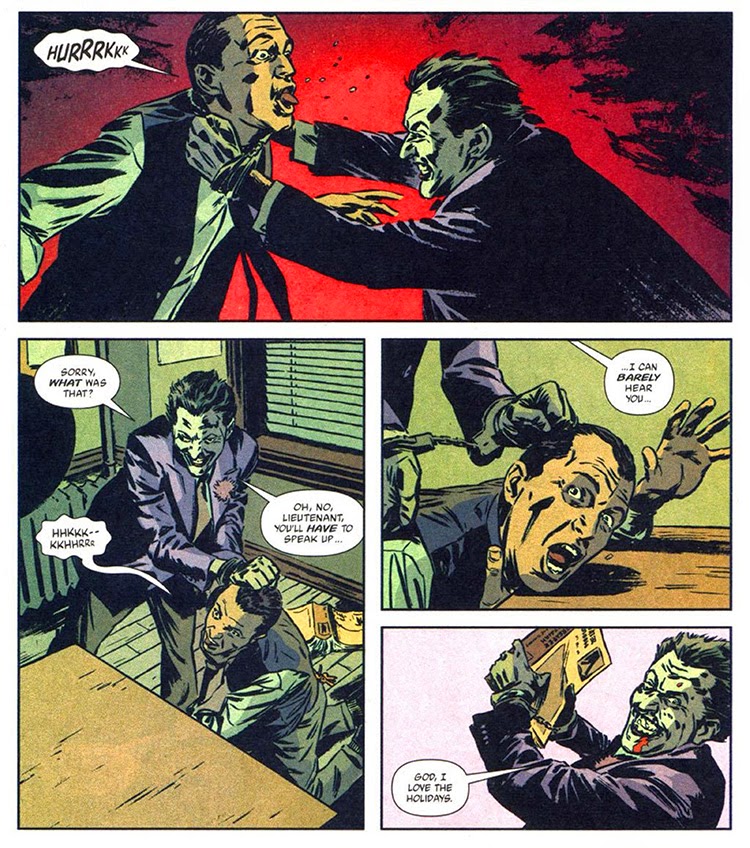 Have you ever wondered what the Gotham City Police Department do when Batman isn’t around? Gotham Central answers that question by delving into the lives of Gotham City’s police officers. We watch such classic supporting characters as Commissioner Gordon, Harvey Bullock, Renee Montoya, and Crispus Allen get their turns in the spotlight.

The comic does a wonderful job portraying the GCPD as hardworking cops, who unfortunately have to deal with crazed psychopaths like Two-Face. How do you react when your partner is killed by Mr. Freeze? What happens when your primary suspect for a murder case is Catwoman? And finally, what happens when you realize that you are in way over your head, and have to turn on the Bat-Signal to call for…him? Veteran writers Ed Brubaker and Greg Rucka, along with artist Michael Lark, shine in one of DC Comics greatest unsung masterpieces.

When most people think of crime comics, they usually picture dark, gritty streets, and office buildings drowning in shadows. Writer Jason Aaron, and artist R.M. Guera, decided to throw all of these pre-conceptions out the window with his Vertigo series Scalped. Set in the Prairie Rose Oglala Lakota Indian Reservation in South Dakota, the series focuses on Dashiell Bad Horse, an undercover FBI agent investigating the murder of two FBI agents. But the actual investigation is only one part of Scalped. The series also examines the cultural deterioration of the Oglala Lakota, as they suffer extreme poverty, alcoholism, and crime on the Reservation. The series recently ended with issue #60, to nearly-universal critical acclaim. As cheesy as it sounds, Scalped is truly the crime comic of the future.