Certainly to classify the top ten most rare flowers isn’t easy especially since, according to scientists, more than 270,000 types of flowers exist (which doesn’t include the 10 to 15% of unclassified flowers in remote regions of the world).  Of those that are rare, here are not only the top ten rarest flowers, but the ten with unquestionably the most interesting stories.

Only found in Gibraltar, the Campion was once thought to be extinct by the scientific community in 1992, when all traces of the plant vanished.  Then in 1994, a single specimen was discovered by a climber hiking on the high cliffs of Gibraltar.  It was propagated at the Millennium

Seed Bank and specimens are now grown at the Almeda Gibraltar Botanic Gardens, as well as at the Royal Botanic Gardens in London.  For hanging in there on the solitary cliffs of Gibraltar waiting to be found, the Campion flower comes in at number 10.

The Jade Vine, known for its spectacular blue-green, claw-shaped flowers, produces a hanging inflorescence of color seldom seen in any other flower.  The flower is pollinated by bats which will hang upside down to drink the nectar.  These rare flowers are now hardly seen in the wild and are believed to be threatened by the deforestation of their natural habitat in the Philippines.  For its beauty to botanists and bats alike, the Jade Vine comes in at number 9. 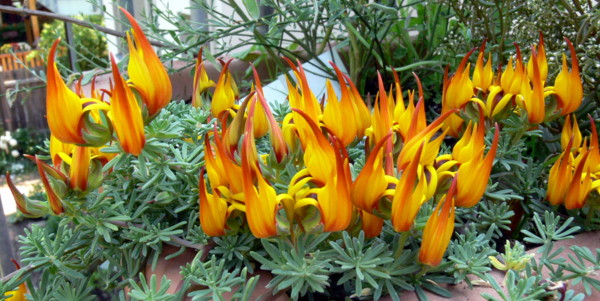 Classified as exceedingly rare since 1884, the Parrot’s Beak flower is believed to be extinct in the wild, though some individuals believe it may still be alive.  The plant is native to the Canary Islands and is believed to have been originally pollinated by sunbirds which have long gone extinct.  Experiments have been done to see if the flowers could have found new pollinators but, as of 2008, none of these experiments have been successful.  For all the efforts made to take this one back home, the Parrot’s Beak flower makes number 8 on our list of the rarest flowers. You may have seen Chocolate orchids, but have you ever seen or gotten a whiff of Chocolate Cosmos?  It is a flower native to Mexico that has been extinct in the wild for over 100 years.  Still, the species survives as a single, non-fertile clone created in 1902 by propagation.  The flowers are a rich deep-brown color and grow to about 3-4 cm in diameter.  As the name suggests, Chocolate Cosmos emit a delicious vanillin fragrance in the summer (also found in vanilla beans, some coffee beans and some cocoa beans).  For being so rare and almost sweet enough to eat, the Chocolate Cosmos comes in at number 7. 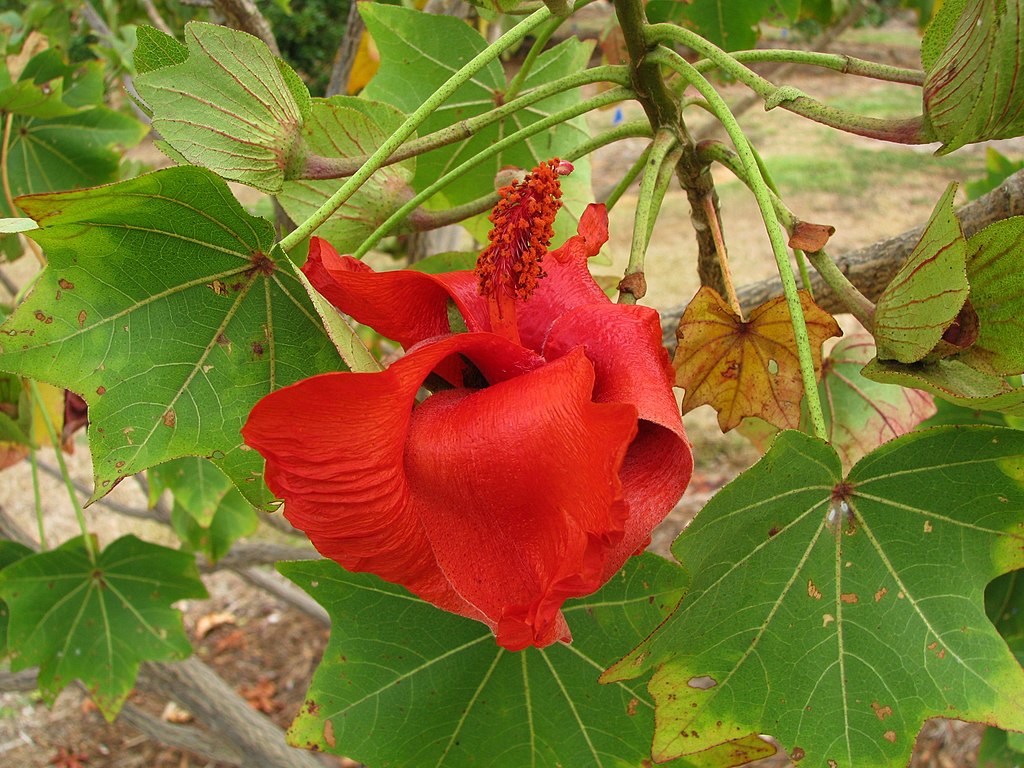 Another rare flower comes from a tree in Hawaii.  Discovered in 1860, the Koki’o tree has proven difficult to propagate and, in 1950, was deemed extinct.  However, 20 years later a sole survivor was found, but was destroyed in a fire in 1978.  As luck would have it, one of the branches was saved and grafted into 23 different trees in various places in Hawaii.  The tree grows to 10-11 meters high and has hundreds of bright, red flowers that mature trees produce annually.  As a flower so willing to adapt, the Koki’o flower comes in at number 6. 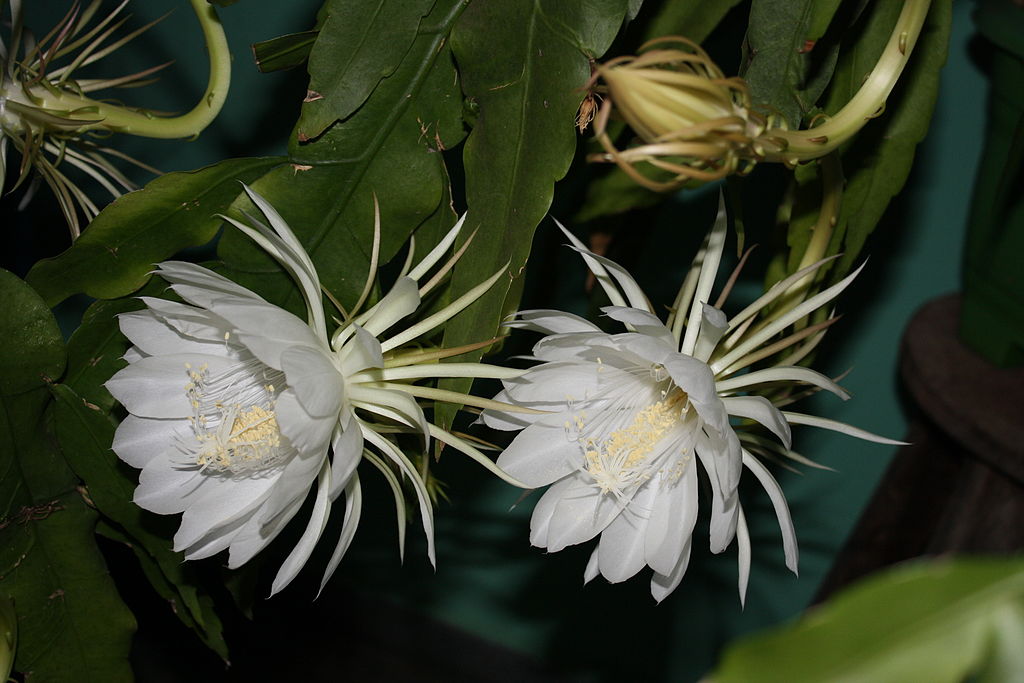 This flower is easily cultivated, but is rare for the sole reason that it blooms so rarely.  They are found in Sri Lanka in the wild and have spiritual significance to Buddhists.  When they do bloom, they bloom only at night and then mysteriously wither before dawn.  According to Buddhists, it is believed that when the flower blooms, the Nagas (semi-mythical Sri Lankan tribes) descend from their heavenly abodes to present the flower as a gift to Buddha.  The flowers are oddly scented and produce delicate, white flowers.  The flower also has a rich history in Japan where its name can be translated as “Beauty under the Moon.”  For a flower so shy about blooming and so highly thought of, they take notice on the list at number 5.

Not only rare but fascinating, the Ghost Orchid is a plant that was presumed to be extinct for almost 20 years and only recently materialized again. The plant is so rare because it is near-impossible to propagate. It has no leaves and does not use photosynthesis to manufacture its own food.  It, like the Lady Slipper mentioned below, needs a specific fungus in close contact with its root system to feed it.  The Ghost Orchid can live underground for years and is only found in forests in Cuba, and another variety, in Florida.  The flowers emit fragrant odors and bloom between the months of June and August.  In Cuba they grow on cypress trees in which they appear to float like ghosts, thus the name.  They can only be pollinated here by the giant sphinx moth and if their seeds land on a specific moss.  For being so selective as to their growing conditions, the Ghost Orchid drifts in at number 4.

A rare wild orchid once found across Europe, Yellow and Purple Lady Slippers are now growing in Britain, but in only one odd location: a golf course.  It has been under strict police protection since 1917 in order to preserve it from people (and golf balls of course).  A single cutting can be sold for $5,000 US, which is unheard of considering how the plant is very difficult to propagate.

Another rare Lady Slipper flower (Cypripedium reginae) is just as difficult to propagate; even Charles Darwin failed to successfully cultivate it.  The seeds of the flower provide no nourishment for the growing plant and so it lives in a symbiotic relationship with a specific type of fungus that nourishes it.  Once the plant has reached maturity, the fungus lives off the adult plant.  The flower has dark purple to almost red-brown tendrils and bright-yellow “slipper or moccasin” shaped flowers. For being so rare, so temperamental, and so fungus-friendly, the Yellow and Purple Lady Slippers dance in at number 3.

Discovered by a Chinese farmer named Mr. Ding when he found it growing in his steel pipes, and then later by a Chinese nun named Lushan who found it growing under her washing machine, the mysterious Youtan Poluo has no scientific name and is made up of 28 pieces of minuscule, white sweet-smelling flowers measuring a mere 1mm.  It is a flower that has been mentioned in Indian myth and was believed to only bloom when the Sage King of the future visits the present world.  In Sanskrit the name means “an auspicious flower from heaven”.  The flower is also mentioned in Buddhist scriptures and botanical experts say that the flower only blooms once every 3000 years (now how would they know that?).  For blooming but every 3 millenniums, the Youtan Poluo flower is quite a wonder at number 2. 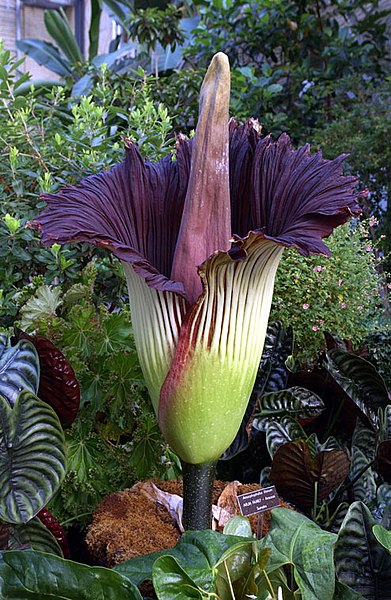 Native to Sumatra, this rare and striking plant has flowers that reach up to 6 feet in height and 3 feet in diameter.  The Corpse Flower is found on low-lying rainforest floors in Indonesia and looks like something out of the prehistoric age (or perhaps a Star Trek episode).  It is considered the world’s rarest, largest, and most endangered flower.  Also known as Rafflesia, its survival is interdependent with the Tetrastigma vine.  Bodiless, stemless, leafless and rootless, it requires the vine for its nourishment and support.  It emits a pungent rotten flesh smell (hence the name, “Corpse Flower”) which attracts flies and beetles to pollinate it.  The flower blooms for about a week before dying.  For breaking the stereotype of all that a flower is or should be, the Corpse Flower comes in at number 1 for the world’s most rare flower.