10 Animals You’ll Only Find in One Place On Earth

It’s usually not a bad thing to be unique and to know where you want to be in life. About 72% of Americans live in the same town where they grew up. Most people live an average of 18 miles from their mother. So once we find a place we like, we stay there. And animals aren’t all that different. In fact, a number of animals are incredibly location specific. So much so that there are entire species you’ll only find in one very small space in all the world.

10. The Beach Vole Lives on a Single Island Off the Coast of Massachusetts

The beach vole is a tiny rodent that you’d likely mistake for a mouse if you happened on it in the wild. Of course, if you did happen on one in the wild then you’d absolutely be on Muskeget Island off the coast of Massachusetts because that’s the only place in the world these voles live.

The island is quite small, just 2.6 square kilometers, which is just over one square mile. It’s likely that the vole is an offshoot of the mainland meadow vole. Sometime in the past 3,000 years it likely got transported to the island and evolved on a separate path.

The little animals are only about 7.5 inches long and live on the grasses that grow on their tiny island. Not much else lives there aside from poison ivy and beach grass but if the weather were to get bad enough, the whole population could suffer as a result of being washed out.

The Devil’s Hole pupfish lives in Death Valley and that’s probably the most metal thing you can say about any fish anywhere. They’re also highly endangered because they only live in that one single pool in Death Valley, a place not typically known for its diverse and welcoming aquatic ecosystem.

The pool is in a cave in Death Valley National Park. It’s about 10 feet wide and 70 feet long, with a depth of 500 feet at the deepest point. But the fish tend to stay in the shallows. In 2013, the population was drastically low – only 35 of the tiny fish were left alive. But by 2022 that number had bounced back considerably with 475 of the fish thriving both in the cave and in captivity thanks to conservation efforts. Breeding them in captivity is not easy, which is why conservation efforts are both crucial and difficult.

Their home is considered the smallest geographic range of any vertebrate, and they are remarkably inbred as a result. The pupfish part of their name comes from the fact they like to play, which is something unusual for fish, and they’ve been likened to puppies. Of the several species you can find in other pools in Death Valley, the Devil’s Hole ones are the smallest and least aggressive.

8. The Saguaro Cactus Only Grows in the Sonoran Desert

Any cartoon you’ve ever seen depicting the Old West probably included the image of a Saguaro cactus. These are the stereotypical cacti; the tall, thin plants that sometimes look like a stickman with his arms bent. You can find their likeness in pictures and even video games like Final Fantasy’s Cactuar. But despite being symbolic of both the west in terms of geography and in terms of the time period of the Old West, the Saguaro cactus has a surprisingly limited range.

You’ll only find the Saguaro cactus in the Sonoran desert. That covers the very southeast edge of California as well as southern Arizona and the attached areas of northwest Mexico. In that area, the cactus tends to only grow in Arizona. There are 23 major deserts in the world and there are 194 species of cactus native to the American Southwest, but the Saguaro still stands symbolically for all of them.

If you ever go on vacation in Palau, odds are you’ll make a stop at Jellyfish Lake. This may be the most famous tourist attraction in the country, and for good reason. It’s an inland lake that is nearly wall to wall jellyfish. The jellyfish are not dangerous to humans, which makes swimming and scuba diving a big draw.

The golden jellyfish calls the lake home and you won’t find them anywhere else in the world. Though the species was on the decline for a wall and swimming was banned, numbers began to increase and swimming once again returned in 2019. At one time there were 20 million jellyfish in the lake. In 2018 it was down to just over 100,000. A good population is considered somewhere between 5 and 8 million which hasn’t been reached yet. It’s believed climate factors like El Nino contributed to the population decline, but also sunscreen worn by bathers which may have been poisoning the jellyfish.

Every day the jellyfish follow the path of the sun as it passes overhead, in part because this affects the growth of the algae they eat so they move to allow their food source to grow and eat as well.

6. Golden Cave Catfish Are a Species of Air Breathing Catfish from Namibia

It’s not unheard of for a fish to breathe air, but it’s not entirely usual either. And even less common is to find a species living in an underground lake, but that’s the claim to fame for Namibia’s golden cave catfish. .

At only six inches in length, they’re not particularly large fish. Their eyes are covered with skin since seeing is pretty much useless in an underground lake and, because of their low numbers, they’re critically endangered.

Breeding them outside of their cave has so far proven unsuccessful, so conservation efforts have to rely on preservation for now. In their natural environment they eat plants and decomposing bits of whatever they can find.

5. North American Eurasian Tree Sparrows Can Only be Found Near St. Louis

Sparrows are one of the most common bird species in the world. House Sparrows can be found on every continent now, and their native range is across Europe and parts of Africa and Asia. They can live in forests, grasslands, deserts, urban areas, it doesn’t matter. And that’s just one sparrow species.

As hearty and widespread as these little birds are, not all of their cousins follow suit. The North American Eurasian Tree Sparrow, for instance, calls one place home. And that place is St. Louis.

To be fair, their range is a little wider than that. You can find them in parts of Illinois and southeast Iowa as well. But close to St. Louis. They come from 12 original Eurasian tree sparrows that were released in Lafayette Park back in 1870. Residents with European origins wanted to have their local wildlife present in their new home. None of the other bird species took root, but the tree sparrow did, establishing a foothold and staying in the area ever since.

Most of us know what a frog looks like and, to be honest, the purple frog isn’t it. These rare creatures are only found in the Western Ghats mountain range in India. They look like a frog that a child may have drawn from memory after seeing one once. They have strangely bloated bodies that are grayish purple and pointy little snub snouts. Genetically they are most closely related to a small species found only in the Seychelles, and likely separated millions of years in the past. They evolved independently over the last 100 million years.

It wasn’t until 2003 when the species was formally described thanks to the fact they burrow and are rarely seen. They only surface for two or three weeks a year during monsoon season. Only 135 of the frogs have been identified in the wild and of those only three of them were female.

3. The Frightful Hairy Fly Lives In One Rocky Cleft in Kenya 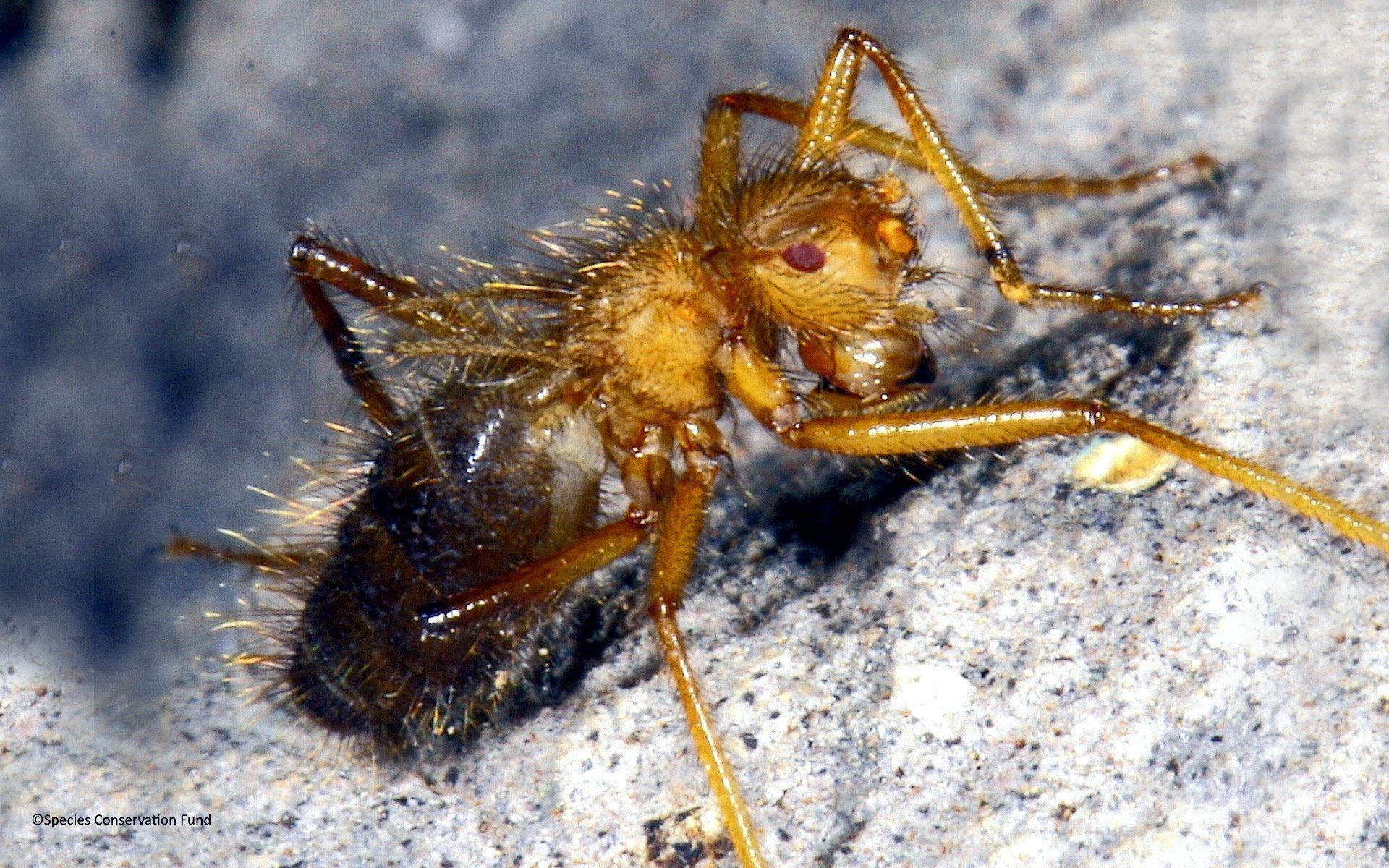 With a name like the Frightful Hairy Fly, you’d hope that this little insect has a dramatic story to live up to such a name. Lucky for us, that’s certainly the case.

To start things off, the frightful hairy fly can’t fly. It is hairy, though. It also lives exclusively on one rocky cleft in the Ukazi Hills of Kenya where it seems to spend all of its days in bat poop. The species was identified in 1933 and rediscovered in 1948; it wasn’t until 2010 that it was found yet again and able to be studied more closely.

It resembles a spider more than a fly though it is still part of the fly family. It’s also been unclear if the insects have a parasitic relationship with bats or if they just feed on the guano. Their mouth parts are not suited for predation and so far they’ve only ever been seen in a crack in a boulder in that one cave.

2. Ozark Hellbenders are Only Found in Ozark Streams

If you’ve never seen a two-foot longer salamander before and you happen to live near the Ozark mountains then count yourself lucky. You’re within range of the species known as the Ozark Hellbender. These large salamanders live exclusively in clear Ozark streams and rivers and, despite their over-the-top name, they’re pretty much harmless.

The salamanders can breathe underwater thanks to flesh folds in their skin down their sides, and typically wedge themselves under rocks to avoid fast moving currents. They are also endangered with consistently dwindling numbers though the exact reason isn’t known. What is known is that they have very particular needs in terms of water temperature and water quality, so it’s possible things like pollution or climate change are direct contributors to their lowering numbers.

Because the salamanders are nocturnal and spend their days under rocks, most people never get a chance to see them. When they do come out at night, it’s typically to hunt crayfish or other prey animals.

1. The Tully Monster is an Extinct Species of… We’re Not Sure What

The Tully Monster is not a living species so you won’t technically find it “living” anywhere on earth. But you can find the remains of this bizarre prehistoric life form in just one place, and no one is entirely sure what it even was.

Officially known as Tullimonstrum gregarium, the Tully Monster was aquatic, and we know what it looked like based on fossils. And you’d think that would be enough to say it was a fish or a crab or something, but that’s not the case. It had a soft body and no backbone. Although that’s not fully agreed upon. Its body was tapered and segmented. One end of its body ended in a tiny little 8-toothed mouth on what looked more like a tentacle than anything else. The other was a tail with fins. It also had a pair of eyestalks maybe a third of the way down its body from its little mouth.

Though it was soft bodied, the seas it lived in were just right to preserve the bodies in the mud and allow for us to see what it looked like. And those rare fossils are only in Mazon Creek, Illinois. If they did live anywhere else, we have no evidence of it yet. But maybe that’s just as well since we can’t even decide if it had a spine or not, let alone what kind of creature it may have been.