10 Bizarre and Unexpected Forms of Camouflage

Camouflage is a process or mechanism used to conceal something by making it blend in with its surroundings. It can be natural, as is the case with animals that blend in with their environment or unnatural, as is the case when the military paints vehicles or puts uniforms on soldiers to help them blend in. And in most cases, this seems to make sense. Traditional military camouflage blends in with foliage so you can hide in trees or bushes. Makes sense. But sometimes camouflage gets remarkably clever and unexpected.

When the sun goes down in many parts of the world, the night skies come alive. Both bats and moths come out and moths need to be on the lookout because bats are generally faster and also hungry for delicious moth meat. Moths, however, do have a bit of a unique defense against these flying mammals in the form of a very unusual camouflage.

As a human, you may see a number of moths that have visual camouflage. They can look like bark or leaves and vanish from sight. But when a bat is hunting one, this means nothing. Bats don’t rely on their sight to hunt at night as much as echolocation. They do actually have good eyesight, but echolocation works better in the dark, as you can imagine.

To combat the danger of bats and their precision hunting skills, some moths have developed echolocation camouflage. This kind of acoustic camouflage in the form of those powdery scales moths have on their wings allow them to absorb sound, preventing the signal from returning to the bat to indicate where the moth is. In simple terms, this makes them invisible in an auditory way, potentially rendering the echolocation ineffective.

9. Military Pink was a Shade of Pink Used to Hide Naval Vessels

The very idea of camouflage is that it’s a method of blending in. Jungle camouflage is green because jungles are typically green. Desert camouflage is brown and beige for similar reasons. But Mountbatten Pink is an exception to this rule that camouflage should actually blend in with something naturally.

Devised by naval captain Louis Mountbatten for British naval vessels, Mountbatten Pink is exactly what it sounds like – pink. The idea behind Mountbatten Pink being used on military vessels was that it would conceal them on the horizon by hiding them during sunrise and sunset. During the Second World War, this was when German U-boats were most likely to launch an attack.

The big problem with the color was that it wasn’t really tested for effectiveness and it didn’t really work. This was particularly noticeable during every other time of day when the pink color was not an effective camouflage. Similar to Mountbatten Pink, Dazzle camouflage was an attempt by the military to come up with an unusual and even counterintuitive method of disguising vessels during wartime. Boats were hard to hide on the water regardless of the paint color being used. So a reserve lieutenant from the Royal Navy proposed an unusual idea – don’t hide them at all.

Dazzle camouflage was offered as a method not of hiding a vessel but confusing the enemy. Ships would be painted with stripes and shapes at odd and intersecting angles. The effect was not that the ship would be hidden, but it would be hard to understand. Enemies would see the vessel and the Dazzle paint job caused confusion. It became difficult to gauge the size and distance of the vessel, and even in what direction it was traveling.

By the end of 1916, one-fifth of the ships in the British Navy had already been sunk, so they were willing to try just about anything. King George was shown a model and asked to say what direction he thought it was traveling. The King said “south by west.” In reality? East southeast. An enemy gunner who couldn’t tell what direction a boat was heading wouldn’t know where to aim weapons.

In the end, results were fairly inconclusive when it came to practical use. Many ships were sunk, and many weren’t. Was Dazzle successful? For anyone on a boat that wasn’t sunk, the answer was yes.

7. Disney Uses Go Away Green to Hide Everyday Parts of its Theme Parks Not all camouflage is based on life or death situations. Sometimes it’s just used to hide things you don’t want others to notice, and that’s exactly how Go Away Green and Blending Blue work at Disney World and other Walt Disney theme parks.

Because Disney makes it money by offering visitors an immersive and very pricey experience. They sell the experience very clearly in how they decorate and present the parks and even in the language they use – it’s the Magic Kingdom, after all. The problem is the magic has a lot of infrastructure that no one wants to see. So the parks paint everything no one needs to pay attention to with their own camouflage shade known as go away green. It’s meant to disguise things as simple as trim and as complex as certain buildings and doors that aren’t meant for everyday customers.

6. Bioluminescent Sharks Use Light to Camouflage Themselves

Sharks, for better or worse, and it’s usually worse, are often associated with films like Jaws and wild media reports of brutal attacks. And yes, some shark species can be dangerous and aggressive. There are over 500 species of shark in the world, and some of them can’t rely on powerful jaws and speed to protect themselves.

There are bioluminescent sharks in the ocean that, even though they can grow to nearly six feet in length, have developed some unique camouflage to keep themselves safe from predators. At least, that’s what researchers believe based on their studies. Because these species of sharks have bioluminescent cells concentrated on their underbellies, it’s been guessed that the glowing effect, when viewed from below with the surface of the water and light visible above them, would render the sharks almost invisible.

5. Sloths are Camouflaged by Symbiotic Algae The internet loves a sloth, those adorable, slow-moving South American creatures that do almost nothing. It makes sense that they’d need some kind of defensive camouflage because they absolutely aren’t fighting off an attack from anything. And that brings us to algae.

You may have noticed older sloths have a green hue to their fur. That’s actual algae growing on their backs and it does a really amazing job of helping them blend into the foliage of the trees in which they live.

Unlike most camouflage, this one is symbiotic. The algae gets water from the fur of the sloth and essentially a safe place to live while the sloth gets to blend in and it also absorbs nutrients from the algae through its skin.

4. Plants Can Use Odor Camouflage to Trick Insects Camouflage isn’t exclusively reserved for animals. Plants also need to use whatever they have at their disposal to try to hide from predators whenever possible. If anything, it’s more important for plants since even a sloth can run away faster than your average ficus.

Researchers studied numerous plants and insects in a Mexican rainforest and determined that plants are able to mask their own chemical odors by disguising themselves as other plants that insects are less inclined to want to eat.

In a community setting, like a rainforest, when plants are surrounded by so many other plants, they can emit odors that basically make them fade into a crowd. Instead of having unique and distinct smells that will attract predators, they all begin to smell alike, making it less likely that insects will be able to pick them out of that crowd.

3. 18th Century Toilets Could Be Camouflaged as Books 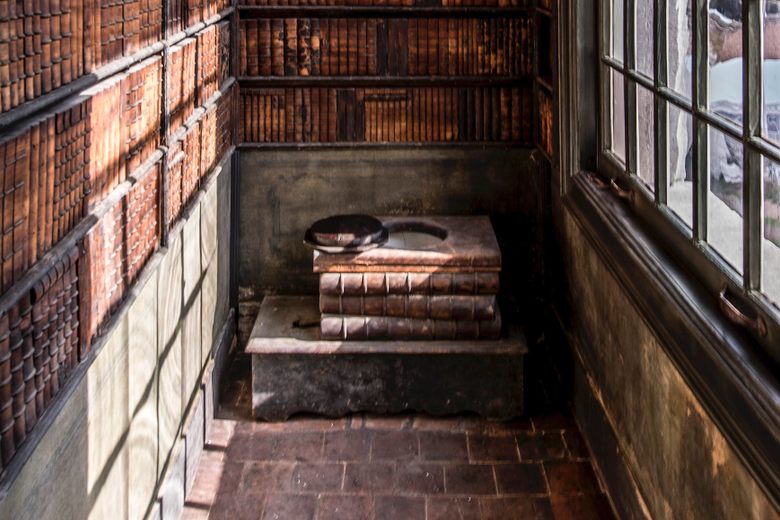 Similar to the Disney method of hiding structures that are less than magical, people throughout history have sometimes needed to hide things that they didn’t want others to see. Not for any security reasons, but more from a sense of propriety. That’s how we ended up with camouflaged toilets.

Even today, the toilet is a private place and for good reason. You don’t want to see anyone using it, right? But in the 18th century, just knowing it existed at all was too much for some people. That’s how things like a toilet camouflaged as a giant book happen. Some of these seem to have been extravagant decorative touches, but it’s also speculated that some may have been novel ways to hide a chamber pot while on the road. It’s also like that then, as now, this would have been considered a low brow joke because toilet humor has always been funny to some people. Dragonflies are some of the coolest insects in the world. The largest insect ever was a prehistoric relative of the dragonfly that clocked in at a stunning 18 inches in length with a wingspan of 30 inches. Not only do they have a unique appearance, they have some very interesting skills as well. For instance, a dragonfly can engage in motion camouflage.

This unique form of camouflage flies in the face of what most animals do to stay hidden. While traditional camouflage works best if you stay still to look like the background, a dragonfly can disguise the fact that it’s moving at all. It’s such a complex process that researchers still aren’t sure exactly how a dragonfly manages to do it. That said, what is understood of the process is quite unique.

Basically, when in flight and pursuing prey, a dragonfly is able to continually make adjustments to its flight in a way that keeps it locked in the same spot in its prey’s retina. To the eyes of the creature being pursued, the dragonfly is remaining perfectly still, hovering in place. The truth of the matter is that it’s actively flying towards its prey, but its position relative to a stationary object looks like it is staying the same. This allows the dragonfly to get very close to its prey very fast without them realizing that they’ve run out of time to escape.

When most of us think of oil fields, we probably picture places like the Middle East or even Texas. The truth of the matter is that oil is refined in a number of places, from the prairies of Canada to right in the middle of the City of Los Angeles.

The city of LA proper has a population of nearly four million. Los Angeles county has a population of over 10 million. It’s home to Hollywood, Beverly Hills, and all the glitz and glamor people associate with one of the biggest cities in the world. It’s also home to an estimated 1.4 billion to 5.6 billion barrels of oil. That’s just the oil left in the fields. They’ve been taking it out of the ground since around 1903.

If you’ve never been to Los Angeles, you’ve likely seen a good portion of the city depicted in films. What you don’t see are oil derricks. If they’re pulling literally billions of gallons of oil out of the ground, there have to be a lot of derricks. At one time there were thousands, but even today several hundred are still active.

The derricks in many places have been hidden from sight, camouflaged into the background of the urban landscape. They’re hidden in buildings, shells constructed with the facade of an apartment or office. Sometimes they’re tucked away behind parking lots or even trees. But generally they’re hidden away from sight in ways most people would never guess unless they knew what to look for.