The world is full of accidents that can lead to either great or terrible things. A terrible accident can cost a life while a serendipitous one can lead to a helpful discovery like penicillin. But not every accident needs to be high stakes. Some of them are just entertaining and firmly entrenched in the world of pop culture.

Warner Brothers, the studio behind the Looney Tunes and Bugs Bunny, was making between $8 million and $10 million per year off the cartoon rabbit in the early 90s. Bugs has been around since 1939 when the character was first drawn for a cartoon called Hare-um Scare-um and he didn’t actually have a name at the time. The name Bugs Bunny was given to him entirely by accident around that time.

An artist named Charles Thorson had drawn the rabbit for the cartoon and labeled it “Bug’s Bunny.” It wasn’t a name, it was more of a direction. He was drawing it for an animator named Ben Hardaway, who was better known by his nickname Bugs. So he hadn’t named the rabbit, he just indicated it was for the guy everyone in the office knew as Bugs so he could bring him to life. Turns out he did in more ways than one.

They took the name off the sheets and corrected the spelling, making it just a singular noun instead of possessive. It stuck and has been in use for 80 years.

9. Dan Aykroyd Sings We Are the World 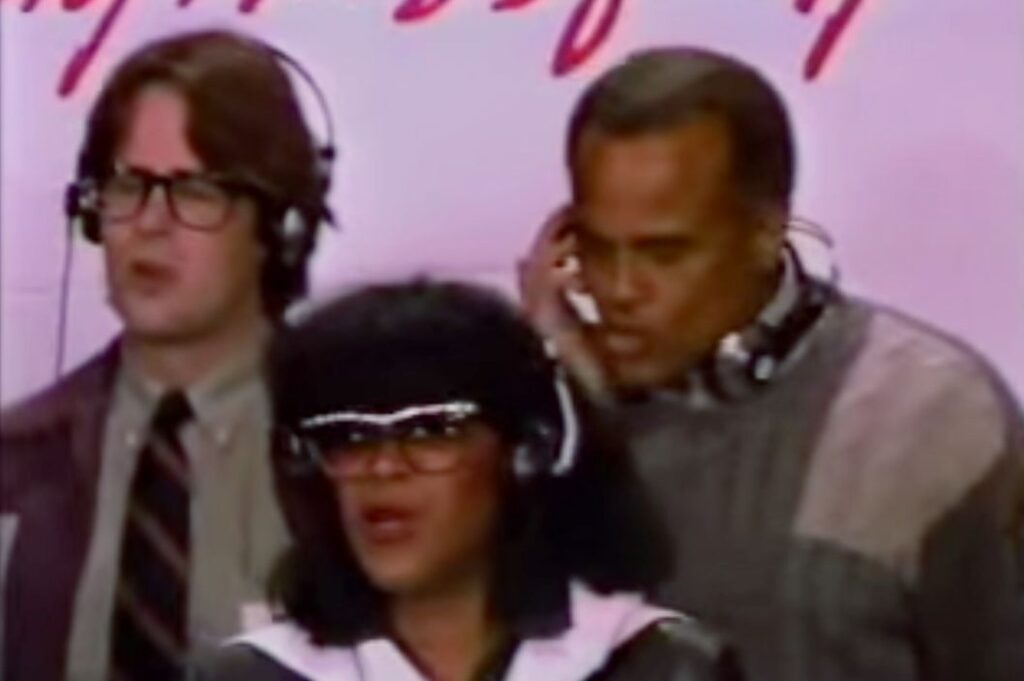 Actors from Saturday Night Live often go on to have varied and interesting careers in pop culture, but few have done more than Dan Aykroyd. The legendary star of Ghostbusters and Blues Brothers is not just an actor, but a writer and a singer. He even makes wine, but let’s go back to the singing for a moment.

Obviously, Aykroyd is a big fan of music. His stint in the Blues Brothers has shown that, first in the original 1980 film and then nearly 20 years later for the sequel. He also co-founded the House of Blues chain. But outside of the Blues Brothers, one of the few places you’ll ever hear him sing is on the “We Are The World” charity single from 1985.

The song was recorded to benefit famine relief in Africa and was written by Michael Jackson and Lionel Richie. The single sold over 20 million copies, making it one of the bestselling singles of all time. It features a pantheon of 80s music superstars including Stevie Wonder, Diana Ross, Paul Simon, Bruce Springsteen, Willie Nelson, Bob Dylan, Ray Charles and literally dozens more. And Dan Aykroyd. But why?

Aykroyd was in the building where the song was being recorded to interview a business manager. It was the wrong place. He was in the office of a talent manager. The man asked him if he wanted to get in on the recording since he was there anyway, and he agreed. Jessica Simpson has sold over 20 million albums and had a successful if slightly embarrassing reality TV show. She’s a best-selling author and also has a fashion line worth over $1 billion. So she’s doing alright for herself, basically. But despite that, she still had to deal with a bizarre addiction that she stumbled on by accident. Simpson was addicted to nicotine gum.

Most of us know that nicotine gum is used to break an addiction to smoking. Simpson was given a piece by the mother of a friend, not realizing what it was. She figured she was just chewing normal gum. She says she felt like it gave her a burst of energy and became addicted to chewing it. Apparently, she’s never actually smoked a cigarette in her life, but the gum managed to get her hooked. “American Woman” is one of the most famous songs from the 1970s and it comes to us via Canadian rock band the Guess Who. The opening guitar riff is iconic and was written by Randy Bachman, who was also part of Bachman-Turner Overdrive. And his iconic song was made entirely by accident.

Bachman had busted his guitar in the middle of a show at a curling arena in Waterloo, Ontario. As he was fixing his guitar, he started playing a riff that became the start of the song. He didn’t want to forget it, so he kept playing and told the lead singer to sing something – anything. So Burton Cummings sang the lyric “American woman” and then improvised some more on the spot. The entire song, which is arguably their biggest hit, came from an accident.

The David Lynch series Twin Peaks was a surreal mystery/horror drama that was full of bizarre imagery and characters. It’s also a stunning example of the baffling way Lynch tells a story. The end result could not have been what he envisioned from the start because so much of it hinged on an accident. That accident was Killer Bob.

In the show, Killer Bob is an entity that can possess humans and causes them to commit horrible crimes like murder. Bob was the villain of the series and he was played by a man named Frank Silva. But that all happened by accident.

Silva was a set dresser on the show, which means he did things like arrange furniture, hang photos, anything to make the set look real for filming. Lynch liked the look of Silva and filmed a scene with him for no reason, with Silva crouched behind a character’s bed, not sure if he’d ever use it for anything. During a later scene, his reflection was caught in a mirror. David Lynch liked it so much he kept it in and built the character of Killer Bob around him. He even brought Bob back for the series sequel after Silva had died.

Sports mascots have a weird place in society, straddling the line between sports and pop culture while not really having much to do with either. Arguably, a mascot is a cheerleader, meant to amuse fans and maybe pump up a crowd. They were goofy costumes that sometimes have no relation to the team they represent, like the Phillie Phanatic. Another one that’s a bit of a head-scratcher? The Phoenix Suns Gorilla. He happened by accident.

Neither phoenix nor the sun has much to do with gorillas, so it’s understandably confusing that a gorilla is their mascot. Henry Rojas never intended to be their mascot either. He just showed up at a game dressed as a gorilla.

Rojas was working for a singing telegram company and had a job at the coliseum where the Suns played. He was trying to mind his business, do his job, and leave. But when he got up to leave during a break in play, music started playing over the speakers. People saw a gorilla on the court and assumed something was happening. Someone encouraged him to dance, so he did. A ref even threw him a ball, and he sank a shot. People went crazy for it. The team management actually hated it at first, but they couldn’t stop him from performing in time.

Rojas got a kick out of the fan reaction so he kept coming back dressed in costume and dancing or goofing around. The crowd loved it and eventually the team made him official. Star Wars revolutionized the special effects industry when it came out and gave rise to Industrial Light and Magic, one of the biggest and most innovative effects companies in Hollywood. But it wasn’t just the visuals that were next level, the sound design was unique as well. Many of the iconic sounds were created through incredible ingenuity.

AT-AT walkers were sourced, in part, from dumpsters. TIE fighters are a mix of an elephant with a car on wet pavement. Most of the laser blasts are sounds produced by striking guide wires. And lightsabers? Those were an accident.

Sound designer Ben Burtt explained that he stumbled on the sound he wanted when he passed a microphone behind an old TV as he was walking from one side of a room to the other. The microphone picked up a signal from the old picture tube and produced that iconic buzzing hum we all recognize as a lightsaber sound. The song “In the Air Tonight” by Phil Collins is probably best known for that iconic drum break. It’s very short but it stands out and it seems like everyone knows it. It’s arguably the most famous example ever of something called “gated reverb” which is a technique Collins himself helped discover by accident a year before he recorded that song.

Collins was working on a track with Peter Gabriel and the studio in which they were recording had a talkback microphone. Sound engineer Hugh Padgham noticed that it picked up Collins’ drumming in a unique way. The talkback mic wasn’t meant to record music, it was a communication tool for talking. It was highly compressed and cut out a lot of sound. It also featured something called a noise gate, which stopped recording sounds very quickly. That resulted in the punchy reverb effect of the drums, which was a strong contrast to the more flat drum sound which was common in music beforehand.

The sound became huge and you can find it in a ton of ’80s music and even in stuff being recorded today.

Blade Runner has become a cult classic and a titan of the sci-fi genre. But that’s today. When it debuted in 1982, things didn’t go as well. It made a profit at the box office, but it was a small one. The film would likely have been mostly forgotten if not for a theater in 1990 that wanted to show it again.

The theater requested a print of the film but what they got was not the 1982 version. That one, plagued by disagreements between director Ridley Scott and the studio, had an ending the director didn’t like and a weird voice over narration from Harrison Ford. The theater in 1990 got Ridley Scott’s director’s cut. The person who sent it never watched the reel they sent and had no idea there even was another version.

Audiences loved the new cut of the film and the studio figured they could capitalize on it. They got Scott to come back and finish some edits and even add a new scene. The new 1992 cut was well regarded and even led to a second “definitive” version in the year 2007. Anyone who grew up on Nintendo knows the Konami Code. The infamous cheat code was something every kid had memorized. The sequence – UP, UP, DOWN, DOWN, LEFT, RIGHT, LEFT, RIGHT, B,A, B,A, START – could make a player all but invincible in Nintendo games published by Konami. It was first featured in the game Gradius but achieved widespread popularity in the game Contra. It also featured in series like Castelvania and the Teenage Mutant Ninja Turtles Among others.

The code was essentially a cheat. In Contra, it gave a player 30 extra lives. In Gradius, a player got nearly all available power ups. It was programmed by a man named Kazuhisa Hashimoto. He was working on Gradius and wanted a shortcut to make the game easier for himself when testing it. He designed something easy to remember but something that no casual player would ever guess and the code was born.

Before the game was released, the code was meant to have been removed. But it was left in the game by accident., forgotten during its development. It went on to become one of the most iconic parts of early gaming and is still used in many games even today.