Innovation might be a given under the pressure of wartime, but it also leads to some truly mad creations. Here are perhaps the most definitively nutty weaponry creations from the countries participating in history’s deadliest conflict, World War II. 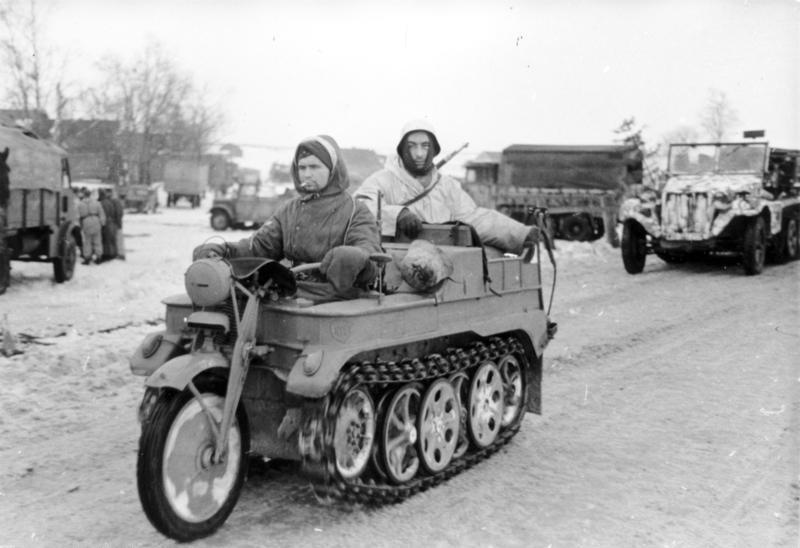 Flying boats and cars may be well known concepts, but mixed-use vehicles got even stranger in World War II. The Kettenkrad was one of the most unlikely things humans have built: A motorcycle-tank. Yes, it was a motorcycle built with tank tracks, designed in 1939 and in service throughout much of World War II. Just too bizarre, the machine has since become a sort of collectible for those into war history. The “bike-tanks” had a variety of uses and were produced up until 1944. They were agile for a tank-type vehicle, namely a tracked vehicle, and reached speeds of over 40 miles per hour.

The machines had only 36 horsepower, but could propel the contraptions over all varieties of terrain. Originally, a Kettenkrad was designed to be dropped at battle sites via the Junkers Ju 52 aircraft. While it was not armored, the Kettenkrad was clearly a bike that incorporated the make of a tank. Yes, you read that right. This Antonov creation was one of the craziest things you could think of – a flying tank. The glider married a huge tank with twin wings to make it into a glider that would be released after being launched with the assistance of a plane. The machine was tested in 1942 but the concept was scrapped after it failed to generate much traction. Soviet T-60 tanks were fitted with gigantic gliding wings and tail booms, then towed behind a repurposed bomber before being released.

The giant gliding contraption was to fly into the battlefield, where the tank would detach from the airborne equipment and head off into battle. The idea did not work out too well, but it was certainly unlikely and innovative. The Antonov A-40 Krylya Tanka, translating to “tank wings” in Russian, was ultimately scrapped but certainly showed the bizarre innovations that result from wartime logistic predicaments. Russian Flying Aircraft carriers. Seriously. Almost as weird as it gets. A Soviet monster plane carried smaller warplanes known as “parasite aircraft” that were released from it and took part in an aerial attack in Romania. Following a history of Soviet work on flying aircraft carriers, the Zveno-SPB was deployed in 1938 and continued to be used against Germany on the Eastern Front until 1942. The huge carrier-fighter combination known as the Zveno-SPB consisted of a Tupolev TB-3-4AM-34FRN as the carrier or mothership, with two Polikarpov I-16 Type 5 single-seat fighters mounted with struts under each wing.

The bizarre missions met with a measure of success, achieving hits on a Romanian oil refinery aligned with Nazi interests in a bold daylight attack when regular bombing had previously fallen short of success. The planes were released by their carrier 25 miles out from the target and returned to base themselves. Even the formidable Messerschmitt Bf 109 was potentially vulnerable to this unique innovation – two were shot down by Zveno-SPB mission fighters on additional sorties. The Zveno-SPB carrier-parasite fighter sets are thought to have completed approximately 30 missions. Recalling something from a science fiction horror novel, Nazi Germany built the world’s largest gun made operational in battle, the Schwerer Gustav. Of course, Hitler was gloating over the monstrosity and inspected it in person with Albert Speer. If you are thinking a huge machine gun tucked under a clandestine operative’s trench coat, think again. To move this gun, you would need a train, and it wouldn’t fit in many buildings. The awful weapon was four stories tall, 155 feet long, and fired shells that weighed as much as two small cars – over 10 tons. The barrel had a caliber of 31 inches and was 98 feet long while the gun weighed 1,350 tons.

The gun had been created based on the calculations of engineer Erich Müller of Krupp, considering what it would take to shoot through either approximately 23 feet of reinforced concrete or around 3.3 feet of steel armor. The Gustav was viewed as an asset that would permit breach of the Maginot Line, a heavily fortified obstacle in the way of Hitler’s invasion of France. However, the gun was not ready for the invasion, and was tried later elsewhere, but found to be impractical.

The Nazi regime poured money into all means of shooting down aircraft, from flak to interceptor fighters, but one of the strangest anti-aircraft attempts by the Third Reich was the WindKanone (wind cannon). The machine looked absolutely bizarre, like a bent pipe that was rotated and pointed skyward.

The WindKanone was so powerful that it could demolish wooden boards positioned 200 yards away without ever firing a solid projectile. The “bullet” was a set of compressed air blasts were intended to strike targets with severe destructive and disruptive effects. The blasts were intended to damage and hinder aircraft passing overhead, causing a crash… or so it was hoped. However, the “Anti-aircraft air blaster,” as one could describe it, was never deployed in combat despite all the effort that went into designing and testing it. A Nazi helicopter project might be the last thing on anyone’s mind, but the keen military historian may be aware of an interesting German Air Force project to equip the Luftwaffe with helicopters. The Focke-Achgelis Fa-223 was a project to equip Hitler’s armed forces with hovering aerial capacity as the world’s first wartime helicopter. The design was quite curious, with booms extending to each side like wings, upon which a rotor was mounted.

The two rotors, 39 feet in diameter each, offer a sharp contrast to the modern image of a typical helicopter, with a centrally mounted main rotor. The name Drache translates to “Dragon” in English. Heinrich Focke, the inventor of the helicopter, was directed by the German Air Ministry to focus on helicopter development and started Focke-Achgelis in 1937, working with aviator Gerd Achgelis. The helicopter could achieve 113 miles per hour and lift 2,200 pounds, making it most suitable for cargo transport among its planned uses.

They are mysterious wooden boxes that look vaguely like a typewriter, and fetch a high price when available for resale and purchase by collectors. About 250,000 Enigma coding machines are still in existance, and they can be exceedingly expensive. One was estimated to be capable of selling for $100,000 at a military artifact auction by Heritage Auctions. Equipped with keys, cogwheels and more, the tidy wooden box housed machines were central to Nazi Germany’s quest for control of Europe.

The codes produced by the Enigma machines were viewed as “unbreakable” but were cracked by codebreakers under the leadership of Alan Turing, the mathematician from Cambridge who was arrested after the end of the war for being gay and who, tragically, committed suicide. The Enigma was shockingly powerful. Combination potential reached three times 10 to the 114th power, but was used far below its potential by the Nazis. Churchill viewed the machine as so dangerous as to warrant destruction. As a result, the majority of remaining devices were scrapped. Biological warfare is nothing new. World War II tragically had some of the worst biological attacks in history, including when the year 1940 saw an Imperial Japanese Army Air Service raid on China using weaponized fleas. Bred in labs, fleas purposely infected to carry bubonic plague were dumped out of aircraft over select Chinese cities from 1940 to 1941. Thousands of Chinese citizens died in the following outbreaks.

The work of the notorious Unit 731, set up by Japan in Heilongjiang Province Unit, was associated with many of Imperial Japan’s worst war crimes against Chinese citizens. There, lead doctor General Shiro Ishii built clay bombs that contained 30,000 fleas per bomb, mass bred in giant containers and infected with bubonic plague. General Shiro Ishii believed biological means would be useful since they were bad enough to be banned under the Geneva protocol of 1925.

Shooting around corners might seem like the impossible, but one bizarre World War II weapon conceptualized under Third Reich combat superiority ambitions sought to do just that. The Krummlauf curved rifle attachment, a project started in 1943, fitted onto the StG-44 assault rifle. The machine looked like a bent garden wand attached to a normal weapon, but was seen as a surefire way to gain the upper hand by shooting without being seen. The plan was for combatants to be able to aim at the enemy without being in the line of fire.

While many German weapons were studied by the Allies, the Krummlauf slipped into obscurity after the end of the Second World War. A core challenge with the gun was the speed at which the barrel wore out, the turning bullet of course damaging the weapon attachment. While novel, the shooting system was nowhere near as effective as was hoped. There were two Krummlauf varieties, one with a 30-degree bend and one with a shocking 90-degree bend for use in tanks and other armored vehicles. At an auction, the rare military device fetches a high price. Desperation to stop Allied bombing raids created some admittedly outlandish German interceptor projects during World War II. Really a human-occupied surface to air missile, the Bachem Ba 349 “Natter,” translating to “Adder” and also known as the “Viper,” was one of the strangest and scariest creations of the Reich, both in its intention and due to the danger posed to the pilot. Designed by Erich Bachem, famed for creating the Fieseler Storch (Stork), the Natter was constructed largely of plywood. Twenty-four rocket launchers filled the near entirety of the aircraft’s flattened nose.

The 20-foot-long aircraft with a 13-foot wingspan was to be launched toward advancing bombers vertically, controlled by an autopilot system. The pilot was to be given control for the last part of the flight, before blasting the rockets into a collision course with the targets. The almost 5,000-pound aircraft was incredibly fast, reaching speeds of 620 miles per hour and climbing 37,400 feet per minute. The flights were to conclude with the pilot bailing out and part of the machine undergoing parachute recovery. The program was stopped before it launched by testing issues and the Allied capture of Natter launch sites.