Derived from Greek, utopia means “no place,” as in a place that couldn’t exist. But so desperate have humans been throughout history that even impossible dreams are believed. Hence most of the following mad visions were thought to be real in their day—or at least within our reach. At least eight tourist traps in China claim to be the Peach Blossom Spring. But in truth (or myth), only one man appears to have been there. Exploring an uncharted river through a forest of peach trees, a fisherman found a hole in a mountain. Since it was emanating daylight, he tied up his boat and squeezed through.

On the other side was an open, fertile land of bamboo groves and mulberry trees with clear, shimmering pools. The people, farmers, were all strangely blonde and dressed in old-fashioned clothes, even by fourth-century standards.

Although surprised to see the fisherman, they were urgently curious too. Plying him with chicken and wine, they asked about the world outside their own. Their ancestors, he learned, had taken refuge in this land from the sweeping reforms of the Qin—five or so centuries earlier. They had been without contact ever since. But as the fisherman answered their questions, they realised they hadn’t missed out; China sounded worse off than ever.

Eventually he left the Peach Blossom Spring, leaving markers along the way out. Arriving home, he shared his tale and arranged for a proper expedition. But, just as the natives had warned him, he never found his way back there. Mentioned in Sanskrit and Pali texts as early as 1000 BC, Uttarakuru is entirely free of corruption. There’s no agriculture, no conflict, nor harm to the creatures that live here. Furthermore, the year-round temperate climate ensures the trees here always have fruit, flowers, and (somehow) even milk.

The inhabitants live for thousands of years and while away their time playing music. Men and women are equal in freedom and there aren’t any rulers to speak of.

According to the Mahabharata, Uttarakuru is a land of the celestials—angels descended from heaven. In fact, mortals can’t even get through the gates. But if they somehow did get in, their corrupt mortal eyes would see nothing. Hyperborea means “beyond the north wind.” However, it refers not to a dark and frosty polar region, but a land of eternal spring. This is because Hyperborea lays behind Boreas, god of the north wind and winter, as he blows his cold gusts south. It’s also beyond the reach of Nyx, goddess of the night, so the sun here is always shining.

Above all, Hyperborea is a land of peace. Nestled between the Rhypean mountains and the river Oceanus, there’s very little chance of invasion—something many ancient Greeks must have longed for.

Disease is also unheard of. Hyperboreans are strong. Their kings, ten feet tall, are descendants of Boreas and the snow nymph Chione. And if (not when) Hyperboreans age, they transform into swans on a lake. The Island of the Lotus-eaters, or Lotos-land in Tennyson’s poem, was among the first stops Odysseus made. Driven there by a nine-day storm, his ships needed food and fresh water. But what he found there was far more enticing.

Arriving on the beach, he sent three men to scout out the natives. And when they failed to return, Odysseus led a party himself. He expected a fight. But as it turned out the scouts hadn’t been attacked, they’d been welcomed and fed by the natives. The food was just a little too good.

Like opium, the fruit of island’s lotus trees (not to be confused with the flower, a different plant) was so rapturously narcotic the men lost interest in home. “Most weary seem’d the sea, weary the oar,” mused Tennyson. They longed only to stay on the island, with its dreamy, smoke-like streams and “Lotos-dust” borne on the breeze. Although merely a blissful delusion, Lotos-land was real for the dreamers. In the end, Odysseus dragged his men back onto the ships and put out to sea at once. 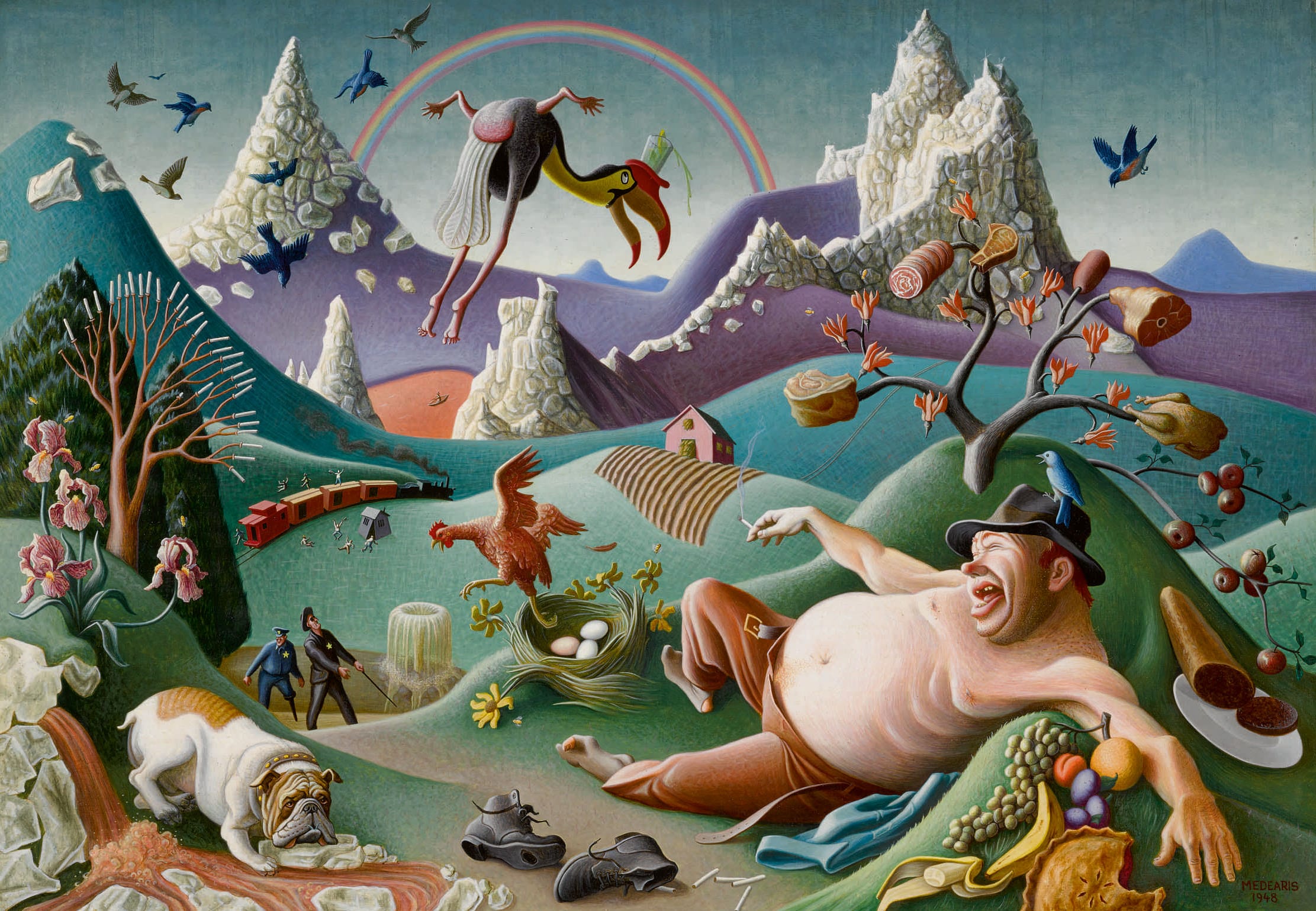 In the Big Rock Candy Mountains,

Where the handouts grow on bushes

And you sleep out every night

There’s never any wind or rain, the trees are full of fruit, the birds are always singing, and you never change your socks… It is, in other words, a paradise for hobos, utopia as imagined by tramps: a land of cigarette trees, alcohol springs, “a lake of stew and of whiskey too” (“you can paddle all around ‘em in a big canoe”), and hens laying soft-boiled eggs.

Although there’s apparently a police force here, the cops are figures of fun. Cursed with wooden legs, blindness, and rubber-toothed bulldogs, they pose no threat to the hobos. In any case, the jails are made of tin, so “you can walk right out again as soon as you are in.”

There’s actually a dystopian counterpart to the Big Rock Candy Mountains—the “All Go Hungry Hash House”—where the bread’s too tough to cut with a sword, the donuts are made of wood, and the sausages bark when touched. But the ballad on which McClintock based his was dark enough on its own; in the original ditty, the Big Rock Candy Mountains were a tall tale to lure kids for abuse.

In Cyrano de Bergerac’s L’Autre Monde (published posthumously in 1657), the eponymous narrator flies to the Moon by rocket-powered flying machine. The inhabitants, he finds, enjoy all the usual utopian tropes: eternal spring, peace, love, and immortality—or in this case aging backwards. They also have rifles that not only kill but cook whatever you shoot.

Moon speech is basically wordless. The lower class talk by moving their bodies while the upper use musical tones, either by mouth or, when they “disdain to prostitute their Throats to that Office,” by some kind of musical instrument. This would have been familiar to readers of Francis Godwin’s earlier The Man in the Moone (also published posthumously, in 1638), whose protagonist Cyrano even meets—perhaps the first ever sci-fi crossover.

However, in Godwin’s tale, the Moon seems far less utopian—at least for all but the rich. Not only do commoners live shorter lives, they’re also cruelly exploited. Peace is maintained artificially; rebellious children are simply swapped with better behaved children from Earth. We also learn from The Man in the Moone that the “seas” (maria) are in fact islands; the whiter, more reflective parts are the ocean. Also, the inhabitants, a tall, nocturnal, Christian people, are of a hue found nowhere on Earth—the result of living by earthlight. In feminist utopian visions, men are put back in their place: Pizan’s Cité des Dames is ruled by the Virgin Mary, Gilman’s Herland by parthogenic women, and Corbett’s New Amazonia by 25th-century bio-engineered superwomen (“I say, do you live here, or have you been taking hasheesh too?”).

But there is an alternative—to get rid of gender entirely. This was the thinking behind Victorian transgender lawyer Irene Clyde’s postgender “paradise” Armeria.

At first glance, Armeria isn’t so crazy. It actually looks pretty good. There are no gendered pronouns, names, or roles (husband/wife, etc.), married couples (conjuges) are equal, everyone lives in a palace, and nobody eats any animals (as they haven’t for 1,000 years).

They do, however, keep slaves—whose only right to self-determination is the right to apply to change household. This utopian vision also falls down when it comes to the question of children. Since Armerian couples can’t have their own, they buy them from a tribe of “barbarians”.

In other words, in terms of exploitation, Armeria wasn’t exactly worlds apart from the Empire back in Clyde’s day. It was just more gender-neutral.

3. Islands of the Sun Another ancient Greek utopia, the Islands of the Sun are an archipelago of seven circular landmasses, each 5,000 stades (1,000 kilometers) in circumference. They’re somewhere on the equator south of Ethiopia.

The natives are a scholarly sort engaged in every field of study, but mainly astrology. The seven islands actually correspond to the five planets of classical astrology along with the Sun and the Moon. Their alphabet likewise has only seven characters, but each has four different sounds. And, thanks to a doubled tongue, they can speak any language on Earth—including those of birds. They can also hold two conversations at once, speaking separately with each of their tongues. (They’re actually born with a forked tongue but they split it right down to the root.)

Strong and gentle, the six-foot-plus islanders have bones that can flex and, aside from the head, they are hairless.  Disease is rare and decrepitude unheard of; at the age of 150, they voluntarily commit suicide by laying on a plant that lulls them to sleep and kills them. If they do get injured in the course of their life, though, there’s an animal on the island that can help. Similar to a tortoise but with numerous feet and two intersecting yellow lines on its back, as well as four eyes and four mouths—one of each at the ends of each line—its blood is like glue for severed limbs. The land of Cockaigne was dreamt up by serfs. By the end of the Middle Ages, it was known throughout Europe—if not by its French name then by the German Schlaraffenland (Sluggard’s Land), the Dutch Luilekkerland (Lazy Luscious Land), or the English Lubberland.

Understandably for medieval peasants, whose labours filled the bellies of lords, free food was Cockaigne’s main appeal. The streets are paved with pastry, houses constructed with cake, roast hogs loiter with knives in their backs, and roast geese fly into the mouth—all amid rivers of wine.

Aside from food, Cockaignians are blessed with eternal youth and beauty, free love, and a carefree, peaceful existence. In fact, idleness here is a virtue; the longer you sleep, the more you get paid. But good luck spending your money—the shops in Cockaigne are all free. 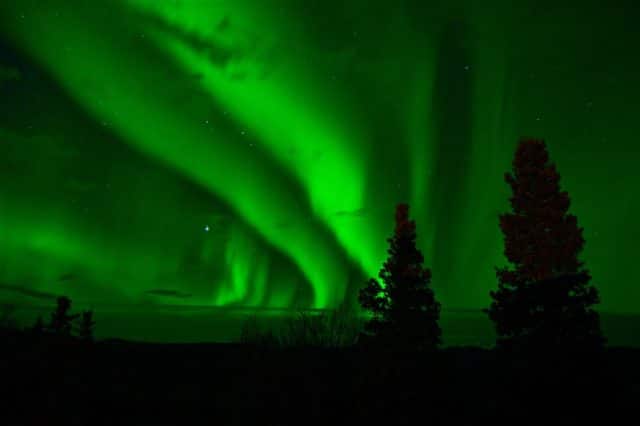 French utopianist Charles Fourier was influential beyond his own time. In fact, his is the only mad vision on this list to have actually been tried out for real (albeit on a very small scale).

In a nutshell, he believed our capitalist civilization had isolated Earth from the cosmos. The aurora borealis, he claimed, was a sign of our dying planet’s sickness. While other celestial bodies—the stars and planets—were blissfully “copulating,” erotically attracted to each other’s “aromal rays,” ours was in a state of disharmony. At the heart of Fourier’s program for humanity was a realignment with this attractive force.

At a personal level, this meant harmonising with our own natural instincts, from work to sex and marriage. Instead of labouring away at a job we hate, we’d cycle through many we love. He suggested 30 different tasks every day, minimum. To facilitate this, we’d all be rehoused in phalansteries: vast communes set on sprawling purpose-built country estates, each holding 1,620. Why this number? Because Fourier believed there were 810 personality types and wanted one of each sex in each phalanstery. Every citizen’s “attractive labor” would serve their own natural urges as well as the phalanstery as a whole. Sexuality would also be unleashed, not least by abolishing monogamy.

Once humankind had harmonised in this way, Earth would swiftly follow suit, its own attractive force or “aromal rays” shooting out “to make love to the stars.” But that’s not all; nature itself would be altered. “Aggressive” creatures like lions and sharks would soon die out, to be replaced by their gentler opposites: “anti-lions” and “anti-sharks”. Meanwhile, the mingling of “boreal citric acid” from the poles with our planet’s oceans would render sea water drinkable. It would, Fourier suggested, taste like lemonade.