10 Mystifying Things Your Dog Does, Explained

They’re man’s best friend, but how many humans know what makes their dogs tick? Probably not enough, that’s how many. And given how much of their behavior is intended to communicate—with us, no less—we ought to have our tails between our legs.

Here are 10 things you’ve seen your dog do but haven’t the faintest clue why. Contrary to popular belief, dogs don’t hate cats. After all, they’re perfectly capable of sharing a household. So why do they chase them so aggressively?

The reason is your dog’s hunting instinct. Some breeds, especially herders and hunters like Shepherds and Retrievers, chase cats more than others. But even toy breeds instinctively hound moving objects—whether it’s a ball, a stick, or a cat. And, unlike balls and sticks, cats instinctively flee, which of course makes matters worse.

There’s also a language barrier between cats and dogs. While a dog wags its tail to show willingness to interact, a cat usually wags in irritation. In other words, Catese for ‘Go away’ is Doggian for ‘Wanna play?’. Hence dogs have chased cats for millennia. 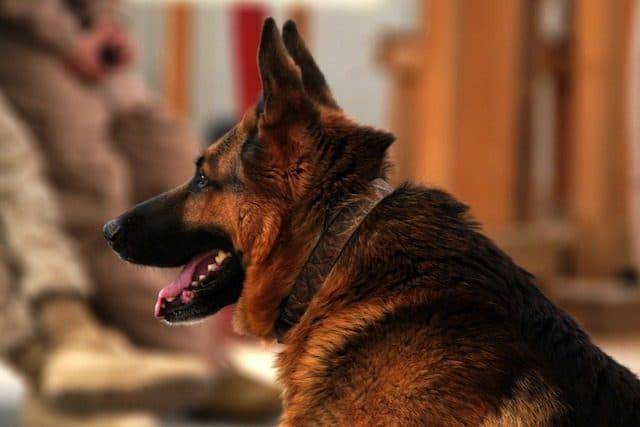 Ever wondered why your dog pants even when they’re just sitting still? Most of the time they’re not out of breath, they’re usually just hot or dehydrated. Dogs don’t sweat like we do (thank goodness), so they pant to keep themselves cool. What’s happening is they’re rapidly taking in air and humidifying it before exhaling so it evaporates from the nose and lungs—cooling the body from the inside out.

Obviously they need plenty of air and access to water for this process. It’s how dogs can die within minutes from heatstroke when left in hot cars—even with the windows cracked open. They just don’t have enough air.

This isn’t the only reason for panting, though. Depending on the context, it could also indicate excitement, stress, or pain. Sometimes it’s a side effect from medicine. It could also be indicative of a toxic or allergic reaction. It’s important to be aware of all the possible causes so you know when your dog is in danger. When your dog licks you, it’s usually a greeting. Nothing mystifying about that. But if that’s all it is, why don’t dogs lick each other instead of going straight in for their customary butt sniff?

It’s because it’s a puppy behavior. In the wild, when a mother returns to her pups from a hunt, her dependents will lick around her snout—prompting her to vomit up some food. That’s basically what you are to your dog, a lifelong mother. By providing for all of their needs, we encourage a permanent puppyhood. Such retention of juvenile behavior into adulthood is called ‘neoteny’. Another example is how vocal domesticated dogs are (like puppies) compared to dogs in the wild.

Keep this in mind if you’re licking-averse. Punishing your dog for licking your face is cold as well as confusing. The best thing to do is let them at it. But if you really don’t like it, try covering your face and rewarding when they lick your hand instead. Or teach them an alternative greeting. Dogs dig holes for any number of reasons, not just to hide bones like their pre-domesticated ancestors.

One key reason is their instinct for denning. Outside, a hole would keep them sheltered from cold weather and cooler in hot. This is also the reason why you might see your dog scratching as though digging indoors—particularly on their bed. Another reason, especially if your dog was bred for hunting, is an instinct to catch prey (such as gophers) in burrows.

Yet another reason, though, is stress relief. Separation anxiety is common in dogs and if they’re left on their own in the yard all day, they’ll often channel that stress into digging. It keeps them occupied, like OCD. At least until you come home and scold them for a behavior you didn’t understand. It’s a common understanding that dogs eat grass when they want to throw up. You may have seen your own dog chewing the lawn until they vomit yellow foam. This is bile, which builds up overnight and irritates the stomach when it’s empty. The solution is a small evening meal.

But this isn’t the only reason dogs eat grass—or even the primary reason. In fact, according to a study, only 22 percent eat grass until they vomit, and only nine percent seem ill before they start. Clearly, something else is going on.

Aside from boredom, the main reason why dogs eat grass appears to be dietary deficiency. Grass contains a number of vitamins, minerals, and nutrients that they may not be getting from their food but which, instinctively, their once-wild bodies crave. It’s been suggested that fiber is a big one.

5. Tilting their head at you

When dogs tilt their head, you can almost hear a Scooby Doo “huh?”. And that’s kind of what it is (assuming they don’t have a medical problem). Head-tilting usually just means dogs have heard something they don’t understand—but want to. For many breeds, it compensates for their ears. Dachshunds, for example, with their flaps, might tilt to uncover the ear canal.

But there’s probably more to it than that. After all, hearing isn’t exactly a handicap for dogs; it’s one of the ways they’re better than us. So actually what we’re seeing when they tilt their head may be super hearing in action. According to some experts, dogs tilt their heads to triangulate the source of a sound.

Obviously this doesn’t explain why they tilt their head at us. Unfortunately it’s not entirely clear. However, it may have to do with their vision, with head-tilting compensating for snouts. That may be why Bulldogs and other short-nosed breeds tilt their heads less than others. It may also be that you’ve unwittingly rewarded this cute dog behavior in the past, encouraging them to do it more often. All dog owners know the stresses of a thunderstorm. All of a sudden, it’s like your happy-go-lucky best friend is in need of some serious counseling—especially if storms are rare where you live. They’re also likely to be more afraid if their first 14 weeks of life (their socialization window) fell outside of storm season. You freaking out also doesn’t help.

Interestingly, though, it’s not just the noise. Primarily, it’s the static electricity, which runs through their fur and causes discomfort. In fact, it can even cause shocks.

This is why they hide. It’s not to evade some unseen threat; it’s to ground themselves and minimize the static. Knowing this, there are ways we can help—such as guiding them to a good grounding spot or rubbing their fur with an unscented dryer sheet. It’s important not to be too overbearing, though, since your dog is already unnerved.

3. Moonwalking after doing their business We’ve all seen it, that strange ritual habit of scratching the ground with the hind legs after taking a dump. To the uninitiated, it looks like an instinct to bury their do-do, hiding their tracks from other dogs. But it’s actually the opposite. Dogs’ toe pads are some of the only places on their bodies with sweat glands, so by wiping them on the ground they’re deliberately leaving their scent. Meanwhile, digging in at the same time with their claws leaves a clear visual mark for other dogs to find. The stronger the mark, the more impressive the dog—which is why they “sign their art” with such gusto.

You see, for dogs toilet time is a social occasion; every deposit is packed with information. You may want to bear this in mind next time you catch them eating poop. Not only is it a behavior they learned from their mother, they’re communing with the neighbor dog that left it. (If nothing else, there’s minimal risk and it can even provide nutritional value.)

Dogs sniff pee for much the same reason: Gathering intel. In fact, so data-rich is a puddle of pee that while dogs usually fail the traditional self-awareness test (e.g. putting them in front of a mirror with a mark on their body to see if they try to shake it off), they can easily identify their own urine. It depends on the speed and position. According to PetMD, a slightly upright tail wagging at moderate speed is Doggian for “I’m happy.” As it gets faster and faster—becoming the so-called ‘helicopter tail’—it tells you they’re super excited. No surprises there. But did you know that when the tail is arched over the back it indicates aggression? In this case the speed of the wag is a measure of how much the dog wants to bite you.

There’s also an important difference between wagging to the left side or right. It doesn’t matter what breed your dog is; when their tail is wagging slightly to the left, it means they’re feeling anxious, and when it’s wagging slightly to the right, it means they’re feeling friendly. And as pseudoscientific as this sounds, it has been extensively studied—particularly in the context of left-right asymmetries in the brain.

1. Walking in a circle before lying down The received wisdom as to why dogs circle their bedding, or the couch, or the floor, or wherever they’re about to rest, is that they’re scanning the horizon for threats. Another common theory is that they’re scaring off vermin and pests. But, according to research, the explanation is actually pretty simple: They’re treading out bumps. Animal psychologist Professor Stanley Coren found dogs were three times as likely to circle on uneven bedding.

But why then do we also see dogs walking in a circle before doing their business outside? Scanning the horizon, right? No. Strangely enough, studies show a clear preference among dogs for pooping in alignment with the Earth’s magnetic field—at least for the fifth of the day when it’s stable. More specifically, they like a north-south alignment and avoid east-west.

Researchers aren’t sure why. Maybe dogs just feel better this way. Other animals, including birds and cows, also align themselves with the magnetic field of the planet. Whatever the reason, though, it seems fair to assume that it also comes into play when they’re circling for rest.