The modern prison system has been criticized all around the world. There are few countries that couldn’t benefit from some kind of prison reform. That said, at the very least most modern prisons don’t hold a candle to those of the past. In a bygone era, sometimes one that was only a few years ago, many prisons kept inmates in check with the kind of security that could break a spirit as easily as it broke the body. 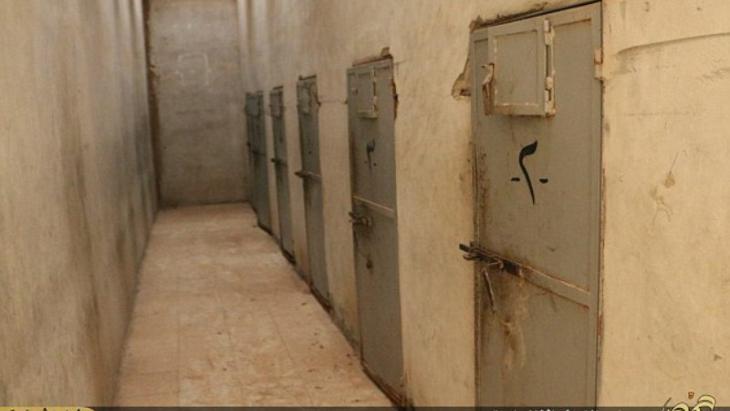 Located in Syria, Tadmur was built in the 1930s. The extensive amount of abuse that went on there is staggering. One writer has claimed that it’s not even fair to call Tadmur a prison because a prison is supposed to follow rules and afford you rights. Tadmur is a place where people are tortured and summarily executed.

Political prisoners started being housed in the prison back in the 1970s and murder was par for the course. The most brutal example took place after a failed assassination attempt against Syrian dictator Hafez al-Assad. Soldiers flew to the prison immediately afterwards and went cell to cell, murdering everyone. It’s estimated that as many as 500 to 1,000 prisoners were gunned down in just minutes. Their bodies were tossed in a pit outside.

Guards would welcome new inmates with a round of beatings. Inmates could not lift their eyes from the floor unless they wanted a beating, they had to distinguish guards based on their voices. Beyond physical torture, humiliation was common as well. One inmate told of being forced to move 100 pairs of slippers across the room with his mouth, an extra insult to someone of the Muslim faith for whom shoes are considered unclean and are not even allowed to be worn in mosques. The French fortress known as the Bastille was built to be a bulwark against the English forces that might attack during the Hundred Years War. Under the reign of King Louis XIII it was converted to a prison to house his enemies. Most famously, this was the home of the prisoner known as the Man in the Iron Mask, a prisoner whose identity is still not known to this day.

Unlike other prisons, which were infamous for their harsh conditions, the Bastille was an oddly accommodating prison for the upper crust of French society who had been deemed criminal. The inmates were actually allowed to furnish their cells and they even had luxury cuisine. They were eating better than the common folks at the time.

Inmates of the Bastille could have their own clothes and books brought from home, and some even had servants attending to them. It was a far cry from the sort of prison experience most have.

In time, the prison opened its doors to more than just the aristocracy and those who were not as well to do did not receive the same four-star treatment. The subterranean cells for the lower classes were dirty and rat-infested

In 1789, the Storming of the Bastille took place when Revolutionaries attacked the prison as a symbol of the abuses of the crown’s authority. There were only seven people imprisoned in the Bastille at the time, but the building was iconic and symbolic of the French royal authority. This became a major event in the French Revolution. Few prisons have become better known in American history than the Rock itself, Alcatraz. The infamous prison has become so legendary it’s a tourist attraction and was even the featured location of a Michael Bay movie back in 1996.

What made Alcatraz so famous was a combination of both its location and its inmates. Located on an island, the prison was considered inescapable. The surrounding waters were notoriously cold with brutal currents. And traversing them would only be possible if an inmate could reach the water, which meant getting past the intense security. In over a dozen attempts, no one ever successfully made it out. That said, five inmates vanished, and it was assumed they drowned but no one knows for sure as they were never seen again.

Famous residents included the Birdman of Alcatraz, who most people forget was actually a murderer and gained most of his bird-related history in Leavenworth, not Alcatraz. Al Capone was also housed in Alcatraz.

6. The Tower of London Possibly the most famous prison in history next to Alcatraz, the Tower of London was where the rulers of Britain sent their most famous prisons to be forgotten. And they did so for the better part of a millennium. The tower first saw use as a prison back in the year 1100. It was last used as a prison in 1952. That’s 852 years of punishment, which is a hell of a run by anyone’s measure.

Located on the Thames in London, the Tower has held such famous residents as King Henry VI, Elizabeth I and several wives of King Henry VIII. These days, also like Alcatraz, it’s a tourist spot said to be haunted by the ghosts of the damned. That said, despite its incredibly long history as a prison, only a surprisingly few people were ever actually executed there before the world wars. Just seven people met their end in the tower as most state executions took place on Tower Hill. Of course, there was also a period of time when prisoners in the Tower were tortured on the Rack.

Once the wars started, the Tower was used with some renewed vigor. A dozen executions by firing squad were conducted against spies from Germany. After the Blitz the Tower was damaged and in later years it became open to the public. Located in French Guiana, Devil’s Island prison was where people went to die. In one hundred years, over 70,000 prisoners were sent to the island but only 5,000 ever left. Forty percent of those who arrived never even saw their second year. Conditions were as harsh and brutal as anywhere in the world.

Prisoners were shackled all the time, and at night they were chained to bars in their tiny cells. Most were malnourished, and the island was also swarming with mosquitoes and a host of tropical diseases that laid waste to the prison population.

Prisoners would kill each other or die during escape attempts as well, most of which the guards let play out so they didn’t have to trouble themselves. Escape was impossible, and murder between prisoners was not something they cared about. The dead were dumped into the sea to be eaten by sharks. Also known as the Hanoi Hilton, this is the Vietnamese Prison where US prisoners of war were held during the Vietnam war . The prison was actually built by French colonists in the late 1800s. The name translates to something akin to “Hell Hole” so it’s no surprise this was not a pleasant place to be.

Torture, starvation and murder were all methods of punishment used on POWs in the prison, though the Vietnamese government has long denied those claims. Former residents of the prison detailed beatings, rope bindings, a total lack of sanitation, and extensive solitary confinement. Many soldiers were forced to write letters that said the opposite, referencing how kind their jailors were. Others gave similar statements on film, all part of an effort to gaslight prisoners and those stateside.

When you want to paint a picture of a harsh prison these days, you describe the strict regime and close quarters. Places like ADX Florence, where prisoners only have a small, isolated room in which to live. But prisoners from Urga prison in Mongolia probably would have lived the freedom and space of ADX Florence compared to what they endured.

One hundred years ago ,if you went to Urga, you were going to be put into the Box of Death. Inmates were essentially confined to coffins for their stay. The four foot long boxes were not long enough for a person to even stretch out in. At two-and-a-half feet high, a prisoner could not sit up in them, either.

A six inch hole was where food was dropped in. It was the only source of light. There was no bathroom, but they cleaned the box every few weeks from human waste. Every prisoner was subjected to these boxes, no matter the crime. Lesser crimes would see a person get out in weeks or months. Greater crimes often ended in the death of the prisoner.

Romania’s Pitesti Prison was, by all accounts, worse than any horror movie you could imagine. The level of torture and abuse that occurred under the roof of this building was bone-chilling. From 1949 to 1951 the government sent political threats here, those who opposed the communist regime. Many of these enemies of the state were just students protesting government mistreatment.

The Pitesti Experiment, as it was called, was a method of re-education by torture. Prisoners were forced to torture each other. The goal was to make people give up their religious or political beliefs. Prisoners were beaten, degraded and humiliated. Those who didn’t confess were tortured even more.

Humiliation methods included “baptisms” with urine and feces as a way to mock religious affiliations. They would be nearly drowned in it and forced to consume it as well. They would be beaten and burned and many suffered serious wounds and diseases like leprosy.

Though the prison’s time was short-lived, the abuse was some of the worst ever documented.

Russia has a reputation for being cold and not just in the temperature way. Russian justice is sometimes seen as unduly harsh and brutal. The word “gulag” comes from Soviet Russia, after all. So maybe it’s no surprise that one of the most brutal prisons in the history of mankind is not just from Russia, but is currently up and running as a home for the worst criminals Russia has to offer.

Known as Black Dolphin because cool code names are cool, the prison has served as a hard labor facility since the mid 1700s. Today it’s where Russia sends terrorists, serial killers, cannibals, and the most monstrous criminals the country has. It is the most secure facility they have and according to at least one official, the only way you can escape is by dying.

Every 50-foot square cell in the prison holds two inmates. Three steel doors need to be opened to access these cells. Prisoners get 90 minutes of exercise time in a cage every day then it’s back to their cell. When they’re walked from their cells, they’re restrained and bent at the waist to walk hunched over. If they go outside, they are blindfolded so they cannot learn the prison layout.

For 16 hours a day, the inmates can just stand in their cell or sit on a stool. Lying in their bunk is not actually permitted. That harsh treatment is Russia’s balance of the harm the inmates have caused. The combined death toll for all the killers under their roof is 3,500. That works out to an average of five murders for every inmate.

Cameras are on 24 hours a day and guards make rounds every 15 minutes. Meals are soup and bread given inside the cells. Apparently, no one has ever complained about mistreatment at the prison.At least according to the Russian government.