Jaws was scary, but also a little overrated. After all, the movie was only about an aggressive shark. Just one simple shark? Pfft. How about a gigantic fish that looks like a minnow, but is almost 30 feet long and can shear almost any living creature in two? Or an archaic piranha that makes modern piranhas resemble trout fry? Or just take the plunge with us and discover the worst prehistoric predatory fish to meet.

Extinct, approximately Orca-sized, and equipped with massive, flesh shearing teeth, Rhizodus hibberti were enormous ancient rhizodonts, giant lobe-finned ancient fish that could defy imagination with their sheer ferocity, making most sharks look tame in comparison. The huge freshwater dwellers that approached 30 feet were generalist predators and the largest freshwater fish ever known. While many modern day giant fish are gentle giants, such as basking sharks and manta rays, these giant rhizodonts were both massive and very violent in their behavioral adaptations. An ambush foraging strategy combined with incredibly robust musculature allowed lunging attacks to take down large prey. These rhizodonts counted large fish and huge prehistoric amphibians among their prey, and would have had no trouble making short work of humans had a hypothetical encounter come to pass.

Fossils of this terrible creature have been found in Europe and North America, preserved as their historic lake and river habitats gave way to sedimentary deposits. The dentition of the species was most impressive, consisting of highly robust as well as sharp and numerous flesh shearing teeth. Each tooth was firmly anchored in the jaw bone compared to the loose dental system of sharks.

Piranhas are not huge, just toothy, but combining the ferocity and bite force of a piranha with the size of a small shark has defined horror movies for years. But prehistoric times offer a reality that makes present day piranhas look like guppies in comparison. Megapiranha reached more than three feet in length. Interestingly, both modern piranhas including the Black Piranha and Red-bellied Piranha, as well as the imposing Megapiranha, are close relatives of famed tiny living jewels found in home aquariums, namely Neon Tetras and Cardinal Tetras.

Megapiranha may have been huge, but unfortunately they vanished from the Earth while leaving just enough of a trace for a rough approximation of their natural history to be gleaned from the paleontological logbook of nature. Front upper jaw remains indicate the creature was likely a carnivore but also may have engaged in herbivorous behavior, possibly more-so than modern piranhas, which are known for omnivorous dietary characteristics. Lengths of over three feet are estimated based on the dimensions of the remains, which were first described in a discovery out of Argentina in 1900. 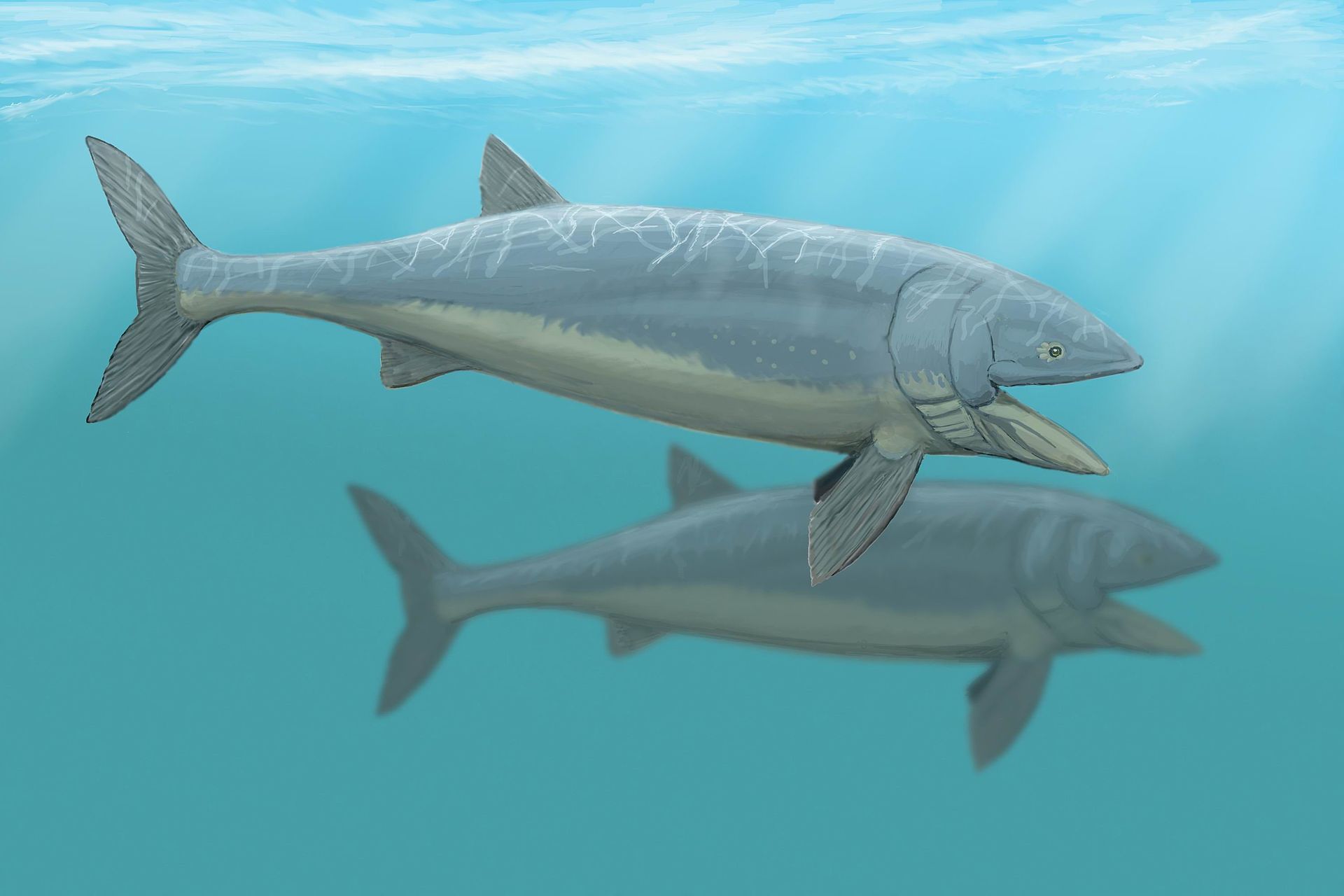 Imagine opening a can of sardines. Except this time, you’re back in the Jurassic era and the can of sardines is about 50 feet in length. What did you order? As you open the can, it contains a single, herring-like fish that is about 50 feet long itself. This is Leedsychis problematicus, a bizarre fish that holds the record among all aquatic creatures known as the king of bony fish. The largest bony fish ever to evolve in the course of natural history, the huge Leedsichthys sea beasts looked deceptively normal, just like humungous herring, except it was larger than many whales and even the largest of modern sharks.

Fossils of the giant creature have turned up in England, Germany, France, and South America. A filter feeder, the giant was gentle but startling in its appearance, equipped with a gaping mouth and disproportionately long body. Measurements were once thought to be 90 feet, but further investigation showed that the species, while still gigantic, topped out at about 55 feet in length. The gill rakers from this species are so large that they have been mistaken as being larger bones of many other species, even flying reptiles.

Do you think evolutionary history is full of oddness? It is, but we’re not talking rainbows and unicorns here. Or actually, are we? Enter the creature you could definitely call the “unicorn shark.” Xenacanthus represented a prehistoric shark genus that uncannily resembled a hybrid between a unicorn and a shark. Exceptionally primitive, the peculiar creatures existed in the late portions of the Devonian time, holding out against extinction until the wind-up of the Triassic, more than 200 million years ago. Species such as Xenacanthus dechini were indeed bizarre, but not overly rare niche creatures by any means.

Occuring in freshwater, the sharks have left their bones lying around the globe with 21 different species represented. The sharks grew to about three feet in length, but went far beyond modern sharks in their eerie anatomy. An exceptionally sharp, unicorn-like spine projecting from the top of the head is speculated by some researchers to have borne a potent venom, comparable in physiology to the venomous spines of stingrays like the one that caused famed “Crocodile Hunter” Steve Irwin’s untimely death. The teeth of the “unicorn sharks” allowed armored fish to be crushed, while the swimming motions of the fish recalled modern Conger Eels.

Frequently dubbed the “Sabre-tooth Herring,” Enchodus petrosus from the Late Cretaceous and the Eocene looked like a herring or sardine from the supermarket, but was a monstrous 4.9 feet in length. This nearly 5-foot long predatory creature sported an unsettling assortment of extremely sharp teeth that could measure well over two inches in length. Few small to medium-sized fish would have been immune to attacks by the largest Enchodus, named to mean “spear tooth.”

Occurring all around the globe, the fish are related to salmon — in fact, more closely than the herring they are colloquially named after. To the amateur paleontologist, from a finding of fossil remains (which are extremely numerous as far as fossil remains go), first impressions could stir hopes of having found the teeth of a deadly carnivorous mammal rather than a fish. A hypothetical encounter with a human swimmer could have proved devastating given the biting power of the fish, speed and agility. The jaws angled downwards, which suggests attacks from below were common from a morphological analysis standpoint. Resembling grotesque versions of a Koi fish, or a very chubby salmon to a certain degree, the prehistoric yet rediscovered living fossil species West Indian Ocean Coelacanth and the Indonesian Coelacanth are classic examples of how supposedly extinct species can be discovered living. Another Coelacanth type, known only from fossils, makes the two living Coelacanth species look tame by comparison. Growing to five feet in length, Chinlea genus members were not only sizable but had a shark-shaped head with a tapered snout that contained large, powerful shearing teeth, which were impressively sharp.

The ancient fish were alive in the Triassic and have been found as fossil remains in Arizona and Texas. As lobe-finned fish, Coelacanth genera and species such as Chinlea genus members are actually more closely related to primitive lungfish and the tetrapoda, a superclass that includes creatures like frogs, birds, and yes, humans. Chinlea are noteworthy for the robustness of their scales and the tapered build that included streamlining all the way to the tail. Few prey targeted would be to escape a swift attack and firm biting grip. The weight of the fish reached around 150 pounds.

Sometimes, nature creates a type of animal that recalls a weapon more than a typical animal. Fish evolution back in the Devonian epoch at 370 million years ago produced extraordinary results in the form of the Eusthenopteron genus of predatory lobe-finned fish. In Greek, the genus name means to have strongly-developed fins, which it certainly achieved. The members of the Eusthenopteron genus were aggressive carnivores that looked startlingly similar to the military hardware familiar today as either airborne cruise missiles or underwater weaponry such as the torpedo. Miguasha National Park in the Eastern Canadian province of Quebec contains numerous fossil remains.

Long-bodied, the fish reached between five and six feet in length. Their broadly-shaped skull housed numerous sharp teeth. Furthermore, the jaws were lengthy, with toothy rows extending far back into the head. The presence of the numerous median fins, located to the rear of the body, just ahead of the caudal or tail fin, is the most startlingly aggressive element in the fish’s body plan. These fins are responsible for the militaristic look of the creature as well as giving genus members a huge leg up — or rather, fin up, we should say — in fast acceleration in pursuit of prey. The creatures succeeded in combining streamlining with exceptionally efficient musculature to become fearsome hunters in their time.

A terrifying lobe-finned predator type, Hyneria represented a genus of hunting fish that could reach more than 12 feet in length. At such great sizes, ferocious attacks were aided by correspondingly massive dental development. Two-inch-long teeth occurred in the larger specimens. Robust scales and incredible levels of musculature allowed Hyneria attacks to bridge the gap between the marine and the terrestrial, putting shoreline prey within the reach of hungry Hyneria.

The fish were first discovered in Pennsylvania, near the town of Hyner, for which they are named. Hyneria were freshwater fish with the ability to hunt in even lower quality water, which would have had limited visibility. Had Hyneria existed alongside humans, the danger would have been immense. A variety of ancient amphibians as well as other fish featured prominently in the diet of Hyneria species, which could lung from the water to capture prey that had mistakenly relaxed just after leaving the water, or were detected loitering at the water’s edge. 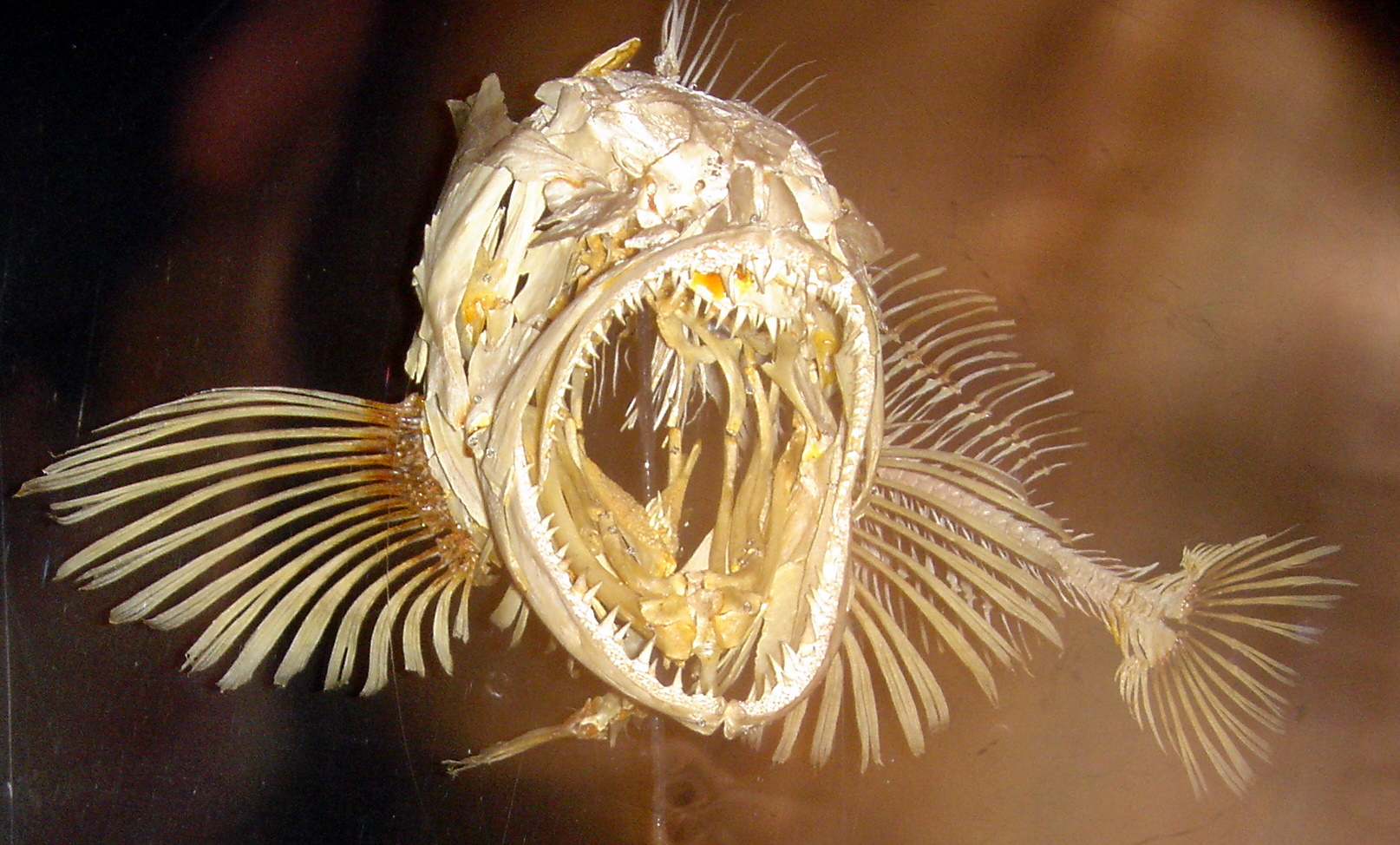 Prehistoric fish come in a variety of forms and one of the more interesting ones is an ancient and obsolete giant lingcod. Neither a cod nor a ling, but named for their resemblance to the two species, lingcod are voracious predators armed with powerful musculature, a shield-like face and sharp, prey grasping teeth. Once caught, their tremendous swallowing capacity ensures no escape and the completion of a good meal.

The archaic giant lingcod species Ophiodon ozymandias was discovered as fossil remains in Southern California with origins dating back to the latter portions of the Miocene epoch. (Note: the above picture is not of this particular creature, but similar lingcod remains.) This fish was able to reach six feet in length, hiding from larger predators and concealing itself from potential prey with camouflage, stealth, and a bottom-dwelling lifestyle. The fish was genetically a member of the greenling family of bony fish. Evolutionary history shows a pattern of many larger species such as Ophiodon ozymandias died out, leaving only smaller relatives in modern times.

Limestone deposits of southern Germany have revealed a startling secret from the ancient evolutionary history of bony fish, close to where the primordial bird Archaeopteryx was first found. The remains of a small but truly terrifying little fish, which has been named in honor of piranhas and to recognize its behavior, namely as a “fin cutter.” Piranhamesodon pinnatomus was discovered as a small fossil equipped with exceptionally sharp flesh-slicing teeth and the dollar-like body plan of a piranha. Nearby were the remains of the prehistoric fishes’ victims, showing strange flesh wounds and shearing bites.

It appears that the fish was a sort of parasite that often did not kill prey outright, but simply bit off pieces of fins and flesh. The creature dates back to approximately 152 million years ago in the Jurassic era, but was just discovered recently — so recently that the findings were first published in Current Biology in October 2018. The flesh-eating behavior of the fish is highlighted as an example of convergent evolution with piranhas, but vastly pre-dating their arrival in the evolutionary timeline. Germany’s Jura Museum now hosts an exhibit to the small but vicious little fish.