Alton, Illinois is a small town of just over 26,000 people and is located about 25 miles north of St. Louis, beside the Mississippi River. Alton has been named “America’s Most Haunted Small Town” and for good reason. With a dark history of war, death, and murder, it’s no surprise that this town is known to have many restless spirits that haunt many of the locations.

There are many locations around Alton that have reported paranormal activity, such as the school, local cemeteries, the old prison, and the infamous McPike Mansion, as well as a local legend that describes a mythical creature that is said to be lurking around.

There have been countless reports of paranormal activity plaguing this small town, so let’s take a look at 10 of the reasons why Alton has been named America’s most haunted small town. The Alton Prison was first opened in 1833 and was the first Illinois State Penitentiary. It was later closed in 1860 but was reopened two years later as a military prison. The majority of the prison’s population were Confederate prisoners and it is estimated that over 11,000 of them were brought to the jail in just three years.

The conditions at the prison were horrible for the inmates and the death rate was above average. In addition to the inmates being malnourished, the prison was overcrowded, which meant that sicknesses such as pneumonia were quite common, but the deadliest and most feared was smallpox. There was a quarantine hospital that housed the inmates with smallpox on an island across the Mississippi River which is now completely under water. At least 1,500 prisoners and soldiers are said to have died as a result from the smallpox outbreak.

The prison closed in 1865 and the buildings were eventually torn down and the land was turned into a park. When the prison was torn down, many of the stones were used in the construction of other buildings in Alton. Those stones, which are said to hold a lot of residual energy, are blamed for many of the hauntings around town. 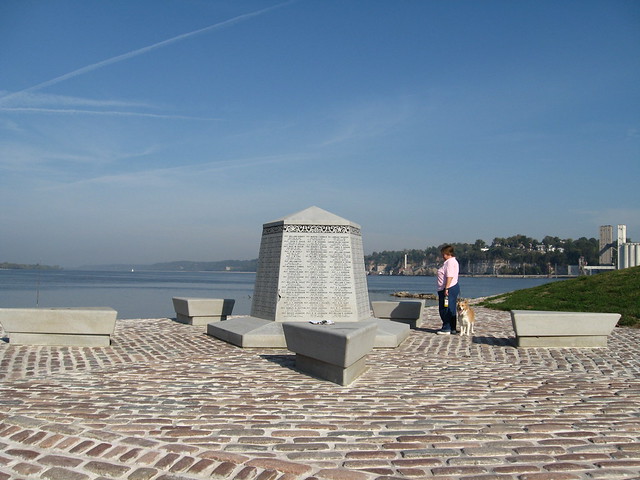 In 1863, when the smallpox outbreak was more than the prison could handle, those who were infected were sent to Sunflower Island which was located across the Mississippi River and was ideally quarantined. When the infected prisoners reached the island, they were housed in a small rundown cottage which was used as a hospital. The cottage/hospital, which was nicknamed “pesthouse,” quickly became overcrowded. A prison guard reported that up to 60 people a day died as a result of smallpox. In fact, it is estimated that between 1,500 and 5,000 people died in total. Over 300 of them died on the island.

In 1936, the island was plowed over in order to make way for a new dam and locks. Not only was the island plowed over and destroyed, the 300+ remains of the prisoners who were buried there were disturbed. What’s even more disturbing is that the dirt as well as the skeleton bones from the deceased were used as fill for one of the embankments. In 2002, a monument was placed at the dam site to remember those who died, but that’s little comfort to those whose resting place was destroyed, which is a perfect recipe for restless spirits to roam.

After the St. Matthew’s Catholic Church burned down, the First Unitarian Church was built on the same site in 1836. Then in 1905, that church also burned down. Both of those churches were stations on the Underground Railroad.

The church that currently rests at that location is said to be full of paranormal activity. The most notorious spirit is that of Phillip Mercer, who was a former pastor who committed suicide in 1934 by hanging himself from a window transom in the hall located behind the auditorium. The reason for his suicide remains unknown. Many people have reported seeing the pastor in the church.

Other claims include hearing voices in the basement, hearing the sound of a piano playing in the sanctuary, seeing shadow figures, and doors that open and close on their own in the hallway. 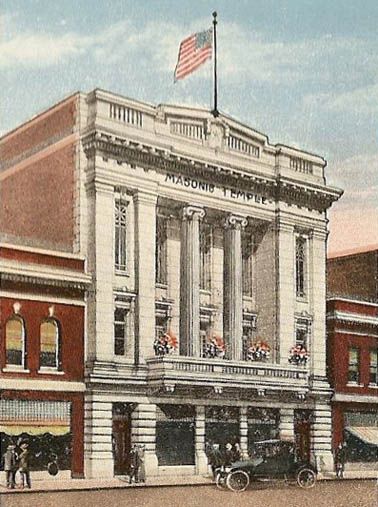 The Piasa Masonic Temple building dates back to 1844 and was formerly the location of the “Spirits Lounge.” While the building itself is said to look spooky from the outside, it is even creepier inside, where there have been several reports of paranormal activity. People have reported experiencing unexplained activity in the second floor meeting area. Another hot spot for hauntings is the basement where the spirit of a Confederate soldier has been seen and it is thought that he had died at the prison.

One of the rooms in the building has a mirrored bar which is located underneath a balcony. The orchestra pit area is said to be especially haunted, with a figure being seen several times floating in front of the balcony. 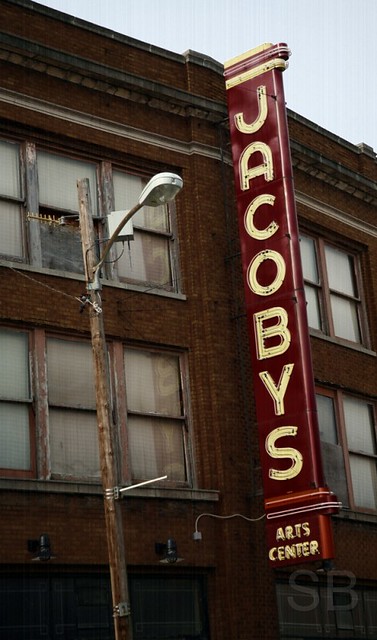 The Jacoby Arts Center was first opened in 1883 and was originally used as a furniture store, as well as a funeral home. The actual name of the business was “Jacoby Brothers Furniture Store and Funeral Home.” The second floor of the building was used as a funeral chapel and viewing area. And the basement, which is said to be the most haunted area of the building, was used as a morgue. In addition to the already haunting atmosphere that resides there, another eerie fact is that they even sold caskets.

People who have visited this location, particularly in the cellar, have reported feeling cold spots, as well as sensing a presence around them. Some visitors have even heard the sound of the intercom, which has been disconnected for many years.

A common legend around the Alton area is that of the Piasa bird. The legend dates back to 1673 when Father Jacques Marquette journeyed down the Mississippi River and described seeing a bird-like monster in the area where Alton is located.

In his diary, Father Marquette described the Piasa as being “as large as a calf with horns like a deer, red eyes, a beard like a tiger’s, a face like a man, the body covered with green, red and black scales and a tail so long it passed around the body, over the head and between the legs.” The Piasa, which means a bird that devours men, was given its name by the Illini Indians. Legend has it that the dragon-like bird has terrorized and devoured some native residents.

There was a painting of the Piasa which was located on the bluff north of the city of Alton on the Great River Road and was a well-known local landmark. However, after becoming damaged from the weather, along with receiving more traffic in the area, the painting was taken down in order to be restored and relocated. With help from locals, businesses and the government, the painting was restored and is again resting over the River Bend.

The Confederate Cemetery & Memorial is the final resting place of countless Confederate soldiers who are buried there. While the soldiers have no individually marked graves, there is a 58-foot-tall granite obelisk, which is dedicated to the soldiers who lost their lives. Many of these restless spirits are said to roam the cemetery.

Another frightening location is the Alton City Cemetery which is said to be haunted by numerous ghosts. One of those spirits is that of a 9-year-old girl named Lucy Haskell, who died from diphtheria and is often seen wandering around the Hayner/Haskell monument. Lucy is mostly seen by children who visit the area and she is said to be quite curious and playful.

Another claim is that of a woman wearing black, who has been seen wandering the hallways of the Grandview Public Mausoleum located inside the cemetery. While the mausoleum is not open to the public anymore, it is unclear whether her spirit still roams the location.

One of the most common sightings at the Alton City Cemetery is that of abolitionist Elijah P. Lovejoy, who was shot at a pro-slavery riot that took place in 1837. People have seen his ghost near his monument, along with feeling cold spots in that same area.

The Milton Schoolhouse was originally built in 1904 and had just four classrooms. It expanded over the years and ended up being a 55,000 square foot building that accommodated elementary and middle school children. It closed, however, in the 1980s and later became the location for a manufacturing business. After the factory closed, that’s apparently when the hauntings began.

Rumor has it that a young girl was murdered in the building and a janitor committed suicide. One day, a young girl who people call “Mary” stayed late after school to finish some work but was found the next morning brutally murdered in the girl’s shower room, which was located in the basement of the school. Police tried hard to find the murderer but they didn’t have any luck until someone noticed that the school janitor hadn’t shown up to work in several days. Since the police had proof that Mary had scratched her attacker, they quickly noticed scratch marks on the janitor’s hands. A few days later, the janitor was found hanging from a beam in the upstairs hallway of the school. He had committed suicide. There was also a note found near his body that read “I did it!”

Witnesses have reported seeing unexplained shadows, hearing footsteps and strange sounds, along with seeing the spirit of a small girl who many believe is Mary.

Once an elegant hotel and spa, the Mineral Springs Mall was originally built in 1914 and is said to be one of the most haunted locations in Alton with a history of many deaths, including murders and suicides.

Several people have claimed to have seen the ghost of Clarence, who is said to have been a 17-year-old young man who drowned in the pool. The apparition of Clarence wearing a brown suit is seen near the pool area. Another incident in the pool area is that of a girl named Cassandra, who supposedly drowned during a birthday party and is said to play with some of the toys (especially marbles) that visitors leave for her.

Another entity called Mary has been nicknamed the “Jasmine Lady” because people often smell the scent of jasmine when her spirit is around. Mary was killed in the hotel by falling down the stairs.

“Charlie” is often seen where the former hotel bar use to be located. He was said to be a big drinker who reportedly racked up such a high bar tab that in order to pay it off he was required to paint a mural, but committed suicide while working on it.

In addition to seeing apparitions, voices have been heard throughout the location, as well as seeing orbs of light.

The McPike Mansion was originally built in 1869 and the first owner of the house was named Henry McPike. Nobody has lived in the house since the 1950s, but the spirits are said to still be occupying the house to this very day.

It is said that there has been paranormal activity at that location since long before the mansion was ever built. It is believed that there are Native American spirits hanging around that location, and there could also be a residual haunting from an alleged Underground Railroad stop.

People have claimed to have seen the ghosts of servants and cooks in the mansion, as well as Eleanor and Henry McPike – the original owners. There is also an eerie story of a woman who mysteriously died in the bathtub. The cellar, in particular, is one of the most active spots in the house. Several people have caught balls of light and orbs in pictures that they have taken, as well as apparitions seen in the windows. In fact, it is said that over 11 spirits reside at the McPike Mansion.