Shame is a powerful emotion, a fact a number of enterprising businesses and government entities have taken full advantage of over the years in an attempt to curtail obnoxious and inconsiderate behavior. Join us as we chronicle some of the more amusing examples we could find of people weaponizing shame to make the world a marginally better place for the rest of us.

Few things are more infuriating than trying to watch a film while some tool stares at 3 inches of glowing plastic while loudly talking in a tone of voice that screams “My head yearns for a solid, well-placed slap.” After realizing that polite notices and silent, disapproving looks from other cinema patrons simply wasn’t cutting it when it came to curtailing instances of this kind of behavior, London’s Prince Charles Cinema decided that the logical next step to improve the cinema-going experience for the public was ninjas.

Specifically, the cinema gathered up a bunch of volunteers, dressed them all up in form-fitting black bodysuits and gave them permission to walk up to anyone they observed being inconsiderate during a movie and scare the living crap out of them. The idea being that the mild shock and burning shame that comes with having a ninja burst from the shadows just to silently slap your phone out of your hand would be enough to stop all but the most obnoxious or unruly customer… and it freaking worked. As effective as the scheme was, we still think the cinema should have doubled down and hired a second group of ninjas to scare the first group so that they could film it and put it on YouTube.

Imagine for a second that instead of living in a world where you’d simply be fined for being a bad driver, you instead had to worry about an omnipresent sentinel of justice silently mocking your inability to be a productive, non-stupid member of society. For citizens in several major South American cities, this bizarre scenario was a reality thanks to officials having the idea to try and reduce instances of poor or inconsiderate driving by simply paying mimes to point and laugh at bad drivers.

Amazingly, in cities where this scheme was implemented, officials saw a noticeable reduction in the amount of bad drivers on roads where mimes were tasked with silently dunking on anyone they saw flouting the law. Proof, if it was ever needed, that mimes are a necessary evil we must allow to continue existing so long as they keep using their powers for good, and not to trap people inside of tiny invisible boxes. 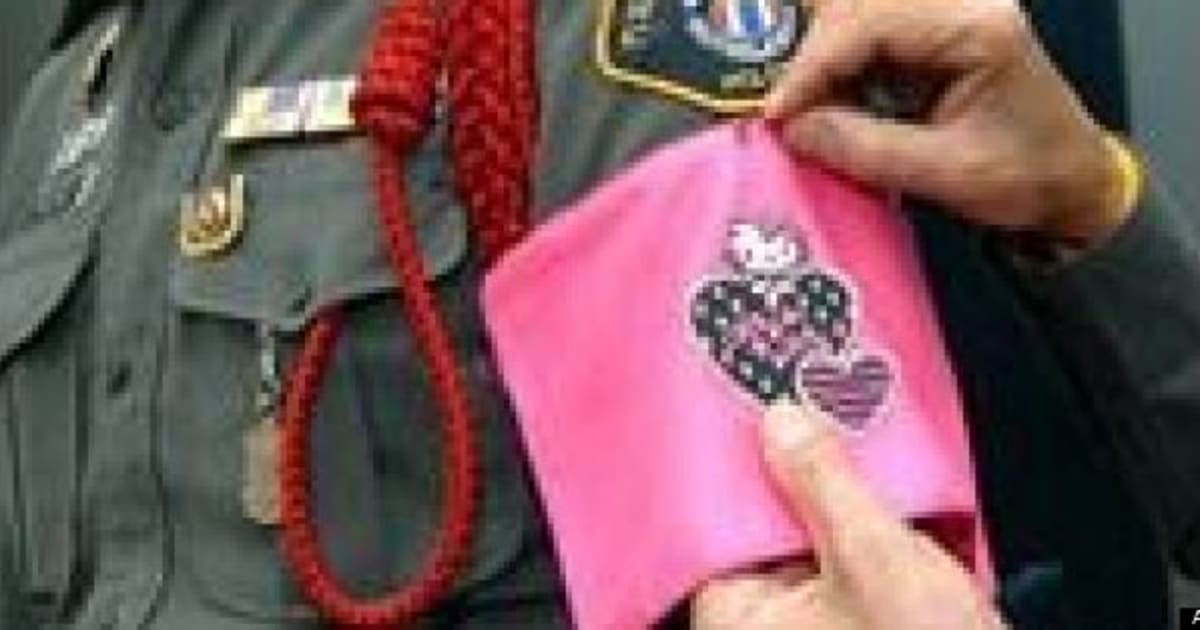 In 2007, Thai officials in Bangkok, frustrated by police officers not responding to or learning from internal behind-closed-doors punishment for breaking rules, decided to try a more visual approach to punitive measures against officers committing minor infractions. By which we mean they made them wear hot pink armbands with Hello Kitty on them.

Designed to quite literally shame officers into bettering themselves, and to remind them that they should be more disciplined when on duty, the armbands were noted as being for minor offenses only, with more serious infractions being dealt with via more traditional means. However, a Thai official did explain that officers wearing them would be forbidden from disclosing what exactly they did wrong. The reasoning behind this being that the public would be forced to come to their own conclusions about what the officer’s infraction was, and you just know most members of the public would assume it was something toilet-related.

If you’ve ever been to the gym, you’ve no doubt witnessed an exceptionally large, fridge-shaped man loudly lifting heavy weights, which he then dropped while screaming like his colon was full of snakes. Planet Fitness didn’t like this and let it be known via a series of ads (see above) that it was the official position of the company that such behavior was off-putting, obnoxious, and kind of rude.

To prevent it, the company introduced what it dubbed “lunk alarms,” essentially loud alarms designed to blare a piercingly loud siren whenever a person drops a weight or grunts in an excessively loud manner. In response to being told that their loud, aggressive posturing was intimidating to fellow gym users and that they should try to maybe cut it out, the kind of men being mocked by Fitness Planet of course responded by being loud and overly aggressive about the whole thing.

Dozens of blog posts were written following the introduction of the alarms by bodybuilding enthusiasts, most of which posed the same rhetorical question to readers: “Why would Planet Fitness want to make their gyms less appealing to people who work out the most?” You know, even though the purpose of the alarms wasn’t to do that; it was to shame people into being more mindful of the fact they’re not the only ones using the gym. Gee, it’s almost like these guys don’t like being told that nobody but them cares about how much weight they can lift. It’s probably not all that controversial to suggest that people who think dropping cigarette butts on the ground is okay should have some kind of wild animal swung at their face at tremendous speed. While this would certainly be a fitting punishment for habitual butt-droppers, most cities tend to make do with a small fine – a punishment officials in Hong Kong thought wasn’t nearly Black Mirror-y enough.

So, instead of fining citizens leaving spent butts on the ground or something boring like that, authorities began picking them up, analyzing the DNA on them, and then using this to create reconstructed images of the smoker’s face. This reconstructed image was then displayed on on digital billboards throughout the city. While admittedly not perfect, we can only hope at least one smoker saw their own face staring back at them from a billboard with a sign below it saying they suck and decided to just up and quit because smoking isn’t worth being shamed by Skynet’s granddaddy.

In Spain, following a massive influx of people defaulting on debts, debt collectors wanting to get paid hatched a rather novel solution to solve the age-old problem of people deciding that they simply didn’t want to pay their bills: dressing like Snidely Whiplash and following them until they pay up.

Thought up by El Cobrador del Frac (quite literally, “The Debt Collector in Top Hat and Tails”), the company boasts an impressive 70% success rate, which they attribute directly to the fact all of their workers dress like idiots. While most people working for the company choose to dress in the company’s standard uniform of a tophat and tails, others enjoy hounding debtors dressed like clowns and matadors.

As honorable as they are ridiculous looking, the company refuses to accept contracts seeking payments from, as they put it, “cash-strapped individuals,” instead preferring to use their power to shame and embarrass established professionals and businesses with the money to pay their debts but believe their wealth should allow them to skirt the law. El Cobrador del Frac are so well-known in Spain that debt collectors usually don’t have to say anything to get debtors to pay up, with most preferring to simply follow their target silently every day until they get so annoyed about having Dracula or Superman follow them they pay up out of sheer embarrassment.

Owning a dog is a big responsibility, and along with ensuring that your furry friend is kept fed, healthy, and receives regular belly rubs, you are generally expected to also clean up their poop. It’s not pretty, but it has to be done, and most responsible dog owners know it’s a small price to pay to enjoy the company of a creature that adores you unconditionally.

After noticing that one too many dog owners were ignoring this smelly, but integral aspect of dog ownership, Camden council in London enacted a scheme to have every piece of dog poop found in a public parks sprayed bright pink. Almost overnight, instances of dog-fouling throughout Camden dropped by upwards of 50%, whereas in other English towns and cities local councils reported that similar schemes saw as much as a 75% reduction in the amount of poop being found in public parks. Officials would later theorize that the low-cost poo patrols seemed to work so well because dog owners seeing the patches of pink-tinged poop felt ashamed to add to the problem and, as a result, cleaned up after their damn dogs who, we should clarify, are all very good boys who are in no way at fault. Keen to present itself in a positive light on the world stage, China has a rather harsh and draconian policy when it comes to Chinese tourists. Simply put, if a Chinese national does anything to embarrass the country as a tourist in a foreign nation, they are publicly named and shamed throughout China and put on a big list maintained by the Chinese tourism authority that prevents them from leaving the country until they learn to not be a be a big ol’ swaggering wang.

The scheme was introduced a few years after the country enacted a so-called “tourism law” broadly designed to punish Chinese citizens who ignore or otherwise disrespect local customs and laws while traveling abroad. Since we’re talking about China here, the public was of course made aware of this law via a series of commercials depicting “bad” pandas urinating in public. The Chinese tourism authority also encouraged Chinese citizens abroad who witnessed unruly behavior from their countrymen to report them to facilitate their shaming process, meaning China officially encourages shame snitching!

2. The Tuba of Justice

In 2015 a legendary hero named Matt Buck heard about something that made his blood boil: that the freaking KKK were marching through Columbia, South Carolina. Morally offended that a bunch of societal crotch stains were able to walk through his town without being mocked, Buck grabbed his old sousaphone and drove to their location intent on remedying that.

Upon spotting the telltale awkward gait of an overweight racist, Buck began following the rally slowly playing an old marching bassline he recalled from his time in college. The bassline, it should be noted, is mostly famous today as that song Stewie from Family Guy plays while following fat guys around. After noticing he’d started to get under the KKK’s skin, Buck mixed it up and began playing a mournful rendition of “Ride of the Valkyries,” a nod to The Blues Brothers, in which the song is used to mock a bunch of Nazis. Although his counterprotest lasted only a few minutes, Buck was rightly called an American hero by every news website in the world that covered his march.

Artists like Banksy have shown us that art is a powerful tool that, in the right hands, can turn a mirror to society and force us to confront uncomfortable truths we’d otherwise like to ignore. Which is all well and good, but what about if you’re an artist who wants to confront a more innocuous problem like, say, potholes?

Well, you could always do what one anonymous artist from the UK did and fix the problem not with biting, satirical murals but crudely drawn penises. Known only as Wanksy, the artist’s only stated goal is quite simply to draw massive penises around every pothole in the country to shame or embarass local councils into fixing the problem. Although local councils struck by Wanksy categorically deny that the large penises mysteriously appearing all over their roads had anything to do with their sudden decision to fix them at that exact moment, the artist remains unconvinced and is confident that they will eventually be able to fill every pothole in the United Kingdom. As of 2018 that goal is apparently still ongoing, and if you’re at all curious about where Wanksy has struck recently, you can follow his (or her) adventures via Facebook.