The side hustle has become all too commonplace these days, with many people needing to secure a second income stream just to get by. Even people you’d think are pretty secure with their earnings, like these well known celebrities, have taken up side gigs.

10. John Malkovich Has His Own Clothing Line

John Malkovich is hands down one of the most popular and well-respected character actors of all time. If you need proof, look no further than Being John Malkovich. How many other actors get a movie made about a gateway into that actor’s brain that lets other people become him for a short period of time? He’s been acting since the 1970s and has received or been nominated for dozens of awards. So how does a guy like this spend his down time? Fashion design.

Back in school, Malkovich did costume design for productions, so he’s always had a passion for creating fashion. He now has a full line of men’s wear that he designs himself, including coats and jackets, knitwear, pants, scarves, shirts and ties. Unlike some celebrity fashion lines in which the celebrity lends their name to the line and maybe approves designs they like, Malkovich designs all of these himself.

Lest you think the Malkovich line is something that is maybe too niche or destined to fail, it’s worth knowing that he started his first line in 2002 so he’s been running strong for two decades now and continues to be well-received in the industry.. The British monarchy, as a business, is worth $28 billion. The Queen herself has personal assets worth $500 million. She probably doesn’t need a side hustle and could comfortably spend the rest of her days throwing balls for her corgis. But the Queen is a go-getter, and that means she’s always cooking up new schemes. Like her ketchup business.

Word is the Queen has a real love for hamburgers because you can’t rule an empire without some grilled beef now and then. Inspired by this love, she rolled out a line of condiments in 2022 featuring both ketchup and brown sauce, which North Americans would recognize as steak sauce. Both kinds are made from ingredients grown on the Queen’s Sandringham estate.

The ketchup is made with dates and apple juice because, sure, why not? It also costs $9 for a 10 oz bottle. Whether or not the sauces will make it to international fans remains to be seen since the product line isn’t available just yet. In the meantime, there’s still the Queen’s gin, made from ingredients sourced from the Buckingham Palace Gardens. 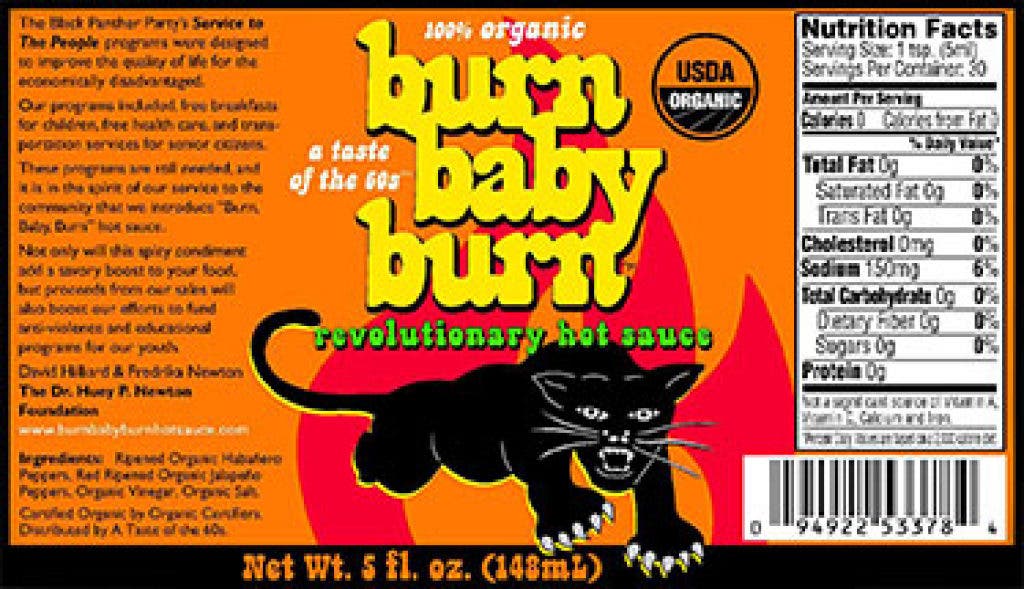 Marvel’s Black Panther proved to be a cultural phenomenon when it came out and is still one of their most popular films. Because of its international success, people sometimes forget or are unaware that it’s not the only black panther in the world. Not only are there actual giant cats that are black panthers, there’s also a political organization that was officially called the Black Panther Party. Between the 1960s and 1980s, they were prominent on the American political scene. Their history is a storied one that includes a lot of good work as well as a lot of violence.

While the politics of the party can be debated, they were still an organization that needed funds to run. That’s where “Burn Baby Burn” comes in, the hot sauce created to raise funds for the Huey P. Newton Foundation. Other members of the Black Panthers were behind the sauce as a way to both honor Newton’s legacy and bring attention to things the Panthers stood for, not to mention their history. It was cooked up by the foundation’s executive director and former Panther David Hilliard along with singer Al Green.

Sadly, reviews for the sauce were less than stellar, ranking it as an average and forgettable condiment.

KISS bassist and most outspoken member Gene Simmons has had a long, weird path from stardom in the 70s to today. He’s had a reality show and more than his fair share of controversial runs in the press, but one thing he’s always been known for and fairly proud of is that he will do just about anything for money. The man markets anything and everything he can. He sold air guitar strings. As in empty bags, for $3.99 a pop.

Arguably the most bizarre of all the merchandise that Simmons had signed off on is the Kiss Kasket. It’s a coffin, and it’s entirely real. Partnered with Nashville Casket Sales, the Kiss Kasket uses a car wrap to give the 20 gauge steel box the full KISS aesthetic on the outside while offering up some plush velvet inside.

If you think this is just a joke, you should know both Vinnie Paul and his brother Dimebag Darrell from the band Pantera were buried in KISS Kaskets.

Dan Aykroyd rose to fame on Saturday Night Live and then cemented his place in pop culture with films like The Blues Brothers and Ghostbusters. Nearly four decades later, he’s still showing up in the Ghostbusters universe, but he also has a lot of work on the side to keep him busy.

Back in 2008, Aykroyd got into the celebrity booze game with Crystal Head Vodka. Long before people like George Clooney, the Rock or Ryan Reynolds were trying to get fans wasted, Aykroyd was putting vodka in bottles shaped like crystal skulls. The bottles were a huge draw and have kept the brand going strong for over ten years, even after his home province of Ontario banned them for a while because the imagery of skulls and alcohol was apparently too grim. They lifted the ban after a year.

Aykroyd also produces his own wine with the Lakeview Wine Company and is part owner of several wineries producing numerous varieties. His ice wine was named Canadian Wine of the Year in 2005. He’s gone on to win numerous other awards as well. He also is involved in the company that imports Patron tequila for sale in Canada as well.  Basically, whenever he’s not fighting ghosts, he’s getting Canadians wasted. Styx became a pretty big act in the 80s with songs like “Come Sail Away” and “Mr. Roboto.” They’ve sold tens of millions of albums and have had a lasting impression on pop culture. So what keeps a band going long enough to do all of that? Coffee, apparently.

Frontman and guitar player Tommy Shaw makes his own brand of coffee called “Styx Special Brew.” He’s been producing it since 2011 when he teamed up with the Coffee Fool to produce his own brew for charity. The coffee is still on the market and ten ounces of it will set you back just under $14. You can also get Shaw’s “Great Divide” blend, which is 50% decaf. It’s also certified organic and fair trade. Plus, all profits go to the Rock to the Rescue charity, which Styx founded with REO Speedwagon to support grassroots organizations. For just over 30 years, Bill Wyman was the bass player for the Rolling Stones. He left the band in 1993 and pursued his own projects since then. But one of his pastimes branched into one of the most niche businesses a person can get into. Wyman has his own metal detector.

In his downtown, Wyman really enjoys using metal detectors and is an amateur archeologist. He designed the Bill Wyman Signature Metal Detector as a lightweight and affordable, yet still reliable tool. The idea was to be an easy-to-use introduction to the hobby for children or anyone else who hadn’t had a lot of experience with metal detecting in the past. Because, as Wyman said, “it’s probably the best and most enjoyable way to learn about our history.”

Wyman started selling the detectors back in 2007 and has his own collection of found treasures, including seals from the 17th century as well as Roman artifacts from his own estate ground.

The band Hanson rose to fame in 1997 with their song MMMBop. The three brothers became incredibly huge based on the single’s success but did not produce another hit and detailed their struggle to come up with a third album in the documentary Strong Enough to Break. While their music career was never the same, they kept performing and have remained fairly popular. Also, the brothers did go on to many other projects, including Hanson Brothers Beer, which produces a handful of different brews, including Tulsa Tea stout and Mmmhops. Yes, the brothers who were all children at the peak of their fame are not only adults, but they have children of their own now and are all more than old enough to both drink and brew beer.

Reviews of the beer are not super encouraging, but they’re not bad, either. Mmmhops is a very standard IPA, it seems. It’s better than bad and that’s something. As an upside, if you’re a fan of the band, buying Hanson beer also gives you a QR code on every bottle that you can scan for a free Hanson music download. So you’ll have something to listen to while you drink, if you want. If there’s one thing people on the internet love to debate, it’s who was the best Batman on screen. We have about seven of them to choose from in terms of live action, official Batmen at this point, but for many people, no one is topping the original icon Adam West. Back in the 1960s, West made Batman fun and weird and miles away from the grim and dark Batmen that Christian Bale and Ben Affleck provided.

Alongside West was his trusted sidekick Burt Ward, who played Robin, and he’s pretty much the archetype for the character since we only got one other paltry on-screen Robin. While we lost Adam West in 2017, Burt Ward has been keeping himself busy doing things like making his own brand of perplexing dog food.

Gentle Giants food is targeted to large breed dogs and there are some unofficial claims that dogs that eat the brand live remarkably long lives. As in close to 30 years. Whether that’s true is up for debate, but the food itself does seem to be high quality and nutritious for dogs, so it’s a solid product. The formula is attributed to Ward and his wife, but their packaging is an absolute madhouse of confusion as every square inch is covered in text and photos that make them look like the back pages of old comic books from the ’60s and ’70s covered in dozens of ads. Like Gene Simmons, Snoop Dogg is a man who knows how to market. Aside from being a legendary rapper, Snoop has managed to market his own brand of pot, wine, gin, NFTs, cookbooks and more. But when it comes to really hitting the nail on the head in terms of marketing perfection, nothing seems to be more appropriate than Snoop Doggs, Snoop’s foray into hot dogs.

Early in 2022, Snoop filed a trademark over the name “Snoop Doggs.” It won’t be the first time Snoop has dipped his toe in hot dog waters either as he paired with Canada’s Skip the Dishes delivery service to set up a free hot dog truck in Toronto during Superbowl weekend.

Snoop has invested in meat-free products in the recent past as well, so it’s possible when his company launches they’ll be vegan dogs, but time will tell.