Dictator. We have very negative connotations of the word. It brings to mind oppressive regimes, the suffering of the masses, the power of one over all. But there’s nothing inherently wrong with dictatorships – in fact many will suggest that the best political system, for everyone, is a dictatorship. That is if, of course, the dictator is benevolent; kind, caring, and working for the good of the people.

Peisistratos was the original benevolent dictator. His rule lasted from 561 to 527 BCE, seizing power in Athens three times. The first time, he was accepted as tyrant (dictator) of Athens by popular vote of the Athenian assembly, but his enemies soon gained enough support to have him exiled. The second time he marched into Athens with a tall, beautiful woman from outside of the city, claiming that she was the goddess Athena herself, and the people of Athens welcomed him as their ruler. He was once again ousted however, and during his ten year exile raised a private army and returned once more to Athens, and with great support from within the city began his third and final rule.

During all of his rules Peisistratos was a popular and well liked ruler. He worked for the people – he offered land and loans to the needy, for example. He created a time of peace and prosperity for Athens. Upon his death however, Peisistratos’ sons Hippias and Hipparchus took over. For a while they maintained popular support, but after Hipparchus was assassinated, Hippias began to rule much more harshly, and lost the support of the people. In the end Hippias was exiled by the Spartans, who had been convinced to come and liberate Athens.

Ashoka the Great lived from 304 to 231 BCE, and ruled the Indian Mauryan Empire, the largest ever in the Indian subcontinent and one of the world’s largest empires at the time. When Ashoka first gained power, he ruled as his predecessor had. He was cruel and efficient – he used the might of his military to control and expand his empire, and he even built a prison aptly called ‘Ashoka’s Hell,’ where all prisoners where subject to horrific tortures, and no prisoner was to leave alive.

During the expansion of his empire, Ashoka led a war against a nearby state called Kalinga, with the goal of taking its land to add to his Empire. The war led to an estimated 300,000 casualties – not very benevolent sounding so far, we admit. But after this war, Ashoka publicly expressed his regret for the suffering he inflicted, renounced war, and there is some evidence to suggest he converted to Buddhism. He issued proclamations declaring that his officials should help the poor and elderly, he established medical facilities, and began public works projects, such as planting trees for shade along roads.

Marcus Aurelius Antoninus, was born in Rome in 121 CE. He rose to power in 161 CE, and is recognized as the last good emperor of Rome (you’re likely familiar with him, or at least a fictionalized version of him, from the movie Gladiator). Marcus ruled alongside his half-brother Lucius Aurelius Verus, until Lucius’ death in 169 CE. After Lucius’ death, Marcus ruled alone until 177 CE. Marcus attempted to rule justly, according to the philosophy of stoicism which he followed, but he faced many troubles during his rule, including incessant war with the beginnings of what was then a fanatic religious sect known as Christians.

Marcus’ prosecution of early Christians may seem harsh today, but were regarded by the emperor as necessary to keeping the peace within Rome – which indeed it probably was. Despite this, Marcus is regarded as being a good ruler, due to his ability to put the needs of the people of Rome before his own aspirations of glory, something most emperors failed to do.

Khosrow was a Persian king, who ruled the Sasanian Empire from 531 to 579 CE. Little more than legends exist of his early life, but what we do know is that once Khosrow rose to power, he began reforming the declining empire. His most important reform was his tax reform, which created a system that was both fairer and yielded higher gains for the empire, creating a more stable economy.

Khosrow was also a patron of culture – astronomy flourished in his court, and when the ancient academy of Athens closed, several Greek philosophers migrated to the Sasanian Empire and were well received by Khosrow.

Frederick II was the third kind of Prussia, and is credited with making Prussia one of the Europe’s great states of the time. He was crucial in spreading and strengthening the ideas of enlightened government, the age of reason. He was religiously tolerant, and believed in the importance of the state over personal or dynastic interests.

Frederick revamped and standardized Prussia’s justice system, including banning torture. He liberalized control of the press, and he rejuvenated the scientific work of the Berlin academy. He encouraged trade by building canals and enacting protective tariffs, and he lowered internal duties, all as part of his work to strengthen Prussia’s economy.

Simón Bolívar was a liberator, perhaps most famously of his homeland, Venezuela. It was not Venezuela where he became dictator, however – it was Peru.

Bolívar launched several campaigns to liberate Venezuela from Spanish royalist control, and on his third attempt he was successful. He continued to work against the royalists in South America, leading to his control of Peru.

Bolívar’s political ideology was strongly authoritarian – he believed that a country required a strong government (or a dictator) to become the best it could become.

Bolívar earns a spot on this list more for his vision than his achievements. He envisioned, and made some headway towards creating, a uniting of the Hispanic American states. He helped draft and have signed treaties between Colombia, Peru, Mexico, and the United Provinces of Central America, with plans for a common army and navy, among other things. Only Colombia was ultimately good for its word, however.

Mustafa Kemal Ataturk started his military career as the commander of the 19th division in the Ottoman army. There he made a name for himself defending the Dardanelles against the Allied invasion in 1915, and received repeated promotions.

When the Armistice of Mudros ended the fighting in the Ottoman Empire, the treaty gave the Allies the right to occupy forts that controlled major waterways, and any other territory that might pose a threat to security. Mustafa wasn’t especially happy about this, and organized a resistance. When the treaty of Sèvres was signed at the end of World War One, dividing up the Ottoman Empire, he demanded full independence for Turkey. The new Turkish parliament had to fight for its independence against Greek and Armenian forces until October 29, 1923, when Mustafa signed the treaty of Lausanne. This established the Republic of Turkey, with Mustafa as the country’s first president.

While technically a president, Mustafa’s level of control gives him the status of a dictator, in retrospect. His first moves as president were to modernize and secularize the country, with a constitution that separated government from religion. He emancipated women, and industrialized the nation, establishing a railway network and state owned factories.

Some of his policies were not well liked, particularly state secularism, but for the most part he liberated a people, and advanced his nation. 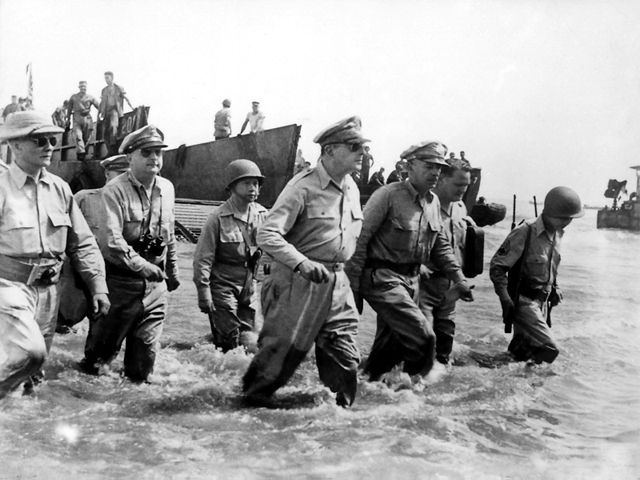 Douglas MacArthur wasn’t a “dictator” as we generally interpret the word. He never ruled a country, after all. However, he was given control as the Supreme Commander of Allied Powers (SCAP), and maintained total authority over the forces occupying post-WW2 Japan. Although several countries had advisory roles, MacArthur was given final say on all decisions, giving him, effectively, total control. And when you’ve got full control over a nation, we think that more or less defines “dictator.” After all, his actual title was Supreme Commander, for goodness sake.

During the occupation under MacArthur, his SCAP forces introduced a number of reforms, including removing political power from the Emperor and placing more power in the parliamentary system, and promoting greater rights for women. It also stabilized the Japanese economy, introduced a land reform that benefited the majority of farmers and reduced the power of rich landowners. These reforms helped create a very strong economy for Japan, and ultimately that’s what MacArthur did during the occupation of Japan – their economy had suffered during the war, and under MacArthur, the SCAP forces rebuilt it.

The reason Khama makes the list as a dictator is because, due to great popular support, he was president of Botswana until his death. He had tremendous support from the rest of Botswana’s Government, giving him a large degree of power, and would almost certainly have continued ruling the nation for as long as he may have lived.

Khama was the one who pushed for independence of Bechuanaland, which became the Republic of Botswana. The country achieved independence in 1966, and Khama became its first president.

Before assuming the throne in Jordan, Abdullah was commander of the Jordan Special Forces. Abdullah was not originally in line to ascend the throne, but in 1999 King Hussein, whose health was declining, named Abdullah the new heir, as the current heir was considered too young to rule. This decision was met with criticism from many, who thought Abdullah was unsuitable for this position of responsibility. Upon assuming his position, however, Abdullah showed his ability to handle the position of power.

Abdullah oversaw the upgrading of Jordan’s armed forces, which allowed Jordan to avoid the violence that plagued its neighbors.

Not all people in power are quite so warm and cuddly.
Check out 10 Dictatorships Deadlier (and Crazier) than North Korea and the Top 10 Brutal Dictators You’ve Never Heard Of.
Other Articles you Might Like
Liked it? Take a second to support Toptenz.net on Patreon!