Our species, Homo sapiens, have only been around for about as long as a blink of an eye in terms of Earth’s history. It’s believed that the Earth formed over 4.6 billion years ago, and the first humans evolved about 200,000 years ago in Africa.

In order to survive so that modern humans could flourish, our prehistoric ancestors had to fight off and hunt animals that were much bigger and far stronger than them. These are 10 horrifying animals that they may have encountered as humans migrated all over the world. 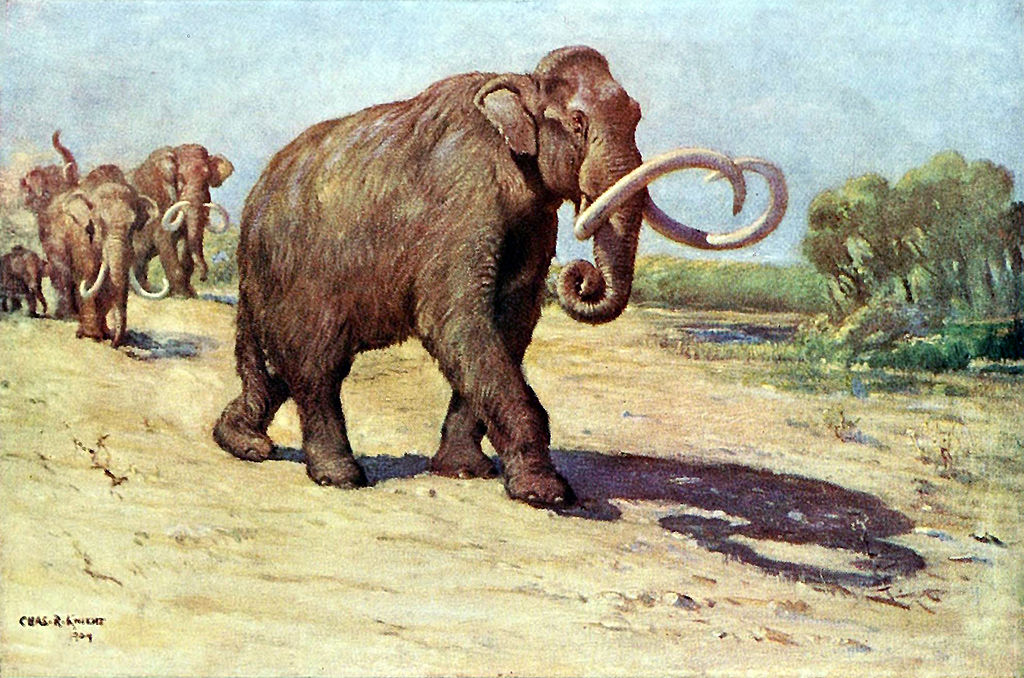 Columbian mammoths were 12 to 14 feet tall and weighed anywhere between 5.5 and 11 tons. The Columbian mammoth also had the biggest tusks out of the elephant family. They were, on average, 12 feet long, spiraled, and very strong. They would have been used to fight off predators, including humans. We know that this list is about terrifying animals, and sloths are anything but terrifying. However, their ancient ancestors, ground sloths, were a bit more intimidating than their modern day counterpart because they were some of the biggest mammals to ever live.

There were several different subspecies of ground sloths and the ones that lived in North America were the size of rhinos and humans most likely dined on them. However, the biggest ground sloths, the Megatherium, which lived in South America up until about 10,000 years ago, were as big as an elephant. From head to tail, they were 20 feet long and weighed up to four tons. Also, because they had sharp teeth and long claws, there is some speculation that they may have been carnivores.

Ultimately, the last species of ground sloths lived until about 4,200 years ago on the Caribbean islands. When humans arrived on the islands, it was the final death blow to the ground sloths. The biggest known primate to ever walk the earth was the Gigantopithecus, which is a relative of orangutans. They were 10 feet tall, and they weighed around 1,100 pounds.

One thing you may notice is that the Gigantopithecus looks a lot like the mythical Sasquatch. However, before anyone begins to speculate, the Gigantopithecus died out 100,000 years ago. So unless a group of 10-foot, half ton apes actively hid themselves from humans for one thousand centuries, it doesn’t seem likely that people have seen Gigantopithecus and thought it was Bigfoot.

The reason they died out after living on Earth for six to nine million years is because they needed a lot of food, like fruits, to sustain their giant bodies, which wasn’t a problem when their home in Southeast Asia was tropical forests. But then, because of weather changes their forests started to disappear and they became dry savannas, meaning there was less food and the giant primate just died out.

Of course, Gigantopithecus may be familiar to those people who saw the very excellent live adaptation of The Jungle Book, because King Louie is a Gigantopithecus. 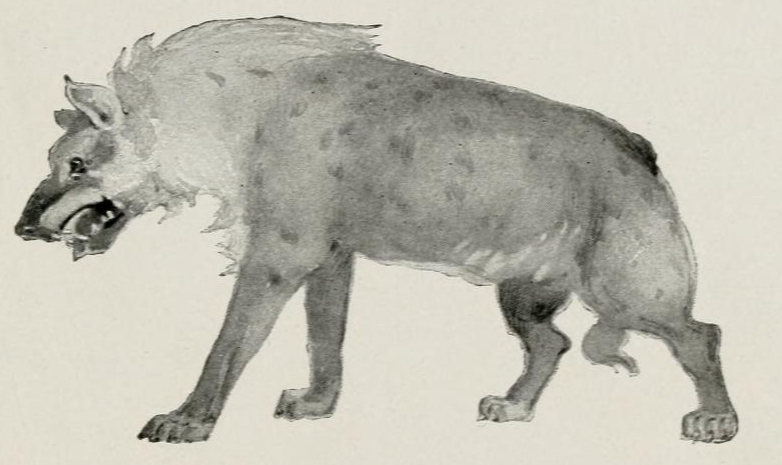 Cave Hyenas, also known as spotted coyotes, were about double the size of their relatives, the laughing coyote. They weighed up to 285 pounds, they were about three feet tall, and were nearly five feet long. According to calculations based on fossils, one cave hyena was strong enough to take down a 5-year-old mastodon that weighed a ton.

However, they lived in packs, sometimes consisting of 30 coyotes. These made them much more effective hunters, and they could take down a nine-year-old mastodon that weighed nine tons. Needless to say, a small family of humans would not want to come across a pack of hungry hyenas.

Their population started to dwindle about 20,000 years ago, before going extinct somewhere between 11,000 and 13,000 years ago. One reason may have been humans, because we competed with hyenas for cave space during the last ice age. 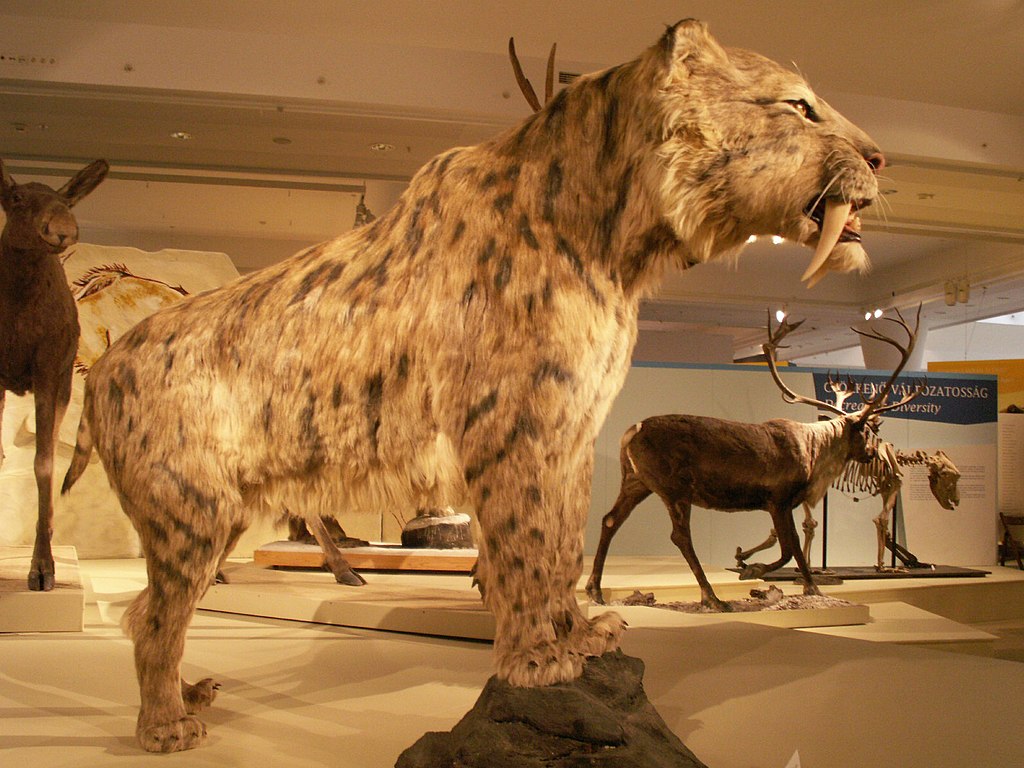 Saber-toothed cats are often given the very misleading title of saber-tooth tigers. It’s misleading because while they are part of the Felidae family, they weren’t closely related to tigers.

Saber-toothed cats first appeared 42 million years ago. There were many species of them and most of them had died before humans first appeared. However, it’s believed that humans living in the Americas could have come across two different species of saber-toothed cats, Smilodon fatalis and Smilodon populator. They ranged in size and they could be as big as an African lion, which is the biggest wild lion living today. They also could weigh as much as the biggest subspecies of tiger, the Siberian tiger.

With their size came great strength. The smilodons could take down much bigger animals than themselves, like mammoths. Often, they would wait for prey to get close and then launch a surprise attack.

Out of the feline family, the smilodon didn’t have the strongest bite. According to calculations, it only had about one-third of the bite strength of modern lions. However, it had a really flexible jaw and could open its mouth 120 degrees, compared to a lion, which maxes out at 60 degrees.

The smilodon also had fairly weak teeth, but researchers think to compensate for that, they developed the strongest forearms of all cats. It’s believed that they used this strength to hold down their prey and then stabbed their fangs through the prey’s neck. Another theory is that the Smilodon repeatedly stabbed the prey with their fangs after it was held down. No matter how they killed their prey, a human did not want to find itself under the forearms of a smilodon. 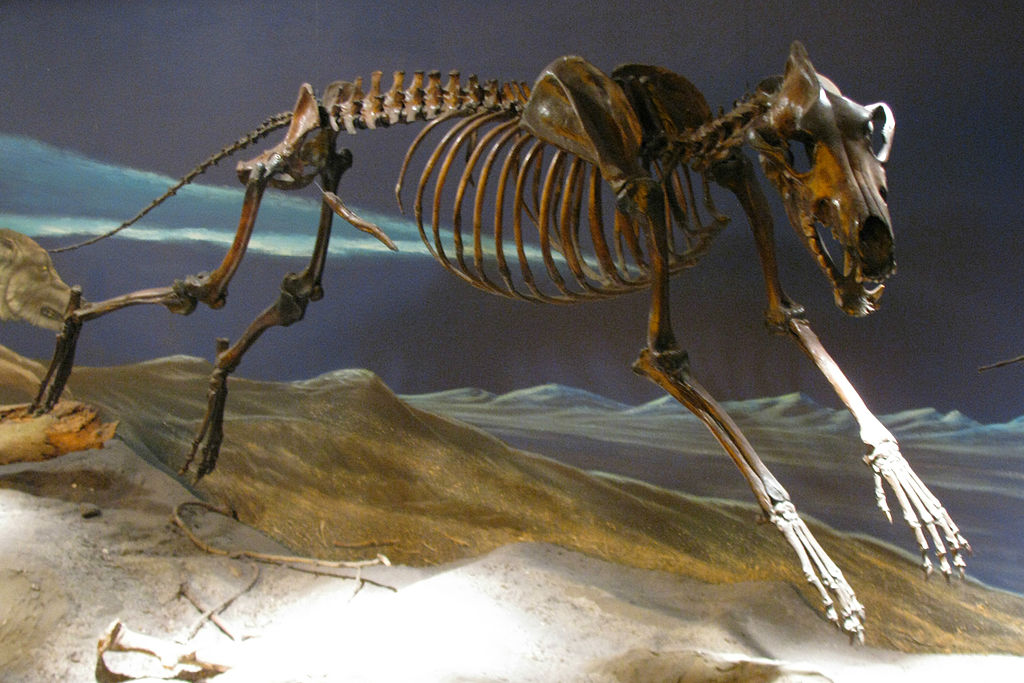 Fans of Game of Thrones may recognize Dire Wolves, but unlike many other animals on the show, Dire Wolves were real.

They first appeared about a quarter of a million years ago. They were similar to modern-day gray wolves but sturdier. The gray wolf, which is the largest living wolf, is about 4 feet to 6.6 feet long and weighs 40 to 170 pounds, while Dire Wolves were about 5 feet long and weighed up to 200 pounds.

Dire Wolves, which were found all over North and South America, had a bite force that was 29 percent stronger than gray wolves. Their diet consisted of mostly horses.

They became extinct like so a lot other carnivores, at the end of the last ice age about 10,000 years ago. 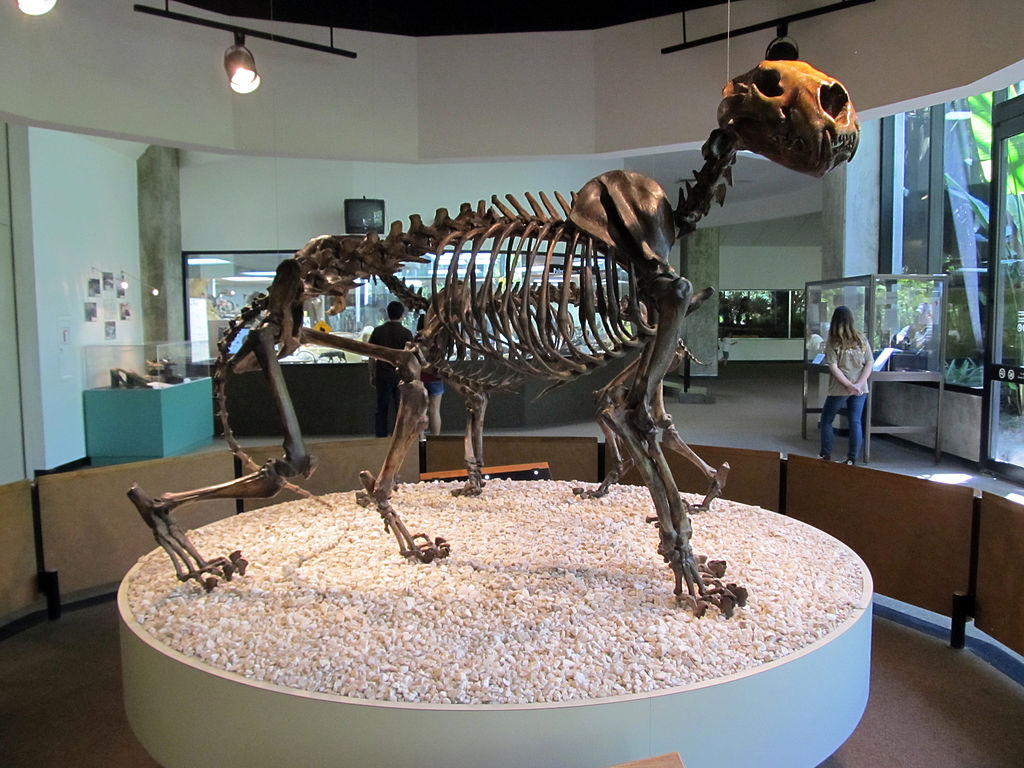 Like a lot of other animals on this list, the American Lion is horribly named because it’s not a lion at all. Its scientific name is Panthera atrox, and as it suggests, the American Lion is more closely related to panthers than lions. One part about their name that is correct is that they lived in modern-day America starting about 330,000 years ago.

One notable aspect that our ancient ancestors would have noticed right away if they encountered an American Lion is that it was huge. In fact, it is the biggest known wild cat in history. On average, they weighed 772 pounds, which is 25 percent larger than an African Lion. The American Lion was also incredibly strong. They were powerful enough to bring down a bison, meaning a small group of humans would have been in trouble had they encountered one of these lions.

They died around 11,000 years ago around the end of the last ice age. 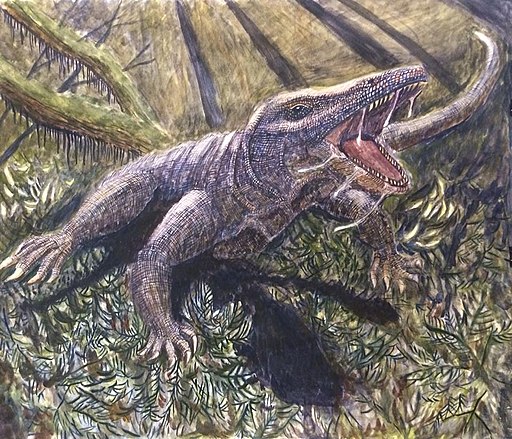 Megalania was a monitor lizard, which is the same lizard family as the Komodo dragon, and it lived in Australia until about 50,000 years ago; around the same time that humans migrated there.

The size of Megalania is a highly debated topic. Originally, it was thought to be 23 feet long, while other estimates put its size more in the range of 11 feet long.

Regardless, they were bigger than Komodo dragons, but like the Komodo dragon, the Megalania also had poisonous glands. It would simply bite its prey and if it didn’t die of blood loss, then it would be slowly poisoned to death and the Meaglania would feast on its carcass.

Today, Komodo dragons are considered a very dangerous animal. They are fast, strong, and poisonous. They are also on average 6.5 feet long. The Megalania could have been four times that size; not exactly something a human, either prehistoric or modern, would want to bump into. 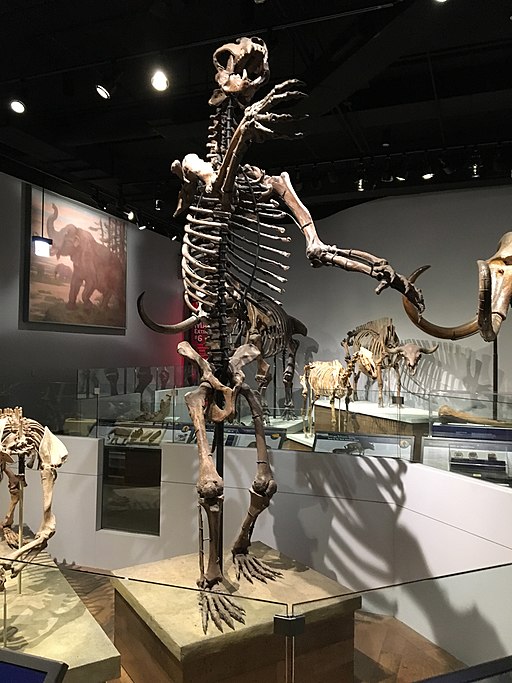 Bears first appeared about 40 million years ago, and several subspecies have evolved over the years. One that our prehistoric ancestors would have encountered is the short-faced bear.

Short-faced bears (Arctodus pristinus) were five feet tall at shoulder height, but when they stood up, they were 12 feet tall and with its arms raised it was 14 feet tall. It also had the ability to run on two legs. If that wasn’t terrifying enough, the short-faced bear also had long limbs, and could run faster than a grizzly, possibly reaching speeds of 40 miles per hour. That means even Usain Bolt, who was clocked in at 28 miles per hour, would be dinner for this beast.

The Giant Short-Faced Bear was one of the biggest carnivores in North America. They first appeared about 800,000 years ago and they became extinct about 11,600 years ago. 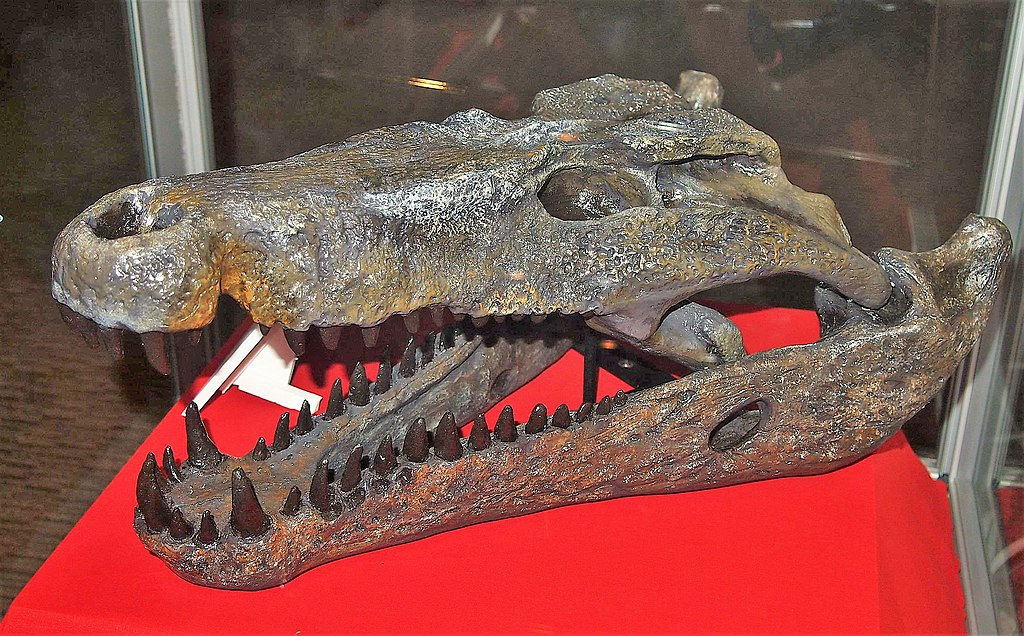 According to fossils, the Quinkana first evolved about 1.6 million years ago and they lived in modern day Australia. They were huge members of the crocodile family and they could grow to be 23 feet long. Just for some perspective, the longest crocodile in captivity was Lolong and he was 20 feet long.

A major difference between the Quinkana and many other crocodiles is that they were land dwellers. Since they lived on land, there was two major physical traits that the Quinkana developed. The first was that it had long, powerful legs. It would hunt its prey by chasing after them for long distances. The second difference is that crocodiles use their teeth to latch on and drag their prey into the water and drown it. The Quinkanas’ teeth, on the other hand, were much sharper and they were used for cutting.

They died out about 50,000 years ago, about 10,000 years after humans first arrived in Australia.