Frogs have been around for at least 250 million years. But in the past 35 years, they’ve been dying off in unprecedented numbers. Nearly one-third of the world’s amphibious species are threatened. In the past two decades, 168 species went extinct. There are a few main culprits like climate change, deadly fungus, loss of habitat, and invasive species.

You may be thinking, “So what? I can’t even remember the last time I saw a frog, why do I care?” Well, the reality is that the very real possibility that frogs and other amphibians could go extinct is very alarming to scientists. If all the frogs were to die off, that could be the signal that we are living out our lives on a doomed planet.

The earliest records of people eating frogs date back to China in the first century AD. The Aztecs also apparently dined on them. Then in the 12th century, frogs became a popular food among the monks in the monasteries in France. On certain days, the monks were only supposed to eat fish, and for some reason, frogs were considered fish. From there, they grew in popularity in France and are now eaten in many countries around the world. This includes China, Thailand, the United Kingdom, and the United States.

According to the United Nations, one billion tons of wild frogs are eaten by humans every year. The problem is that the population of frogs is already rapidly declining because of other factors like climate change and deadly fungus. So, eating a billion pounds of frog legs every year doesn’t exactly help with their numbers.

And in case you’re wondering, frog legs taste like fish or chicken. Essentially, they are pretty bland. It’s usually the sauce that makes it interesting.

A lot of us probably remember dissecting a frog in high school. Maybe just by reading that, it invoked the memory of that strong smell of formaldehyde.

Frogs have been a staple of biology classes around the world for decades. There are several reasons that many schools use frogs. The first is that their organs are organized in a way that resembles humans. Frogs are also great for teaching evolution and ecology because they show signs of it in their bodies. For example, their tongues have evolved to be long and powerful, which allows them to eat insects. This ability allowed the frogs to fill in a niche in their ecosystem, which they are now an integral part of. However, without frogs, this type of hands-on experience would no longer exist.

Science’s usage for frogs doesn’t end in high school classrooms. Frogs are considered invaluable for research and testing. Notably, the African clawed frog’s genome is not too different from humans. In fact, they share 1,700 sequences that are all associated with diseases in humans. This makes the African clawed frogs an ideal human disease models. Scientists use embryos of amphibians to test the effects of toxins, mutagens, and teratogens. They are also easy to raise, have large eggs, and the tadpoles are transparent. These types of conditions make them ideal for research. Over the past 20 years, frogs have become one of the most preferred animal test subjects.

Other species of frogs are also great for genetic and genomic research because they have short generation times. This allows researchers to test theories and then see what will happen generations later, which is not exactly something that is easily done in humans. This has allowed scientists to research some of the most devastating hereditary diseases like Alzheimer’s and ALS.

Frogs are so important to scientific research, that 11% of all Nobel Prize winning studies in Medicine and Physiology used frogs in their research. A world without frogs means that we would lose a valuable model to do research on.

The bodies of water where frogs give birth are delicate ecosystems and the right balance is needed for everything to survive. One thing that really upsets the balance in the water is when there’s too much algae. When there is, it can reduce or completely eliminate oxygen in the water. Without much, or any, oxygen in the water, the fish become very sick or die off. The water would also become toxic and bacteria will grow. The water will get so vile that anything or anyone that drinks or even comes in contact with it, or eats the fish and shellfish from it, might get sick or die.

Amphibian tadpoles are incredibly important when it comes to the amount of algae in a system because they eat it. That means without frogs, many bodies of water will develop algae blooms that will make the water become too toxic to drink or harvest for food.

6. The Food Chain That Revolves Around Frogs Would Crumble 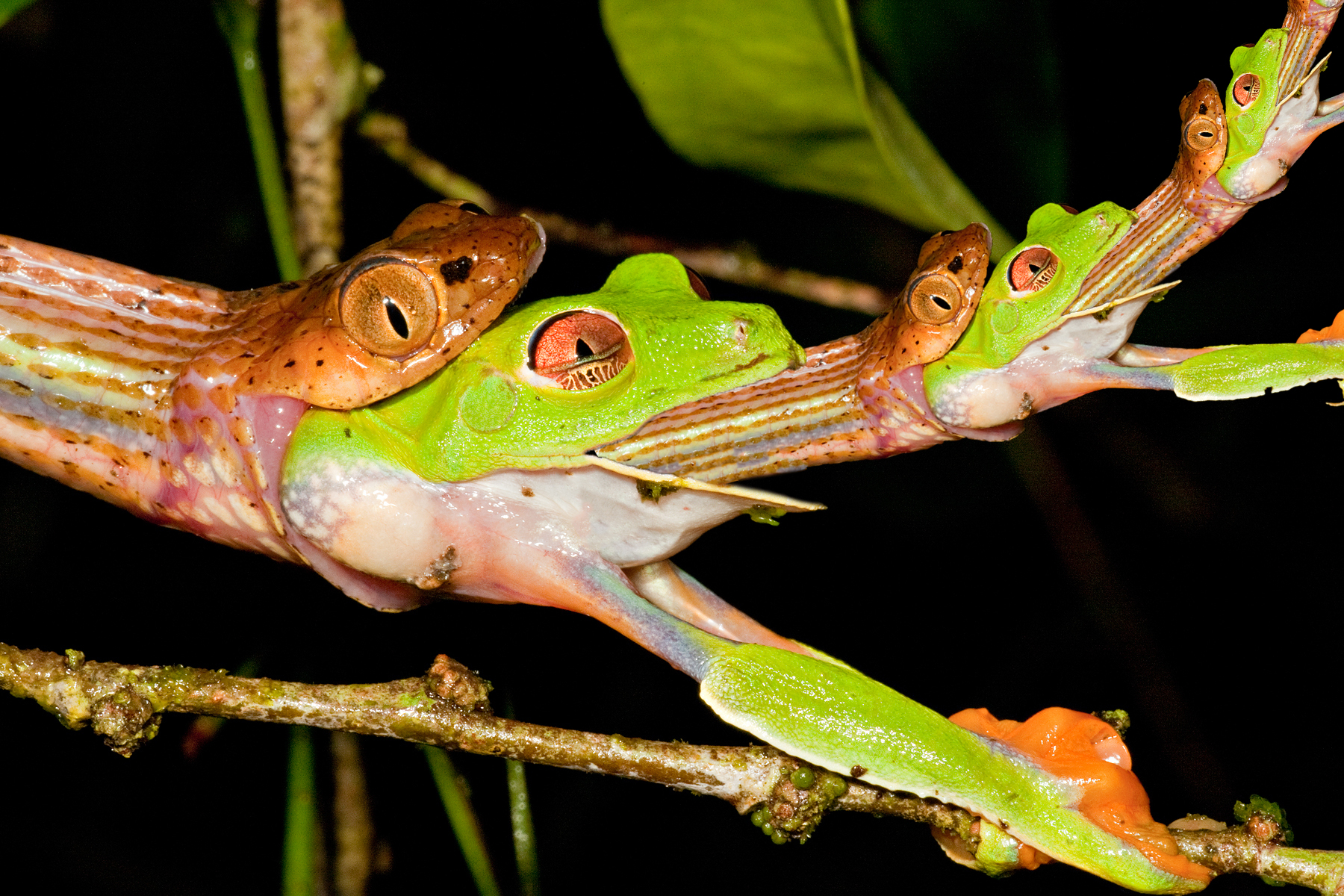 Frogs are an incredibly important and versatile member of their ecosystem at all stages of their lives. Frog eggs are eaten by wasps and spiders. In the next stage of their life as a tadpole, they are food for shrimp, fish, and dragonfly nymphs. As for full grown frogs, they are eaten by birds, monkeys, snakes, and lizards. So if all frogs were to die off, a valuable food source will go missing in the food chain of many animals around the world. Frogs are the most diverse species, and live on every continent, except Antarctica.

The death of frogs would send a ripple through the ecosystem. The number of animals that eat the frogs will die off, then the animals that eat them will go hungry, and their populations will be devastated as well. This would just keep going up the food chain. Essentially, the loss of the frogs could have deep, reverberating effects that we may not grasp until it’s too late.

5. There Will Be Way More Insects

For a lot of people, their dream home, or at least their dream vacation home, is waterfront property. That’s why waterfront real estate is so expensive. Well, those expensive places will lose a lot of their charm very quickly if all the frogs died off. The amount of bugs would be overwhelming. Frogs eat moths, flies, grasshoppers, crickets, mosquitos, and spiders. With frogs as a natural population control, insect infestations would become rampant if they were to die out. Not only would the insects be annoying, but they could wreak havoc on crops, which could lead to more chemicals and pesticides being used. And that’s probably one of the reasons frogs are dying off in the first place. Pesticides are also believed to be responsible for the large die-off of bees, another alarming environmental problem.

This lack of frogs and rise in insects already happened once in the 1980s in India. The population of frogs dropped significantly because they were shipping them off to France as food. This led to an increase in insect activity to the point where it was nearly unbearable. It got so bad that the government made it illegal to export frogs in 1987 because the cost of the pesticides needed to deal with the bugs exceeded what they were receiving for exporting the frogs.

Despite releasing carbon dioxide, the decomposition of plants and trees is important to forest life because insects eat it and it gives nutrients to other vegetation. However, it’s a delicate system. If there are too many insects, they eat too much of the decomposing plants and the vegetation doesn’t get the nutrients that it needs to survive. If there are too few insects, the forest will essentially suffocate in its own waste. That means more trees will die, leading to more decomposition, which will release more carbon dioxide. There will be fewer trees and plants to absorb it. All of this would lead to increased greenhouse gas levels, which isn’t something that the world needs more of.

The main factor that controls the bug population on the forest floor in many areas around the world is frogs and other amphibians. If frogs were to disappear, there would be an increase in bugs, meaning that not enough plants will get what they need to survive. Forests of all kinds around the world will rot and die.

Another, very serious way that humans will feel the sting of losing the frogs is that there will be outbreaks of sometimes deadly diseases. Without frogs, the mosquito populations will explode. Mosquitoes carry diseases including malaria, the Zika virus, West Nile virus, dengue fever, Lyme disease, Encephalitis, and leishmaniasis. While most of the diseases are not fatal or fatal all the time, a pandemic, or pandemics, will still put an incredible strain on society.

Healthcare systems around the world would be overwhelmed and that will increase mortality rates. The economy will also take a pounding because people will be more likely to miss work. Another way it will affect the economy is that a lot of people will be afraid to venture outside of buildings due to the out of control mosquito population. It will limit the amount of people who will go to outdoor events or venues. We could also see a shift of people moving from warm places that are rife with mosquitoes to colder places where there are fewer mosquitoes.

2. Frogs May Be Used to Treat and Cure Many Human Diseases

Not only are frogs incredibly valuable in research and testing, but they may be used to create cures and treatments that are derived from their own biology. Frogs and amphibians are very resilient and adaptable. One notable thing that some amphibians can do is regrow limbs. While humans are a long way from developing that type of technology, there is quite a bit of research going into how the protein-like chemical that increases rapid healing, called peptides, could be used on humans.

These proteins can be antifungal, antiparasitic, antibiotic, and antiviral. Peptides may also be revolutionary when it comes to the treatment of HIV, cancer, and many other deadly human diseases. However, without frogs, these breakthroughs may take longer to achieve, or we may never achieve them at all.

Ultimately, frogs are important to the world because they are essentially our “canary in the coal mine” when it comes to the environment. They are considered natural bioindicators, which is something that measures the health of the environment, for two different reasons. The first is because they live both on land and in the water so they experience land, water, and the air. The second is that they have skin that is porous and permeable, so air and water pass directly through their skin and isn’t filtered through their stomach. Like us, they like clean water and air, and they are sensitive to toxins and pollutants.

Now, here’s what is really scary about the whole disappearing frog scenario. As we mentioned before, frogs have been around for at least 250 million years, and amphibians evolved about 350 million years ago. That means that frogs have survived three mass extinctions, including the one that wiped out the dinosaurs. Yet, they can’t handle the current environmental problems and are now starting to die off in record numbers.

If all the frogs go extinct, well, bugs may be the least of our problems.