When most people think of the “Big One,” they often think about an earthquake caused by the San Andreas Fault. However, there’s actually a more dangerous fault called the Cascadia Subduction Zone. The Cascadia Subduction Zone, also known as the Cascadia Fault, is almost 700 miles long and stretches the west coast of North America from Vancouver Island to Northern California. For some perspective, an earthquake caused by the San Andreas Fault could reach 8.3 on the Richter scale, but a Cascadia earthquake will be more like a 9.2. That means that the quake could shake for up to four and a half minutes.

The odds of a mega earthquake happening in the next 50 years are about one-in-three. If it were to hit tomorrow, these are just 10 of the things that could happen.

Further complicating rescue missions and evacuations are aftershocks, which will continue for days afterwards. This will cause much more destruction and notably, it will be hard to pull survivors from unstable buildings because an aftershock could happen at any moment. This leads to more destruction, and more people buried under rubble.

As a result, the death toll will again rise, either from people attempting rescues, or simply because people can’t get to them. Aftershocks are also known for causing landslides, especially in areas with lots of hills. Hills, you probably realize, are found all over the west coast.

9. It Will Cause a Devastating Tsunami For North America’s West Coast

The earthquake will, of course, cause a ton of damage. Then, people along the west coast of northern California, Oregon, Washington, and British Columbia will have about 10 to 15 minutes to get to higher ground because a tsunami will be heading their way. Depending on where the wave makes landfall, it could be 20 to over 100 feet tall, carrying debris like boats and cars. Inland, the giant wave will be travelling at 12.5 miles per hour. That may not seem very fast, but a grown man is knocked over by ankle-deep water traveling at half that speed. Unfortunately, many people are going to have a hard time getting to high enough ground because a lot of the roadways in the earthquake zone area will be destroyed.

The good news is that only about 71,000 people live year round along the west coast where the tsunami will hit. However, some areas of the coast are popular tourist attractions. So while many people don’t live there year round, thousands of people work in the area, and even more visit during the summer months. This will make evacuations much more difficult. For example, when people live in an area where there’s some type of an inherent danger, they’re generally more prepared. However, it’s very doubtful tourists will be prepared. They may not even know how to drive out of town without their GPS, and this will only add more chaos to the already nightmarish scenario.

8. Japan, Indonesia, The South Pacific, and Hawaii Won’t Be Safe Either

Not only will the rupture cause problems in North America, but a giant tsunami will also be headed in the direction of Hawaii, Indonesia, the South Pacific, and Japan. Luckily, these places will get a warning because it will take the wave about 10 hours to travel there. However, the wave will still be over 10 feet tall, and millions will be displaced.

It’s believed that these countries will be affected because they already experienced it just over 300 years ago. In 2005, researchers found evidence that seven 12-foot waves hit the village of Miho, Japan, in 1700. Those waves were caused by a Cascadia earthquake. 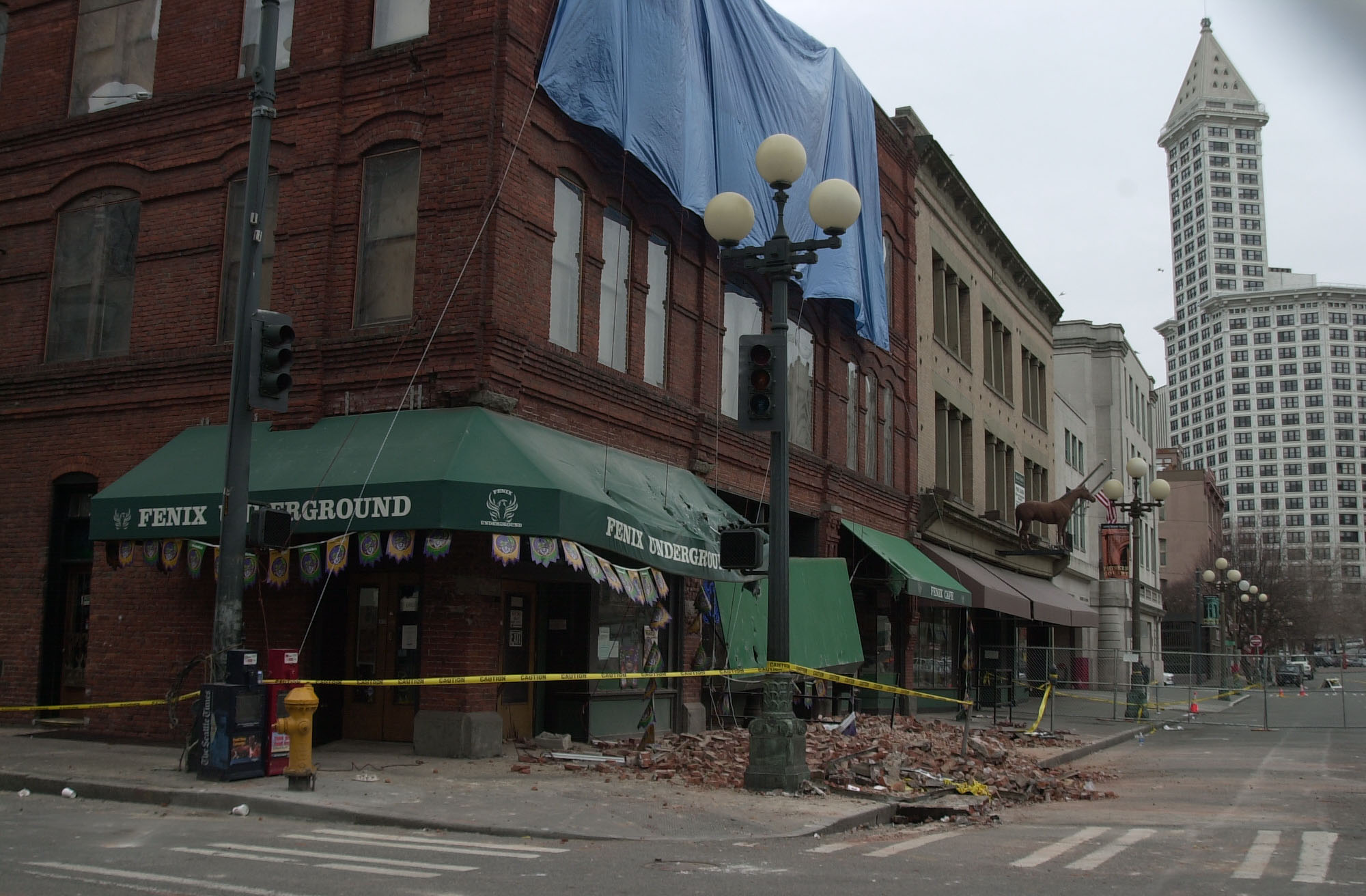 Seattle has a population of just over 686,000, and a lot of those people will be displaced if the Cascadia Fault ruptures.

When the earthquake starts, Seattle will be devastated by landslides; somewhere in the neighborhood of 30,000 of them. Another problem that Seattle will face is a phenomenon called soil liquefaction. The process happens when loosely packed and waterlogged sediments that are at, or near, the surface lose strength. It’s similar to standing in ankle deep water on a sandy beach. If you wiggle your toes while standing in the water in the sand, your foot will sink. Well, in Seattle, this will happen with soil that has buildings on top of it. That’s obviously not a good thing. In Seattle, about 15 percent of the structures are built on liquefiable soil. This includes 17 daycares and the homes of around 34,500 people.

6. Oregon Would Be Destroyed

One of the states that will be the hardest hit by a Cascadia earthquake is Oregon. The problem is that the Cascadia Fault wasn’t discovered until 1970. Oregon didn’t have any earthquake measures in place until 1974. As a result, the Oregon Department of Geology and Mineral Industries estimates that 75 percent of all the structures in Oregon would fail to withstand a Cascadia earthquake. This includes 3,000 schools, half the police departments, and two-thirds of the state’s hospitals.

Another problem with Oregon is that many of the cities are fairly isolated. There are also only a few roads in the entire state that lead east, away from the destruction. However, 38 percent of the state’s bridges will be out of commission, along with the railroads, and airport runways. Another problem is that all liquid gas is shipped in, so fuel shortages are very likely. This will all leave people stranded, making it incredibly difficult for search and rescue workers to reach them.

This could be even worse during the summer months when 50,000 people visit the beaches on Oregon’s coast. If the earthquake were to happen on a beautiful summer day, when the beaches are packed, it would be utter havoc. Another problem, which faces every state and city on this list, is if the earthquake happened at night. Then, all of these problems would have to be dealt with in the dark. 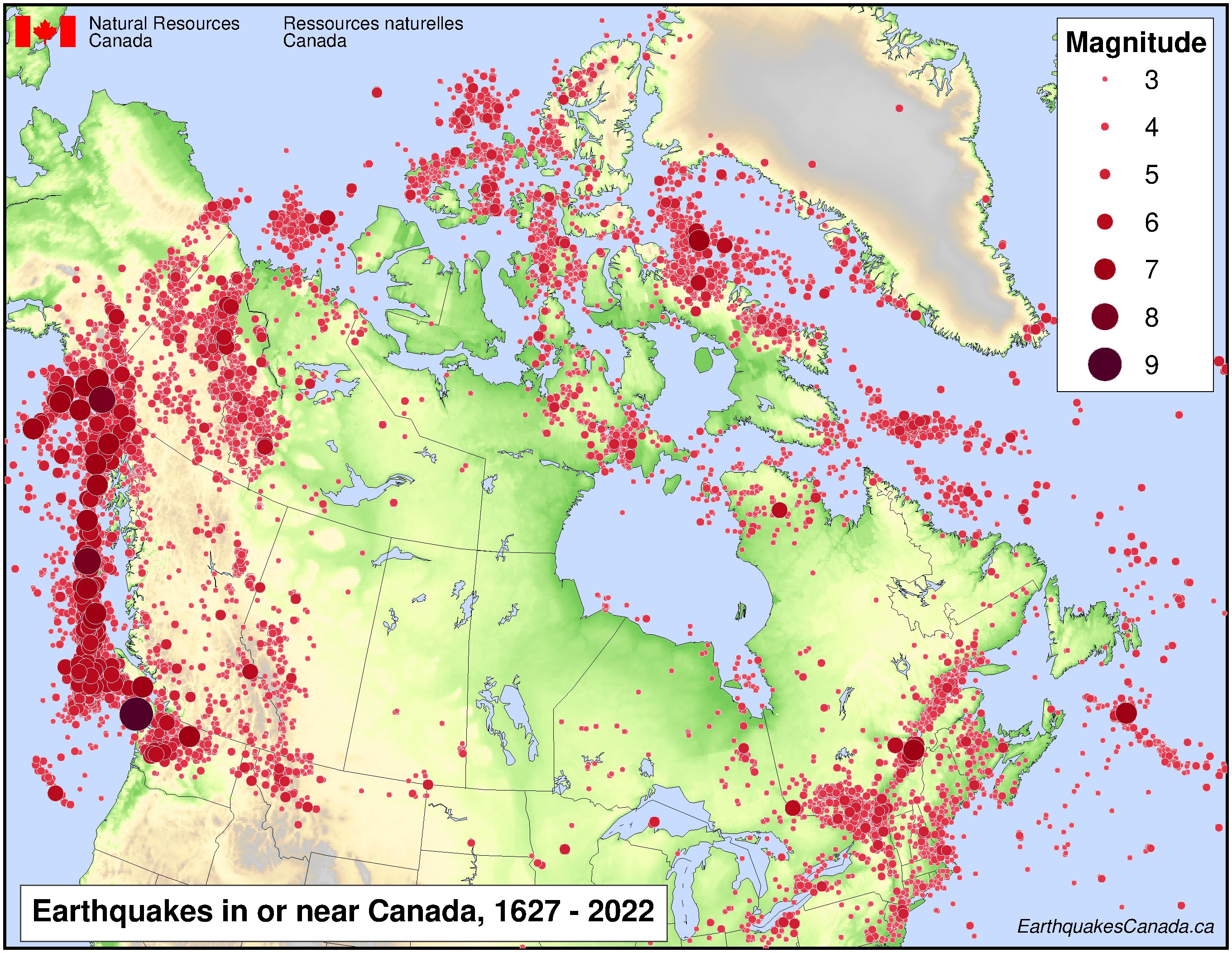 Canada will also be hit hard by a Cascadia earthquake. According to studies, it has the potential to be the worst natural disaster in Canadian history. Vancouver Island, which has a population of nearly 750,000, will have a lot of the problems that the other areas we’ve mentioned will face. Just like Seattle, buildings will collapse because of soil liquefaction. Like Oregon, the cities on the coast where the tsunami will hit are popular tourist areas. Also, one of Canada’s most beautiful cities, Victoria, which is the most populated city on the island with a population of 350,000, is in the extreme zone for the earthquake.

A problem with Vancouver Island is that it’s, well…an island. The airport is right in the extreme danger zone for the earthquake. And unfortunately, there’s no highway to this danger zone. (Sorry, we had to.) The most common way on or off the island are ferry systems, and those would have a two week disruption. This is going to make it incredibly difficult to get hundreds of thousands of people basic supplies like food, water, and medicine.

People in British Columbia are also unprepared. When last surveyed, about 70 percent of them didn’t have an emergency kit.

4. The San Andreas Fault May Rupture Around the Same Time 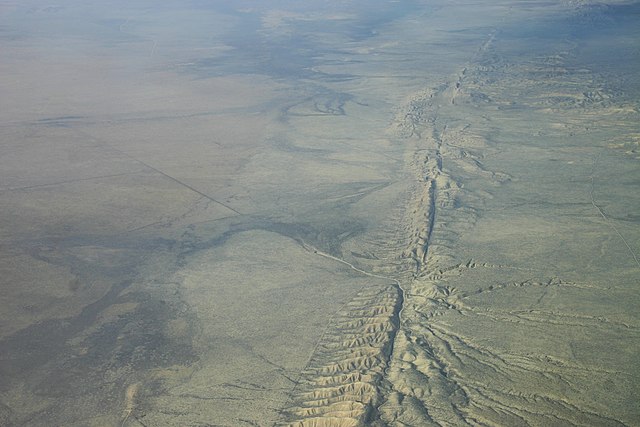 If the earthquake and the tsunami from the Cascadia rupture weren’t bad enough, there appears to be a link between the Cascadia Fault and the San Andreas Fault. The San Andreas Fault runs 800 miles through California. You may remember that it was the star of its own summer blockbuster. Or maybe you don’t, because the movie was so forgettable.

Researchers believe that there is a connection. It turns out, 13 out of the last 15 earthquakes caused by the San Andreas Fault were preceded by a Cascadia earthquake. While a San Andreas earthquake often happens years later, it’s also possible that it could happen within hours. For this reason, even if it didn’t happen immediately, Los Angeles, the second most populous metropolitan area and the city with the second highest gross domestic product in the US, would need to be evacuated because it isn’t exactly the most earthquake ready city in the country.

Notably, all of the electricity, gas, and water lines cross the San Andreas Fault. If an earthquake reaching an 8 on the Richter scale happened, Los Angeles wouldn’t have any gas, water, or hydro for months. Many of the modern buildings would survive, but older ones would be condemned as structurally unusable. It would take years, and billions of dollars, to restore Los Angeles to resemble a shadow of its former self. 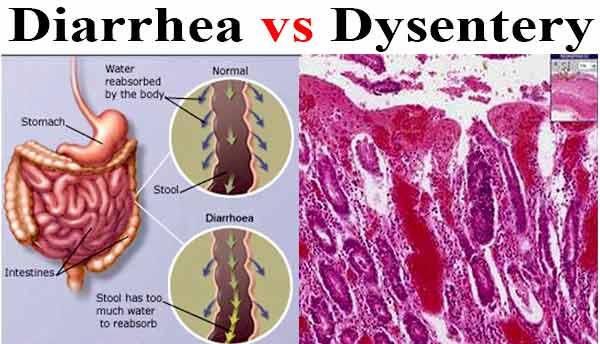 This type of disaster will be of unprecedented levels in North America. For example, 400,000 people were displaced by Katrina, but more than six times that amount will be displaced in the wake of a Cascadia earthquake and tsunami. The problem is, with this displacement and the inevitable disruption to essential services, there are often disease outbreaks and epidemics.

This happens because it’s hard to get access to clean water, overcrowding in shelters, and limited access to healthcare and medication. If the Cascadia earthquake happens before proper safety precautions are taken, there will probably be outbreaks of diseases like Salmonella, dysentery, and typhoid fever in the disaster areas.

2. The West Coast of North America Would Burn

When describing what the west coast would be like after a Cascadia earthquake, the director of FEMA in that area said that everything west of Interstate 5 will be “toast.” And yes, that is literally the term he used.

It may be toast because a major problem with earthquakes is that fires break out. In areas like Seattle and the state of Oregon, fire departments will also be in ruins. If they aren’t, many roads will be destroyed, making it difficult to travel to fires to put them out. If they get to the scene, if they have an earthquake resistant fire system, like Vancouver, and if it isn’t damaged, then they may be able to put out a few fires.

But it will still be very difficult to contain cities full of small fires. These small fires will turn into big fires, and the next thing you know whole blocks are gone. God forbid the fires spread to the forests and the brush that cover the west coast. Which, by the way, are already predisposed to forest fires. Things would be even more dire if an earthquake happens while forest fires were already raging, because resources would be depleted.

Things would only get worse if the San Andreas earthquake happened around the same time. In Los Angeles, hundreds of fires would start. But they wouldn’t have access to water to extinguish it, since the waterlines cross the San Andreas. 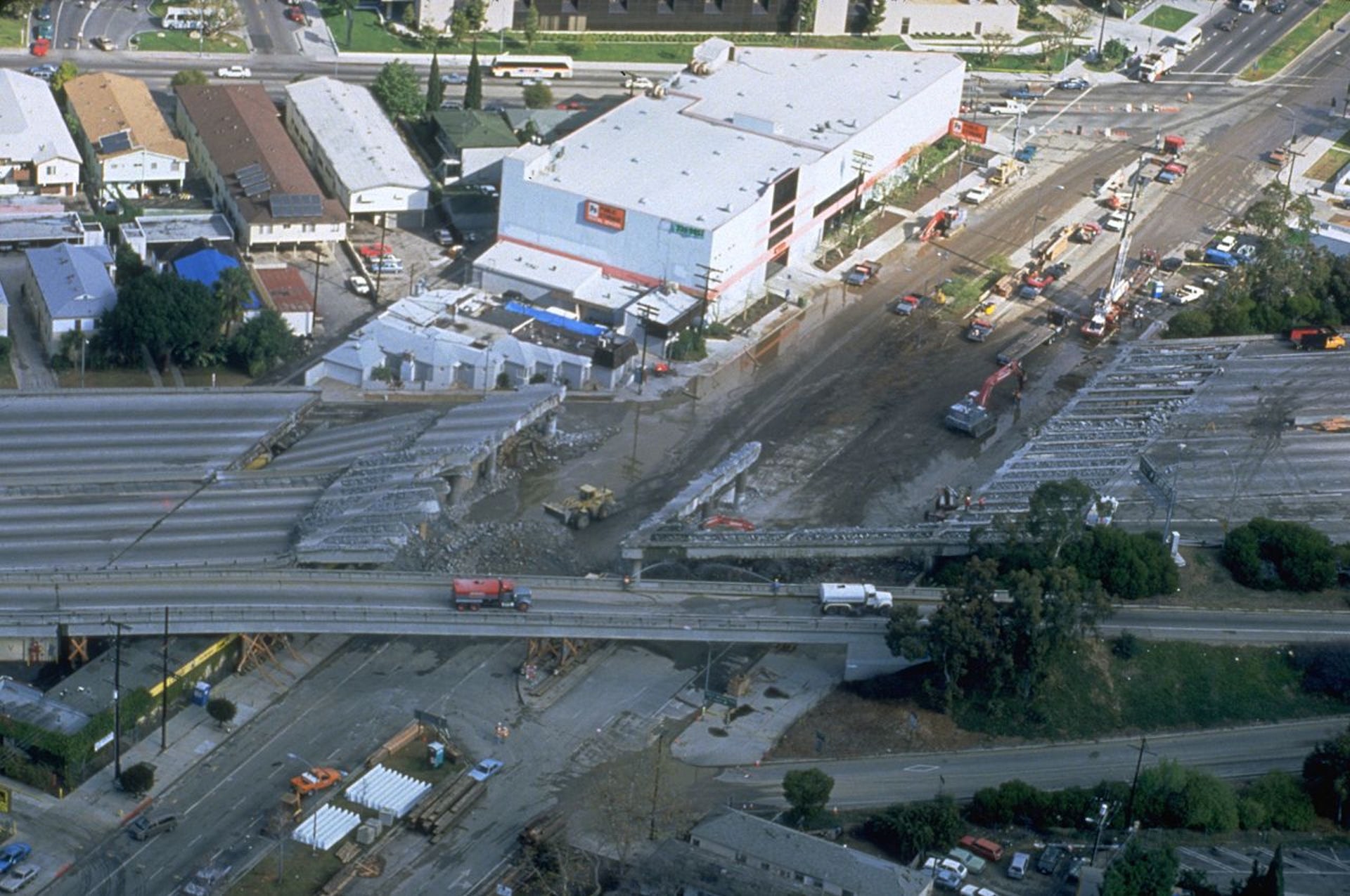 As you probably gathered, a Cascadia earthquake would be absolutely devastating to the west coast of North America. FEMA’s projections are rather alarming. In the United States alone, they estimate that 10,000 people will die, 30,000 will be injured, and 2.5 million people will be displaced. They’ll need water, food, medicine, healthcare, and shelter. Of course, if the San Andreas Fault was to rupture around the same time, thousands more will be injured and killed. Millions more will be displaced. Even if the San Andreas earthquake doesn’t happen, that area may have to be displaced until the cities are more earthquake proof. Following a Cascade earthquake, one is likely to happen soon thereafter. Hopefully, a San Andreas earthquake doesn’t happen until many years later.

As for damages, according to FEMA estimates, the earthquake and ensuing tsunami will cause $309 billion in damage. Every city within 100 miles of the coast will suffer blackouts. Inland, power will be restored within days. But it will take months to get hydro and natural gas back to areas near the coast. As for water systems, it’s estimated that it will take at least three weeks for restoration. It could take seven months, or even up to a year, to repair them. That’s a long time to live in an area without running water, gas, or electricity. Especially if you’re trying to rebuild a city.