By default, superheroes are the good guys. They’re wish fulfillment characters who exist to save the day and put the villains in prison (or Arkham Asylum) until the bad guys escape again and the circle starts anew. Sure, it’s not the ideal solution, but what can you do? It’s not like the superheroes can just kill their opponents.

Except, that is, when they do just that. There have been times when even the most goody-two-shoes superhero has had enough and straight up killed their dastardly supervillains. Here are some of the most shocking occasions.

10. Batman has actually killed a whole bunch of people Batman’s “no-kill rule” is one of the defining traits of the character. However, even if the reader manages to suspend the disbelief of a large martial artist in a battle suit ruthlessly punching criminals for years and never even accidentally killing one, the whole “Batman doesn’t kill” thing doesn’t quite hold water… because Batman has absolutely killed lots of villains, and had no trouble doing it with any means necessary. He even used guns, something he aggressively shies away from in most modern comics.

In his very first appearance in 1939, the Caped Crusader killed a bad guy by kicking him in a vat full of acid, and even gave him a James Bond quip as he died, no doubt agonizingly. Sure, that one has since been retconned into the origin story of the Joker, but a couple of issues later, he killed the first member of his Rogue’s Gallery — Doctor Death — by straight up trapping him inside a building that was on fire. Again, Batman sent his foe away with a one-liner: “Death to Doctor Death.”  In the very next issue, he snapped a guy’s neck, and when he eventually got his own title, he promptly hanged a villain called Monster Man from his Batcopter. He only got more family-friendly in 1941, when the “moral climate” changed and the writers decided to tone down the superhero’s impressive death toll.

9. The Sentry rips Ares in half

Sentry is basically Marvel’s take on Superman, but despite (or maybe, because of) this, he also comes with a whole host of mental issues, up to and very much including an evil, all-destroying persona known as the Void. This makes him a fairly volatile opponent at the best of times, because there’s no way of knowing just where the Sentry’s mind is this particular Wednesday.

During the Siege event, the Marvel comic universe’s resident war god Ares found this out the hard way when he was fighting a Norman Osborn-led incarnation of Avengers in Asgard. When Ares threatened Osborn, he was promptly attacked by the Sentry. The ensuing battle between the two powerful figures was extremely one-sided, as the unspeaking Sentry calmly manhandled Ares all over the area. However, he wasn’t content with just beating Ares: the superhero picked up the war god and ripped the poor dude in half with his own two hands. Ouch. 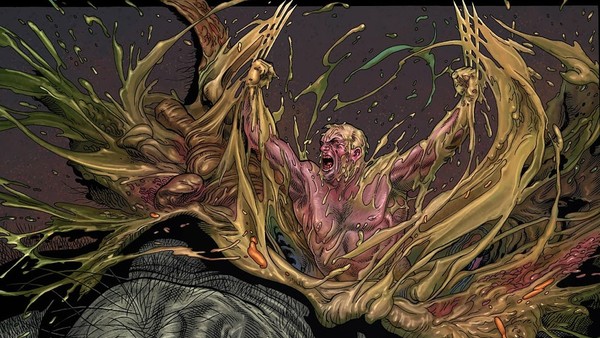 Wolverine and Hulk have battled a good few times over the years, and while the matchup between a small, angry Canuck with knives for fists and arguably the strongest creature on Earth might seem like an unfair one, Wolverine is notoriously the best at what he does… and sometimes, what he does is killing Hulk.

In the Old Man Logan comic’s King of Nothing storyline, an elderly Wolverine with malfunctioning powers finds himself in hot water when he faces Maestro, an evil Hulk from another dimension. It seems that this scenario would favor Wolverine even less than usual, especially as Maestro had already slapped him around so badly that it took him a week to heal (which is saying something, considering Wolverine usually shrugs off pretty much any damage you can throw at him). However, in their next encounter, it’s actually Maestro who ends up worse for wear. At this point, Old Man Logan has had enough of Evil Hulk’s shenanigans, so he simply cuts the big green guy’s head off. Guess that’s one way to keep the opponent from getting up.

7. Ant-Man bites the Blob’s head off

Some say that the Ultimatum storyline of 2009 was among the lowest points in comic book history, and fans of Ant-Man would likely agree. After all, who wants to see their favorite superhero bite off a supervillain’s head?

At one point of the Ultimatum event, the Ultimates (basically a gritty reimagining of the Avengers) ran afoul of the mutant supervillain Blob. Unfortunately, the Blob had already found group member Wasp, and was happily munching on her lifeless body. While this is gruesome on its own, what followed took things to the next level: Henry Pym’s Ant-Man, who was in Giant-Man mode at the time, was less than thrilled to see his wife both dead and being eaten. So he grabbed the Blob, lifted him off the ground… and in uncomfortably graphic detail, bites the villain’s head off and spits it out. Yes, really. Did we mention that fans didn’t particularly enjoy Ultimatum?

6. The New Warriors’ battle with a supervillain kills the villain, explodes a small town 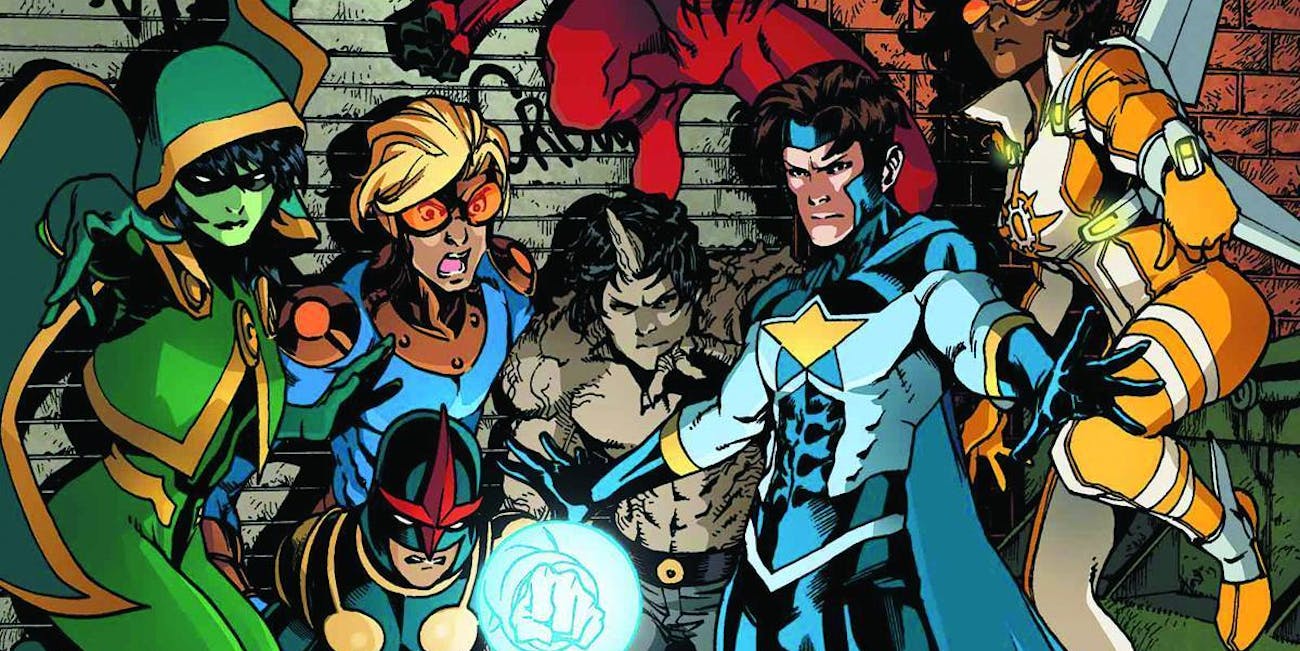 In the Marvel Cinematic Universe, the Civil War event is jump-started by an Avengers mission gone wrong, but the comic version actually focused on an obscure team known as the New Warriors.

The Warriors were a C-list superhero group that had resorted to starring in a Cops-style reality TV show. During a televised battle with a bunch of similarly low-rated supervillains in the small town of Stamford, Connecticut, the heroes discover during the battle that one of the bad guys is Nitro, who is essentially a walking bomb and significantly more powerful than anyone else at the scene. When attacked by the hero Namorita, Nitro lashes back with his own powers… and wipes away both teams, along with hundreds of civilians (including the students of a nearby school).

Sure, technically it was Nitro who killed everyone here, but since the rest of the villain’s team also died and Nitro only activated his powers because of the New Warriors’ stupidly brash decision to confront the supervillains in a populated suburban area, the heroes totally qualify as killers here, too.

5. Green Lanterns have a special move for murder Green Lanterns aren’t afraid to use the significant might of their power rings to kill people when needed. However, some of the more famous Lanterns like to dispose their villains in a much more personal manner: Oddly, Earth Green Lanterns Hal Jordan and Jon Stewart have both killed a man by physically snapping his neck.

Jordan’s neck snap moment came in 1994, and the situation was a bit more complex than you’d expect: The grieving, out-of-control Green Lantern was technically the bad guy here, and the Guardians of the Universe revived his worst enemy Sinestro to stop his rampage. Their ring-on-ring battle eventually degraded into a physical fight, which Sinestro fatally lost when Jordan grabbed him in a headlock and killed him. Stewart’s case, on the other hand, was a lot more tragic: He was forced to snap the neck of his fellow Lantern when they were interrogated and he feared his comrade was about to break.

4. The X-Men kill their villains all the time

Many of the X-Men have powers that are deadly in the wrong hands, and occasionally, said wrong hands are their own. Joining Wolverine’s rogue’s gallery is obviously a pretty good way for a villain to get stabbed, but the other X-people are no slouches, either.

Thanks to his optic blasts, Cyclops can end lives with just a quick glance, which is precisely what he has done to villains such as Donald Pierce, Berzerker, Candra and Mister Sinister (who eventually got better). The metal-skinned Colossus isn’t above killing the occasional bad guy either, as discovered first hand by Riptide and Proteus. Team members such as Rogue, Storm, Archangel, Bishop, Jean Grey and even the good-natured Iceman have also fatally used their powers against a villainous opponent at one time or another.

3. Spider-Man has a lot of lives on his conscience Your friendly neighborhood Spider-Man doesn’t seem like the kind of superhero who’d kill, but his presence on this list proves otherwise. However, to keep his hands comparatively clean, the writers tend to make the villains he physically kills zombies, robot duplicates and the like, while the sentient flesh-and-blood villains tend to meet their fates when Spider-Man positions them in the way that someone else will pull the trigger, or the villain’s missiles will return back to him, or some other ambient effect will take care of them.

Still, there are at least two times when Spidey has actually, personally killed a villain. One was D-list bad guy Modular Man, who he shocked to death with an electric gauntlet. Another, vastly more gruesome one was Morlun, a spider-person hunting super vampire who wanted to drink Spidey’s blood. Spider-Man managed to turn the tables on the villain when he developed a new spider-fang power (long story)… and fatally bit into Morlun’s throat instead. Plot twist!

2. The Flash has killed tons of his enemies 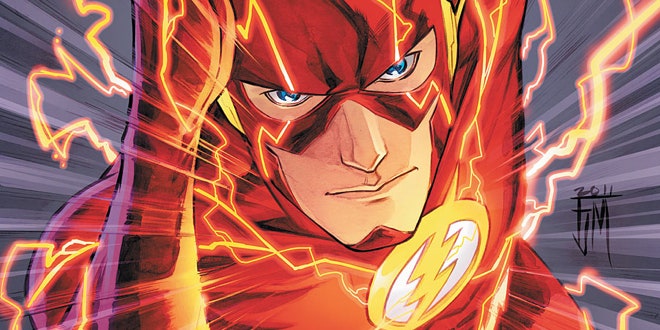 The Flash has a reputation as a goofy, fun-loving guy, but don’t let his easy-going demeanor fool you for one second — the speedster actually has one of the highest superhero body counts out there. Apart from the superheroes and assorted collateral, the various incarnations of the Flash have killed enough supervillains that he should be more feared among the criminal element than Batman.

The Top, King Shark, Mirror Master, Gorilla Grodd, Savitar and the Reverse-Flash have all met their ends at the hands of some version of the Flash — sometimes by accident, occasionally on purpose. Once, Barry Allen eradicated a species of sentient cloud creatures simply because he was preoccupied by a date he was supposed to be on. Another time, he teamed up with Wally West’s Flash to take down Darkseid and ended up killing the Black Flash, who is a speed-themed incarnation of death itself. Oh, and there’s also the time when Allen’s Flash became said incarnation of death. Wait, how does he get to do all that and still qualify as a hero? Live action versions of Superman are surprisingly fine with killing their enemies, but the comic book version usually has a little more chill. However, sometimes even the Man of Steel decides that enough is enough and takes out a villain. Assorted comic book versions of Superman have killed villains such as General Zod, Mister Mxyzptlk, Brainiac and Doomsday (though to be fair, he was only returning the favor with that one since Doomsday had already killed him once).

However, arguably the most famous of Superman’s comic book villain slayings came in the Injustice series, where he took down none other than the Joker — something even Batman has been able to resist doing all these years. In this story, the Joker attempted to give Superman his classic “everyone’s just one bad day away from becoming like me” treatment. After shooting Superman’s friend Jimmy Olsen and kidnapping the hero’s pregnant wife, Lois Lane, the Clown Prince of Crime drugged Superman and fooled him into thinking that Lane was the dangerous villain Doomsday. Reflexively, Superman flies “Doomsday” into space, only to come to and discover he’s just killed his wife and unborn child… as well as nuked the city of Metropolis, courtesy of a trap trigger that activated when Lane died.

At this point, Superman finally had enough. In full sight of Batman, he punches right through the Joker’s chest in rage. Then, in a doomed effort to ensure that no one has to suffer like this ever again, he inadvertently becomes the Earth’s feared dictator. The Joker would probably argue that he proved his point — if it wasn’t for that fist-sized hole in his chest.