Don’t worry Mom and Dad, we aren’t actually going to use the granddaddy of all curse words. You know the one — it’s so course and objectionable that using it twice in a movie gets you slapped with an R-rating. Use it in your music and you get the dreaded Parental Warning advisory label. And if you’re a local network TV or radio station personality, use it on air and you’ll find yourself fined, fired and looking for a job at the Circle-K. But once in a great while the word sneaks out from the dark underbelly of society and into the stream of public consciousness, and TopTenz writer Fred Hunt has 10 memorable examples for us.

10. Nicole Richie Has Some Words on Cleanliness

“Have you ever tried to get cow (crap) out of a Prada purse? It’s not so (flippin’) simple.” Thus was the sage advice dispensed by the wise voice of a generation, Nicole Richie. The innocuous quote was spoken live to the masses at the 2003 Billboard Music Awards. Unscripted and apparently in reference to the first season of her reality show The Simple Life, the Fox Network was taken to task for allowing the quote to get out over the air. After a 10 year court case the Supreme Court ruled against the FCC, citing the quote as an “Incident of Alleged Indecency.”

Wait, Nicole Richie’s words at the Supreme Court? Yeah, chew on that for a second.

One of the biggest rock stars of the 1970s didn’t play a lick of music. Hunter S. Thompson’s Fear and Loathing in Las Vegas was first published as a two part series in the pages of Rolling Stone and later released as a novel in 1972. In it, Thompson had some choice words on journalism as a profession:

“Journalism is not a profession or a trade. It is a cheap catch-all for (slackers) and misfits—a false doorway to the backside of life.”

Often cited as a textbook example of gonzo journalism, Thompson wove a tapestry of extreme drug use, blurred lines of reality and off-road racing into an American classic. Influential to authors and musicians alike, the book was made into a movie of the same name starring Johnny Depp in 1998. In Thompson’s work the profanity is sporadic to maximize its effect — when re-read today, the graphic drug use seems much more shocking than the swearing.

8. The Osbournes Are a Loving Family

The self-proclaimed Prince of Darkness, Ozzy Osbourne got his start with Black Sabbath. Then, after attaining success never before scored by a hard rock band, Ozzy left (or was kicked out, depending on your source) and became a solo artist. Ozzy’s drug fueled antics sustained him through the ’80s as he cranked out six multi-platinum albums in 11 years.

But rap and grunge crowded into the picture, pushing classic rock dinosaurs out. As fads came and went, someone at MTV came up with the bright idea to follow Ozzy and his family around and edit the footage for a reality show. The only problem was that the family dropped f-bombs like verbal B-17s — the first season of the show contained hundreds of bleeps in practically every other sentence. Despite this fact, or perhaps thanks to it, the first season became the most viewed series on MTV. The show ended up being a well-played marketing strategy to (relatively) clean up the family’s image for public consumption.

And it worked — Ozzy re-united with Black Sabbath and continues to record today, while Sharon went on to be a co-host on America’s Got Talent. As for the kids, well… Kelly sucks the air out of any show she appears on, while Jack does alright as a Hollywood gadfly. 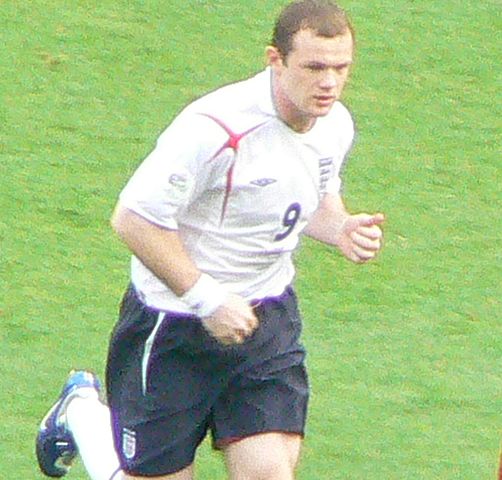 On an early Saturday morning in 2011 I was watching soccer on ESPN2 and saw Wayne Rooney put on a scoring clinic, leading Manchester United to a 4-2 victory over West Ham with a hat trick. I watch a lot of sports here in America, but I wasn’t well versed on the regulations of spewing profanity in the Queen’s English over in Great Britain. As I watched Rooney celebrate one of his goals, jubilation written all over his face, he ran to the nearest camera and started to scream the f-word in joy. A lot. I remember thinking to myself, “I guess the standards are a little different in England. Someone at ESPN is going to get fired for not censoring that.”

What I later learned was that the standards there are similar to the standards here, and Wayne Rooney found himself on the wrong end of a two game suspension. The incident made international news, in part because Rooney had been in a different kind of f-word scandal involving prostitution the year before.

6. Trent Reznor Wants to (Make Love) To You Like an Animal

“Closer” is Nine Inch Nails’ most popular song, creeping up to #41 on the Hot 100 Charts. That the song made the charts at all is a credit to songwriter Trent Reznor. He dropped one of the most offensive words in the language into the middle of the refrain, radio stations dropped the vocals for a split second, and viola, an instant classic. Not to be outdone by censors, Reznor then partnered with director Mark Romanek, took one of the most controversial singles ever to make the charts, and made one of the most controversial videos ever to promote it.

10 years after the fact, VH1 Classic named the video as the winner of its Greatest Video of All Time poll. You’ll still hear the heavily edited version of the song on the radio today, although with an extra five seconds you can find unedited versions of the song and the video readily available on the internet.

5. MC5 Wants (Young Music Lovers) to Kick Out the Jams

During the heyday of the Beatles, the Rolling Stones and Elvis Presley, a scrappy young band from Detroit was setting stages ablaze with a type of rock music not quite seen anywhere else in the world. MC5 would be the frontrunners of the punk music scene that would arrive a decade later, and on their 1969 debut album Kick Out the Jams the title track starts with Rob Tyner screaming out, “Kick Out the Jams, (Expletive Deleted)!”

The phrase became part of the rock lexicon and sparked half a dozen covers a generation later by those influenced by MC5’s signature tune. Even though MC5’s last studio album was released in 1971 the band continued to tour off and on for 40 years, interchanging members as they died off. The Motor City 5’s ultimate legacy may have more to do with drug-related deaths and arrests than hits.

4. Bono Comments on the Golden Globes

Before his career as a philanthropist, Bono was the lead singer of the ground-breaking U2. U2 released some of the most important albums of the ’80s, including The Joshua Tree and Rattle and Hum, but they started to lose a little steam as the new millennium approached. When you’re meeting with foreign dignitaries and attending World Economic Forums, it can be hard to focus on your day job.

But during the 2003 Golden Globe Awards, Bono channeled his inner rock star and described the ceremony as “really, really, (freakin’) brilliant!” Broadcast live, the comment sparked a national debate because the FCC “refused to fine NBC because the network did not receive advance notice of the consequences of broadcasting such profanity and the profanity in question was not used in its literal sexual meaning.” Translation: If you’re a great guy, you can use the f-word as an adjective.

CeeLo Green is a genius. I don’t care what kind of problems he’s had in his personal life — he’s an accomplished actor, songwriter, rapper, producer and a judge on The Voice. But despite scoring a #1 hit with his duo act Gnarls Barkley, his most impressive feat would have to be being nominated for a Song of the Year Grammy with his catchy single “(Forget) You.” Except he doesn’t say “forget” on the original, just the radio edit. The song was so good that it didn’t matter what the title was — both versions were hits, with the explicit version of the single being downloaded over five million times.

Way back in 1972 George Carlin came out with a comedy sketch called the Seven Dirty Words. Found on Carlin’s comedy album Class Clown, the words are loosely taken from the eight words Lenny Bruce prophetically predicted would land him in jail in the early ’60s if they were spoken aloud. The seven words are… ha, you can’t trick me, but one is the f-word and a second is a derivative. The skit caused a 40 year battle with the Federal Communications Commission  that tried to stake out where the line is in the United States between obscenity and comedy. The Supreme Court would later attempt to sort through these lines in order to map out standards for radio and television, which are still a bit blurry today. In 1988, 20th Century Fox released a 25 million dollar action movie starring Bruce Willis that went on to gross over $140 million worldwide. Despite being one of the stars on the critically acclaimed dramedy Moonlighting, Die Hard launched Willis’ career as a $20 million dollar-a-film movie star. The movie also launched the career of Alan Rickman and a slew of sequels that gave Fox over a billion dollars in ticket sales. All of this was built on the tagline at the end of the first movie when Bruce Willis reaches for his gun and utters the immortal words “Yippee ki yay, (expletive).”

Lots of action films have clever quips, but this one went on to be nominated as one of the American Film Institute’s Top 100 Quotes in Movie History. It’s so ingrained in the public consciousness that when A Good Day  to Die Hard came out 25 years later the tagline was “Yippee Ki Yay, Mother Russia.”

As a staple of basic cable programming for a generation, Die Hard 2 ran into controversy when fans complained about the absurd TV edit, which changed the iconic phrase to “Yippee ki yay, Mr. Falcon.” It didn’t fit into the plot, or with any with any characters’ names, or really with anything at all. Master Father? Mrs. Feather? Moron Fathead? I’m just stringing some random words together in the hopes of getting a Hollywood voice-over job.

We're not going to censor your access to more Top 10 Lists.
Read about Wayne Rooney causing more trouble on our list of controversial print ads, or brush up on your knowledge of racy movie posters.
Other Articles you Might Like
Liked it? Take a second to support Toptenz.net on Patreon!