Underwater caves are alluring, fascinating, and also a no-go zone for most explorers. While the subterranean zones known as caves capture our imagination, those that are underwater go a step further and significantly raise the danger factor. Not just flooded tunnels or inundated sea caves, many underwater cave systems extend for hundreds of miles, emerging in the middle of rainforest surrounded by land, but connecting to distant waterways. In this account, we discover the most spectacular and sometimes deadly subterranean aquascapes our world conceals.

Mexico is known to harbor some of the most remarkable ruins, beaches and forests on the planet, but it is also a land of truly monumental Cuevas submarinas, underwater caves. Underwater cave systems in Mexico include watery labyrinths so large and extensive that they have yet to be fully explored. In one dramatic case, two cave systems were found to be an enourmous single system when a connetion was discovered.

Determined to be the largest cave system on the planet, the Sac Actun Cave System was discovered to be one giant cave system totalling 215 miles in passageway lengths when connections between a smaller existing cave system, the Dos Ojos and the larger Sac Actun system were discovered. The cave system known as a cenote is filled with large quantities of fresh water that flow and rise to the surface like a strange river below the surface. Such a vast and complex cave must be explored with extreme caution due to the difficulty in finding one’s way back to the entrance if disoriented.

One of the creepiest and most deadly underwater caves on Earth, a sinkhole in Africa turns a rugged farm landscape into a rather unexpected and out of place portal to a watery hell. Vertical in shape, about 889 feet deep and 328 feet across, the potentially lethal Boesmansgat Sinkhole is a greenish, eerie water filled cave that plunges straight down into the depths of eroded and dissolved dolomite rocks. Nested amongst craggy rocks, the entrance to the cave would appear just to be an awkwardly placed farm pond, but its moderate size holds horrific secrets.

Located on a farm in South Africa, the watery pit is often completely engulfed in pond plants, making its surface appear an alien green. The rocky sides of the sinkhole rise as cliffs well above the water line, standing out amongst the surrounding vegetation. And are some of the nutrients to grow the floating pod plants and algae provided by bodies remaining in the water? Possibly. Unfortunately, a number of grisly deaths have occurred as divers, some of them recognized as experts in the field, failed to return from the impossibly deep, stagnant water filled pit.

Russia may be known as a land of taiga, icy roads and tundra, but the country is diverse and contains some remarkable underwater subterranean assets. And one of the most famous is characterized by not only crystal clear water, but actual crystal composition consisting of gypsum, together with an incredible underground extent. Located in Russia close to the Kungur River in the Perm region, Ordinskaya Cave is a popular cave diving destination and an All-Russia National Monument.

Stretching for over 3 miles, the mysterious, cold and dark cave is the most significant gypsum cave under the Earth, where water combines with tunnels of the Calcium Sulphate Dihydrate crystals known as gypsum. In this cave, the waters are clear to the point where explorers can see up to 150 feet ahead. Enlarged by the eroding action of the water, the soft gypsum is fragile but mysterious and extraordinarily dramatic in appearance. Eroded chunks in crystalline shapes form blocks, pyramids and spires, coupled with the cold water, which may reach minus 9 degrees Fahrenheit at water depths of over 50 feet.

The Bahamas may be seen as an idyllic getaway destination, but the Bahamas Caves actually represent one of the most dangerous submerged cave networks on the planet. Filled with sharp hazards, dark and disorienting and contaminated with toxic natural chemical deposits, the site demands great care. Sharp mineral deposits could deliver a puncturing injury, while hydrogen sulphide accumulations require a wary approach. Known as inland blue holes, the Bahamas Caves are hydrogeologically connected to the ocean.

Yet, tidal flow is sharply reduced, causing saltwater in the cave to be covered with a thin layer of freshwater. Tropical environments, combined with a lack of air circulation, accumulation of organic material and a highly limited level of water inflow and outflow creates the “perfect storm” of underwater, subterranean biochemical noxious hazards. In this stagnant and oxygen deprived environment, anaerobic activity causes the proliferation of bacteria. And these bacteria release the hydrogen sulphide that frequently sickens explorers of the caves and could kill a diver. Symptoms of disorientation from even moderate levels of exposure certainly go a long way to increasing the risk of getting lost in the underwater passages and drowning.

Norway is known for its breathtaking fjords, but a deadly, dramatic and strange underwater cave and waterway system that is lesser known but cold and convoluted also presents great intrigue in this Nordic country. In the centrally located Plurdalen Valley, a bizarre pond is located, known as the Plura. But it is actually not a normal pond, but the sudden exit of an underwater river. Diving into the pool takes you into a 1,640 foot passage that exits into a long cave with a water floor and airy ceiling.

After this point, a passage known as a sump, which is also considered to be the deepest sump cave on the planet appears in the cave, descending in a sharp U-shape until it is 443 feet below the surface. The sump rises up into Steinugleflaget cave, and then above Steinugleflaget, an exit is located in a cracked hillside 295 feet above the cave. Unfortunately, deaths have occurred due to the treacherous nature of the cold and lonely passages. In one case, a death sparked a highly dangerous yet ultimately successful body recovery effort in the most challenging sections of the cave system.

Florida is a land known for the Everglades, but the area contains much more than swampy surrounds stocked with prowling alligators. Florida is also a land that conceals water filled tunnels, naturally occurring and snaking their way below the surface of the Earth. Located in Florida, the caves of Eagle’s Nest Spring descend around 300 feet below the Earth’s surface, twisting into scarily narrow and dark passageways entirely filled with water. Despite its appeal, the exotic cave system has claimed lives due to its treacherous nature that still appeals to intrepid explorers willing to take the ultimate risk.

Since 1981, the snakelike maze that defines the layout of the underwater cave system of Eagle’s Nest has taken 10 lives to a watery grave. The sinkhole derived cave system has the shape of a kitchen sink pipe, descending down and up in a U-pattern. Alluring, the underwater cave system is concealed at its entrance by a deceptively normal looking pond, surrounded by dreamy looking trees, and a water body through which the cave must be accessed. However, the ability of the cave to disorient and entrap makes it a genuinely risky adventure, even to experienced divers.

While many of the most notorious caves described in this account are dungeon-like and known to be potential death traps, certain caves are less akin to demonic legends and more strongly associated with angelic accounts of folklore. An iconic sea cave, the Grotto Azzurra of Italy in the Capri area is beautiful, almost perfectly hidden yet absolutely spectacular once accessed.

The Grotto Azzurra is entered through a mere 3.2 foot entrance that is reached directly from the sea. Upon entry, the cave extends with an arcing roof and spectacular blue water, giving the cavern the appealing name. So spectacular is this location, which remained known to local fisherman but unknown to the rest of the world for centuries, that it served as a shrine to a sea nymph in Roman times. The cave system has been formed through focusing of the forces of erosion over time, giving rise to a mysterious yet iconic form that mixes the subterranean with the oceanic in its composition.

Switzerland might be most famous for its towering mountains, but it is also a land of subterranean lakes and underwater cave systems. In Switzerland, a cave system plunges far below the ground into portions of the Earth’s crust in a lesser known valley. Located in the “Vaudoise” Alps, the Chaudanne Spring Cave is located close to the town of Rossinière and was first explored in 1960. The depth of the system has so far been measured to a depth of 525 feet.

Known to be the deepest cave in the entire country of Switzerland, the spring-fed waters of the cave conceal mysterious passageways that have been explored in some daring attempts making use of rather makeshift means. Homemade equipment was used by pioneering explorers, including Michael Walz, to dive to 160 meters in 2006, while an exploration group dedicated to further mapping and documentation of the cave is active and well organized to plumb new depths as the exploration of the system advances. 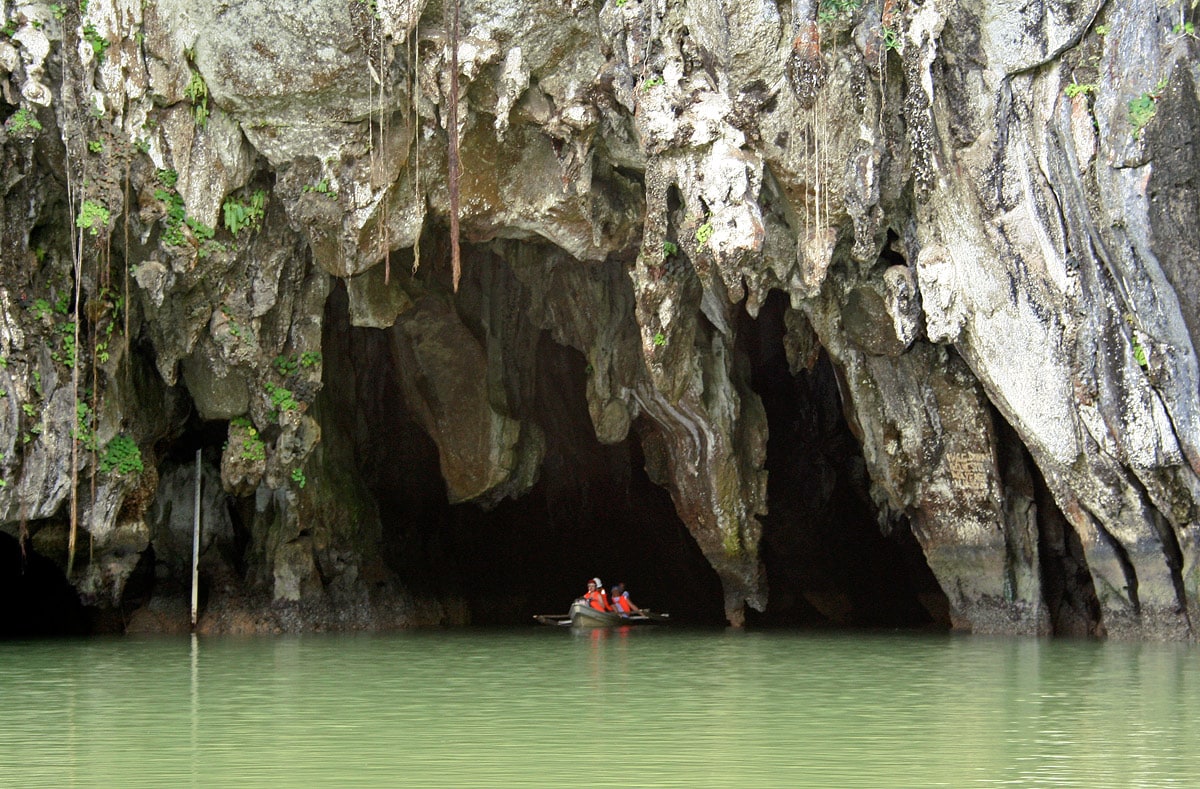 Polynesia is not only a place of islands, but a location where noteworthy underwater cave systems exist to capture the imagination of explorers. Among the most mysterious caves on Earth are underwater labyrinths that combine history and Earth science into a mysterious fusion of archaeological intrigue with and ancient geological events defined by more than a small degree of oddity. Descending 121 and 151 feet below sea level, the Caves of Nanumanga are remote underwater caves located in Nanumanga in Tuvalu, western Polynesia.

While newly known, the history of the caves is some of the most ancient and puzzling. Recently discovered by divers exploring the area in which they are located in the year 1986, the caves may have been used by ancient inhabitants at a different time, as indicated by what looked like burn marks. While exceedingly unusual as an underwater discovery, the burn marks from ancient combustion in what are now submerged geological formations clearly indicate dramatic events, such as apparent sea level changes that now leaves the caves below the surface.

Karst is not unique to Germany, though the limestone forms of spectacular height and oddity define the Karst region, China is a world center of excellence when it comes to stunning Karst environments. Located in Du’an county, Guanxi Province, People’s Republic of China, the caves of Daxing Spring are formed out of the subterranean portions of the spectacular and exceptionally exotic karst landscapes of eroded limestone that constitute the unusual geography of the region.

Amongst the eroded and pitted structures are caves descending under the Earth, many of them carved and expanded by flowing water. Water movement erodes limestone by pressure but also dissolves limestone chemically, increasing the size, length and depth of cave systems over time. Due to the amount of water in the porous subterranean landscapes, many of the caves are flooded, forming aquatic tunnels that can only be reached by divers. Diving in this spectacular, but potentially hazardous and geologically complex area requires careful safety measures include ample decompression due to the depths of the winding and watery cave system.