Since their invention, tanks and armored vehicles have ranked among the most terrifying instruments of warfare. However, not many people know that they’re not exclusive to military use, and that you don’t exactly need a huge weapons factory to build one. Those who do, on the other hand, have taken this information and gone to town. Lots of private citizens have built and customized their own tanks and tank-like vehicles, for uses ranging from heartwarming to horrifying. Here are some of our favorites…

Wheelchairs are a lot more common than you might think, to the point that the United States alone has an estimated 1.7 million wheelchair and mobility scooter users. Many wheelchair users are active people who wish to be able to live their life as normally as they possibly can. The problem with this, of course, is the lacking mobility of a wheeled chair. There are all sorts of surfaces you just plain can’t cross without use of your legs — sand, snow, mud, that sort of thing.

Jim Starr, who was confined to his wheelchair by an assortment of chronic neurological, back and joint problems, wasn’t about to let his condition prevent him from his beloved pastimes, though, thanks to the massive, $18,200 tank wheelchair his friend got him. The tank wheelchair has a top speed of 3.8 MPH and its treads can handle difficult terrain with ease. Unfortunately, there is one thing even a wheelchair tank can’t handle: the DMV (or rather, its British equivalent called DVLA). Much to Mr. Starr’s disappointment, officials have refused to register the Tank Wheelchair for use on public roads. Not because it’s a tank, though — it’s because they deem it too wide and heavy to qualify as a wheelchair.

Paintball is one of the most popular non-computer war games out there. The reason lies in its versatility: Variations of paintball range from fun, non-threatening shooting gallery games to simulated combat that is so extremely realistic that terrorists have been known to train with paintball games.

In Great Britain’s Leicestershire, a company called Armourgeddon has taken the logical next step and incorporated actual tanks to their paintball battles. They have modified a number of old FV432 tanks to shoot paintballs instead of bullets and artillery shells, and use these non-lethal attack machines to shoot what we can only assume is an outrageous amount of paint-filled artillery shells at each other. Teams of three people get a crash course to driving their tank and operating its turret, and after they can handle their vehicle, they’re unleashed on a battlefield against up to 14 other tanks.

8. Jon Phillips and the Panzer III

Jon Phillips loved tanks. He was particularly fond of Panzer III, a rare German medium tank that costs “hundreds of thousands of dollars.” Knowing full well that he could never afford one, Phillips drafted a plan B: He would build one himself.

Phillips and a number of other tank enthusiasts pooled their money together and bought a considerably more affordable AFV432 armoured personnel carrier. Then, they stripped it down and painstakingly rebuilt it into an extremely passable replica of their beloved Panzer III. The finished product has the same measurements and weaponry as the real thing, including a massive Rolls-Royce engine, a swiveling turret and armor plating that has been constructed in the same distinctive style as the original. What’s more, they didn’t just functionally build a rare tank from scratch — they actually upgraded the original. All of the replica tank’s weapons are painstakingly built to produce the same flash and bang as the original Panzer III weapons, but they also comply with modern firearms regulations.

Impressive as Michael Bay’s Transformers movie robots are, they are also extremely unrealistic. Especially the villainous Megatron, whose vehicle form in the Transformers 2 movie is an ominous, stylized alien tank instead of the Earth vehicle forms most of the other robots adapt.

Yet the impossible Megatron is the one Transformer that actually exists in real life… at least, after a fashion. In 2011, an enigmatic Chinese Transformers fan known only as Steel Legend  brought Megatron’s tank form to life using nothing but scrap metal. The frightening, five-ton Megatron Tank would probably be much higher on this list if it wasn’t for the fact that it doesn’t actually work – it has no engine and (logically enough for a sentient robot) no place for a human driver. Still, a tank doesn’t always need to move to be scary – and it’s hard to top Steel Legend’s creation in that particular respect, if only in the sense that you’d be flirting with tetanus if you so much as touched the thing. 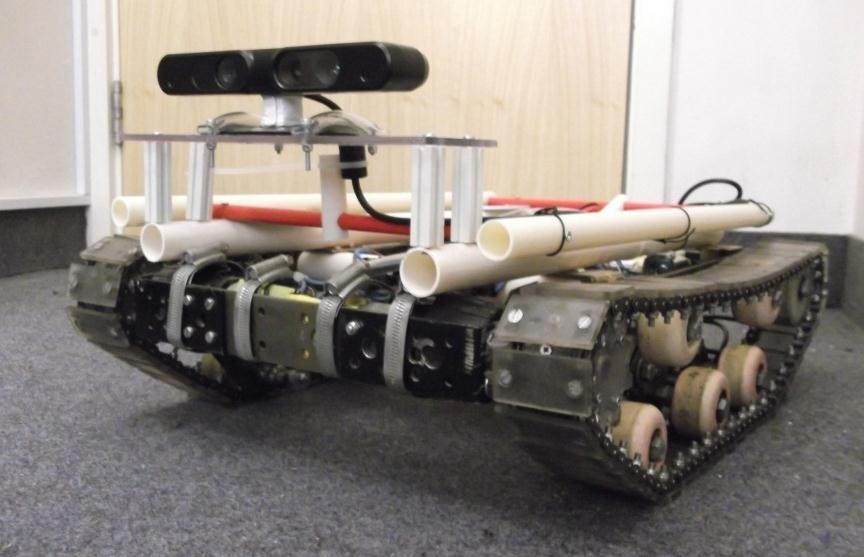 Tanky the Tank Robot is not the first of its kind, nor will it be the last. Panzer-style robots are relatively common, because treads are a fairly flexible means of transport. However, Tanky is unique in two ways. It can maneuver any environment without bumping into things… and it’s made from spare parts you probably have lying around at home. In fact, you can build one yourself if you like – the schematics are available online.

Tanky features motors from cheap cordless drills, and moves around on treads made from bicycle chains and skateboard wheels. Its brain power is provided by a laptop computer resting on top of the robot, and it looks at the world with a RGB-D depth camera. Simple as it may seem, Tanky is also rather clever, as it’s capable of 3D scanning its environment and maneuvering itself without running into obstacles.

As German forces discovered in World War II, the Russian winter can be a terrible thing, and it doesn’t get any nicer when you actually live there and have to brave the snow on a daily basis. Some enterprising members of the country’s DIY community have found an extremely metal solution to the challenges the unforgiving winter conditions present: Just turn your car into a tank with an easy conversion system.

This particularly inspired hack comes from the city of Chelyabinsk, a town with so much history in tank manufacturing that its unofficial nickname is “Tankograd.” What’s more, it doesn’t require too much rebuilding. They just drive their cars onto a pre-made tread platform (which is presumably a leftover from either construction machinery or the town’s famed T-34 tanks), strap them together, and start driving. Presumably, some wiring is also involved.

The end result looks exactly as awesome and strange as it sounds: Like someone put a ratty Lada on giant treads and took their brand new tank-car to the tundra. If they ever make a Russian version of Mad Max, we bet this is what every character is going to drive.

Music can be a terrifying weapon when used correctly. German artist Nik Nowak clearly understood this when he built his Panzer Soundtank, an alternative interpretation of a tank that doesn’t feature guns at all. Instead, the entire tank is a giant, mobile soundsystem sitting on treads.

Nowak can drive the Panzer Soundtank anywhere, turn his “weapon” on his unsuspecting targets and unleash a “wall of sound” from his state-of-the-art control table that features, of course, DJ equipment to go with the 11 massive speakers. What happens next is either a massive party or a lot of people holding their ears in agony, depending on what kind of music he decides to play.

The gritty underbelly of Mexico has been in turmoil for years, as numerous drug cartels fight for power and access to the lucrative US market. The brutal nature of the wars between the various drug lords and the government has claimed many casualties and keeps the public in a state of fear. It has also produced some very strange weaponry, in the form of Narco Tanks.

Narco Tanks are armored DIY vehicles that wouldn’t look out of place in a Mad Max movie. The various gangs have assembled these threatening “rhinos” from whatever they can find, in order to intimidate and combat their enemies. Some of them are absolutely massive: Built on three-axle truck beds and plated with inch-thick steel that can reportedly stop 50-caliber bullets, these insulated monsters can carry up to 20 mobsters into battle.

Although these massive, rusty hulks certainly look frightening, the Mexican military doesn’t feel too threatened, because the contraptions are quite clumsy and they have several weak points, such as the tires. Still, when it comes to threatening the locals and shaking up other gangs, there are few things scarier than a huge narco tank (or six) slowly advancing down the street.

Marvin Heemeyer took his zoning disputes more seriously than most men. In 2004, his long feud with his hometown’s officials came to a point where he evidently viewed the dispute as a full-on war, and was determined to have the last word in the matter… even if he had to hammer that word in with some sort of super-tank.

Which was handy for him, because he had already secretly built said super-tank.

Heemeyer was a welder by trade and a proud owner of a massive Komatsu D355A, a heavy duty bulldozer designed specifically for pushing large quantities of soil and building material around. He encased the Komatsu into a casing of steel and reinforced concrete and a video camera system for the driver to see without a windshield, leaving only small gun ports for semi-automatic rifles open. Then he drove his vehicle to town. Or, rather, through the town.

Heemeyer’s dozer-tank gleefully tore through 13 different buildings all around the town, each belonging to a member of the community that he felt had somehow harmed him. The police could do nothing — after all, what can a rifle or a handgun do to a concrete-reinforced tank? Eventually, the dozer either got stuck to the cellar of the 13th building, or its engine finally gave out under its massive weight. At this point, Heemeyer realized the game was over and shot himself. He had never intended to leave his dozer – in fact, he had intentionally sealed himself in.

Incredibly, Heemeyer was the only casualty in the rampage, which didn’t stop the media from dubbing his DIY concrete tank “Killdozer.” Still, he caused enough property damage (around $7 million in total) and endangered enough lives that it’s probably accurate to call this one of the most destructive do-it-yourself projects in history.

The ongoing conflict in Syria is like so many others before it: Well-armed, relatively well-fed government forces facing against rebels who are looking to become government forces themselves. In situations like that, the rebels tend to have more enthusiasm than equipment: They’re forced to raid government facilities for weapons and ammo, or just improvise and make do with what they have.

The Syrian rebels didn’t have much when they set out to build a tank, but they certainly made good use of what they had. In 2012, they unveiled the “Sham II,” a curious DIY tank that may look like a rusting metal box quickly slapped together atop an old car chassis, but is actually quite a clever piece of engineering. Built from scraps in just one month, Sham II features a “turret-mounted 7.62 mm machine gun” and a system of five external cameras that enable the operators inside to see.

The Sham II is operated in a manner most awesome: With a PlayStation controller and an LCD screen showing the external camera footage. Not only is it basically a video game, but there’s even a two-player mode: A second crew member can operate the machine gun with a separate controller.