NASA is always looking to the stars as are many amateur astronomers around the world. While our own solar system only has eight planets (sorry Pluto, we still love you), it’s estimated that there are billions and billions of them throughout the universe. And that includes over 4,000 exoplanets that we have confirmed so far. Some of them are just lifeless rocks in space but many of them are fascinating in the most sci-fi ways imaginable.

Saturn has long been the most dramatic looking planet in our solar system. The rings around Saturn make it stand out amongst the other planets. But among ringed planets Saturn takes a backseat to the exoplanet known as J1407b.

The first ring system discovered outside of our solar system, J1407b was first discovered in the year 2012. J1407b is not actually an exoplanet at all, rather a brown dwarf star. It’s encircled by over 30 rings, and each of those rings is tens of millions of kilometres in diameter. Taken altogether, the whole ring system is 200 times larger than Saturn. The rings contain enough dust to form a planet the size of Earth.

There’s also evidence that somewhere within the rings is a planet orbiting the dwarf. There are also gaps in the field of rings which indicate there are exomoons orbiting the star in there as well. It’s kind of like if Saturn itself was the whole solar system with other planets just orbiting in the dust rings around it.

Forty light years away from Earth, orbiting a massive Red Dwarf star, is what some scientists have called a water world. This one doesn’t have Kevin Costner on it however, but it does seem to be a massive steamy world of hot water.

The planet, known as gj 1214b, is 2.7 times the size of Earth. It also weighs 7 times as much and has a surface temperature of 446 degrees Fahrenheit.  Despite the potential presence of all that water, it certainly does not seem to be fit for life at least not in the ways we understand it. That said, hydrothermal vents in the Earth’s oceans are literal hotbeds for life and many of them can sustain temperatures of over 700 degrees Fahrenheit.

Scientists believe that the planet may have formed further from its sun initially where frozen water may have been plentiful. As it gradually moved towards its own sun, it would have heated up creating the unique planetary atmosphere that it has right now. There’s speculation that there may be substances that don’t exist on Earth there such as superfluid water and hot ice. The planet known as 55 cancri e is twice the size of Earth and experiences a year in 18 days. It’s charred black and intolerably hot, with a surface temperature of 4,900 degrees. What attracted scientists to it the most was the idea that perhaps this planet is formed from diamond.

Early modelling of the planet’s interior suggested that it might be composed mostly of things like diamond and graphite. There is some debate now because the star that the planet orbits has a higher amount of oxygen than carbon. That will affect the makeup of 55 cancri e and potentially what it could be made of. Of course all of this is still speculation because determining for sure what the planet is made of is very difficult when you’re just analyzing data from Earth.

Though it’s only a theory, it’s still a possibility that this exceptionally hot planet is one of the most valuable in the universe.

While the concept of a planet made of diamond isn’t too hard to wrap your head around, the weather on HAT-P-7b takes things to a whole new level.

Located 1,000 light years from Earth, the planet is 16 times larger than our world. And when the wind starts blowing there, it blows sapphires and rubies. The planet is a gas giant with an extremely volatile weather pattern that causes violent wind storms on a regular basis. The winds shoot around a mineral called corundum which is what rubies and sapphires are made of.

If it wasn’t clear this planet could never be habitable. To begin with as a gas giant 16 times larger than Earth, there was simply no place for humans to go if we could ever reach such a place. It’s also tidally locked, which means one side of the planet is constantly facing its sun and one side is constantly facing away. The sun side is at a all me 2,860 degrees Kelvin

Over 64 light years from Earth you’ll find HD 189733 b, an exoplanet that has some of the worst weather in the Universe. Imagine winds that reach speeds of 5,400 miles per hour. And when it rains you’re not being pelted with water, it’s shards of glass. Images of the planet show a rich, ocean blue colour. But it’s not caused by water or oxygen in the atmosphere, rather silicate particles.

If rain made of glass blowing at 5,400 miles per hour wasn’t bad enough, there’s also evidence that it’s not just solid glass raining on the planet. It also rains molten glass. Temperatures on the giant planet reach over 1,000 K, and it has a mass 13% higher than Jupiter so there’s no chance that life is going to thrive here. The universe is incredibly old so the opportunities to study new stars and new planets is not easy. Researchers have an unprecedented opportunity with the planet called AU Mic b. The Neptune-sized planet is orbiting a young star known as AU Microscopii. The star is surrounded by a field of debris leftover from its formation and the planet seems to be the first one that has coalesced in the debris field.

The star is about 20 million to 30 million years old. Ancient in human terms but incredibly young in stellar terms. Our sun is 150 times older, for instance. The little planet around it completes a rotation around the sun in under 9 days, and it weighs 58 times less than the Earth. The opportunity to study a planet so young in its formation has never presented itself before. While finding a very young planet is a difficult task, at the far end of the spectrum it is also unusual to find an extremely old world. Located 12,400 light years from Earth in the middle of the Scorpius constellation is a planet 2.5 times the mass of Jupiter known as PSR B1620-26 b, and sometimes either Methuselah or the Genesis planet. It’s the oldest known world in the entire universe so far. It’s believed to be 13 billion years old, having formed when the universe was just 1 billion years old.

For some perspective, the Earth itself is 4.5 billion years old. This older planet is about three times as old as the Earth, and orbits a pair of burned-out stars in a cluster of 100,000.

When we think of the darkest places in space a black hole is obviously what comes to mind first. It turns out that black holes are not the only things from which most light can’t escape. The exoplanet TrES-2b is the darkest discovered in the universe. It only reflects 1% of the light that hits it, making it like a shadow in space.

Located about 750 light-years from Earth, the planet is twice the size of Jupiter and orbits a star not unlike our own sun. It is able to reflect less light than either coal or black acrylic paint. As for why the world is so dark, that is still a mystery. It could be anything from a lack of certain clouds in the atmosphere which naturally reflect light like we see on Jupiter, or it could be the presence of various elements that absorb light rather than reflected naturally.

While the planet is mostly black, it’s not 100%. It actually emits a red glow, making it somewhat sinister when you consider the whole picture. 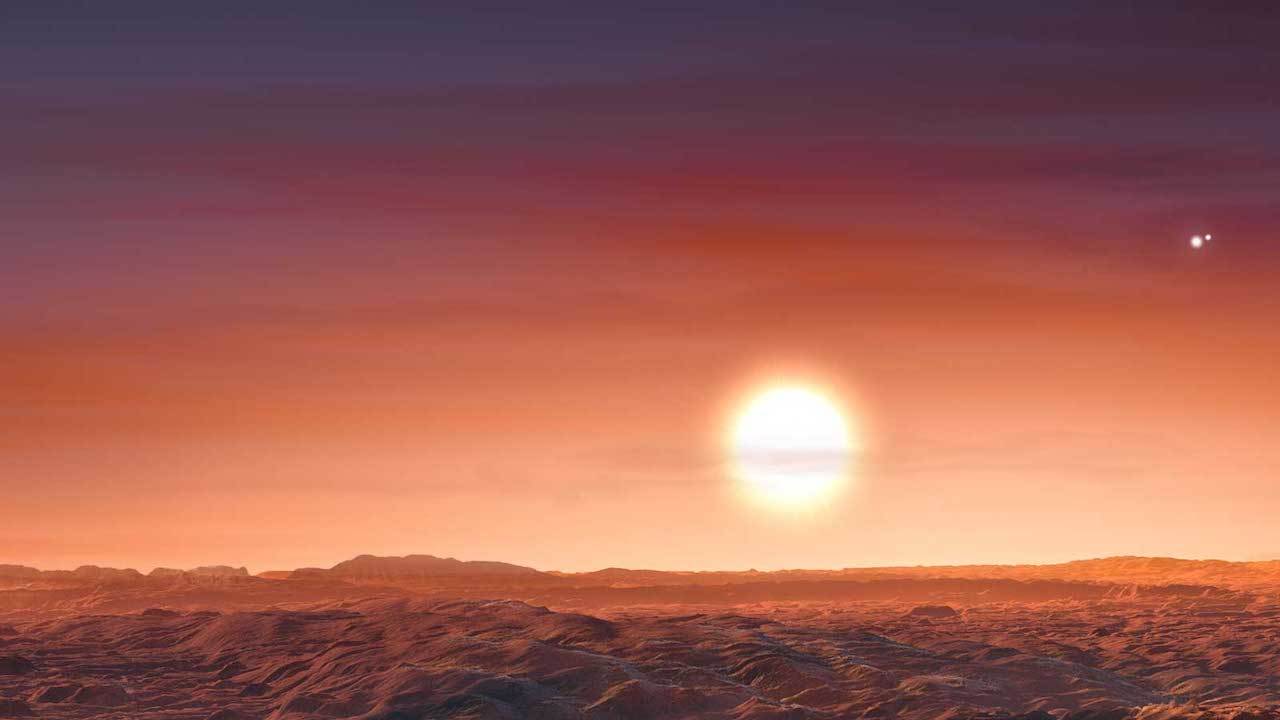 A staple of science fiction is the idea of a planet that orbits multiple suns. The most famous example is probably Tatooine in the Star Wars franchise. While it makes a cool image in fiction, it’s not as far-fetched as it might seem. It turns out there are worlds that have multiple suns, not simply two. For instance, located just under 23 light years from Earth is one planet in particular that actually has three suns in the daytime sky.

Known as LTT 1445Ab, the planet orbits one of the red dwarf stars in the system while the other two are further off. If you were standing on the surface of the world the Sun would rise as normal and in the distance you would see two smaller red stars even in the middle of the day. They’ve been like him to red eyes that would always be staring at you from the sky.

The world is 1/3 larger than the earth but also much more massive, Are there any times the mass of our planet. It’s also incredibly hot on the rocky surface. Not the scorching heat you’ll find on some planets, but still and unlivable 320 degrees Fahrenheit.  Scientists are hoping to soon be able to actually analyze the atmosphere of the world to learn more about it.

The world known as WASP-121b has some bizarre, standout qualities. To start, it’s what’s known as a super Jupiter, a gas giant that’s larger than the one in our own solar system. The world is so hot it’s able to vaporize metal and gas made from iron and magnesium has been observed escaping the atmosphere.

Located 900 light-years from Earth, the atmosphere of the planet reaches 4,600 degrees. UV light from the sun that orbits which is hotter than our sun Is responsible for heating the upper atmosphere and causing these gaseous metals to escape. Its proximity to that star has also caused the planet’s shape to warp. Rather than the spheroid that we are used to when we think of planets, this one is actually football shaped due to the effects of gravitational tidal forces.