Ancient Egyptian civilization is well known for its advanced culture, mummies, pharaohs, and majestic pyramids. As its population expanded along the mighty Nile, so did appetites and eating habits that would produce a new societal class of people: foodies.

Archaeological discoveries of tombs and other artifacts provide us with detailed insight into Egyptian cuisine. The main takeaway (sorry, cheap pun) is that they generally ate much better than their contemporaries, feasting on a wide range of eclectic menu items.

Hungry? Time to hit the kitchen like an Egyptian. Here’s a riddle: what African mammals are cute and cuddly but covered in 6,000 prickly quills? Answer: Atelerix Albiventris — aka the hedgehog. With an average length of fewer than 12 inches, this adorable mammal takes its name from the garden hedges they inhabit and their pig-like grunts. Thousands of years ago, however, Egyptians had another word for them: dinner.

The small night prowlers have back muscles, which allow them to raise and lower their quills in response to threatening situations. The stiff, sharp spines, unlike those of the porcupine, are neither barbed nor poisonous. Although hedgehogs hibernate all day and consume mostly insects, they are also fierce hunters and mostly immune from many toxins. As a result, they can attack and snack on vipers and scorpions for an odd but well-rounded diet.

Not surprisingly, the Egyptians admired the hedgehog for its survival skills in the hot desert climate. This can be found reflected in artwork and amulets and as well as a symbol for rebirth after death because of its reverse hibernation. The actual eating of hedgehogs involved an ingenious process in which the body was covered in clay and then baked over an open fire. Afterward, the hardened clay would be cracked open and removed, taking the prickly spikes with it. People living in the fertile Nile Delta harvested dense thickets of papyrus stalks for a myriad of uses, including paper, baskets, and clothing. The tall, sturdy plants also provided a readily available food source. According to Herodotus, the plant could be baked and eaten and formed a common staple of the Egyptian diet.

Similar to celery, the roots can be stewed to form soups, or simply eaten raw. The abundance of the papyrus made it accessible to the masses despite high demand for all the other applications — especially the state-run production of writing materials.

The word ‘paper” is derived from ‘papyrus’ and made from the pith found inside the stalk. Strips were then dried under pressure and formed into rolls that could be left intact or cut into sheets. Afterward, well-trained scribes (today, known as writers) created important documents such as administrative records, legal contracts, and religious texts. With its awkwardly skinny legs, long neck, and big beady eyes, the ostrich is never going to win any animal kingdom beauty pageants. But in ancient Egypt, these odd-looking flightless birds were considered the total package and highly regarded for their eggs, meat, and shaggy feathers.

Struthio camelus “camel bird” is an indigenous breed to North Africa that can live up to 75 years in hot desert climates with limited water source. Herders domesticated ostriches in specially designated farms, where the eggs were valued for their size that are 20 times the weight of an average chicken egg. Additionally, the durable, hard shells could be repurposed into making jewelry or utilitarian items such as cups and bowls.

Ostrich plumes were equally coveted and used for decoration by the royals and members of the wealthy elite. The feathers also symbolized truth and justice. The decorations served as the emblem of the goddess Ma’at, who personified the virtues as the patron saint of the judges. When attempting to catch a gazelle, predators had better bring their “A” game. This swift species roaming North Africa belongs to the antelope family and has been clocked running 100 km/h (60 mph). They also possess a unique behavioral trait called “stotting” — a natural defense mechanism. This allows them to spring into the air with the grace and power of Rudolf Nureyev before sprinting away like Usain Bolt. In other words, (extremely) fast food.

Similar to Native American culture, ancient Egyptians held a deep respect for the animals they relied on for food. Prayers and rituals were performed to ensure the hunt’s success that typically involved weapons such as arrows and spears.

Pharaohs were often seen in paintings leading a triumphant kill — a crafty PR tactic that helped reinforce their image as powerful rulers. Several tombs have been discovered, revealing lavish dinners that feature honey-roasted gazelle, a detail that suggests the celebrated meat would have most likely been reserved for royal or religious leaders.

Whether roasting over an open campfire or making s’mores at home in the kitchen, marshmallows are a yummy dessert that originated in Egypt over 4,000 years ago. The word for the beloved treat is derived from the mallow plant that grows wild in marshes found along the Nile’s wetlands.

Today, the marshmallows found in the aisles of your local supermarket are made from corn syrup, gelatin, dextrose, artificial colors, tetrasodium pyrophosphate, and other polysyllabic ingredients that help make these fluffy treats so damn tasty. Ancient confectioners, however, took a more organic approach.

The candy-making process involved squeezing sap from the mallow plant and mixing it with nuts and honey. The sweet dish would then be served on special occasions and typically consumed only by royal subjects. 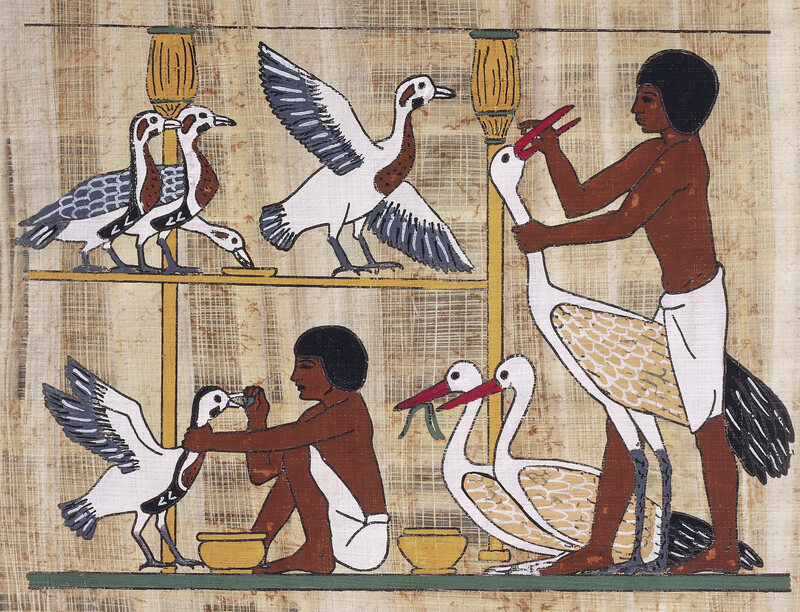 The controversial practice of force-feeding waterfowl such as geese is usually associated with France and its famed production of foie gras (fat liver). But as far back as 2500 BCE, Egyptian cooks were busy fattening up birds as a prized delicacy for the banquet table.

The procedure, known today as gavage, replicates how the winged creatures pack on extra calories to store fat for long migrations. However, animal rights groups have long advocated against the making of foie gras on the grounds of cruelty and severe abuse. But the French can’t be blamed entirely, as Egyptian cooks are largely responsible for pioneering this foul technique (sorry, another cheap pun).

An illustration can be found at Saqqara’s necropolis on the tomb of Mereruka, an important royal official during the 6th Dynasty. The bas relief scene shows workers holding an assortment of birds by the neck while shoving food down the throats of geese, ducks, and cranes. Like many other Egyptian customs, the fattening of geese soon spread throughout the Mediterranean region, as noted by the King Agesilaus of Sparta after visiting Egypt in 361 BCE. Hippopotami were both feared and revered as paradoxical beasts. The lumbering land-based herbivores spent most of the day casually lounging in the water to protect their enormous bodies from the scorching African sun. But at night, however, the hefty herbivores often became violently aggressive — and hungry — consuming 100 pounds of grass and decimating crops.

Despite weighing up to 6,000 pounds, an adult hippopotamus (Greek for “river horse”) is capable of outrunning most humans and inflicting deadly bites with its tusk-like canines. The large mammals can also swim, stay submerged for over five minutes, and upend boats with ease. Although unfettered by nearly all other animals in the wild, Egypt’s hippo population were eventually hunted to extinction for their meat, skin, and teeth.

Taking one down required the adept skills of a well-organized hunting party. Artwork dating back over 6,000 years depicts men on a small boat, using harpoons consisting of a wooden shaft with a metal or bone tip. Papyrus texts of how to treat a hippo bite are also extant. Ouch.

Long before rock stars hit the sauce from dusk till dawn only to wind up in rehab (and/or doing reality TV), Egyptians started EVERY day with beer for breakfast. Lunch and dinner, too. No, these ancient people weren’t bumbling boozehounds but rather savvy urbanites following a surprisingly healthy regimen embraced by all society members — even children.

Thanks to annual flooding on the Nile, agriculture fuelled Ancient Egypt’s robust economy. The bounty yielded an abundance of emmer wheat, which provided the two primary staples: bread and beer. Although only royals and the upper class of society could afford to eat meat regularly, beer flowed day and night as the preferred beverage at every meal.

The brewing process involved using bread with a high yeast content that would be crumbled into a vat and naturally fermented in water. Like the German hefeweizen style, the thick and cloudy suds contained several beneficial nutrients such as magnesium, selenium, potassium, and B vitamins. Beer was also safer than drinking water from the river — not to mention helping workers stay motivated while building pyramids in the hot sun all day long.