Harry Benson is a photojournalist that I recently became familiar with. Born in Scotland, Harry Benson was introduced to the United States when he landed with the Beatles when they toured America in 1964. His work has not only spanned decades but he has also photographed a wide variety of places and people. Some of his more notable work includes photographing every U.S. president from Eisenhower to Obama.

He has been in the right place (or the wrong place) on many occasions allowing him to capture some of the most poignant moments in America history. He was just a few feet away when Bobby Kennedy was assassinated; he was in the same room when Nixon resigned and was there during the Meredith march with Martin Luther King, Jr. He was there when the Berlin Wall separated a country and was there to photograph it when it fell.

He gained most of his fame as a photographer for LIFE magazine from 1970 to 2000 and currently works for Vanity Fair Magazine, and photographs for Architectural Digest, Newsweek and other major magazines.

If you have not heard of Harry Benson then you are in for a visual treat. He has taken many wonderful photographs that run the gamut from the light-hearted and fun to the tragic and haunting. I have chosen what I feel are 10 photographs that capture the depth and beauty of his work across a wide scale. You can see more of his work at his website: http://www.harrybenson.com and get a more intimate look at this legendary photographer when you read On the Road with Harry Benson.

When I could find his own words about a photograph, I included them under the photo. If not, I gave some commentary on the subject matter. In no particular order, the photography of Harry Benson… 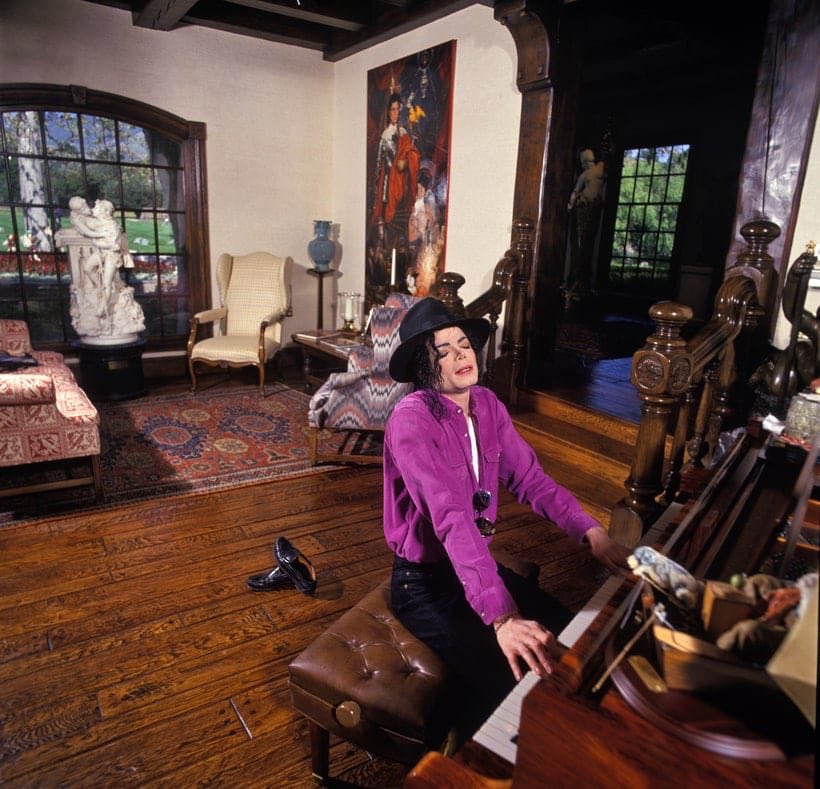 One could see how Neverland could take Michael’s mind off all his worries and transport him from the reality of his stressful life. He had everything he wanted there. I got the impression that in no way was Michael a recluse. He read the papers and kept up with the news. Once he asked me what I thought of the Reagans, who were in the White House at the time. He was also curious to know what the Russian author Aleksandr Solzhenitsyn was like, as Michael had seen my photograph of him. Michael made a point of knowing who was who, while all the time those sad eyes were searching, looking closely at me. Occasionally he would break into a laugh, but mostly he was just looking. Harry Benson, Photographer

I also like this photo of Michael Jackson taken by Harry Benson. It is more introspective and I believe captures the other side of his personality. I couldn’t find any commentary by Harry Benson and this photograph more than any other piqued my interest into what he might have to say about it. The visual is startling in many ways. The KKK brings to mind violence, burning crosses and bigotry so to see a woman caring for her child is contrary to my perceptions. When I think a moment longer, it saddens me as I realize this innocent child will have little choice but to follow their parent’s short-sighted and prejudice way of life. 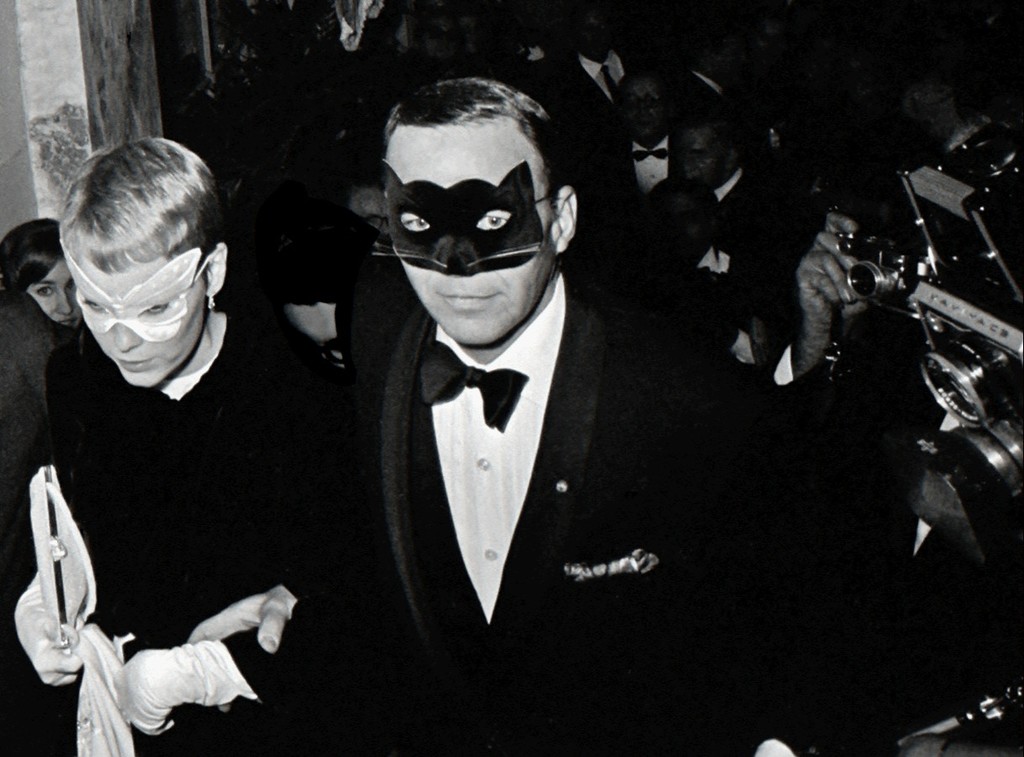 “To this day it was the biggest party I ever shot.  Capote’s ball was unique.  Everyone wanted to be there.  People who weren’t invited went out of town.  I was at the top of the stairs at nine o’clock and caught Sinatra as he was walking in.  He couldn’t get past me.  He felt really stupid in that mask.  Someone had just yelled to him, ‘Hey, there’s Frankie Batman.’  You can see the anger in his eyes behind the mask.  He was this tough guy thinking, ‘What the hell am I doinig here?’  Mia Farrow had that precious, elfin look, but she was tough as nails too.” Harry Benson, Photographer 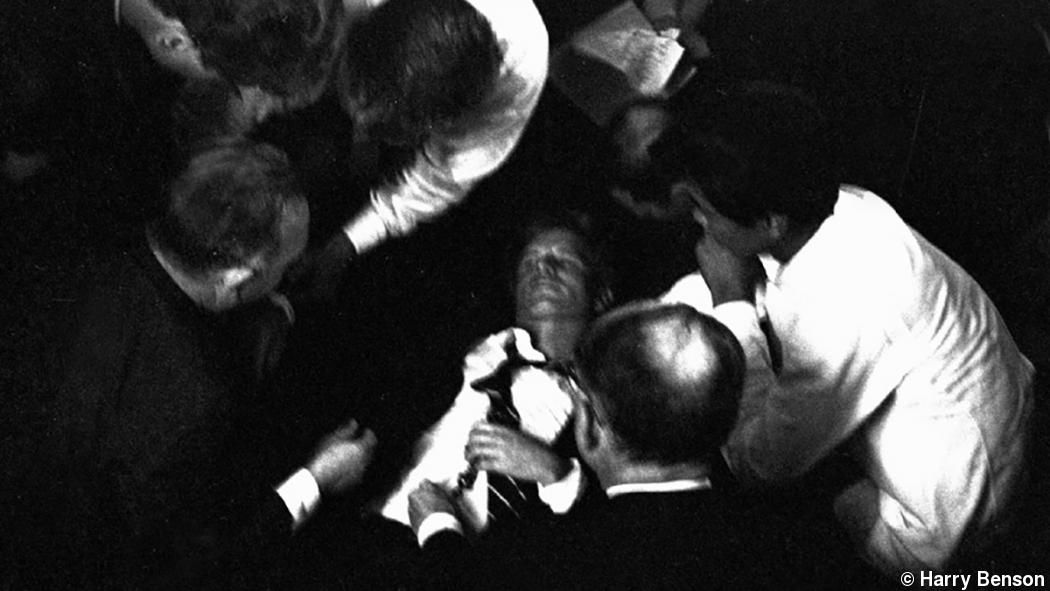 At the victory party following the California Democratic presidential primary, Senator Robert F. Kennedy made his way down from the podium, through the crowd, and out into the kitchen of Los Angeles’ Ambassador Hotel. Benson trailed at his heels. But within seconds, the victory chants were replaced by screams. Kennedy had been shot in the head with a .22 caliber gun, and lay dying at Benson’s feet. “A Kennedy is literally shot in front of me,” Benson said. “I’m saying to myself, ‘Don’t **** up today. **** up tomorrow.’ This is it. This is what I came into the business for.” Benson, the only photographer on the scene, didn’t hesitate, and snapped now-iconic images of Kennedy on the floor, and a fear-stricken Ethel Kennedy turning around to scream: “Give him air!” Benson shot five rolls of film of the assassination, and put each roll in his sock, “in case a policeman with a gun asked me for my film.” He says: “I’d rather photograph for life than die for it.” Harry Benson, Photographer Nixon resigned the presidency on August 9, saying farewell to his Cabinet and White House staff with his family by his side. You can really see the pain in the faces of his family. I truly believe they are suffering with him. 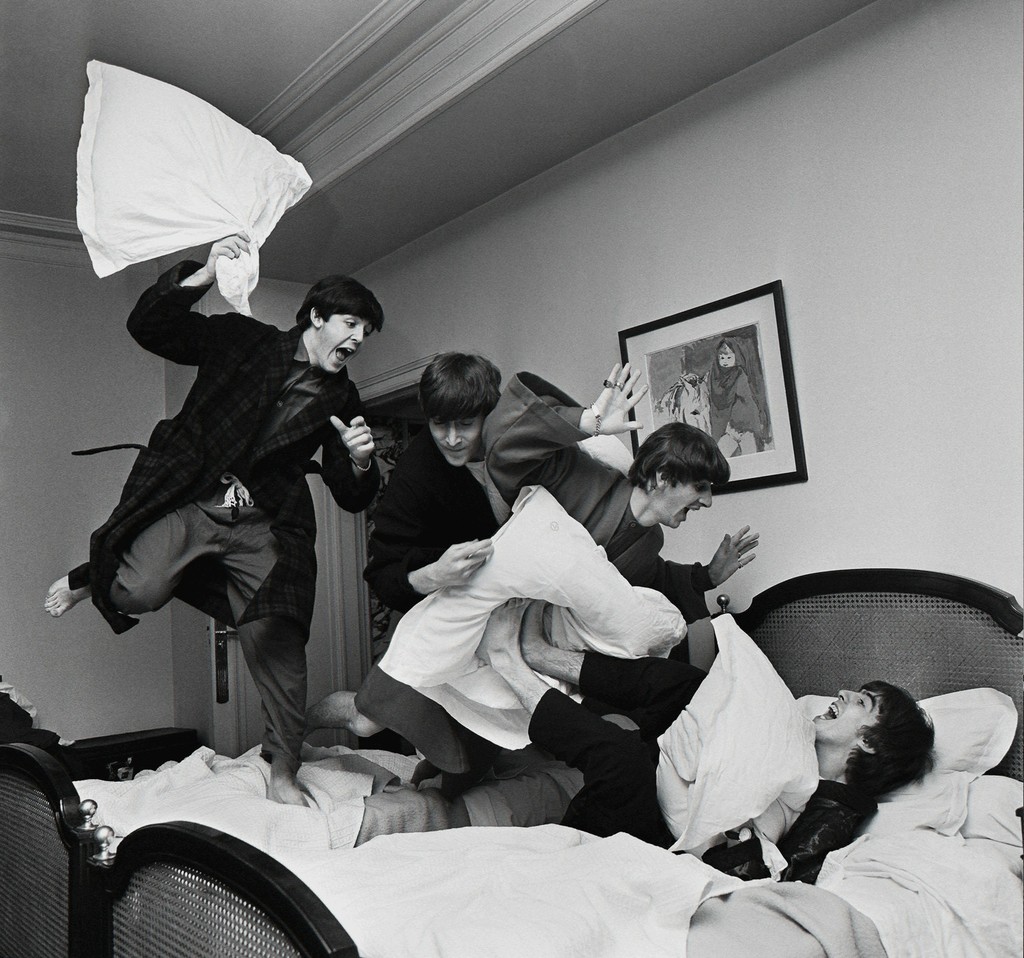 The Beatles, Paris, France, 1964: “It was 3am after a concert at the Olympia in Paris in January 1964. They had so much pent-up energy after a performance, and they really couldn’t go out because they would be mobbed. So we were sitting around talking and drinking. Their manager, Brian Epstein, burst into their suite at the Hotel George V to tell them “I Want to Hold Your Hand” was No. 1 on the American charts, which meant they were going to America to be on ‘The Ed Sullivan Show’ … I heard the Beatles talking about a pillow fight they had had a few nights before, so I suggested it. I thought it would make a good photo to celebrate. At first they said OK, but then John said, no, it would make them look silly. Then John slipped up behind Paul and hit him over the head with a pillow, spilling his drink, and that started it.” Harry Benson, Photographer

I included a second Beatles photo by Harry Benson that I actually like more than this one, but the commentary on the pillow fight was too good not to share. This photo shows the Beatles in a more candid moment that you don’t often see. Over 250,000 people joined together to share their sorrow for John Lennon’s senseless death. This photo is taken in Central Park December 14, 1980. 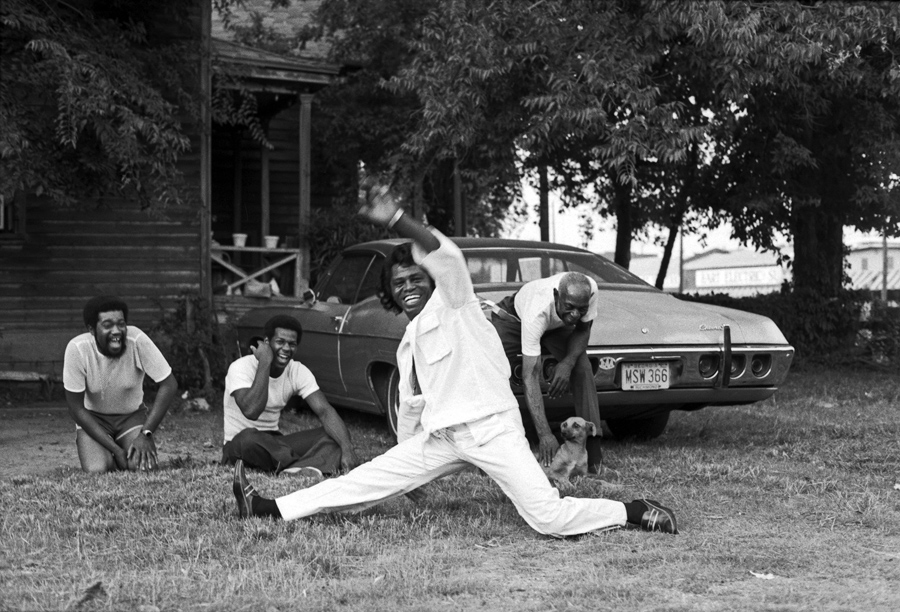 “In Augusta, to photograph James Brown, these pictures were taken when he suggested we go for a ride. He told me he would show me ‘his town.’ So we jumped into an old car and drove around. He would stop the car when he saw someone sitting in their yard, run up, do the split, yell out, ‘I feel good,’ and jump back in the car and drive off. It was all so spontaneous and hilarious, and it took the onlookers by such surprise. Brown was a fun-loving character and a good sport.” Harry Benson, Photographer

I smile just thinking about the fun reactions from the townspeople as James Brown gives a mini-performance for each. “Governor Clinton had announced his candidacy for presidency and this was a quiet moment before the hectic campaign began.” Harry Benson, Photographer

Just thinking about everything that would  happen to the Clintons after this photo is amazing. Someone should make a movie. 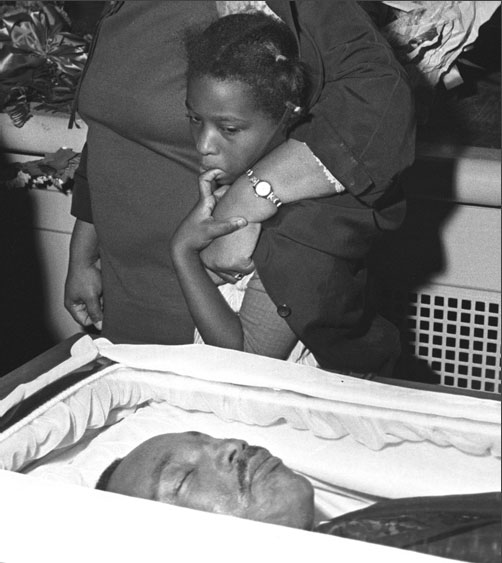 This photograph really touched me. While it is tragic that any man should be murdered or assassinated for his beliefs it is even more tragic that a child should grow up without their father. No child should be have to see a parent in a coffin whether that parent was Martin Luther King, Jr., or anyone else. 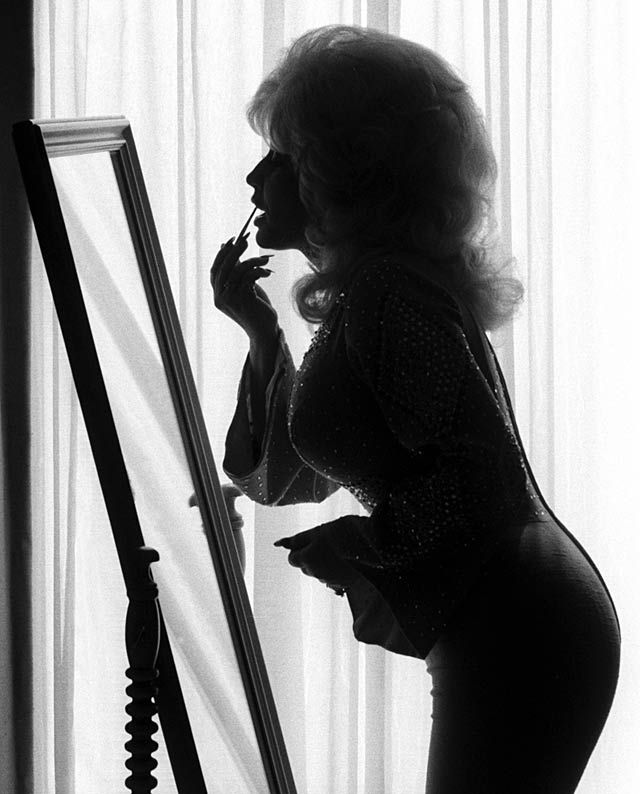 “Dolly Parton makes everyone feel right at home with a down-home welcome when she meets you. She was getting ready for me to photograph her. I walked over to ask when she would be ready and saw her standing near a window, putting on the finishing touches of her makeup. I said, ‘Dolly, don’t move, just keep doing what you are doing,’ and she obliged. It was a completely natural picture, no lights were set up, yet it was the one I liked best from that day.” Harry Benson, Photographer

Of course you think of Dolly for two things, her bust and her hair and both are captured perfectly in the photograph. Or is that three things?