Every once in a while when you’re driving down the street you’ll see one of those houses that has an old, rusted out car parked out front that looks like nature is slowly reclaiming it. Most major cities have at least one scrap yard somewhere too that’s just wall to wall old cars. And even though we don’t think about it often, the same thing has to be true for airplanes. Airplane boneyards are those massive lots that are set aside for defunct aircraft that are either waiting to be recycled or just waiting to waste away. Here are 10 of the biggest in the world.

In March of 2019, airlines around the world grounded their fleets of Boeing 737 Max 8s after the second deadly crash involving the plane. Alice Springs, Australia, officially the largest boneyard in Australia and one of the largest in the world, became home to many of these unwanted Boeing monsters from across Asia. The owner, a man working on his own pilot’s license at the time, thought it would be a good business decision to set up a boneyard in the arid climate of the Australian Outback with all that empty space sitting around.

Because the climate in the Australian Outback is dry, it’s more well suited to storing these multimillion-dollar planes than their home countries, which may have much higher humidity an annual rainfall.

Though there are numerous planes stored at the Alice Springs facility, the owner is hesitant to use the word graveyard since craft like the Max 8s all potentially could be reactivated at some point in time. The technology isn’t defunct so much as it’s been back-burnered.

Ninety miles northeast of Los Angeles you’ll find the Southern California Logistics Airport which is home to the former George Air Force Base. George was opened as an advanced flying school by the Army Air Corps back in 1941. After the military no longer needed the base, the Logistics Airport took over as the town where it’s located, Victorville, California, is one of the most important transportation hubs in the state (60% of all goods that come in and out of Southern California have to go through Victorville).

While the logistics airport currently serves a number of airlines for their logistical needs, it also does have the boneyard on site as well for numerous defunct aircraft. Today, aside from its facilities that maintain and even paint aircraft for airlines and companies around the world, the boneyard also has a massive collection of 747s. In fact, just like Alice Springs in Australia is home to a number of those Boeing 747 Max 8 from Asia, the American fleet were retired to the Southern California Logistics Airport.

One of the largest boneyards in Europe is Teruel Airport, located in Spain. Though some of the aircraft in residence at Teruel are not necessarily on the junk pile and are intended to once again fly, a good number of the relics here are the remains of defunct airlines from Russia and other countries throughout Europe. When the fleets are retired they get sent here because it’s much closer than sending them to any of the big boneyards in the USA.

Teruel isn’t just home to an airplane graveyard, either. They also test rocket engines here, as well as drones, and they do flight training. It’s not a commercial airport that you can fly into nor is it a military facility, but they are making strides to make sure that Teruel is important for any other aviation-related activities that are needed in Europe.

Because so many of the planes located in Teruel are there because they’re the leftovers from bankrupted airlines there’s a good chance that a lot of these could be picked up and reused further down the road. But it’s just as likely that many of them are going to be resting in this arid Spanish climate until they’re stripped down for parts and completely forgotten.

Air Salvage International used to be a military base in Gloucestershire in England. These days they run salvage operations and can strip down 60 massive aircraft at a time over the course of a year for recycling. Word is that they also had some interesting discoveries in their line of work as well, including several million dollars worth of cocaine shoved in an airplane toilet. How somebody forgot about that is anyone’s guess.

A graveyard in the truest sense, this is where these massive planes go to die and get stripped down to their base components. The crew running this operation can get nearly 2,000 usable parts from any given plane. An airplane engine alone could be worth upwards of £18 million. That works out to over $22 million in the US. Not too shabby for a scrap operation.

Because the job of the people who work at Air Salvage is to actually salvage these planes, their graveyard never really gets above that 60 plane mark. That’s because they’re going to be tearing them apart on a regular basis so for every one that comes in another one’s going out in pieces. They’ve been doing this for about two decades now and it sounds like it’s a fairly lucrative operation. While some graveyards get to be interesting reliquaries that invite aviation enthusiasts to come and take a look, Air Salvage International only keeps them around as long as they need to.

Not too far from Phoenix, Arizona, just a bit south of Interstate 10, you’ll find the Phoenix Goodyear airport and boneyard. The airport is still a world-class training facility where pilots from all around the world come to train, both from commercial and military backgrounds. The one-time desert-based Naval facility is now a place where you can find German Air Force pilots training alongside British Airways pilots.

Because the site has been used as both a military and a commercial airport and training facility over the years, and ownership of the aircraft has changed hands a few times, the result is that today there’s just an eclectic mix of planes sitting around. You can find China Southern 777s, Continental 737s, and even an Iberia Fleet Airbus A340 among many others.

Even though the associated airport is still in use, the boneyard itself isn’t actually open to the public. Of course, it doesn’t stop anyone from visiting the area and being able to get a good look since it’s all out in the open, where you can see it from nearby. Just don’t expect to get a guided tour through the facility.

Arizona is the place to be when you want to keep aircraft in good condition because the climate is perfect for preserving technology and metal. That’s why Arizona’s Kingman Airport is home to a substantial military aircraft graveyard situated on 4,145 acres of desert land. Unlike some boneyards, you can’t actually go and visit this one in person, at least not up close and personal. That said, because Route 66 runs right alongside the graveyard, if you’re an industrious sort who has a good zoom lens on your camera you can just park on the other side of the fence and snap off some photos if you’re into that sort of thing.

Kingman is home to several hundred aircraft, generally regional ones that haven’t been deemed necessary to ship to the larger Davis-Monthan Air Force Base, as well as a noteworthy collection of DC-8s. Kingman used to be a salvage yard and nearly 5,500 planes have been scrapped there over the years. When they were salvaging planes during the Second World War here, they would strip off every useful part and then smelt down the metal. The furnace is used to run 24 hours a day and they could get through 35 planes in that 24-hour period. Over $7.5 million worth of aluminum, steel and other materials were salvaged at Kingman back in the day.

Located near the Mojave Spaceport, the Mojave Desert aircraft graveyard is home to some massive airliners and has been building its collection since the 1970s. Whereas many of the larger aircraft boneyards are reserved for military aircraft, the Mojave facility has over 1,000 commercial aircraft on site mixed with a handful of military craft.

You can find a collection of turboprops and t-tails here as well as the much more massive 747s and DC-10s. Unfortunately, this is another one of the locations that doesn’t actually take you on guided tours through the facility but they will at least let you know where you can drive to get the best look from a distance at what they have available. Why aren’t you allowed in here? Well, the Mojave Air and Spaceport is still used by upwards of 60 different companies that have a vested interest in the aeronautics industry including Virgin Galactic, ASB Avionics, Orbital ATK, and the National Test Pilot School. It’s even the first facility in the US that was designed for horizontal launches of reusable spacecraft.

You can find aircraft from Boeing, Lockheed, McDonnell Douglas, Airbus and others along with planes from airlines that no longer exist anymore including Pan Am, Northwest and TWA in the boneyard.

In 2015 we got a glimpse of the Central Air Force Museum in Russia thanks to a flyby with a drone. The footage showed off a sizable collection of defunct Soviet-era aircraft that were all neatly lined up and in very impressive condition. There are over 170 planes at the museum, as well as over 120 engines that you can check out if you go for a visit.

Because it’s a museum, it is open to the public, although that is a fairly recent thing. Prior to 2001, it was closed entirely because there were actually experimental aircraft on site, and from 2001 through 2006 you needed to have special permits to visit. As of 2006, the site has been open to everyone. The planes at the museum detail Russia’s entire aviation history, going all the way back to the year 1909. 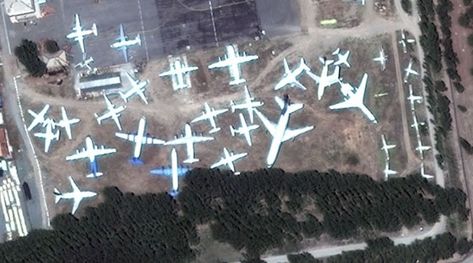 Located in Bishkek Kyrgyzstan, the Manas International Airport graveyard is home to some relics of the Soviet Air Force. After the collapse of the Soviet Union, a good 60 aircraft were transported to this graveyard, including prop planes and helicopters. Unfortunately, either because of the nature of the Soviet mystique or just because the Manas Airport administrators they’re not super big on tourism, this isn’t a place that you can actually visit.

If you do happen to fly into Manas Airport or have it as a stop on your way somewhere else, there’s always a chance you could grab a cab and drive by the graveyard but it’s not a place that you can tour.

Head to Tucson, Arizona to a place called the Davis-Monthan Air Force Base and you’ll discover the most massive aircraft boneyard on the face of the Earth. There are over 4,000 military aircraft and even ballistic missiles parked out in the desert here, just baking in the dry Arizona sun waiting for something to happen.

For decades now, the US military has been consolidating their old, unneeded aircraft at the Davis-Monthan Boneyard. There’s technology that stretches back to the Second World War parked on the gentle alkali sands. By 1946 there were over 600 B-29 Superfortress’ parked in this graveyard. And if you’re the kind of person who enjoys checking this out, they’re kind enough to give you a guided tour if you want to take the time to drive through the desert about 11-miles from the Tucson International Airport.

How did this become the go-to spot for thousands of planes? You can thank the annual rainfall of less than one foot and a relative humidity between 10 and 20%, which ensures that rust tends to stay away for a very long time.