No wonder so many children are terrified of Saint Nick. If any of these Santa Claus characters were part of my childhood I would be screaming and crying not to sit on his lap too. You may want to take your kids from the room before viewing this list of the Top 10 Most Unintentionally Scary Santas. It brings a whole new meaning to the words, “He knows when you are sleeping.” Chilling.

Wow, this little guy will haunt your dreams and push out any thoughts of sugar plums. He is small so he will fit into the duct work, wear he waits…for you. Photo by ilovecoffeeyesido

I can hear the music to the movie Halloween when I see this frightening visage. The sheer terror in the little girl rivals anything Jamie Lee Curtis could act out.

This imposing Santa is even scarier because of his Godzilla-like size. He could easily eat your child. Photo by leshville

And after he has eaten you, he poops you out. What really creeps me out about this defecating Santa is the pure evil poop-eating grin. Photo by Langston McEachern, uploaded by mikerosebery 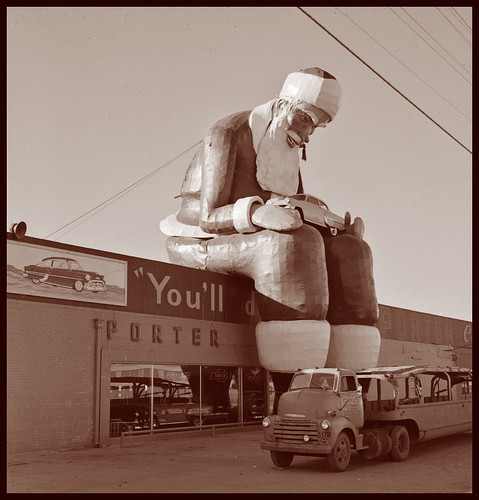 This Santa sits at the entrance of a building. I can see the sign below. “Lose Hope All Who Enter This Place of Evil”. Photo by jdtate101

5. Santa With His Sack…of Vengeance!

I can hear this Scary Santa saying, “Who has been a good boy this year? I’ll tell you who, no one! Now, into my sack of pain!” Photo by iluvmesomefreaks

4. Drunk Molester Santa Out For A Stroll

Awww, Santa looks so cute, bumbling around clumsily. Wait, he’s drunk and he is after me. Run while you still have your child-like innocence. Photo by Bryan Collins

3. “You’ve Been Naughty…Time to Die” Santa

This large, scary Santa is obviously angry about all the naughty boys and girls. He has the size and the attitude to make your Christmas a Christmas to dismember! Photo by wir-click-wir

2. Evil Asian Santa Who Had Too Much To Drink

This red-cheeked Santa is too drunk to care who he hurts. The only gift he is giving is the gift of life-long therapy. Photo by nailmaker

The most disturbing thing about this diminutive Santa reject, besides his freakish cone head, is his oddly splayed fingers. Almost as if the pinky was broken in some dwarf tossing related bar fight.

Hopefully, you can still have a Merry Christmas after viewing this collection of terrifying and scary Santas. Editor’s note. Thanks to a friend of mine, I now own this very scary Santa stuffed doll. Yay me! Photo by Konketsu

I made a music video and posted it on Youtube.com.