If you want to explore an incredibly creepy and bizarre location, Mexico’s Island of the Dolls is definitely the place to go. Located in the Xochimilco canals, approximately 28 kilometers south of Mexico City, the island is entirely full of dolls – thousands of them – hanging from trees and wires. From the sad legend of a young girl’s death, to the reclusive man who isolated himself on the island for fifty years, to the thousands of dolls hanging around the island, this place is extremely bizarre and frightening to say the least. This article will inform you about the very creepy, yet surprisingly popular, Island of the Dolls. You can visit NestingDolls.co to start your own collection of dolls.

The Legend of the Island and Don Julian

Legend has it that a young girl drowned under bizarre circumstances on the island many years ago. A man named Don Julian Santana Barrera found the girl’s floating body in the canal and later discovered her doll in the water, which he hung from a tree to show respect to the deceased child. He blamed himself for not being able to save her and the reclusive man moved alone to the island and became its caretaker. 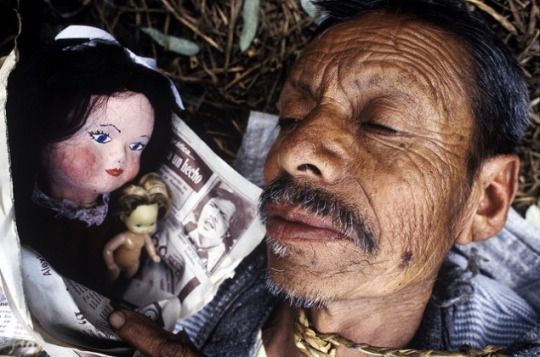 Island of the Dolls. This place is an uninhabited island in Xochimilco, Mexico.

He claimed to have heard footsteps and screams of a woman in the dark although his hut was situated deep in the woods and several miles away from civilization. He was also sure that the girl’s ghost was possessing the doll he found, so he started hanging many more dolls around the island in order to bring peace to her spirit. In fact, for fifty years, he decorated the entire island with hundreds of dolls – some that are even missing body parts.

He survived by growing vegetables and flowers that he sold in a nearby town but supposedly he didn’t speak to anybody. He lived a lonely life on the island until his mysterious death in 2001. As a matter of fact, his nephew found him dead in the exact same canal where he found the drowned girl’s body fifty years before.

Ever since Barrera’s death, his relatives now run the area, known as the “chinampas,” which has become a popular tourist attraction. Visitors even bring their own dolls to hang up – as if the island needed any more creepy dolls. They also leave coins and different types of trinkets at the doll shrines found on the island.

The easiest way to reach the island is to take a ferry there on one of the boat trips. After a two-hour boat ride through the maze-like canals surrounded by singing birds and beautiful scenery, the island appears after a bend and nearly takes your breath away (not in a good way) with the sight of countless creepy dolls hanging from the trees.

Visitors have reported hearing whispers, as well as feeling the dolls’ eyes following them while they explored the eerie island. And if it’s not bad enough that the frightening dolls are hanging from trees and wires, there are said to be many more that are concealed by the overgrown grass. 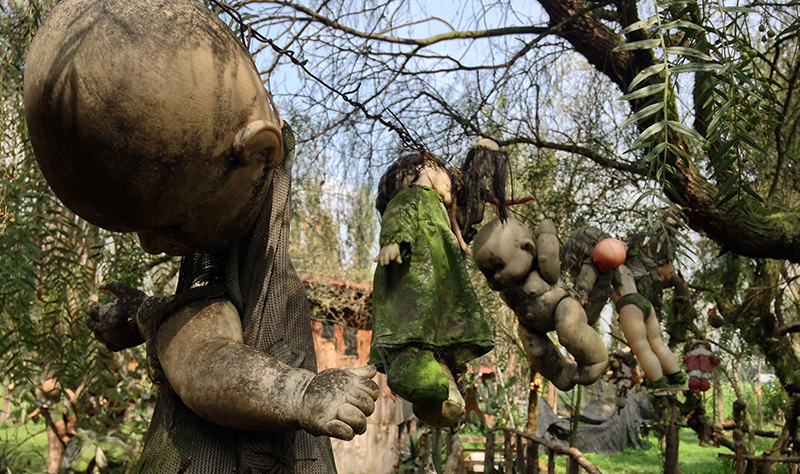 Without even mentioning the paranormal side of things, the sight alone of these dolls is beyond frightening, to say the least. While some dolls are missing limbs, others are without their entire bodies, so all you see is just a head hanging from the trees. Since many of the dolls have been on the island for numerous years, the continuous outdoor exposure has caused them to decay. In addition to that, some dolls have spider webs on them and lice in their hair, as well as insects crawling out of their mouths and eye sockets.

As for the paranormal aspect of the island, the dolls are supposedly extremely haunted, some say by the girl who drowned there. Reports have surfaced of the dolls moving their arms, heads, and even their entire bodies. They are also said to open their eyes, whisper to each other, and one of them has even been heard crying as if she had batteries (which the doll was found to have no batteries).

And the dolls are everywhere! Not only are they seen hanging from trees and wires, they can be found clustered at the bottom of trees and in the grass.

The island has even captured the attention of professional ghost hunters. In 2014, the Ghost Adventures crew investigated the disturbing location. While the crew was conducting interviews, a professor told them that during the Mexican Revolution in 1911, a lot of bodies were dumped in the Xochimilco canals. They also interviewed Don Julian’s nephew, who found his uncle’s body in the water.

During the investigation, the crew heard cans moving and then a fire mysteriously started in the fire pit where they just were moments before. Nobody else was on the island except for the crew and they were all together. Then they heard what sounded like two cats fighting when all of a sudden one of the dolls started laughing hysterically. After further investigation, they confirmed that no batteries were found inside of the laughing doll. 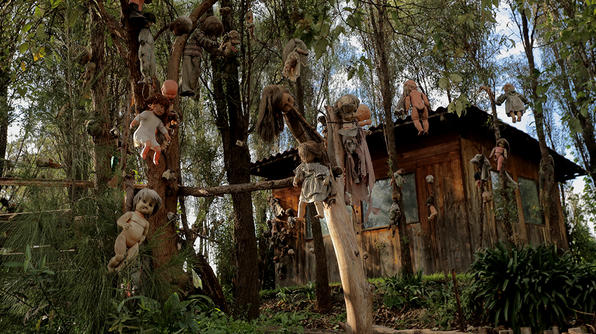 While locals describe the island as “charmed,” many others feel as if it is a deeply disturbing and bizarre location. One professional photographer even described the island as the creepiest place she has ever visited. Whether a person believes in the paranormal or not, the Island of the Dolls is definitely a unique place to visit. From the chilling history of the island, to the thousands of dolls who seemingly watching your every move, this is one place worth visiting.