It takes a lot more to be a successful music artist than it would seem, and part of the job is promoting yourself and your music. Some artists have gone to the most ridiculous lengths to get attention, and these are some of the most wild.

8. Pearl Jam Had People Point Their Phones At The Moon

Musicians have been fascinated with the moon for years. One band, however, didn’t just want to write a song about the moon, they wanted to use the great celestial body as a promotional tool to sell that song. The band in question was Pearl Jam. To show off their song “Superblood Wolfmoon,” the band partnered with Powster, a studio that’s created websites for major movies and has an app that created cartoon effects on photos.

To hear the sneak preview, you had to download Powster’s app on your phone, wait for night to fall, and then walk outside to a clear spot, open the app, and aim your phone’s camera at the moon. If it works, then animations will start up and the song will play for you as you stand alone in a moonlit field in the middle of the night, and confused wild animals attracted by the noise wonder how we ever became the apex predator.

Oh, and if it was a cloudy night, well, that’s just tough. 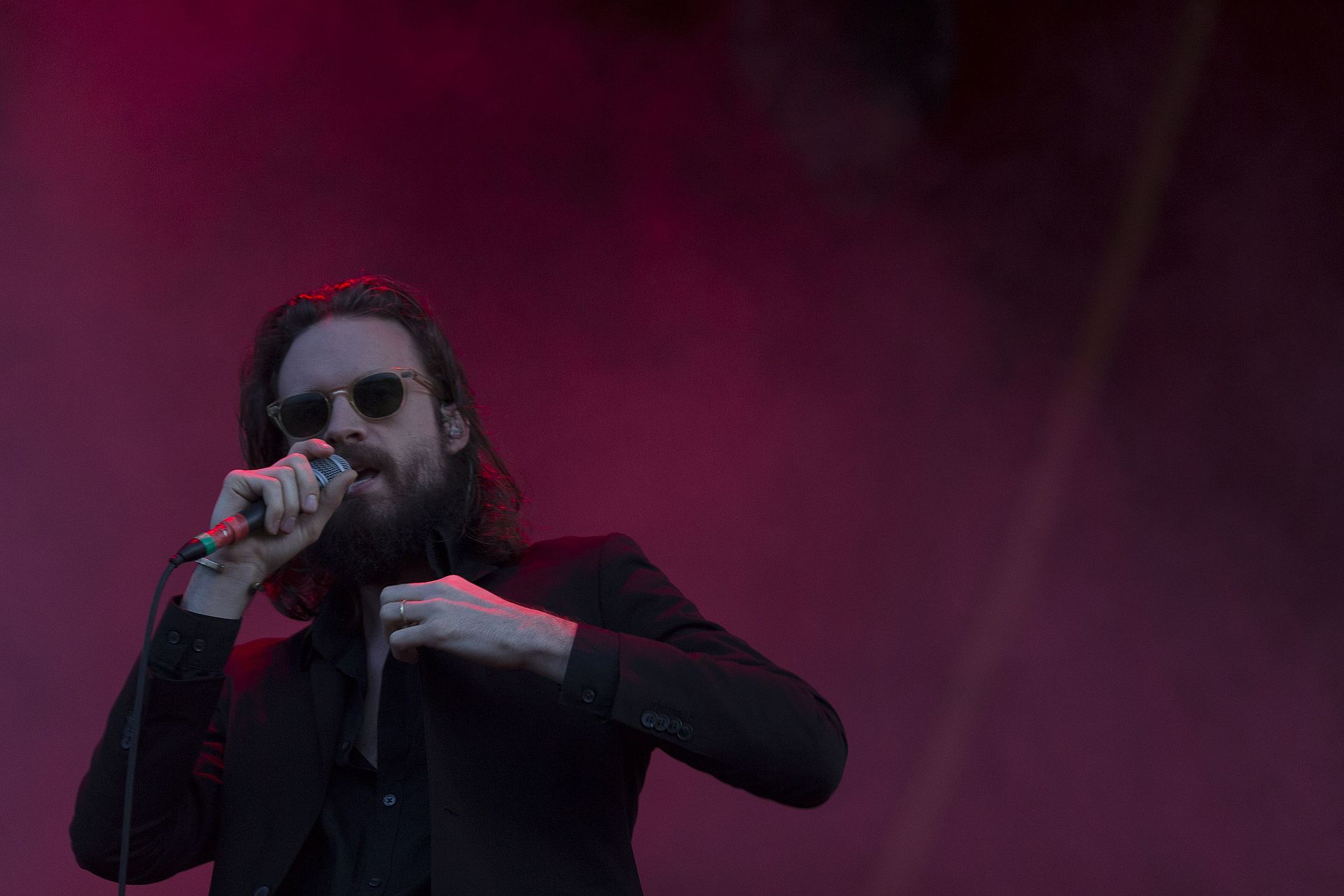 If you’re an artist in need of some promotion, why not show your cred the easy way and take a hilarious swipe at a giant corporation? As a lot of musicians have proven, it’s a tried and true method, but it does still need a degree of originality.

Take electro-rockers Tanlines, who constructed an entire faux-Netflix website to show off their album Highlights. Not only did the duo create convincing movie posters for each of the tracks on their album (starring themselves, naturally), they also made playlists of real movies, some to symbolize their tour schedule and some to just make jokes. Charitably, Netflix have somehow let the site stand, and you can still visit it today. Or if you want a more petty version, indie rock gods Arcade Fire released a review of their then-new album Everything Now on a site called “Stereoyum,” a playful jab at music site Stereogum. Obviously written by the band, the review was dismissive of the record, in a preemptive shot at the critics who were all too ready to compare it to their earlier works.

The most audacious stunt of this kind though, has to have been the one singer-songwriter Josh Tillman, aka Father John Misty pulled. Just before the release of his breakout album I Love You, Honeybear, he dropped a preorder using his own unique audio service, Streamline Audio Protocol, or SAP. It made the songs sound completely wrenched of personality and made a very striking point about Spotify and music streaming services in general.

What really made it spicy, however, was the show Tillman was playing the day it went live: a couple of songs with a karaoke machine at Spotify headquarters.

Josh Freese is one of the many people quietly making music great, even if he’s not well known. Starting his career as a 12-year-old drummer in the Disneyland band, he’s made hundreds of records and been a member of bands like Nine Inch Nails, Guns N’ Roses, and Devo. Still, a sideman like Josh needs a stage of his own sometimes, so he has embarked on solo projects, even if they have as much impact “as a tree falling in the woods,” according to him. However, one would make a much louder crash than he expected.

To promote his second solo album, Since 1972, Freese decided to throw in some unique offerings. Depending on what someone paid for the record ($7 to a whopping $75,000!), they could receive anything from a gradually insane list of packages that Freese vowed to fulfill personally. For example, one fan shelled out $20,000 and got to go with Freese on various adventures, like miniature golfing with Maynard James Keenan of Tool, having a pizza party with Mark Mothersbaugh of Devo, floating in a sensory deprivation tank, touring and staying aboard the Queen Mary for a night, and finally joining Freese in the studio to record two songs specifically about him, among other things.

As crazed as it all sounds, it turns out Freese was actually a visionary. Since 1972 dropped in March of 2009 and barely a month later, Kickstarter debuted on the Internet, allowing people to finance creative projects in exchange for special rewards, just like Freese did. It’s unclear if Freese regrets this missed business opportunity, but he was probably called away by another rock star in need before he had time to reflect.

The enigmatic musician Poppy has had a very storied career, going from an apparently unstable YouTuber to a pop-metal mashup queen in a short few years. Poppy, however, harbored other aspirations besides music, and expanded into a variety of related mediums like graphic novels and films. Unlike most musicians who similarly diversify though, Poppy also went for a more befitting, if terrifyingly unique, venture: becoming a religious leader.

In 2018, as Poppy was making her metallic transformation, she put up a new website called Poppy.church, which appeared to be a social media platform run by a cult, or as Poppy put it, “a collection of passionate individuals.” Fans who had previously submitted their phone number would enter after making an avatar, signing their name in “blood,” and witnessing a strange “prayer” led by Poppy. Inside, users could chat with one another, buy tickets to Poppy’s upcoming tour, and other activities. Your profile would also have measurements for “faith,” “devotion,” and “loyalty,” and the site would inform you that your actions were being monitored.

The YouTuber Repzilla did a walkthrough of the site to see whether or not it was a cult simulation, as some who saw the site claimed, and whether this was meant to be educational, or if Poppy genuinely wanted that sort of following.

The site was eventually closed down, and Poppy has continued on with her career after a vitriolic breakup with her former collaborator Titanic Sinclair, which makes the whole Poppy.church experiment seem more like a warning. From February to April 2007, Nine Inch Nails fans started discovering several strange clues during the band’s European tour, and others that were hidden in Nine Inch Nails’ various releases. What they couldn’t have guessed on finding them was just how deep a rabbit hole they would be pulled into: a spiraling alternate reality game they had to piece together.

The first major discoveries occurred when fans in need of a piss stumbled onto mysterious USB flash drives, which contained songs from the then upcoming Year Zero album. Once those were found, they were immediately passed around the Internet, which drove the Recording Industry Association of America nuts. Meanwhile, other fans who had bought NIN tour merchandise and releases started finding hidden phone numbers and URLs that led to chilling websites, depictions of what Nine Inch Nails leader Trent Reznor believed to be the United States’ future under George W. Bush. Indeed, some of them were almost prophetic, with references to chemicals leaking into water supplies, a movement called “Art Is Resistance,” and one website that showed a beautiful farmland with the slogan “America Is Born Again,” only to disappear when clicked on and dragged to show complete destruction.

Despite the ties to Year Zero, Reznor did not consider the game a mere marketing stunt, but rather an extension of the album that augmented a fan’s experiences. “Essentially, I wrote the soundtrack to a movie that doesn’t exist,” he said.

3. Bjork’s Biophilia Album Was a Series of Trippy Apps

Through a 40 year career, Bjork has been walking so people like Lady Gaga could run wild. But then came 2011’s Biophilia, and it seemed the Icelandic musician had leapt into a world unseen since the end of 2001: A Space Odyssey.

Kicked off with a narration by the master of animal commentary David Attenborough, the songs were presented alongside accompanying graphic animations that you could play with. As listeners toyed with the app, some songs like “Moon” could be changed in different ways while the music was still playing, as a befuddled Stephen Colbert demonstrated on The Colbert Report. Other songs like “Virus” and “Dark Matter” would stop and force the user to win minigames to keep hearing the album. Despite the twisted, acid-drenched appearance, the animations were somehow still scientifically accurate and educational.

While the album was a reasonable commercial success, it did also earn a place in art history when Biophilia became the first app to join the Museum of Modern Art’s collection in 2014. It could also play a role in education in the future, as Iceland and Bjork started the Biophilia Educational Project to teach students of all ages and levels the lessons contained in the album. The Japanese idol girl group AKB48 debuted with a novel concept: create female stars that the public could watch perform any time they wanted. To this end, they kicked off with a mind-boggling 48 members that were cycled around various events in Japan, so no fan would miss out.

But fourteen years later with an active roster of over 100 members (and that’s not counting the spin off groups in other countries), not everyone can get in the spotlight, and often the top spots in the group are determined by a member’s popularity. Therefore, they decided to settle this with the fairest method ever developed by man: rock-paper-scissors. In 2010, the producers behind the group instituted an annual single elimination rock paper scissors tournament that every girl in AKB48 can participate in. The last girl standing gets a solo debut or a solo concert.

As silly as the idea sounds, the janken tournaments are serious business, because it can get one of AKB48’s girls a massive boost of exposure, which will make them more popular and help their careers. Accordingly, the event is as must-see for AKB48 fans as the concerts themselves, with sold out arenas, members wearing cosplay outfits, and a massive emotional rush when the ultimate winner is victorious. The 2017 tournament, which saw the victory of the relatively unknown member Miku Tanabe, was so moving it made international news.

1. U2 “Gift” An Entire Album On To Everyone’s iTunes Library U2 have always been pretty audacious, whether you’re someone who loves them for it or thinks they’re pretentious goofballs who fancy themselves humanitarians. However, their biggest shark jump wouldn’t come until Apple bought their soon to be released Songs of Innocence album in 2014 for about $100 million.

It made sense at the time because U2 and Apple have always had a pretty cozy relationship, from Steve Jobs and Bono being friends to U2 helping promote the iPod’s release with a collaborative commercial and their own signature iPod. But there would be no friendly backslapping or even profit after this deal went down.

When 500 million people with an iTunes account discovered Songs of Innocence in their libraries, U2 and Apple quickly found out that they might as well have given away gonorrhea-infected crap piles. The album wasn’t well received by critics, and U2 was not exactly a huge name to a generation that almost exclusively consumed music digitally, to say nothing of the invasion of privacy issues. Users denounced both the band and Apple for foisting the album on them, and “How to remove U2 from iPhone” became a top Google search within minutes, to the point Apple had to set up a site for customers to do just that.