Keeping soldiers healthy on the field of battle is a monumental task that few people ever fully appreciate. Preparing and transporting food, keeping supply lines open, making it portable and edible in the worst of conditions is almost impossible. Throughout the history of warfare, it has not been easy. But the military does try. Sometimes the rations end up being surprisingly good. Other times, things get a little weird. Once upon a time, it was standard practice for soldiers to not just have a meal in their rations but a drink to go with it. Known as spirit rations, this could be anything from rum to brandy to wine depending on what military was providing it. Sailors in the Royal Navy got a rum ration as late as 1970. Canadians kept it until 1972. The New Zealand Navy was dedicated to the ration and kept it on hand until 1990.

The ration, dating all the way back to 1850, was an eighth of a pint of 95.5 proof rum. If you were an officer, you got it straight up. Otherwise you got it diluted in some grog. Prior to this, back before the Napoleonic Wars, sailors got a gallon of beer a day.

It wasn’t just sailors who got a spirit ration, either. Several Italian ration kits include spirit rations, and these were made in the 2000s. Along with food, most rations will usually include some support items. Toilet paper, utensils, and hand wipes have been included in many. And back in the day, a meal kit was not considered complete unless it had a pack of cigarettes included as well.

During World War Two, nine different brands of cigarettes could be included in American C-Rations. It was believed tobacco was a key part of keeping up troop morale. They weren’t phased out until after the Vietnam War.

Smoking was heavily promoted by the tobacco companies as vital for the good of the military. One ad described smoking as “the last and only solace of the wounded.” Word is that General Pershing, commander of the American Expeditionary Forces on the Western Front in World War I, said cigarettes were more important to American soldiers than bullets. Everyone loves M&Ms, and for good reason. Delicious chocolate in a crunchy candy coating is a winning formula. The military felt this way too, which is why during WWII M&Ms were exclusively available to the military. They were included in rations so soldiers could have easy access to chocolate, a quick source of carbohydrates and energy, out in the field.

M&Ms are easy to transport and, unlike most chocolate, can stand up to heat. Ironically, the candy was inspired by military rations in the first place. Forrest Mars Sr. had seen British soldiers during the Spanish Civil War eating little candy-coated chocolates. He ran with the idea and produced his own version in 1941.

Sometimes known as corned beef, bully beef was a staple ration for many soldiers during the first world war, although it was supplied as far back as the Boer War and was around for WWII and was not removed from British rations until 2009.

Corned beef can be purchased at stores today, so in theory it doesn’t sound bad. However, wartime corned beef and Piggly Wiggly corned beef are vastly different foods. Soldiers ate bully beef, so named because of the French word “bouilli” meaning boiled, because they had to. Along with hardtack, it was the only food they could get in regular supply.

Bully beef came in various sizes, including some large seven pound cans. Often it had to be eaten cold, served up as a thick, cold, greasy substance because there was simply no wait to heat it. For many soldiers it was eat bully beef or starve. Lieutenant W. S. Dane described it as “a tramway accident for meat.” Other soldiers tried to feed it to stray dogs that turned their nose up at it. Rumors, mostly playful, circulated that it was actually human meat.

Served with water and maybe crackers, it could be made into a more palatable stew if fire was an option. But details from the war indicate it would be abandoned at the drop of a hat if there was even a chance of eating anything else. Stories exist of soldiers using full tins of meat to make the floors and walls of their trenches rather than eating it. 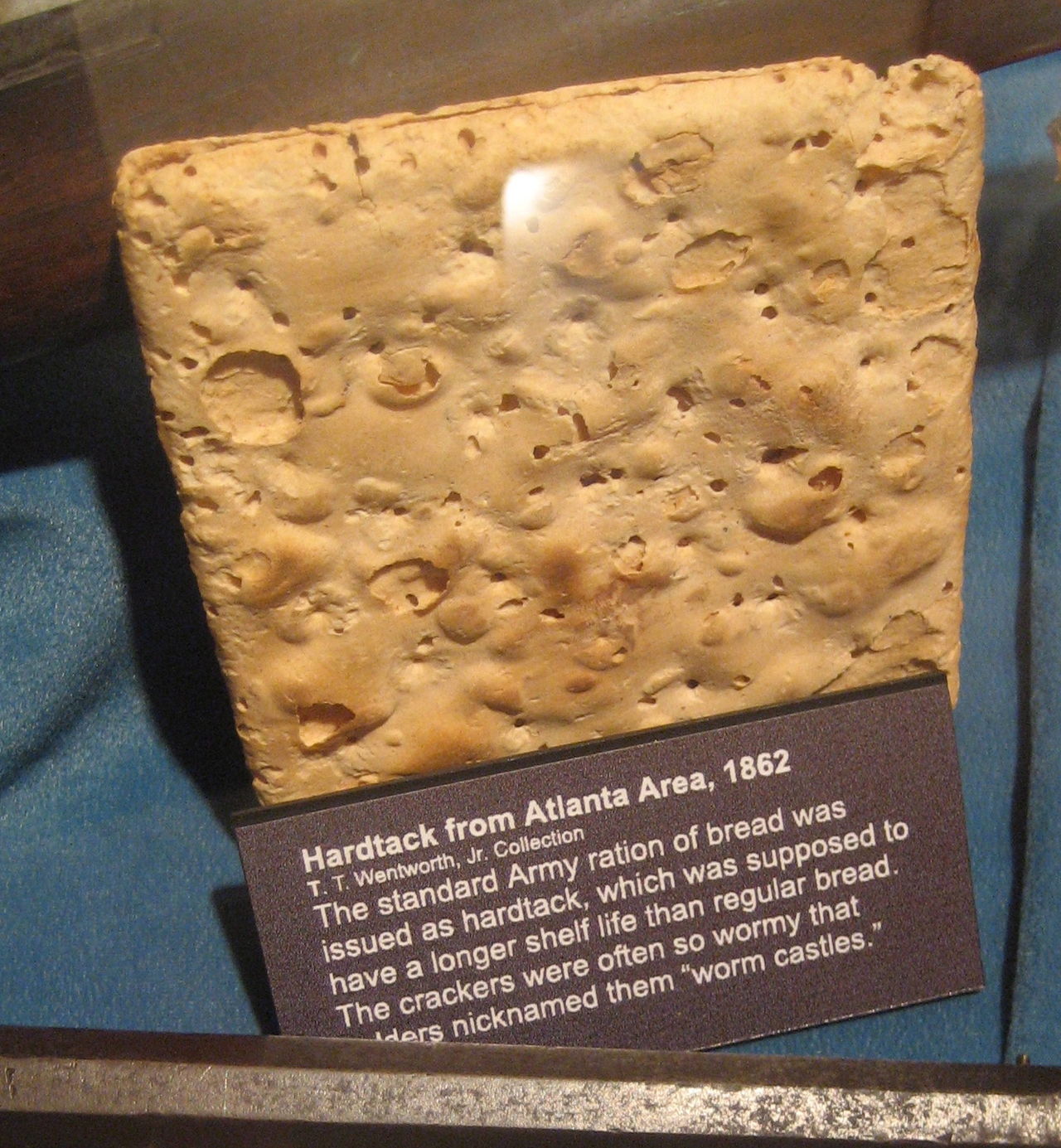 The other staple of the military rations for Americans and other Western forces in WWI and beyond was a kind of hardtack cracker that some called dog biscuits. Essentially just flour, the crackers had an incredibly long shelf life but were known to be almost rock hard. They had first seen use in American rations all the way back in the Civil War.

Soldiers would soak them in water or milk to make them edible. They could also be ground up and cooked with bully beef or dried vegetables to thicken a stew. It was arguably possible to make them tasty, if a clever cook with some reasonable supplies was around.

Without softening, the crackers could be a health hazard. Soldiers with bad teeth simply could now chew them. A soldier named Private Pressey wrote home about how he had tried to break one against a wall and ended up hurting his hand.

Despite the bland taste and iron-like qualities of the biscuits, the flour provided much needed carbohydrates in a very lightweight, portable package. A strong argument could be made that soldiers simply would not have survived at all without the calories provided, even if they were unpleasant and hard to ingest. Getting a hot meal during the war was a much sought-after luxury. Soup was typically the easiest and best choice for this. It was a good way to re-hydrate dried vegetables and make canned meat somewhat palatable. There were also times when soldiers actually had access to cooks who could more or less cook food. The end result was sometimes suspect.

In 1916, supplies were almost impossible to come by. Soldiers had to rely on what they could find around the trenches in France, and that meant adapting to local ingredients. With no access to flour, dried and ground turnips were used to make bread. Peas were plentiful, so pea soup became one of the staples of a soldier’s diet. But they didn’t exactly have ham.

In order for a boost of protein and fat, horse meat would occasionally be added to the soup. Likely not the first choice of any soldier in the field, it was probably better than rat which was rumored to have made its way into more than one stew. The idea that Nutella, the chocolate hazelnut spread that is essentially just cake frosting, would be included in an MRE is not so unusual. Most military rations try to include something sweet and portable, and peanut butter and jam have been included in rations for generations. But how Nutella got into rations in Denmark is one of the more bizarre stories in ration history.

Back in the 1990s, Jacob Haugaard was elected to office in Denmark. He’d been running for office unsuccessfully for 15 years at that point. Part of the reason for this was because he represented the independent Union of Conscientiously Work-Shy Elements. Haugaard was a comedian. His runs were never fully serious to begin with. And one of his campaign promises was to get Nutella included in Danish military rations.

Haugaard never planned to win, but when he did, he stuck to his guns. He got Nutella included in rations. Canned asparagus is generally unpleasant. Even fresh asparagus is an acquired taste for many people. Still, vegetables in military rations have almost never been praised, but they try to include them for valuable vitamins and nutrients. The inclusion of asparagus isn’t weird at first until you find out why it may have been included.

Word is that the UK included asparagus in rations for pilots flying over the South Pacific. The reason for this allegedly goes beyond the essential vitamins in the vegetable. Asparagus is notorious for its ability to alter the smell of urine. Asparagus contains something called S-methylthioacrylate and S-methyl-3-(methylthio)thiopropionate. That long chemical name is the source of the smell in urine after asparagus is eaten.

In terms of pilots, this smelly chemical could have potential life saving qualities. Fish are attracted to sulfur compounds and the story here is that if a pilot were shot down but survived, they could eat the asparagus and then pee into the ocean or a river. The compound in their urine would attract fish and make it easier to catch them.

It’s hard to track down much evidence that asparagus was actually included in rations for pilots or if this was the actual reason, but the science of it actually stands up to scrutiny, at least on paper. The story can be found in print at least as far back as 1957.

Because of the way supply lines have always worked, fresh food is almost never an option for soldiers. Things like crackers and meat can be much more easily preserved than fruits or vegetables. Often, the only way to include fruits and vegetables in a meal was to dry them out. That made them much more portable and long lasting. Unfortunately, it also made them awful.

The Civil War introduced desiccated vegetables to soldiers, who quickly renamed them desecrated vegetables. String beans, turnips, onions, carrots and beets were compressed into dry bricks, one inch thick by one foot long. The taste was apparently so horrible that many soldiers refused to eat them unless there was literally no other choice.

Sergeant Cyrus Boyd’s of the 15th Iowa wrote of desiccated vegetables that they made him “the sickest of my life.” Soldiers had to eat them if they wanted to avoid scurvy and chronic diarrhea, both of which were rampant. The Union Army suffered 1.6 million cases of diarrhea, and nearly 11,000 soldiers died from it.

It’s not hard to imagine how awful some of the old military rations must have been when you hear what they included. But modern rations have tried to improve on the old in a variety of ways. You can pick up MREs, meals, ready-to-eat at army surplus stores or online and experience for yourself what soldiers from various world militaries get to eat in the field. There’s a booming YouTube industry of people open, eating, and critiquing the cuisine.

Gone are the days of bully beef and hardtack and now you can enjoy chicken fajitas, scalloped potatoes with ham, beef stew and some fancier sounding dishes that look appetizing and, if reviews are to be believed, are not just tolerable but tasty.

In an effort to advance military rations above and beyond the normal, the US military took a bold step back in 2018 when they introduced the pizza ration.

Obviously pizza is a huge staple of American diets. The average American will eat 6,000 slices of pizza in their lifetime. Soldiers had requested the dish in MREs for years but there were some major setbacks to producing it. Namely, if an MRE has to have a three-year shelf life without refrigeration, how do you make a three-year pizza? Well, they did it.

The science behind the pizza is staggering and, in all honesty, does not sound appetizing. But reviews of the pizza were generally positive. It’s not beating out a slice from your favorite local pizza place by a long shot, but considering this is a meal meant to be enjoyed potentially while enemy combatants are trying to shoot you, it was not bad.