Volcanoes are notorious features on the landscape, but the mountains of Earth’s surface do not claim all of the volcanological action in the world. Concealed below the waves, underwater volcanoes mean that earth, fire and water can explode into a fury at any time in certain places, sometimes with fascinating results. Today, we’ll look at the most fascinating underwater volcanoes worldwide. While scarce, video footage has been included where available.

The beautiful azure waters of the Caribbean Sea hide some volcanic activity so dangerous that parts of the sea are off limits to explorers. The notorious aquatic volcano Kick ‘Em, Jenny, several miles offshore of Grenada, is 4,266 feet from the ocean floor at its summit, which is fully submerged. The summit is approximately 656 feet below sea level. The volcano erupted 14 recorded times following its 1939 discovery. Exclusion zones keep boats and swimmers away to protect anyone from being boiled or blasted in case of eruption. Kick ‘Em, Jenny is the Eastern Caribbean Sea’s sole active submarine volcano.

The volcano lies on the edge of a steep drop-off, with part of the volcanic cone creating a wall-like boundary in the ocean floor’s topography. A crater in the top of the volcano adds to its appearance. The above video with submarine footage highlights the seemingly incongruous juxtaposition of molten rock and seawater that defines Kick ‘Em, Jenny, with illustrations and a discussion by Dr. Steve Carey. The name Kick ‘Em, Jenny refers to the commonly used name for a mule, notorious for kicking just like the temperamental volcano.

Residents of Mayotte, a French island territory located in the waters separating the island nation of Madagascar with Mozambique, a country on the African continent heard a strange hum, which was recorded in 2018. After, a scientific discovery was made in the form of the largest underwater volcanic eruption ever recorded. The blast was so powerful that the island of Mayotte actually moved and sunk several inches.

The underwater volcano is gigantic at half a mile in rise from the ocean floor and 3.1 miles long, located 31 miles off the coast of Mayotte. This all happened in just six months. The event should shake public complacency about volcanos, as it was underwater and also in an area that had been free of volcanic activity for 4,000 years. Small earthquakes were felt on a nearly daily basis by island residents, prior to the documentation of the cryptic yet massive volcanic event near Mayotte as the largest underwater volcanic eruption in history.

6. The Deepest Volcanic Eruptions on Earth Close to Samoa, Fiji and Tonga, a huge volcano stands on the ocean floor. In fact, this volcano is both enormous and active. Towering one mile in height above the surrounding ocean floor, the West Mata Volcano, nicknamed the “underwater Fourth of July” by scientists observing the eruption, which was recently captured on film. It might be a good thing that the volcano is underwater, for its lava is some of the hottest on the planet in the modern geological era.

Not only is this undersea volcano gigantic and hot, the area of eruption is also huge. Despite the great height of the volcano, it’s base is so deep that the mountaintop eruption is still a record holder as the deepest volcano ever to be recorded by researchers. In 2009, a series of spectacular images and videos were captured showing the formation of the boninite lava deposits, which offers researchers a fascinating glimpse of the way crust rock is recycled upon collision of tectonic plates. Not only were the explosive sounds of the eruptions recorded by hydrophone, images also showed extremophile species such as shrimp staying alive close to the volcanic activity.

The Hawaiian Islands are infamous for their volcanic origin and offer tourists a glimpse of earth, air, water and fire interacting in spectacular coastal volcanic eruptions. Loihi Seamount stands out as an underwater volcanic feature of particular scientific interest in the Hawaiian Island chain. The volcano is 22 miles away from the island of Hawaii, and has its summit 3,000 feet below the waves. Loihi Seamount itself is on the side of Mauna Loa, the world’s largest shield volcano.

This underwater volcano may seem novel, but it is by no means new, for its formation started approximately 400,000 years in the past. With its history of growth, Loihi Seamount is not expected to remain an underwater volcano. This youngest volcano in the Hawaiian-Emperor Seamount chain is has a projected time of breaking the surface of the ocean between 10,000 and 100,000 years in the future. The current summit is 10,000 feet higher than the ocean floor, making the huge volcano larger than Mount St. Helens was prior to the 1980 erruption. This volcano is the sole volcano in Hawaii that is in the “deep submarine preshield” development phase. Earthquake activity has been significant, with 4,070 occurring in summer 1996 alone, the most recent year of eruption.

Alaska may be a land that is often frozen and the last place that comes to mind as far as volcanoes are considered. In 2013, a dormant volcano that had not gone off for around 10,000 years was discovered in Southeast Alaska. This volcano was close to the surface, just 150 feet below the waves. Two years afterward, another volcano was found, but this one was active.

It is rare to be able to study an underwater volcanic eruption live, but Oregon’s coast offers scientists a valuable glimpse into lesser known aspects of geology. The Axial Seamount is an active volcano located around 300 miles off the Oregon coast, alternatively called the Coaxial Seamount and Axial Volcano. Due to the sudden cooling effect of the ocean water, the lava at the Axial Seamount eruption site formed strange structures that are comparable to a pillow in shape, with a glassy composition.

The seamount is ground zero for eruption activity in the Cobb-Eickelberg Seamount Chain, as well as being the youngest of the volcanos in the chain. Rising 3,609 feet above the sea floor, the volcano has erupted multiple times in recent years. Due to the simple structure of the volcano and resulting regularity of the volcano’s activity, the Axial Seamount has been studied in depth. The 1998 eruption was followed by a 2011 eruption that spewed a lava flow one mile across the seafloor, while 2015 ushered in another round of activity. 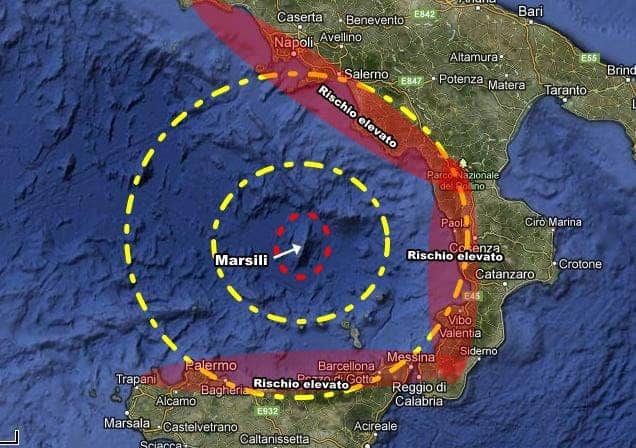 The Mediterranean region may not be remote, yet it holds its secrets, and those could prove to be very dangerous thanks to the dangers posed by extreme underwater volcanic activity. The largest underwater volcano in Europe, Marsili Volcano, is 43.5 miles in length, 18.6 miles in width, and lies 1,476 feet below the surface of the Tyrrhenian Sea. The volcano poses a threat not only through the risk of magma release, but for rather novel geological reasons that also present the risk of a post-volcanic activity tsunami to Italy.

Italy’s National Institute for Geophysics and Volcanology indicated that the Marsili Volcano is unstable and is at risk of a wall collapse. Such a disastrous event could prove catastrophic due to the release of magma in quantities that would be measured in the thousands of tons. The magma release would trigger a shocking event: a tsunami in the Mediterranean region, which would involve the Tyrrhenian Sea engulfing parts of Sicily, Calabria and Campania. Despite the risk, the volcano remains a little known potential natural disaster in the making.

Off the coast of Vancouver Island, British Columbia, Canada — which is the largest island on the west coast of North America — is Canada’s largest underwater volcano. Located off Northern Vancouver Island is the Explorer Seamount. The submerged mountain is quite large, covering 772 square miles, the size of the volcano is greater than the city of Vancouver.

The volcano rises 8,202 feet above the ocean floor, at a spot where the summit is still 2,723 feet below the surface. The tectonic plate activity of the volcano site is significant, being a tectonic spreading centre. This location marks the boundary of the Pacific plate and the Explorer plate. The volcano is part of the Explorer Ridge, and was named after the ship Explorer, which was a Coast and Geodetic Survey Vessel which operated in the North Pacific and Gulf of Alaska between 1940 and 1943. Researchers have flocked to the site. A four-hour dive followed by a two week expedition to the Explorer Seamount revealed a great wealth of biological activity, with sponges being described as something akin to an undersea rainforest flourishing on the huge hidden mountain.