If there is one constant throughout history, it’s that humans love to develop new and terrifying ways to murder their enemies or subjugate their own citizens. Chemical weapons are particularly terrifying, as they can be colorless, odorless, and can easily be introduced to a water or food supply with devastating results.

From deadly nerve agents, heart stopping poisons, to industrial chemicals turned into potent weapons, here are ten of the most deadly chemical weapons.

Most of us know of cyanide thanks to its representation in Hollywood spy films, where enemy agents typically swallow a pill in order to avoid being interrogated by the good guys. But did you know it was first used as a chemical weapon by France in World War I?

Hydrogen cyanide is not considered to be particularly deadly due to its instability and the fact that it can be detoxified in the human body with relative ease, and no deaths have ever been recorded from its use as a chemical weapon. It was dubbed “militaristically useless” shortly after World War I, but its effects can still be particularly deadly. In order for it to be effective as a chemical weapon, it needs to be used in high quantities, but it can also enter the water systems as a contaminant.

As a liquid it is usually pale blue or colorless, with a slight almond odor, and as a gas, it’s usually colorless with a penetrating smell.

Though, unlike most of the other chemical weapons on this list, cyanide has a lot of industrial and pharmaceutical uses (such as in pesticides, fumigants, dyes, drugs, and plastics), and it’s even been seen occurring naturally in Titan’s atmosphere (as if the Saturnian system moon couldn’t get any cooler).

VX gas is one of the deadliest of the nerve agents, and is completely odorless and tasteless. It was created in 1952, by British scientists. Britain traded information on the new chemical weapon in exchange for information on the production of nuclear bombs, even though they publicly renounced the use of chemical and biological weapons in 1956.

By 1961 the US began large scale production of VX, along with the Soviet Union, France, and Syria. With the signing of the CWC in 1993, the United States and Russia vowed to destroy their supplies of chemical weapons, hoping to finish by 2012.

Exposure to large doses of VX causes convulsions, loss of consciousness, paralysis, and respiratory failure which can lead to death. Survival is highly unlikely if exposed to a large dose of VX. Chlorine is used in many places in the developed world, from swimming pools to small amounts being used to keep public water supplies clean and free of bacteria. But it has also been used as a deadly chemical weapon, which appears as a greenish-yellow gas featuring a sharp smell that chokes the lungs. If you’ve ever encountered a pool that has been freshly treated with chlorine, you can probably imagine the intense aroma of chemicals that such a gas might produce.

The chemical is far too reactive to occur naturally, and even if a victim is exposed to small levels of the stuff, it can cause permanent lung damage. Inhaling weapons grade chlorine can lead to fluid buildup in the lungs, which is never a good thing.

Fitz Haber (1868-1934) was fully aware of chlorine’s potential as a weapon, and used it in 1915, launching canisters of weaponized chlorine on Allied trenches. Clouds of chlorine gas fell upon the Allies, killing 5000 of the 15,000 soldiers on the battlefield that day. Its primary use was destroying the foliage the Viet Cong were using to conduct gorilla warfare operations against US forces, but the US Military also hoped that it would contaminate and destroy their crops, effectively wiping out their food supply.

The aftereffects of being exposed to Agent Orange have been linked (unofficially) to the development of cancers, birth defects, and abnormally high rates of miscarriages. Both the Viet Cong and US forces experienced these health issues.

In 1979, US veterans filed a class-action lawsuit against 7 companies responsible for the production of herbicides for the US military. Despite the difficulty in proving that their health problems were directly caused by exposure to Agent Orange, a settlement in the amount of $180 million was reached in order to compensate the 250,000 affected by exposure to the chemical weapon.

The gas so deadly even Hitler was too afraid to use it, Sarin is a particularly lethal nerve agent, the most toxic variety of chemical weapons. Nerve agents share an uncomfortable kinship with pesticides, and fun fact, Sarin was originally developed as a pesticide by the Germans in WWII to combat weevles which were infesting Germany’s orchards and fields.

Sarin is a combination of isopropyl alcohol and a compound called methylphosphonic difluoride. It’s highly corrosive, and appears as a clear, colorless, odorless, and tasteless liquid, unless it evaporates and seeps into the environment.

Releasing the deadly chemical into the air is the main way in which it’s been used in the past, but its potential for being mixed into a water supply, food, and clothing (after exposure to Sarin vapor) are all equally terrifying.

Though victims exposed to lower doses are likely to make a full recovery, it is highly unlikely that those exposed to higher quantities of the nerve agent are to survive. Sarin is classified as a Schedule One substance by the Chemical Weapons Convention, meaning that it has zero application outside of being used as a weapon.

In the industrial world, phosgene is a major component of plastics and pesticides, but during World War I, it was used to kill more than 85,000 people. It’s created by combining carbon monoxide and chlorine using a catalyst, and in very small amounts its odor is reminiscent of fresh hay or grass.

Exposure to large quantities of phosgene leads to coughing, blurred vision, burning sensations in the throat and eyes, nausea, vomiting, and lesions very similar to frostbite or burns.

It can also lead to fluid buildup in the lungs, and even after the effects have worn off can lead to other, more severe symptoms, like difficulty breathing, low blood pressure, coughing up a viscous white-pink fluid, and even heart failure.

Believe it or not, though, the CDC says that even people exposed to high doses of phosgene are likely to make a full recovery, unlike some nerve agents we’ve covered, but make no mistake about its lethality as a poison. Phosgene is deadly.

Novichok agents are far worse than VX, or Sarin, replacing them as the deadliest nerve agent.

Developed in Soviet Russia in the ’70s and ’80s under the code name Foliant, Novichok (meaning new comer in Russian) has very similar symptoms as other types of nerve agents like Sarin and VX, but the fourth generation nerve gas is much harder to detect. It’s thought that the Soviets developed Novichok in order to get around international sanctions against the use of chemical weapons, but thanks to the scientist who created it, Dr. Vil Mirzayanov, defecting to the US and publishing the formula in his book, State Secrets, the soviets were exposed.

Most recently, prominent critic of Russian President Vladimir Putin, Alexei Navalny, was thought to have been exposed to Novichok in 2018, when he was airlifted to Berlin for treatment after falling ill during a flight in Russia’s Siberia region. Putin’s administration denied involvement with Navalny’s illness. Navalny fell into a coma and only recently came out of it. It’s still believed that he was exposed to Novichok. First used in World War I as a means to incapacitate the enemy, Mustard gas can cause large blisters to form on the skin and in the lungs of victims exposed to it. Though, it isn’t technically a gas, and is typically referred to as sulfur mustard when being researched by scholars.

Unlike nerve agents, sulfur mustard doesn’t typically cause symptoms until 12 to 24 hours after being exposed. Exposure to the substance can also cause permanent disfigurement in victims and can lead to permanent blindness.

Because of the carcinogens present in sulfur mustard, a victim’s risk for cancer dramatically increases even after recovery. 22 years after World War I, 122 genes were identified by c-DNA microarray profiling to have significantly mutated. Women exposed to it have a higher probability of delivering infants with birth defects or cancer.

In a gaseous state, sulfur mustard is typically colorless, though it can also feature a green or yellow haze, and often smells like garlic, horseradish, or sulfur.

Though its use was banned by the United Nations Chemical Weapons Convention in 1993, it has most recently been rumored to have been used in the civil war in Syria. 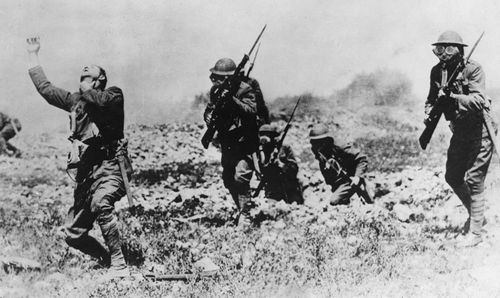 As far as nerve agents are concerned, Soman is one of the deadliest. It’s an extremely toxic substance, which interferes with the nervous system in mammals, inhibiting enzyme and neurotransmitter production, causing most of the same symptoms as other nerve agents on this list, with the exception of paralysis. Respiratory failure is also possible in large doses, and even small doses absorbed through the skin can poison the human body.

It’s most deadly when inhaled, though. Victims can expect to suffocate if exposed in this manner. Like other nerve agents, it’s colorless and odorless, and typically smells like camphor (which is an amber colored organic compound used in ointments and creams).

Soman has been classified as a weapon of mass destruction by the UN, and its production and stockpiling was banned in 1993 by the CWC.

It is thought that Soman was one of the chemical weapons used in the Iraq War in the 1980s, and that the Soviet Union had vast quantities stockpiled.

It’s thought that the deadly nerve agent known as tabun was one of several chemical weapons already mentioned to have been used during the Iraq War. Tabun is an organophosphorus nerve gas, developed during World War II by German chemist, Gerhard Schrader (who also created Sarin). Both of these nerve agents were developed accidentally as pesticides.

Tabun can come in two forms, a colorless, tasteless liquid, or a brownish liquid with a faint, almost fruity odor.

Like other nerve agents, tabun mixes very easily with water, and can be used to poison water supplies. It can also be released into the air as a gas. Most nerve agents are significantly more deadly when inhaled, and tabun is no exception to this.

Symptoms include visual disturbances, chest tightness, vomiting, and convulsions. A large dose is very likely to cause death.