Geoglyphs are fascinating and mysterious works of artistic and cultural significance, many of which continue to defy efforts to date or even uncover who made them, let alone why. We’ve talked about the Nazca Lines in other lists, but now it’s time to focus on the lesser known geoglyphs that have been found around the world. Though not quite as famous as the Nazca Lines, they are just as, if not more, remarkable.

Here are 10 of the most remarkable geoglyphs found around the world. This giant stick figure in the shape of a horse is the size of a football field and it’s visible from as much as 20 miles away. It’s survived for 3,000 years thanks to a persistent ritual, called “chalking day” where groups of people are handed hammers and buckets of chalk and assigned specific regions inside the horse’s outline. Those workers hammer and smash the chalk into paste, brightening the white stony pathways inside the horse and preserving the oldest of England’s hill figures.

National Trust, a conservation organization oversees the cleaning, ensuring that the horse’s original shape is neatly preserved. Considering how old the geoglyph is, archaeologists think that the trenches which make up the horse’s figure must have been dug by antler picks and wooden spades. And like many other geoglyphs around the world, no one is certain why it was made, or how the ancient people who dug it up managed to know how it would look from far away.

Although, one thing that stands out about White Horse Hill is how easily it can erode. Unlike the Nazca Lines, the horse requires constant upkeep. It’s a bit of a mystery why its creators chose such an unstable spot for the horse, but archaeologists suspect this may have been intentional.

Back in 2015, NASA began studying a series of giant geoglyphs in Kazakhstan. They went so far as to instruct the astronauts aboard the International Space Station to photograph the region as well. The oldest of the glyphs are nearly 8,000 years old and vary in size and shape. Some of them appear as large circles, composed of smaller circles, and some are as large as an aircraft carrier or large enough hold several aircraft carriers.

These geoglyphs have forced archaeologists to reconsider when humans developed the ability to plan large, sophisticated projects like this. One of the mysteries that persists around the Neolithic markings, though, is the fact that many of them would have required the Stone Age tribes who made them to stay in the area far longer than archaeologists think they did.

The Blythe Intaglios are a mystery, not only because archaeologists can’t agree on how old they really are, but also because they can’t agree on who made them. Best viewed from a helicopter, the geoglyphs appear like ancient cave paintings carved in the earth. Most of them depict a single person, accompanied by figures representing various animals, such as horses and serpents. They’re the only geoglyphs in this particular region of North America and occupy a larger trove of land than the Nazca lines.

Archaeologists and Chemehuevi Native Americans who still live on the land have different theories for what the glyphs represent. Archaeologists believe that they were carved into the earth 3,000 to 10,000 years ago as a means to represent powerful native American leaders, while the Chemehuevi believe that they’ve been a part of the land since “forever” and that the combined geoglyphs tell the story of their creation myth.

It’s believed that the Blythe Intaglios were made by scraping at the darker top layers of soil, revealing lighter soil underneath.

One of the curiosities of these geoglyphs is that many of them depict horses, which throws a wrench into dating them. Archaeologists have presented a few options here. One is that the glyphs were made after the Spaniards arrived in the Americas in the 1500s, bringing European horses with them. A second is that the geoglyphs could date back more than 10,000 years before the North American horse went extinct. And the third is that North American horses didn’t go extinct when we think they did, but were a source of food, rather than a mode of transport for native Americans.

The Nazca Lines may be the most famous geoglyphs in the world, but they’re not the only ones in Peru or even the Nazca region. Paracas Candelabra is a large image resembling a trident with curly, almost cactus-like extensions coming off of it. The geoglyph is 595 to 800 feet long, carved into the side of a hill with an average depth of two feet, and is visible as far out to sea as 12 miles. Radiocarbon dating puts the creation of the geoglyph back to 200 B.C.E.

What the Candelabra depicts, is up for debate. Some archaeologists believe it may represent one of the South American gods, or it could represent Jimson Weed, a hallucinogenic plant. It’s thought that in ancient times, residents of the Paracas region would travel up the coast to what is now California to harvest the weed.

Though some residents think that the Candelabra represents a three-pronged candlestick holder or a cactus.

Still, the area has been a port for sea fairing travelers for centuries, and some think it’s possible that one of those sailors could have carved the Candelabras into the side of the hill during a layover, but no one is really certain.

The Effigy Mounds National Monument in Iowa is meant to protect more than 200 geoglyphs constructed by Native Americans between 700 and 2,500 years ago. The area encompasses more than 2,500 acres, with most of the mounds depicting local animals. Like other geoglyphs, most of the grass-covered mounds can only be properly seen from the air.

Archaeologists aren’t really sure which Native American tribes made the mounds, but they have been attributed to a number of different tribes who lived in the Southwest.

In recent years, activist groups have called on the state government of Iowa to officially designate the monument as a national park to help preserve the mounds as a national treasure and provide a place where working families can enjoy the natural beauty of Iowa’s scenery.

The Atacama Desert is one of the world’s driest non-polar deserts. It crosses parts of Peru, Chile, Bolivia, and even Argentina. The desert is also home to more than 5,000 geoglyphs, and one of them has sparked much debate in the scientific community.

Set against the backdrop of the Atacama Desert’s felsic lava formations and reddish sand pointing toward the Andes mountains, the Atacama Giant is a mystery that has puzzled archaeologists for years. Radiocarbon dating on geoglyphs is difficult and often produces contentious results, but some scientists think that the Atacama Giant dates as far back as 600 C.E.

The geoglyph is a simple stick figure of a man with his arms raised, with what could be a crown. Some archaeologists believe that the Giant has some astronomical significance and that it was used as a means to mark the change of seasons. The moon can sometimes be seen rising over it, illuminating the Giant’s crown. But most archaeologists can’t agree on the geoglyph’s meaning or its origins.

Dating back more than 6,000 years, the Russian Moose geoglyph, which measures 900 by 12 by 15 feet and borders the Zyuratkul lake in the Ural Mountains of Russia, is thought to be the oldest in the world.

It was discovered by a local researcher named Alexander Shestakov while scanning through Google Earth images. Shestakov then surveyed the area with seaplane and paraglider, followed by an archaeological expedition.

Though, it’s generally accepted that forced child labor was not used by the adults of the tribe. The building of the moose geoglyph was a cooperative effort used to instill the common values of the tribe’s culture into the children who helped build the moose.

Though, who those people were and why they made the moose geoglyph remain a mystery. 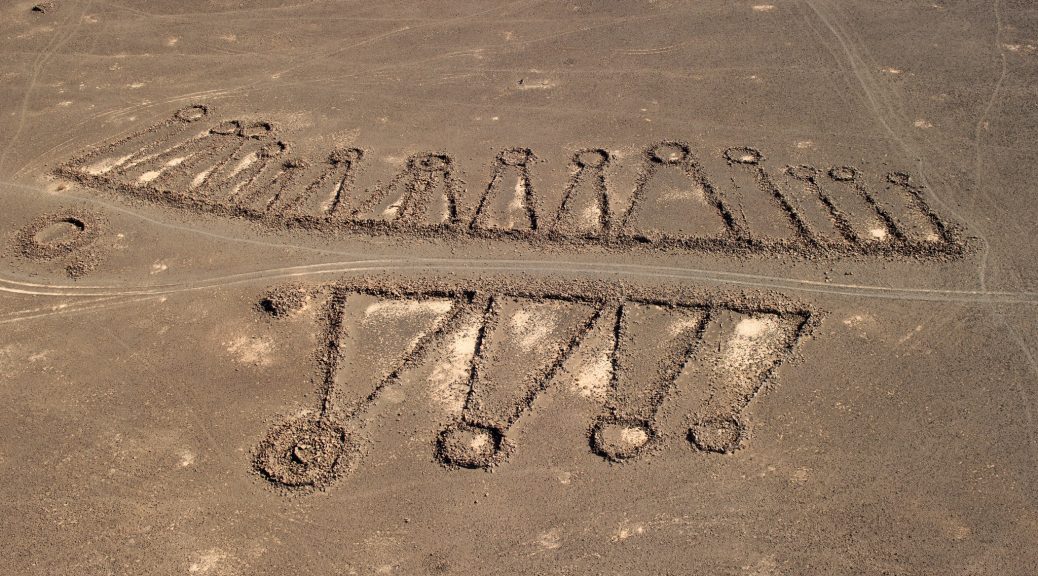 Located not far from the Dead Sea, the Works of the Old Men (as they’re called by the Bedouins) occupy a larger swath of land than the Nazca Lines and consist mainly of large geometric shapes accompanied by smaller ones and lines that crisscross their forms. Most of them appear to be spherical, wheel-like structures, but a few are oblong and rectangular. Some are solitary, while others are surrounded by other similar geoglyphs.

It’s also thought that one of them, shaped like a giant kite, was used in some kind of hunting system.

But like other geoglyphs on this list, it’s not really known when or who built the Works of the Old Men. Some scientists claim that the site is anywhere from 3,000 to 5,000 years old, but others suggest that it could be far older, suggesting 8,000 or even 9,000 years old. That would put them right up there with some of the oldest geoglyphs ever found on Earth.

Not all geoglyphs are ancient. Andrew Rogers, a California artist, has created a series of geoglyphs in Yucca Valley which represent Native American markings. Most of the glyphs are only truly appreciated from the air, some measuring as large as 200 feet, and others measuring over 160 feet long.

More than 460 tons worth of stones were used in their construction, stacked on top of each other to create Rogers’s designs.

As many as 450 people aided in the construction of one of these glyphs while bearing 100 mile-per-hour winds. The geoglyph appears as a circle with a line through it from above, a Native American hunting symbol.

His critics say he’s crazy, but some think that his geoglyphs could live on as long as the Nazca Lines and Stonehenge, surviving until someone can puzzle over them and wonder who built them, just as we do with the ancient geoglyphs we marvel at.

1. The Long Man of Wilmington

Measuring over 230 feet long and thought to date back to 10,000 B.C.E., the Long Man of Wilmington, England, appears as a guide over East Sussex. Etched into the earth, he holds two spears that run parallel to his body.

Neo-Druids were outraged in 2007 when women laid in the grass in an effort to give the Long Man feminine characteristics like hair, lips, and breasts, calling foul and claiming that the stunt was an act of vandalism on a sacred artifact. Though, in 2010 pranksters added a generously sized member between the geoglyph’s legs, giving a new meaning to the “Long Man.”