The ocean is home to a vast array of life forms on a scale most of us will never appreciate. Over 226,000 of them have been identified, but it’s estimated there may be up to 1 million different creatures lurking down there. The internet is rife with lists of some of the most unusual, but they often repeat themselves and pick creatures we’ve all seen before like goblin sharks or gulper eels. Weird, for sure, but also well known. Lucky for us, there are still thousands and thousands more to choose from. Here’s ten of the strangest.

No one will accuse Duobrachium sparksae of having an easy to pronounce or remember name, but until someone coins a better one, that’s all we have. It’s a kind of comb jelly and it was only discovered in the waters near Puerto Rico back in 2015.

The little critter survives in very deep waters, about 3,900 meters below, and it resembles a sort of living bubble. Scientists remarked, with the long tendril-like appendages hanging off of it, it looks a bit like a hot air balloon. When viewed from the tentacle side, it looks like a box.

The central blob actually has two arms from which much longer tentacles can extend. The retractable tentacles are 12 to 22 inches in length and root the creature to the sea floor, helping to control its position.

Deep sea life is always interesting because the environment is about as alien as it can possibly get on our planet. The creatures that live beyond where even light can penetrate and where pressure would crush us to smithereens are often incredibly and unusual to our eyes. And scientists have discovered what they think may be the deepest living fish of all – the Mariana Snailfish.

Inhabiting the deepest part of the ocean, the Mariana Trench, you can see these fish yourself if you can make the journey down 26,000 feet. They grow to under a foot in length and have translucent skin and no scales.

Their diet seems to consist of tiny crustaceans that also make their home at depth and, as you’d expect, they don’t have to endure a lot of predators at that depth.

There’s no way an animal that managed to snag the name “pink-see-through fantasia” is anything but weird, so rest easy that this one lives up to its name completely. In fairness, the proper name for his deep sea cucumber is enypniastes and some people will also call it the headless chicken fish, so you have some choice.

The cucumber uses bioluminescence to ward off predators and has transparent skin. That ensures that its mouth, stomach and anus are all visible no matter what angle you’re looking at it from. It’s also fairly small, ranging from four inches to just nine inches in length.

You’re not likely to find this creature in your own travels. It hangs out at depths around 2,500 meters although they have a range of about 1,000 meters up and down through the water column. They use tiny webbed fins to swim and use little tentacles to push sediment into their mouths to eat.

Amazingly, this curious creature isn’t one of these new, bizarre discoveries of the last few years. This creature, a tunicate, was actually first described back in 1782. And it’s just as weird to most people today as it was back then, simply because it looks like a rock that has guts and blood inside of it.

The pyrua chilensi doesn’t just look like a rock, it lives like one, too. It can’t move anywhere on its own, so it just filters water, sucking it in and feeding on microorganisms along the way. How does an immobile rock monster reproduce? Well, they’re all born male, but part of the way through life they become hermaphrodites and just breed with themselves, shooting both sperm and eggs into water around it until they meet, fertilize, and germinate into a new living rock.

Despite the creepy appearance, people actually eat them, and you can cook them or enjoy them raw. Enjoy might be a bit of a stretch though, since the taste is described using words like “bitter,” “iodine,” and “soapy.”

The deep sea osedax, also known as the zombie worm, has no mouth or anus and drills into whale bones. That’s a pretty intense resume for anything living on land, sea or air. Despite not even having a digestive tract let alone a mouth, these mysterious worms wait for whale fall, which is what happens when a whale dies and then sinks to the bottom of the sea. They then latch onto the corpse. Their flesh secretes acid, which allows them to bore right into the bones. Once inside, a symbiotic bacterial process allows for the digestion of fats and enzymes that the worms then absorb. It’s not the easiest way to get a meal, but it works for them.

If none of that was weird enough, then know that the worms you can see are always female. Males remain in the larval stage their entire lives, living in a slime tube that encases the female, and existing solely to fertilize her eggs when the time comes.

The idea of animals living in colonies or hives is very common up here on the surface. Ants, bees, termites and many more live in this way where one queen seems to rule the roost and the rest of the colony serves her needs. They call this eusociality and it’s only been observed in one marine species – a shrimp known as Synalpheus regalis.

These tiny shrimp live in coral and sponges and come in a variety of bright colors. They’re snapping shrimp, which means they have one giant claw and one little claw to make them look either intimidating or hilarious depending on your perspective.

Like any good hive society, the shrimp have a queen. Colonies can grow to over 300 members, but there is only one female capable of reproduction. Hive members care for the young, protect their colony from predators, and work in a communal way to accomplish tasks.

Discovering a new species is exciting for anyone in the scientific community and traditionally those of us who just have a passing interest in animals just hear about it secondhand. But the stubby squid is one creature whose discovery you can actually watch first hand on video since it was recorded by researchers on the E/V Nautilus back in 2016. And this may be the only time in history that we’ll ever know of for sure when a new species’ discovery was accompanied by laughter from everyone involved because the animal looked so goofy.

You can hear the crew puzzle over what the little creature might be, then laugh as they zoom in and point out that it looks like it has googly eyes. The tiny creatures are between 0.3 inches and 3 inches in length, which accentuates just how funny the eyes look since they’re so large relative to the rest of it.

Phronima is the name of a terrifying but blessedly small ocean parasite that some believe inspired the alien queen from the movie Aliens. Right away that’s a creepy thought for any living thing, but in both looks and behavior the phronima scores big points for being monstrous.

The parasites are found almost everywhere on earth in the oceans, except in polar waters. Unlike other, similar species, phronima swim in open waters instead of waiting for food to find them on the sea floor. This is because they’re on the hunt for a ride.

Phronima, which have dangerous if tiny claws, hunt down other creatures called salps. A salp is a barrel-shaped tunicate that, for all intents and purposes, looks like a small, living piece of Jell-O. A phronima will hunt down a salp and use its claws to hollow out the inside, then move right in.

The phronima can now sail the seven seas, protected inside their sort-of living boat, eating and drinking and reproducing as they go. Somehow, the salp, which is a peculiar life form to begin with, doesn’t fully die despite being hollowed out. The outer cells stay alive, so the whole salp boat structure maintains its shape and protects the phronima inside.

As far as the link to Alien goes, the story seems to be wholly anecdotal. That said, there are some convincing side by side photos that suggest the alien queen, rather than HR Giger’s original alien, may have been inspired by the little monster. 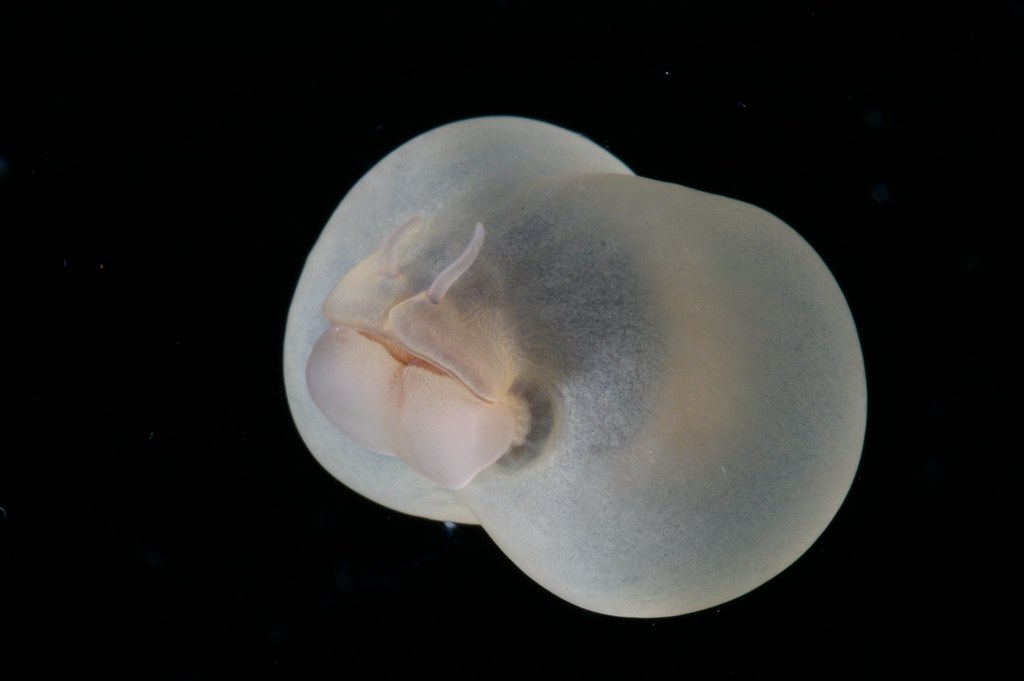 How do you make a list of strange sea creatures and not include one that is legitimately named the Pigbutt Worm? If that sounds too uncouth for you, you can use its alternate name “flying buttocks.”

Discovered in 2007, the pigbutt worm is a worm but it’s round, the size of a hazelnut and yes, it looks like a flying butt. It floats about around 3,000 to 4,000 feet below the surface and their tiny mouths are caked in mucus to complete the image in your mind.

Nearly every other species of worm closely related to the pigbutt lives in a tube, so this free-floating bum is a standout on its family tree. The working theory is that they float around in clouds of detritus and tiny bits of bio-matter and then eat whatever sticks to their mouth mucus.

The word “giant” sets up some expectations and when we’re talking about the ocean, there’s a standard to live up to. This is the home of the blue whale, the largest creature that has ever existed, after all. So if there’s something in the sea called a giant siphonophore, it better be impressive. Luckily, the name isn’t just smoke and mirrors, this thing really is huge. It’s not as bulky as a blue whale by any means, but it’s no slouch.

There are nearly 200 kinds of siphonophores in the sea and describing them isn’t all that easy in layman’s terms. To start with, they’re colonial organisms, which means it’s not “a” thing, but a group of things. But they’re not all the same things. Different parts have different functions. There’s a sort of “main” part that you might consider a head, and then other parts that develop independently which can help the whole organism eat or swim or digest and other such functions. Think of it a bit like a deep sea Voltron, several small parts that are assembled to make a functional whole.

The giant siphonophore is about as thick around as a broom handle. Not so giant at all. However, it can also grow to be upwards of 130 feet long. That makes it one of the longest creatures in the world by a longshot, only having to compete with the bootlace worm which has been observed to grow slightly longer. That said, one that was seen off the coast of Australia was estimated to be about 150 feet long.

Lucky for those of us who are not giants, the giant siphonophore is relatively harmless and feeds on small crustaceans and other animals which can best be described as gelatinous. It uses bioluminescence to attract its prey and uses a toxin similar to that employed by jellyfish to poison its prey. That part does sound dangerous, but you need to remember that these are deep sea creatures. They actually can’t exist near the surface and their bodies will burst if they are brought up to surface pressure.