We are headed into a world in which there is actively a fourth Transformers film being made as well as a third G.I. Joe film. Films are now being made based on amusement park rides as well as video games. Given all the attendant nostalgia which now grown up geeks have for their youth, there are still quite a few properties from a magical time in cartoons which have yet to get the live action treatment. Some of these may yet become a reality. Some of them are stuck in a fan’s dream. Here are the Top Ten 1980’s cartoons that still need to be made into live action films.

A team of galactic crime fighters in the far flung 29th century are given metal bodies and wings to fight inter-galactic organized crime. Silverhawks was made by the same people who did the Thundercats (Rankin/Bass

.)  As a result, many of the same actors who did Thundercats also spent a few minutes hammering out voices for Silverhawks. You will be happy to know that in roughly a thousand years, people will still carry around guitars without a hint of irony or apology.

How Likely Is It To Be Made Into A Movie?:

A little over a year ago, there was a single internet report stating that Jon Favreau (Iron Man and Elf) was attached to write and direct Silverhawks. This may come as surprising news to Favreau who was last reported to try and secure funding for an independent comedy called Chef.  Also, Favreau might not be so ready to go back into the genre of  Space Cowboys. The last movie which he directed was Cowboys and Aliens and that underperformed at the box office. This would mean that Favreau would be making a more expensive movie covering basically the same material that did not work once before. It is possible but highly unlikely. 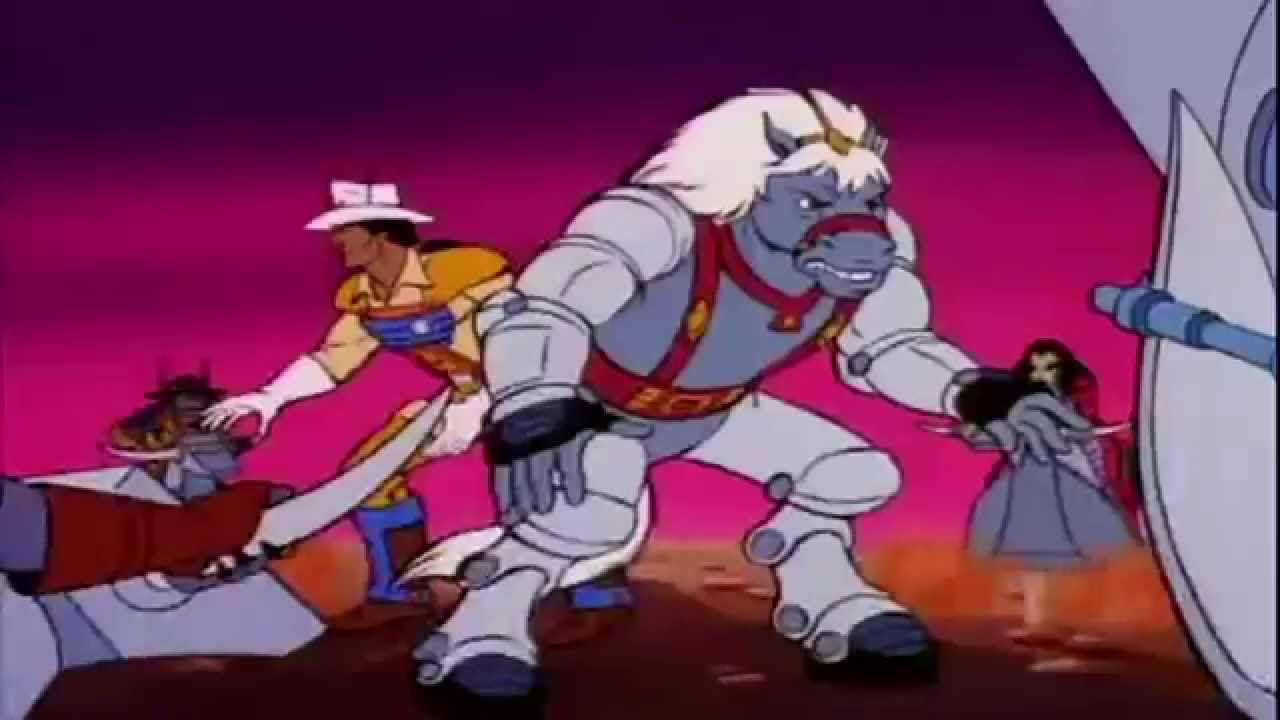 BraveStarr was about a Native American law enforcement officer in space. He kept ideals and principles handed down throughout the generations. BraveStarr also fought crime in a Western/Space setting with a horse who could stand on two legs and fight alongside him.

You never actually want to say never to anything. There are a few people on the internet who absolutely would buy tickets to a live action BraveStarr movie the moment that it came out. On the other side, Hollywood is all about trends. The current trend is that Cowboys and Aliens underperformed and The Lone Ranger flat out tanked. Convincing a studio to green light the project would require at least one movie proving that a cowboy can give you a blockbuster. Recently, Django Unchained and True Grit proved westerns might have an audience, but fantastic elements have not successfully spun into box office gold. 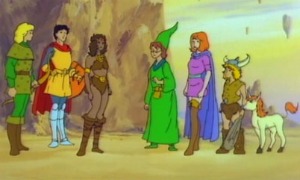 Left to right: Hank, Eric, Diana, Presto, Sheila, Bobby and Uni. in the first episode “The Night of No Tomorrow”

Dungeons and Dragons was a Saturday morning cartoon about teenagers who got on an amusement park ride and ended up in an alternate magical dimension. Most people who saw the cartoon tend to remember it fondly. It was based loosely on the role playing game of the same name. The teens were led by a mysterious Dungeon Master with the promise of one day getting home.

Ardent fans of the original cartoon would love to see it. However, there was a movie based on Dungeons and Dragons (though not the cartoon) was made in 2000. If you don’t remember all of the merchandising, that is because the film was a loss by any stretch of the imagination. It actually only recouped about a third of what it cost to make it. The fantasy elements might play out like a younger themed Lord of the Rungs, however it might be hard to get traction for the project.

After a collision from space, the Earth is left in ruin. After thousands of years, a new civilization on Earth has grown up from the debris of the old. The Earth has become a lawless society  infused with sorcery in which the ‘ancient ruins’ are our modern day cities. Heroic crusaders including Thundarr, the magical Princess Ariel, and beastly Ookla The Mok are attempting to restore order.

On the plus side, you would be combining some of the best elements of Planet of the Apes, Conan The Barbarian, and Star Wars. If made, the movie would be visually stunning and possibly quite popular. For the record, this Princess Ariel actually pre-dates the Disney version. On the minus side, there is virtually no discussion about bringing Thundarr back in any form. As cool as it was, Thundarr did not last very long and there have not been any even animated revivals. Still, you should never really discount a property which could potentially give you Conan with a light saber. 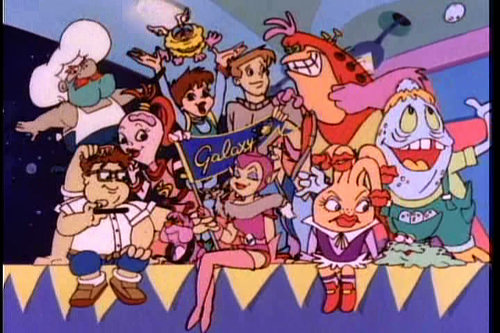 Two human high school students (naturally one boy and one girl) attend an intergalactic high school. They meet and try to understand all sorts of weird aliens and races. Along the way, there is a little more than a hint that they might actually be falling in love.

There might be some signs of life to this one. There was a report that Vanguard Films along with 1492 Pictures and Dreamworks signed a deal to produce Galaxy High into a film. Of course, Disney recently re-acquired rights to Ghost Rider. While the rights exist to make a movie and there may be a script in development, that does not necessarily mean that we will see a picture. The fact that a studio president will come out and talk about it as well as having a screenwriter is a good first step though.

M.A.S.K. (Mobile Armored Strike Kommand) was a group which fought crime with enhanced vehicles as well as actual masks which provided special weapons. Their main opposition was a criminal syndicate called V.E.N.O.M. (Vicious Evil Network of Mayhem) who left little doubt as to their intentions. V.E.N.O.M. has similar weapons as M.A.S.K. in both autos and masks.

Done right, we are talking about Mad Max meets G.I. Joe. You have to love the internet. The only people really trying for it are 2 people that wrote a fan script and trying everything that they can to get the word out. Beyond that slim chance, it seems pretty unlikely. However, this is a franchise that not only once spawned a cartoon as well as toys and video games. Done right, the property could be re-launched without really reminding people that it existed once before.

4. He-Man and the Masters of the Universe 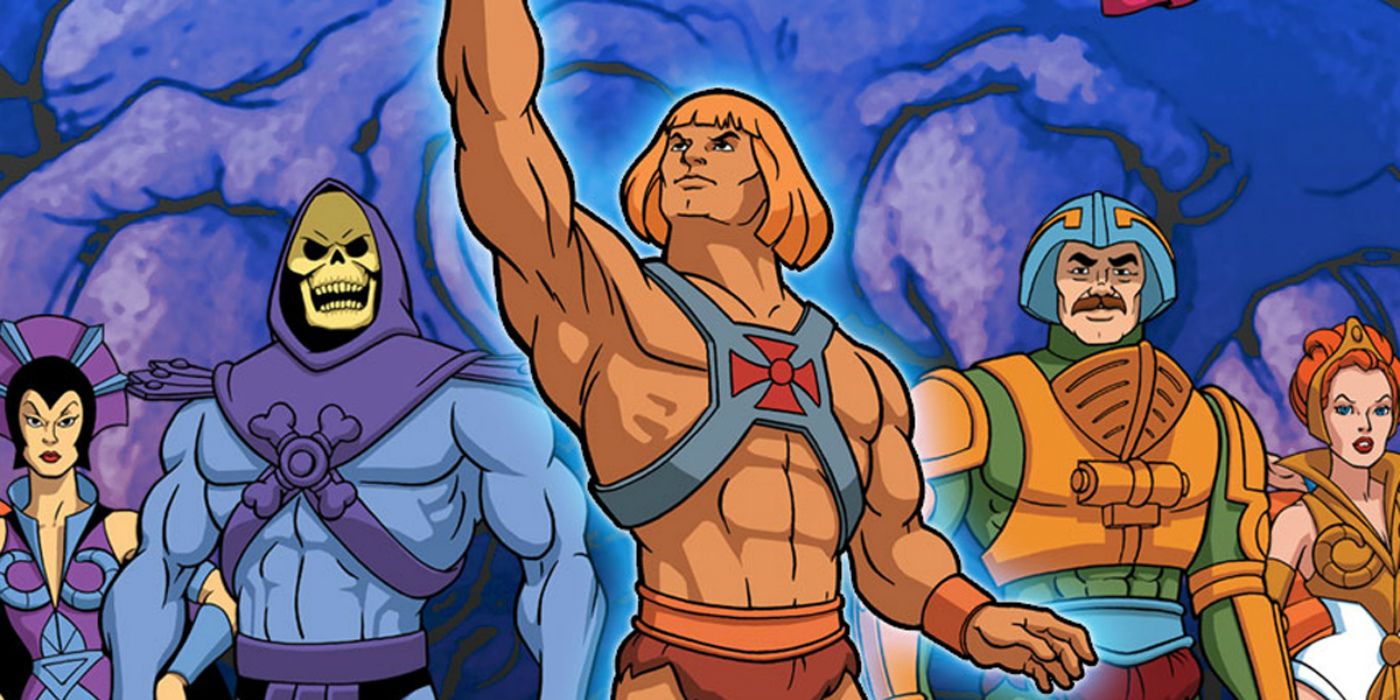 Prince Adam wields a sword with all the powers of  Castle Grayskull to become the most powerful being in the Universe. As He-Man, Adam must thwart the eternal threat and scourge of the planet Eternia against the evil  Skeletor and his minions. He-Man had a cartoon, toys, video games as well an animated revival. As a property, it is almost instantly recognizable to most people.

Well… funny story. It was. Once. Ever since then, there has been rumors of another one as a sequel or a full out reboot of the franchise. At one point, John Woo was attached to direct. After Transformers came out in 2007, the rumors only intensified. When people saw G.I. Joe: The Rise of Cobra, it seemed like a He-Man movie would be imminent. As of this writing, even that was over four years ago now.  Every now and again, some one will ask the question and a new rumor will pop up on the internet. While it always seems likely, no firm information on an actual production has surfaced. In an attempt to start a new civilization from the dying planet Thundaria, the Thundercats took off in a starship headed towards a new home and world. Unfortunately, the new Earth was inhabited with dangers all its own. Those dangers included a vile mutant population as well as an ancient evil named Mum-Ra. Complicating life was the fact that their prince had the body of a man but the mind of a boy.

Fans have been clamoring for a movie of  the Thundercats for years. They have implored online. They have made fan trailers. The fan base has actually gotten a new cartoon series on Cartoon Network based on the property. However, the exact nature for the studio of how to make such a movie would be a bit in doubt. There was a preliminary study on doing it as a CGI movie but the scenes did not come out to satisfaction. While there is definite studio interest in making a movie out of the property, the details of exactly how seem to be up in the air. Of course, they might want to visit a few conventions to see realistic versions of anthropomorphic cats walking around on hind legs.

Technically, there were three different Voltrons. They defended the Universe against galactic threats. Usually, the property that most people are referring to is the Lion Force. The Lions were operated by pilots and could work individually or collectively as one giant robot. Voltron was popular in both the United States as well as in Japan where it originated. The second force consisted of air, sea, and land vehicles. The third was a three part Voltron which was never a cartoon in America.

It would honestly depend. Given the relative success of the Transformers, it would seem like a no-brainer. There has been talk of a movie for years. The recent lackluster performance of the movie Pacific Rim would be seen as a detrimental factor towards a potential Voltron movie. It would probably practically have to be directed by Michael Bay in order to get the movie done. Of course, even that scenario might depend on the success of the upcoming Michael Bay produced Ninja Turtles which similarly has fans worried.

Robotech is short for Robotechnology. It refers to alien technology found on Earth which was then used in order to make weapons as well as robots. These weapons would then be necessary to fight off extra-terrestrial invasions. The cartoon series followed not only the war between the planets but also the personal interactions between the soldiers and crews working the alien technology.

Originally, an animated movie was tested on audiences in the United States in the 1980s. It did not test well. Recent discussions have been revived though. Reportedly, Leonardo DiCaprio stopped negotiations on the upcoming Star Wars Episode VII because of a desire or commitment to work or on a potential Robotech movie. Leonardo’s attachment would certainly move along the process. Of course, the alternate issue would again be the poor performance of Pacific Rim which did cover similar ground. However, this does seem like the most likely franchise to be seen in full glory at the local Cineplex.