With the popularity of The Lord of the Rings trilogy and now the The Hobbit trilogy it seems many fans of these movies are catching “Hobbit fever.” And while the movies are filled to the brim with action, heroics, and bravery, there are quite a few characters from the books that have yet to make it to the big screen. Characters like that are so badass, yet haven’t received the attention and notoriety they should, until now. 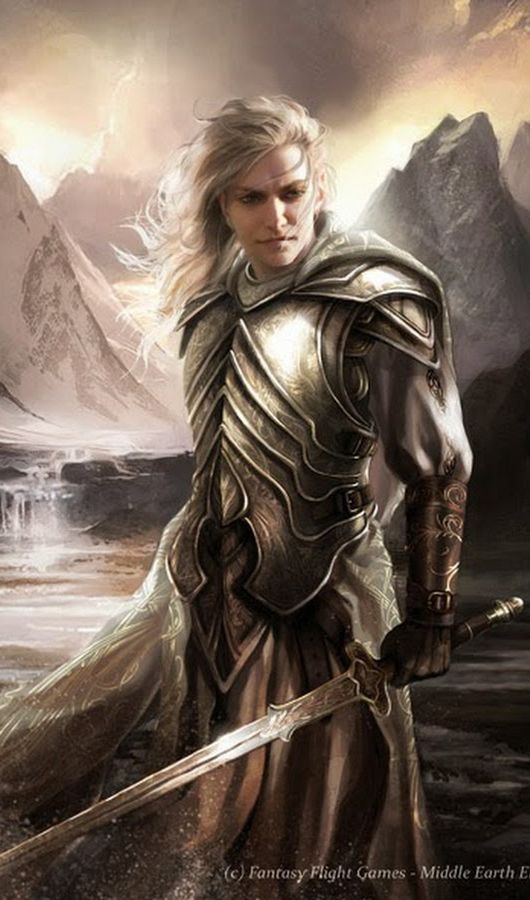 Remember in the Fellowship of the Ring when Frodo got skewered by the Witch King and Arwen showed and saved him by taking him to Rivendell? What you were really seeing was a character named Glorfindel getting the veritable shaft.. In the books, Arwen doesn’t show up until way later, and Glorfindel and his beautiful, golden man-locks are what whisks Frodo to safety. Rewind to one thousand years before the main story, and Glorfindel pretty much single-handedly defeated the Witch King and his armies in Angmar. He was the one who predicted that no mortal man would kill the Witch King.

with the added handicap of not being Gandalf. But really, it’s almost like Gandalf copied him because Glorfindel died in the fight with the balrog as well and was resurrected. Wow Gandalf. No one can have something to themselves, can they?

9. The Mouth of Sauron 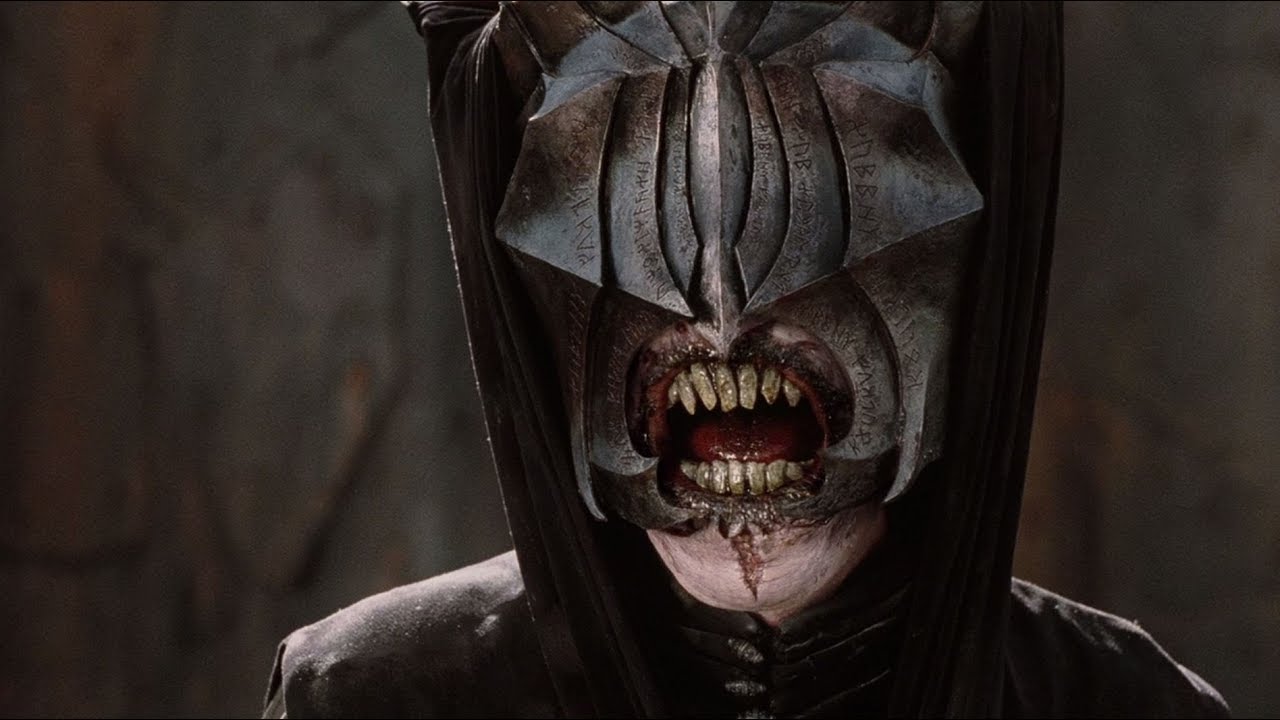 In the movies, the Mouth of Sauron only appeared in one scene and we never really get to see his true nature (or even hear his name for that matter). And that’s kind of sad because he’s quite the badass. First of all, our snaggle toothed friend is the only person that speaks with Sauron directly, and he proceeds to give his orders for him, quite literally being his mouth (because that’s something a giant floating eyeball needs apparently). Sauron should consider brushing servant’s teeth a bit more especially if he is giving orders on his behalf.

In the books, he directly taunts the fellowship to their face, especially Aragorn, who he claims isn’t really king. He demands that the armies of the West surrender, and when they refuse, he rides back behind the Black Gate, and sends the armies of Mordor on them. 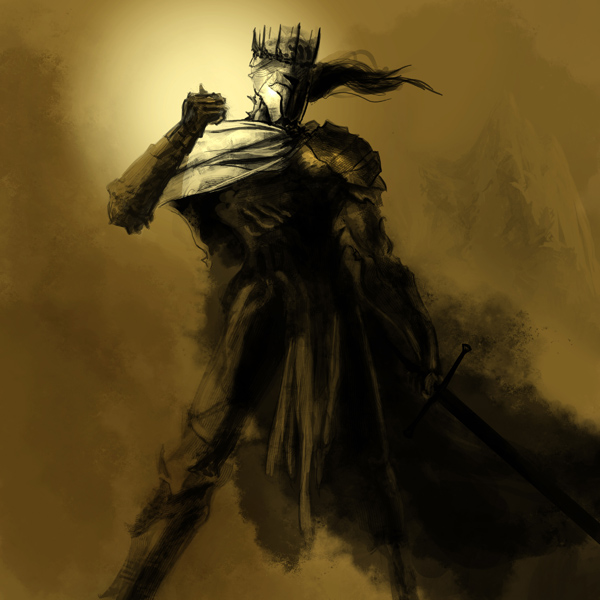 Melkor was the first dark lord. Sauron, the big bad guy everyone knows about was this guy’s apprentice, and is far less powerful. When the world was being created, Melkor was in a constant fight against it, raising valleys that were created, smashing mountains, and just being a general jerk. And while Sauron was eventually killed, Melkor was banished into the void, but could not be killed. It’s prophesied that he will return one day. All evil in the Lord of the Rings universe originated with Melkor. He’s not exactly a nice guy. If you watched the Hobbit, you at least heard Ungoliant’s name mentioned when Radagast saw the spiders and said that they might be her offspring. Ungoliant is the mother of Shelob, and if you thought Shelob was a big spider, this thing was monstrous. She’s not really even a spider, but more like a spirit that takes the form of a huge-ass spider.

In the Silmarillion, she drained the sap of the trees of Valinor and the wells of Varda, and extinguising all of the light in the world except for that contained in the Silmarils — which were jewels made from the light of the trees. Melkor and Ungoliant stole the silmarils and Ungoliant demanded them from Melkor. When he refused, she was so powerful from consuming the light that she was able to trap him in her web. Then Melkor, supreme bad guy of infinite badassery, cried out in fear. An army of balrogs rushed to his aid and chased Ungoliant off. But let me repeat that. It took an army of balrogs to get rid of her. 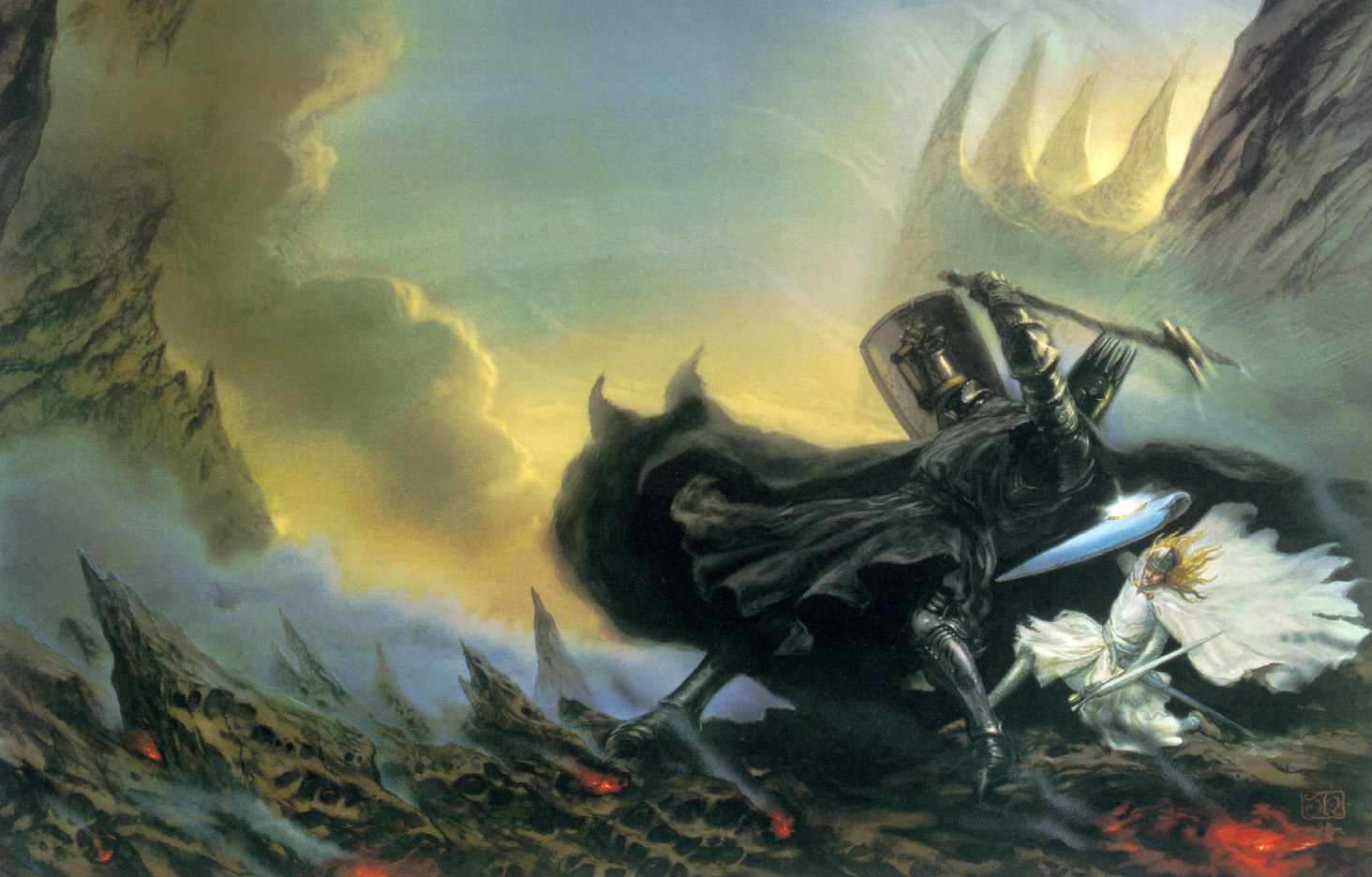 Fingolfin was an elven king who challenged Melkor to single combat. Melkor, that guy that makes Sauron’s exploits look like a kindergartner playing in a sandbox and the guy who couldn’t be killed. Melkor accepted, but he wasn’t anywhere near prepared for what he received.

Fingolfin wounded Melkor’s face seven times, and Melkor was in eternal pain from that point onward. Melkor eventually triumphed over Fingolfin because he was a Valar (almost a god) and Fingolfin was merely an elf, but not before Fingolfin severely injured Melkor’s leg– and he walked with a limp ever since.

Fingolfin is also one of Aragorn’s early ancestors, and it is said their line will continue for as long as the world exists.

We didn’t see Beorn in the the first Hobbit movie, but the party hadn’t exactly made it to Mirkwood yet. He shows up in the second Hobbit movie soy you can get a good look at him looking menacing in his bear form. Beorn was a giant of a man and had the ability to shapeshift into a bear at will. Beorn was driven out of his homeland when it was overrun by orcs, and he’s living as a hermit when he meets up with Bilbo and the others.

In the Hobbit, Gandalf kills the goblin leader– then Beorn proceeds to kill the new goblin leader in the final battle .Those poor goblins can’t just catch a break. 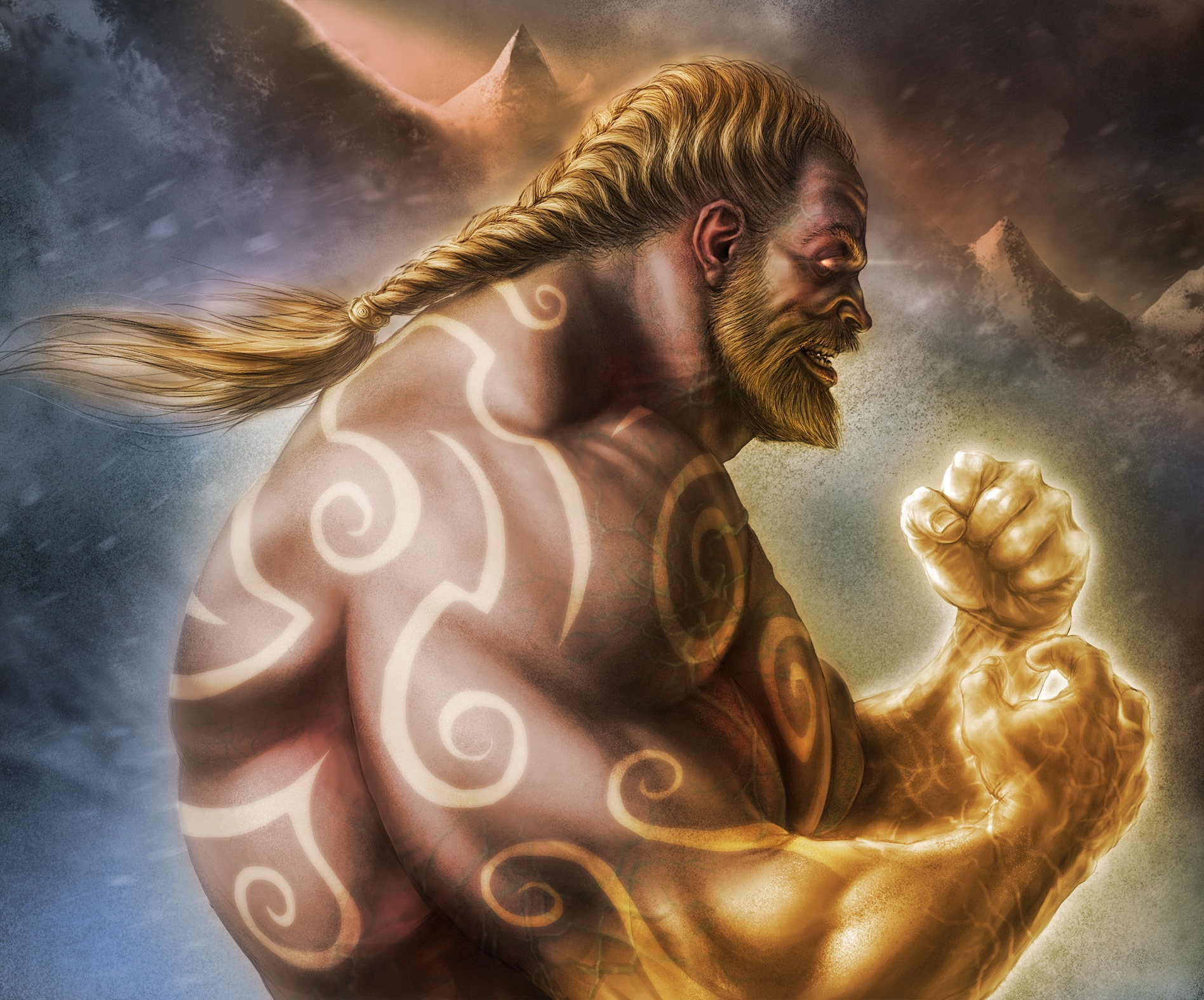 In the war against Melkor, his mere presence on the front lines make Melkor flee. And one time a snake bit him, and after days of excruciating pain the snake died. Okay, maybe that last one was Chuck Norris. It’s hard to tell.

Like any good warrior, he had a bit of a weakness for the ladies. He also loved wrestling and other contest of strength, presumably because no one was stronger than him. I’m sure we all love contests where it is physically impossible for us to lose. 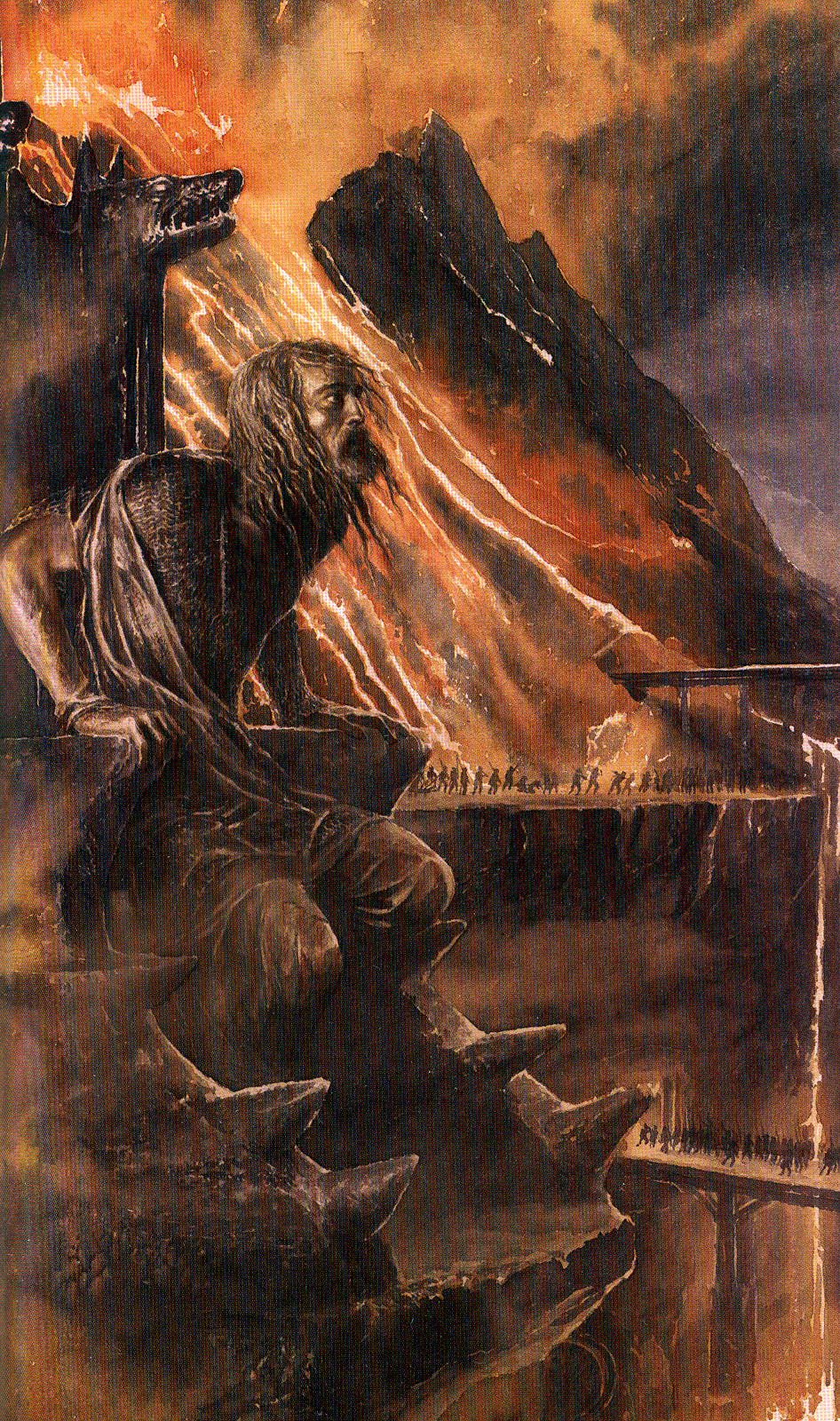 There are books and books of information about Hurin (both the Silmarillion and the Children of Hurin speak of him), but there is one moment in his life that earns him a place on this list. Hurin fought in the Battle of Unnumbered Tears against Melkor, and when the battle was lost, they retreated until their backs were to a river. They made a stand there and continued fighting until only Hurin was left standing.

Hurin threw down his weapons and took up the great axe of a dead orc, and fought the orcs back with that. He lashed out with the axe and cried “Day will come again!” with each swing– which was heard seventy times. Eventually the orcs subdued him (losing many a limb in the process), and brought him before Melkor captive.

Melkor cursed him and his children when Hurin refused to give him any information imprisoned Hurin on a mountaintop, where he remained for twenty eight years before he was released. And in all that time, despite having to watch the pain and misfortune of his children, he resisted Melkor. He was only released once all his children had died. Because Melkor was a spiteful, evil bastard. Tom Bombadil might not seem like the prime candidate to include on a list of basasses, but he is here for one important reason: the one ring holds no sway over him. You could chain him to a wall with the ring taped to his forehead for a thousand years, and the ring still wouldn’t tempt him with its power.

Frodo and the other hobbits met Tom in the Old Forest, close to the beginning of their journey. Merry is trapped inside a living tree, and Tom saves his life by singing to the tree and getting it to release him. He holds a tremendous powers that we never learn the full extent of and he can see Frodo while Frodo is wearing the ring– so we know that super-vision is among them. Frodo lets him try the ring on, and when Tom wears it, nothing happens. He then makes the ring totally vanish (possibly from existence altogether) then reproduces it and gives it back to Frodo. He later saves all of the hobbits again from the a bunch of barrow wights.

When the Council of Elrond poses just giving the ring to Bombadil to protect, Gandalf says that Tom would not understand why it needed protecting and would misplace it– which doesn’t seem much more than Tolkein realizing that he’d written himself into a corner. 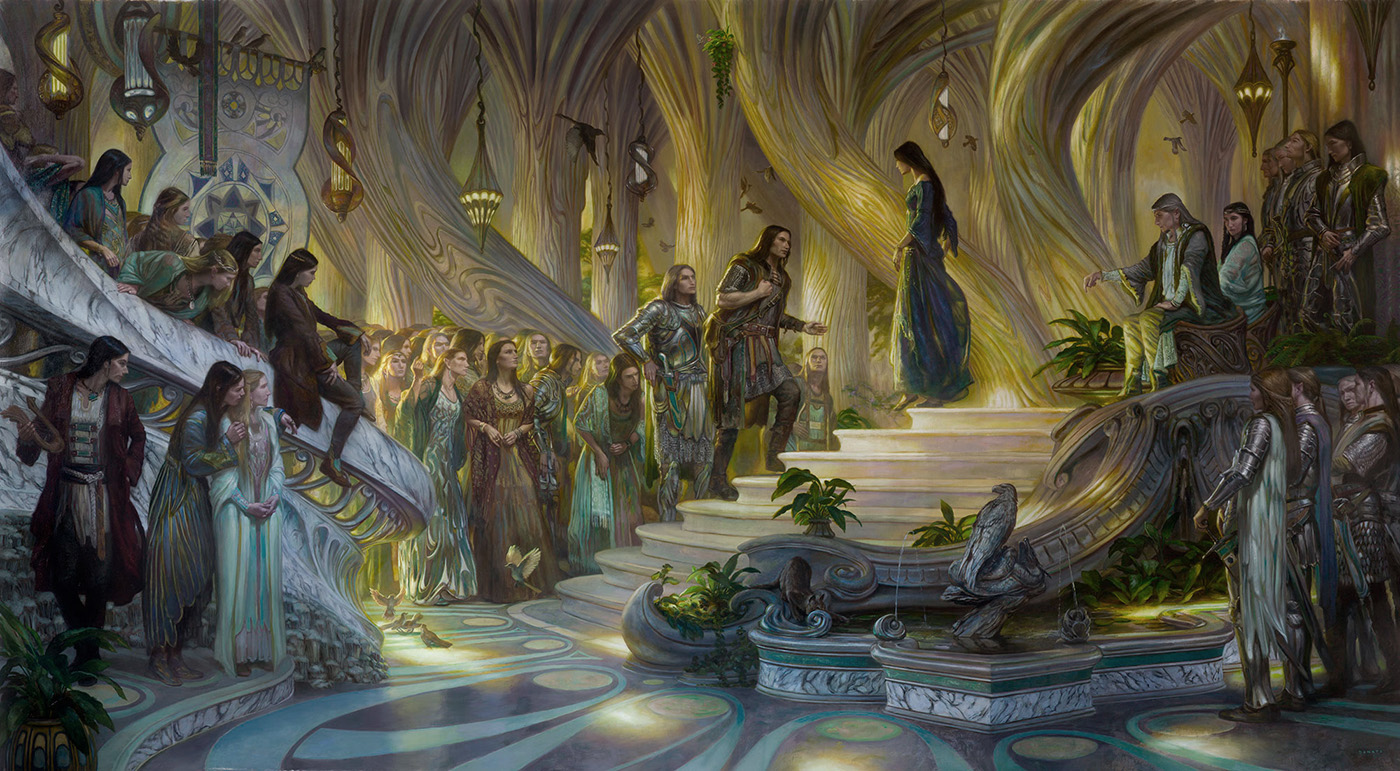 Beren went on what may be the most badass quest in the entire Tolkein mythos. You see, Beren fell in love with a princess by the name of Luthien, and her father Thingol heavily opposed their marriage. So he sent Beren on a suicide mission– saying that he could marry Thingol’s daughter if he retrieved one of the Silmarils from Melkor’s crown. So Beren went on his way and Thingol considered him dead.

On the journey there, Beren had to faced peril after peril, including fighting and besting SAURON! Beren cut one of the silmarils out of Melkor’s crown when his fiancee put him to sleep with her music, and he accidentally cut Melkor when trying to get a second, waking him up. Beren fled and was headed off by a great wolf under Melkor’s control. He held out the similar to the wolf, assuming that it would hold it at bay, but the wolf bit off Beren’s hand. It wasn’t exactly a good day.

When they returned to Thingol, Beren showed the stump where his hand has been and claimed that his hand still held the silmaril, and he had been successful in his quest. Beren helped hunt down the wolf, but was mortally wounded. Luthien died of grief upon hearing the news, and she moved Mandos, the lord of death to pity, and he restored both of them to life. Beren’s actions made someone love him so much, that not even death could kill him.