Some people call them crazy, while others consider them heroes, but there’s no denying that daredevils and stunt performers continue to command a huge amount of public fascination thanks to their death-defying acts of courage and outright lunacy. From skydivers and wirewalkers to magicians and flight-obsessed truck drivers, here are the top ten stunt men and daredevils.

Jeb Corliss is a professional BASE jumper and skydiver who has gained a reputation for his death defying leaps from famous world landmarks like the Eiffel Tower, the Seattle Space Needle, and the Petronas Twin Towers in Malaysia. Corliss was briefly the host of an extreme sports TV show called Stunt Junkies, but he was fired in 2006 after he was arrested during an unsuccessful attempt to BASE jump from the Empire State Building. Corliss had worn a prosthetic mask and a fat suit to sneak in undetected, but security guards apprehended him after he attempted to climb over the security fence of the building’s observation deck. Critics claimed the stunt would have put lives at risk, but Corliss insisted that he had put years of planning into the jump, and still claims that the guards endangered his life by trying to pull him off the wall.

A truck driver by trade, Larry Walters engineered one of the most creative–and downright stupid–stunts of all time in 1982, when he created his own homemade flying machine in his hometown of San Pedro, California. The aircraft, called Inspiration I, consisted of an ordinary lawn chair rigged with 45 helium weather balloons. Walters carried a pellet gun with him on the flight, and intended to eventually shoot out some of the balloons and make a graceful descent back to earth. Unfortunately, his calculations were off, and instead of rising up to a hundred or so feet as he had planned, Walters and his lawn chair immediately climbed to an altitude of nearly 15,000 feet. After flying for 45 minutes, Walters shot a few of his balloons and drifted back toward the ground, inadvertently catching a few power lines in the process and causing a major blackout. As his flight had taken him into federal airspace, Walters was arrested upon landing. When asked why he’d done it, he replied simply, “a man just can’t sit around.”

Eddie Kidd is a famed daredevil and movie stuntman, best known for undertaking over 3,000 death-defying motorcycle jumps. Kidd was the stuntman for Pierce Brosnan in several of the James Bond films in the 1990s, and back in 1979 he famously jumped 120 feet over a railway span for a stunt in the movie Hanover Street. Outside of movies, Kidd once jumped over the Great Wall of China on a stunt bike, and in another famed stunt, he jumped 80 feet over a gap in a 50-foot high viaduct. His career took a tragic turn in 1996, when he suffered a devastating crash during a jump at a motorcycle rally in England. Kidd spent six weeks in a coma after the accident, and for a while afterward was confined to a wheelchair. Amazingly, he was eventually able to make a solid recovery, and after vowing to return to the world of bike racing, he made his comeback in the UK in June of 2007. 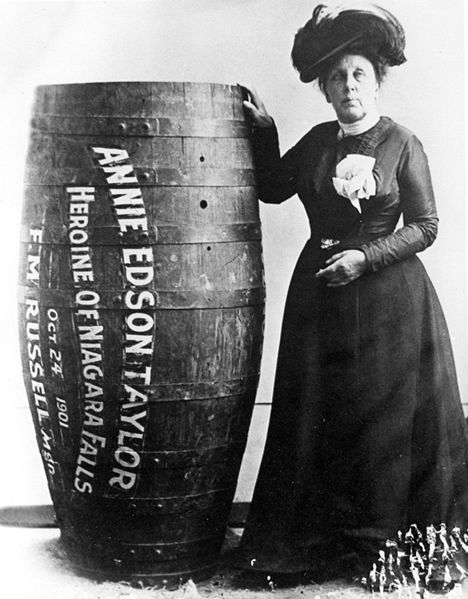 Photograph of en:Annie Edson Taylor, the first person who’d survived a trip over Niagara Falls in a barrel on 24 October 1901.

63-year-old Annie Edson Taylor became the first person to successfully go over Niagara Falls in 1901, when she took the plunge inside a wooden barrel. A schoolteacher by trade, Taylor had found herself in financial trouble, and conceived the stunt in the hope that it would gain her fame and fortune. She had a specially designed barrel filled with padding, and after testing it with an ordinary house cat, went over the Horseshoe Falls section of Niagara herself on October 24, 1901. Amazingly, she survived the 173-foot plunge with little more than a small gash on her head. Unfortunately, though, the stunt failed to garner Taylor the fame she had hoped for, and after making a small amount of money on a speaking tour, she spent her later years scraping by on money made from posing for souvenir photos.

Son of the iconic Evel Knievel, Robbie Knievel is a professional daredevil who has completed over 250 motorcycle jumps and broken at least 20 world records. Knievel began racing motorcycles at age 7, and was touring with his father by age 12. Like his dad, he has made a famous jump over the Grand Canyon, and his other stunts include jumping over a row of 15 trucks, hopping over 21 Hummers, and a televised 200 foot ramp to ramp jump in Las Vegas on New Year’s Eve 2008. Unlike his father, who rode a Harley Davidson, Knievel uses a specially designed Honda CR-500 for his jumps, for which he has received much criticism. In order to silence these detractors, Knievel has announced that in the summer of 2009 he will attempt to jump over 16 buses in Wembley Stadium while riding the same Harley XR-750 that was once used by his father.

Charles Blondin, AKA The Great Blondin, was a 19th century French acrobat and tightrope walker who gained fame in Europe and the United States for his daring high wire acts. Blondin started training to be an acrobat at age five, and by six he was already performing under the stage name “The Little Wonder.” In his twenties he was one of the most popular performers in Europe, but his crowning achievement came in 1859, when he traveled to the United States and became the first person to cross the 160-foot high gorge beneath Niagara Falls on a tightrope. Blondin easily walked the 1100 feet from one side of the gorge to the other on his first try. In a demonstration of his skill, he then did it several more times with a number of different variations, including being blindfolded, pushing a wheelbarrow, wearing stilts, and carrying a man on his back. In the most bizarre crossing of all, Blondin stopped halfway across the falls, sat down on the tightrope, and cooked and dined on an omelet.

Frenchman Alain Robert is a well known daredevil who helped pioneer the sport of “urban climbing” with his highly dangerous–and highly illegal–climbs up some of the world’s tallest skyscrapers, a practice that has earned him the nickname “French Spiderman.” Robert claims to have gotten his start scaling buildings at age 12, when he forgot the keys to his house and was forced to climb the outside of the building to get inside. Since then, he has made a name for himself both as a rock climber and for scaling over 85 structures and skyscrapers around the world, including the Eiffel Tower, the Sydney Opera House, the Sears Tower, and the Petronas Twin Towers. Robert makes every climb freehand, using only the natural architecture of the buildings to help him, and claims to have fallen seven times, twice from heights as high as fifty feet. Robert’s stunts are almost always unsanctioned by local authorities, and in nearly every case he is arrested upon reaching the top of the building he’s climbing.

A self-taught high wire artist, Philippe Petit is best known for walking a tight rope between the then newly constructed Twin Towers in 1974. Petit got his start as a street performer in Paris, but soon began to conceive of using his wire act as a kind of performance piece at famous world structures. He soon walked across a wire on the Sydney Harbor Bridge in Australia, and then between the towers of the Notre Dame de Paris. His crowning achievement came in 1974, when he engineered a wire act between the two World Trade Towers. Using falsified documents, assumed names, disguises, and months of planning, Petit and a small band of accomplices managed to bypass the building’s security to get to the top floor of one of the towers. They used a bow and arrow to fire the tight rope from one building to another, and after securing it, Petit proceeded to perform on the wire for 45 minutes before giving himself up to police. All charges against him were eventually dropped, and he was even asked to perform again in Central Park for the children of New York City.

Although he is best remembered as a magician, Harry Houdini was one of the original daredevils, and is responsible for pioneering many stunts that are still tried today. Houdini got his start as a small time magician and card trick performer, but he first came to prominence when he started experimenting with high profile escape acts on New York’s Coney Island. In his most famous stunts, Houdini would be placed in handcuffs and then locked in a crate or glass box, which was then lowered underwater. In some cases, these tricks would require him to hold his breath for more than 3 minutes. Other dangerous tricks included the so-called “Chinese Water Torture Cell,” and a now infamous trick where he was buried alive under six feet of earth and barely managed to escape with his life.

There is no daredevil more iconic or respected than motorcycle stunt jumper Evel Knievel, and for good reason. In a career that saw him suffer huge highs as well as many failures (and 37 broken bones), Knievel established himself an American folk hero, and his nationally televised motorcycle stunts remain among the most watched sporting events of all time. Knievel got his start as a motocross rider, but when in need of money he conceived the idea of performing stunts on his motorcycle. In his first jump, he hopped over a box full of rattlesnakes and two mountain lions, and he soon found sponsorship and became one of the first professional daredevils. Soon, Knievel was regularly jumping his Harley Davidson over rows of cars, trucks, and even the fountains at Caesar’s Palace. His most famous stunt came in 1974, when he attempted to jump the Snake River Canyon on a rocket-propelled motorcycle called the X-1. A malfunction caused the bike’s parachute to prematurely open and ruin the jump, but the media storm surrounding the event had already cemented Knievel’s reputation as the king of all daredevils, and he remained in the spotlight until his death in 2007.