Since the 1960s, the Etch-a-Sketch has been a toy staple for almost every child who has grown up in America. Those more familiar with the line of Etch-a-Sketches know that other versions have come out such as the Animator in 1986, a digital Etch-a-Sketch capable of storing 12 pictures; the Animator 2000 in 1988, which added computer games; the Etch-a-Sketch Color in 1993, which made six colors available for etching and sketching; and the Etch-A-Sketch Plug and Play Drawing System, where hand-held controllers and a television screen are used as your etch-a-sketch.

Although it has changed over the years to keep things fresh for its new target audience, the classic Etch-a-Sketch remains a crowd pleaser. It gave the artist infinite possibilities to create and astound their friends with a one-of-a-kind piece of artwork, no matter how complex. Who remembers how exciting it was to make something vaguely resembling a circle? I know I do! For me though, after about twenty minutes of making an empty jail cell and Christmas presents, I would get bored and find a less challenging toy, like a domino. However, for some this toy has captivated their imagination and ability to create beyond anything I could have ever imagined possible.

The iPad came out in April of 2010, a computer tablet advertised as being the new medium for entertainment multimedia such as books, movies, and games. As of September 30, 2010, 7.5 million of them have been sold around the globe. In addition to being what some might call an oversized handheld game system, the iPad is being used in productive ways by attorneys, medical professionals, college students, and even autistic children. Recently and amusingly, Carl Crawford’s agent distributed iPads to teams interested in hiring the baseball player that had clips highlighting Crawford’s playing ability preloaded onto the device. 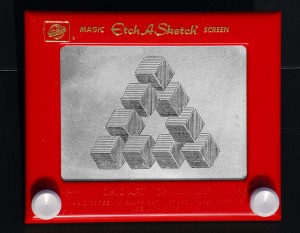 Simple shapes can often make for complex images, and the simplest thing to make on an Etch-a-Sketch by far is the line. The mechanics of the toy are simple enough.  Inside, the toy is filled with aluminum powder, which gives the screen its gray color. As you twist the knobs on the front of the toy that control the vertical and horizontal axes, a movable stylus removes the powder from the screen, leaving behind what looks like a black line but is actually the darkened inside of the toy. 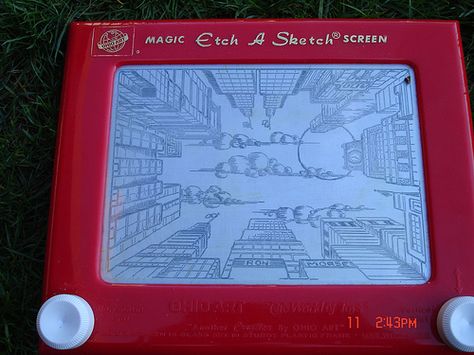 Out of all of the hundreds of Etch-a-Sketch pictures I looked at, this was the only one to have this kind of viewpoint. Many were skylines or a particular building if they were city related, but this one had the most unique perspective. For that reason, this sketch gets to be on the list. Also, I hope for the artist’s sake that they drew this from a picture or made it up, because to draw this from an actual model, their neck must have been incredibly sore after drawing this. 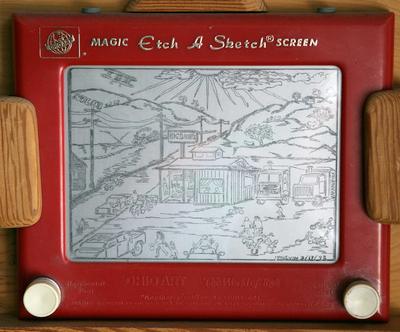 This very detailed landscape is currently on display in Niles, Fremont, California. I picked this one for its very close attention to detail towards the people and the background. The fact that they didn’t fill in the hills as being black, which I’ve seen a few landscape Etch-a-Sketches do, is impressive to me because they put that much more thought into planning the picture. I’m also rather fond of the sun rays and how straight are the diagonal lines.

First of all, this was the only Etch-a-Sketch I found that took up more than one screen so, kudos to the artist for thinking outside of the Etch-a-Sketch box! Second, her artwork was considered so good that Cedar Point actually wrote a blog article about the artist, an employee of the park at the time. Read more here: http://www.cedarpoint.com/public/fun/blog/2010/7/31/Etch_A_Coaster.cfm

Update: This blog article is no longer on the Cedar Point website, but here is a link to the artist Pikajane’s deviant art page. 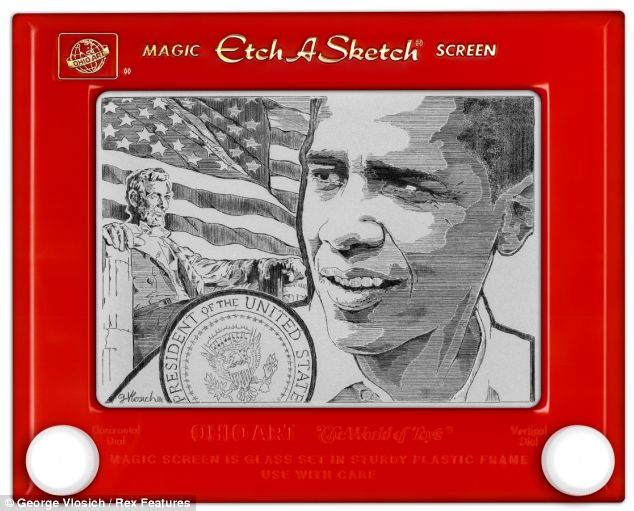 The face of newly sworn-in American President Barack Obama is a familiar sight on posters, T-shirts and badges – and it has now appeared on an Etch A Sketch too. The portrait was created by artist George Vlosich. The likeness took 80 hours to draw with two dials on a plastic frame – all sketched using one unbroken black line 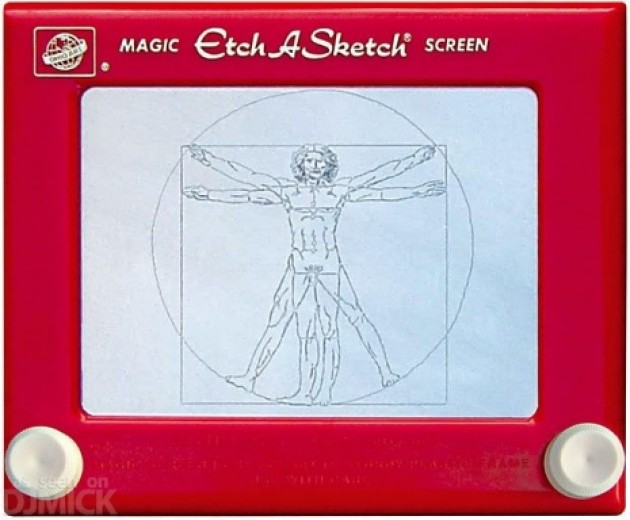 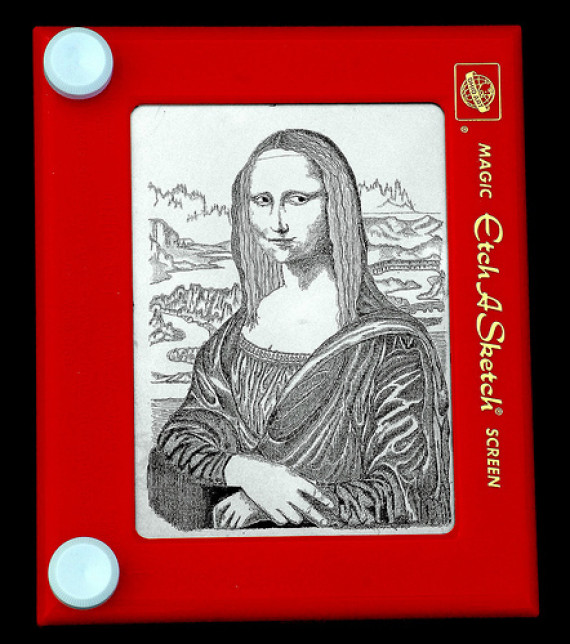 No art medium is complete without the Mona Lisa! Started in 1503 and finished in 1519, Leonardo da Vinci’s most famous work of art is captured here in an Etch-a-Sketch. In 2005, the sitter for the portrait was discovered at the University of Heidelberg to be Lisa del Giocondo. The portrait was a gift in celebration at the birth of her second son. The real Mona Lisa was stolen from its home in the Louvre in 1911 and was returned after a tour in Italy in 1913. Since then, it has suffered angry abuse from distraught onlookers, such as in 1956 when it was damaged with acid and later had a rock thrown at it, in 1974 when a woman attempted to spray paint it red, and in 2009 when another woman threw a mug at it. In 2005, it was enclosed behind bullet-proof glass in a climate controlled environment to ensure its survival for another 500 years. El Che was an Argentine Marxist revolutionary figure who, with the help of Raúl and Fidel Castro, succeeded in leading the Cuban Revolution. In addition to his work as a guerilla fighter and leader, he was also a physician, author, diplomat, and national bank president for Cuba and the instructional director for Cuba’s armed forces. He also trained the Cuban soldiers that fought at the Bay of Pigs Invasion and was responsible for the Soviet missiles in Cuba that caused the 1962 Cuban Missile Crisis. In 1999, he was listed in Time magazine as one of the 100 most influential people of the century.

This is a time lapse video of George Vlosich creating what he seems to think is his magnum opus, at least at the time of this video’s posting in September 2008.  In his own words: “The Chicago Cubs Etch features more players and detail then any work I’ve ever created. This piece took over 100 hours. I don’t usually say this but I think it is my best work to date. I’ve put more time and effort into this piece than any other Etch. Ever.” He has also done commemorative work in recognition of the Obama administration, Elvis, Michael Jackson, Allen Iverson, and the Beatles to name a few.