Yes, I realize this list contains some primates that are not monkeys, but Top 10 Famous Primates doesn’t sound nearly as fun as a barrel full of monkeys, I mean a top 10 list of famous monkeys. So take some time to monkey around and read a fun list of monkeys and other primates.

Bubbles The Chimp enjoyed the good life at Neverland Ranch, surrounded by amusement park rides and pampered by his master, Michael Jackson. Bubbles was often seen meandering around the ranch clad in a diaper, and Jackson has claimed that Bubbles actually performed work duties at Neverland, such as dusting and cleaning windows. Perhaps due to his strange living environment and his creepy master, Bubbles became very disturbed as he grew older, displaying fits of temper and even biting several visitors to Neverland Ranch: he was banished from Michael Jackson’s residence due to his misbehavior.

This classic cartoon character was created by Hanna-Barbara in 1975. Grape Ape was known for his intense purple hue and the bright green sweater he always wore. He was also known for his catchphrase, “Grape Ape, Grape Ape!” which he would repeat whenever another character spoke to him. He had a special sidekick, Beegle Beegle, who always traveled alongside him on his many adventures. Grape Ape sat on the top of a yellow car while Beegle Beegle drove him around.

8. Albert, The First Monkey In Space This rhesus monkey went into space on June 11, 1948, aboard a V2 rocket. Albert began his astronaut career after being launched from a base at White Sands, New Mexico, by the American space program. His flight ended in tragedy as he suffocated and died in the V-2 Blossom rocket. Albert was the first in a series of monkeys sent into space to test the safety of space travel for humans. Other monkeys also gave their lives in the name of science and space exploration: Albert IV survived a space flight in 1949. Unfortunately, Albert IV died on impact as the rocket landed.

This famous lowland gorilla was born on July 4, 1971, in San Francisco. Koko was a female gorilla who mastered over 2,000 words in American Sign Language, allowing her to communicate with humans in an astounding way. Some people felt that Koko was simply making signs without understanding their real meanings, in order to receive treats and rewards from her trainers.  Francine Patterson, who was adamant that her famous animal really understood ASL, and was able to conduct lucid exchanges using hand signs, trained Koko.

This charming monkey is known for his curious nature and his excited chatter. Curious George was brought from Africa by his caring master, The Man With The Yellow Hat, to live in the big city. Curious George is featured in a series of picture books written by Hans Augusto Rey and Margaret Rey. He has been a beloved cartoon character since his creation in 1941, entertaining countless children with his propensity for getting into trouble and mischief.

This ornery orangutan was featured in Clint Eastwood’s popular film, Every Which Way But Loose, and its sequel, Any Which Way You Can. Clint Eastwood’s character, Phil Beddoe, won the orangutan in a bet. Clyde got into the action in both films, punching villains and sticking his hand out of car windows to signal for a turn. Clyde died shortly after the sequel was filmed, reportedly after terrible abuse from his trainer.

Greg Evigan starred in this popular TV series, as a freelance trucker with a special friend – Bear, the chimpanzee. Bear’s real name was Sam, and he became protective of Greg Evigan during the filming of the show, trying to bite the actors who would “hit” Greg. Once in while, he would also challenge Greg himself, trying to prove his dominance. “Bear” was named after a football coach, Paul “Bear” Bryant , and accompanied BJ on his 18-wheeler transport truck as he battled crooked sheriffs and met attractive lady truckers on the road. 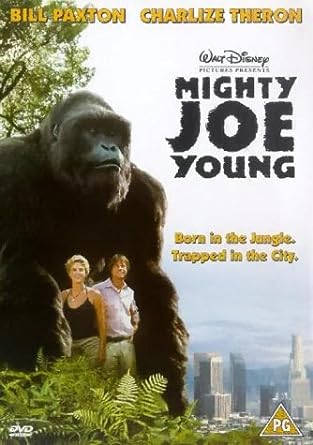 In this 1998 Disney film, Joe is raised by Charlize Theron’s character, Jill, who brings him to the United States. An evil poacher, who was also responsible for the death of Joe’s mother, and Jill’s mother, then threatens Joe’s life. Joe met a heroic end in the film while saving a child’s life at the Santa Monica pier, where he fell from a Ferris wheel: this implausible scenario led the film to be considered a disaster by some critics. Nonetheless, the family film grossed over fifty million dollars: unfortunately, the filming budget was a staggering 90 million.

Donkey Kong first arrived on the scene in 1981, along with Mario, in the incredibly successful Nintendo video game (Donkey Kong). He was created by Shigeru Miyamoto, and was voiced by famous comedian Soupy Sales. Players of this classic video game must jump and run to the top of the screen to get past Donkey Kong and rescue Pauline, the damsel in distress. In 1994, Donkey Kong received a makeover (complete with red tie) and resurfaced to great fanfare in the Gameboy version of Donkey Kong. This legendary gorilla has been capturing the public’s imagination since the original black and white film, King Kong, starring Fay Wray, was released in 1933. Since then, his capture from Skull Island and subsequent tragic romance with his human lady friend have been immortalized in remakes such as 2005’s King Kong, directed by Lord of The Ring’s filmmaker, Peter Jackson.  There have been seven films made about King Kong over the years, and King Kong Vs. Godzilla (1962), the third in a series of Japanese films about Godzilla, remains a cult classic today.