Halloween is upon us, and with it we see all the standard Halloween decorations and symbols – Jack O’ Lanterns, scarecrows, etc.  Did you ever wonder where these symbols come from?  When did Halloween actually start?  Why does it mean we have to buy candy, or dress up in costumes?  All your Halloween questions are about to be answered.

Halloween as we know it today bears little resemblance to either of the Roman harvest festivals it is loosely based on – the feast of Pomona and the festival of Parentalia.  Pomona celebrated the apple harvest, while Parentalia honored and placated the deceased spirits of the ancestors.  Skip on over to the Celtic regions, and you have the festival of Samhain, which translated means the end of summer.  The festival of Samhain celebrated the end of harvest, and the end of the “lighter” part of the year and the transition into the “darker” part of the year.  The celebrations were similar to that of Parentalia and other festivals of the dead, in that cleansing rituals were performed.  The Celtic festival of Samhain is mentioned in texts as old as the 10th century.

The name Halloween comes from the 1500’s, and is a variation on “All-Hallows-Even”, the night before All Saints Day, or All Hallows Day.  As with many things, the Catholic Church had a holiday to coincide with a pagan celebration.  To the Catholic’s credit, however, the Feast of All Saints was declared by Pope Gregory III (in the 700’s) and is talked about as early as 700 or 701.  By 835 under the guidance of Louis the Pius, the festival actually became a reality, and November 1 is the reported date of the Feast of All Saints, though some scholar contend that the original Feast of All Saints took place in April, and that the church changed it to coincide with the festival of Samhain to try to win the Celts over to Catholicism.

So what do witches, ghosts, goblins, and the like have to do with all this history?  Read on to find out.

10. Corn Husks and Stalks of Wheat The significance of corn husks and stalks of wheat is pretty straightforward.  Halloween comes in the autumn, the traditional festival of Samhain celebrated the end of summer and the end of the harvest, so these images are meant to represent the end of harvest and the beginning of winter.  Corn and wheat are symbols of agricultural change, and the change of the seasons.  Nothing very spooky about it, unless it’s a decoration on your “haunted hayride” or in a haunted house.  All in all, it is the one Halloween symbol that most clearly represents the pragmatic view of this controversial “holiday.”  End of summer = harvest = wheat and food to go around to make ready for winter.  See?  Easy.

9. The Colors Orange and Black Similar to #10, the colors orange and black are most likely further representations of the time of year, rather than any Halloween lore or mythology.  The color orange likely represents autumn, when the leaves change from green and orange pumpkins are ripe for the picking.  As mentioned earlier, the Celtic festival of Samhain marked the transition between “light” days and “dark” days – so the black likely represents those dark days of winter when there are fewer daylight hours to attend to the fields and crops.  Of course, the modern secular Halloween retailers have certainly pushed the orange-and-black as official colors of Halloween, so such an explanation seems weak, but it’s true.  What, you’d rather hear about the “mystical powers of the color orange?”

Sorry, to quote some movie somewhere, “orange is the new black.”  Or pink.  Or something. As we move more into the “spooky” tales of the Halloween symbol, we’ll start with spiders.  Go to a Halloween party and you’re sure to see fake spiderwebs spread all over the place.  Forgoing a discussion of any potential mystical qualities a spider might have (because, ew), it is significant that spiders weave webs, which has long been associated with the passing of time, progress, and fate.  OK, so maybe that’s a little mystical too.  All in all, though, the spider’s spinning of its web is a great natural representation of the cycle of life – a spider spins its web, bugs fly into the web, nourish the spider, etc.  Also, spiders like dusty, dark places, so in an abandoned house (a favorite visiting spot on Halloween) you’re bound to find plenty of spiders and spiderwebs. Bats are nocturnal creatures, so it’s natural that a celebration about the end of the light seasons and the beginning of the dark ones would incorporate them.  Additionally, in the old days Halloween meant big bonfires, which draw mosquitoes and moths, which would in turn draw bats, so bats were likely a common sight during the early Samhain festivals and later Halloween celebrations.  Those rational explanations aside, bats are sort of creepy, and certain groups thought that the little flying rodents were able to communicate with the dead.  How they would know is uncertain, considering the bats can’t communicate with US, but whatever.  Also, once vampire legends made their way into Halloween folklore, the position of the bat was set – since it was thought that vampires could transform into bats.  PLUS, witch hunters were pretty sure that witches could transform into creepy creatures like black cats, bats, and spiders, so there’s that, AND there are vampire bats who only feed on blood.  All those things put together might make bats the most Halloweeny things ever. OK, so while Halloween started out to be about the end of harvest, etc., there are some ancient cultures who also believed that, on Halloween night, the veil between the living world and the spirit world was, if not lifted entirely, at least a little thinner.  Ancient Celtic religions taught that cats were reincarnated souls of humans, and that they were able to see the future.  Also, it was thought (as mentioned earlier) that witches could turn into cats.  Even those who thought that was fantastical believed cats to be the “familiar” of witches.  Truth be told, most single ladies were though to be witches, and, just like today, many of the single ladies had cats.  So, in the 1600’s or so, the local cat lady would have probably been tried for witchcraft.

In the 1600’s and 1700’s several different cultures would hold a bonfire in June on St. John’s Eve and they’d throw cats into said bonfire.  King Louis XIV forbade the practice, but the French villages kept doing it for more than a hundred years after the practice was abolished.  Thus is the superstitious power of the cat. Back to that whole “night where the line is blurred between the living and the dead thing,” skeletons are an oft-seen Halloween symbol for that reason.  The skull, in particular, is a symbol used by many different cultures to represent either the brevity of human mortality, the fear of death, or danger that can result in death.  Think about the Jolly Roger symbol on pirate ships – it was there to threaten other ships into surrendering without a fight.  In other religions, skulls feature on the necklace of Hindu goddess Kali, over the head of Tama, Buddhist Lord of Death, and the list goes on.  The Druids and the Celts believed that the skull was the “psychic seat” of the human soul.  All in all, skulls and skeletons are associated with Halloween because they represent the end of the physical part of life, something that is connected to Halloween both because of the death of the “light” seasons and because of the perceived connection to the spirit realm. Since Samhain not only celebrated the end of harvest, but also those had passed into the next “realm,” it is called by some a “festival of the dead.”  The idea of ghosts plays into this idea that Halloween night is the one night that the spirits of the ancestors are able to walk among the living.  Plus, they’re spooky.  Ghosts!  Oooooh. 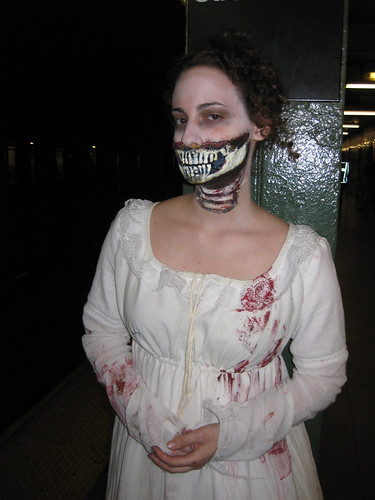 Speaking of ghosts, what is Halloween without costumes?  Back in Celtic times, celebrators of Samhain would wear costumes in order to treat the roaming spirits of the dead.  It was thought that if you could trick the spirit, the spirit would refrain from bothering you about pesky things like tributes and respect.  On a night that the “veil” between the spirit world and the natural world was so thin, it’s best to pretend to be someone else.  “Look busy,” if you will.  In the early 20th century, Americans started wearing costumes for Halloween, which was celebrated but not with the Celtic beliefs in mind (at least, not for everybody).  In the 1950’s, trick-or treating became all the rage in the United States (can you believe it was that late?) but it actually started out in Great Britain and Ireland as something called “Souling,” As far back as the Middle Ages, poor children would go door to door collecting handouts in return for their prayers for the dead.  They were called “guisers.” Now it’s just about looking as scary or slutty as possible.  Ah, progress. 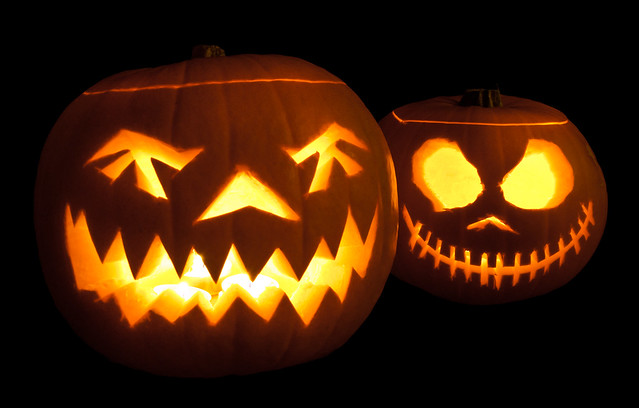 Originally, the aforementioned “guisers” would carry hollowed-out turnips with candles inside them to light their way from house to house to beg and pray.  Eventually, the tradition changed to carving pumpkins, and Jack-o-Lanterns as we know them were born.  One legend sticks out above all others in regards to the Jack-o-lantern tradition.  An Irishman named “Stingy Jack” was a drunk and a prankster, and he managed to make both God and the Devil angry.  He died, and neither heaven nor hell wanted him, so he was stuck wandering around on earth.  He carried a turnip, hollowed out, with a candle inside, to light his way, and to keep him from knocking on their door, the Irish would carve scary jack-o-lanterns to put around their houses to keep him away.  Or, so they believed, and a tradition was born. What’s the go-to Halloween costume for most little girls?  Oh right – some Disney princess.  What  WAS the go-to Halloween costume for little girls until about 10 years ago?  Witch!  What’s the go-to costume for most female people who get talked into dressing up for their office’s Halloween party?  Witch!  What’s the central subject of most Halloween movies?  Unkillable serial killers and mass murderers!  Different than witches!  Though, if you talk to someone from, say, the Salem Witch Trail era, the difference was not so great.  Witches were feared, and it was believed that their “powers” were at their greatest on Halloween night.  It was thought that witches were in league with the devil, and that meant burnings at the stake, dunkings, and worse for women who had never so much as touched a cauldron or a broomstick.  Still, the image of a witch riding her broomstick across a full moon is one of the most traditional Halloween symbols or images today.