Back in the day when comics weren’t the big business they are today you only had a few underpaid and overworked people pushing out a large number of comic books every month. And those overworked employees and freelancers did an incredible job of laying the groundwork for the high quality of comic books we have today. But, because of deadlines (they actually met) and not enough eyes to look at every comic, mistakes were going to be made and you have some wonderful bloopers. And while DC comics has their share, I’m more of a Marvel fan and have focused on their bloopers. Read the top ten Marvel comic book bloopers and have a laugh.

Okay, I’m not a picker of nits and I realize comic books aren’t the place to find factual stories that are based on truth. I also know a man can fly, breathe water, survive in space, shoot beams from his eyes and a hundred other powers which are described in the comic books, but the idea of pulling Manhattan is so absurd it must start the list of comic book bloopers by Marvel. And just what is the chain connected to on the island? The only “bigger” blatant disregard of physics I’ve found in comics is the defiance of gravity so many females are capable of with their bosoms.

Jean Grey telekinetically “hands” Hank a screwdriver but then calls it a pair of pliers. Hank decrees she is a “credit to her gender”. I guess Hank knew he didn’t have a shot at dating Marvel Girl, so an innocent jab at her and the entire female gender seems to have been in order.

I guess the writer, Roy Thomas, was mighty hungry when writing for this issue of Savage Sword of Conan. Or else the letterer was working at the local coffee shop. Either way, the “little hussy Murelia” better bring him his blue plate special fast after he calls her a waitress (see green text).

7. The Grim Reaper, give him a hand. No wait, he has an extra already.

Luckily the grim reaper was able pull down his mask with his prosthetic hand before quickly replacing it with his metal scythe. Who knew he had so many attachments. Thankfully this has prevented any bathroom accidents.

6. Two left hands, no wonder he is so fantastic. 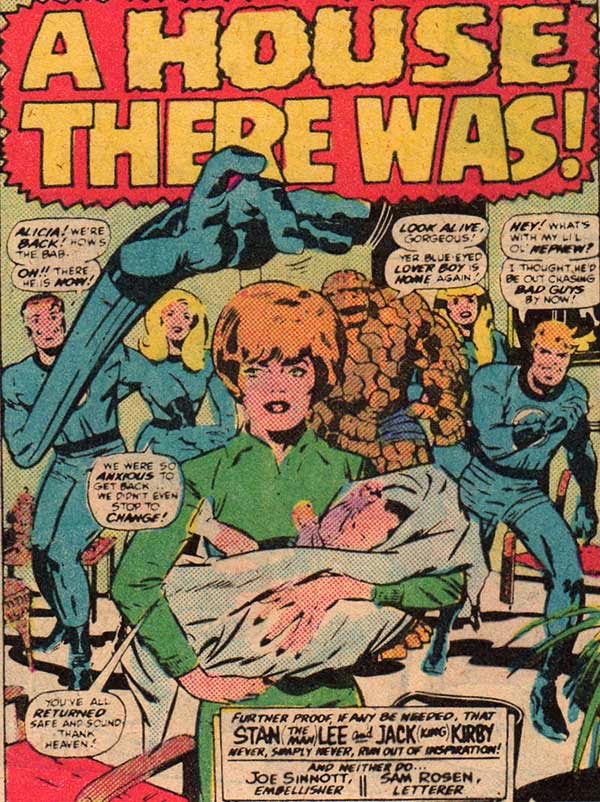 I guess Reed Richards, Mr. Fantastic, isn’t satisfied with just scaring the crap out of Alicia Masters by tapping her on the head, he reinforces the shock by using a second left hand? Keep the baby away, Alicia! 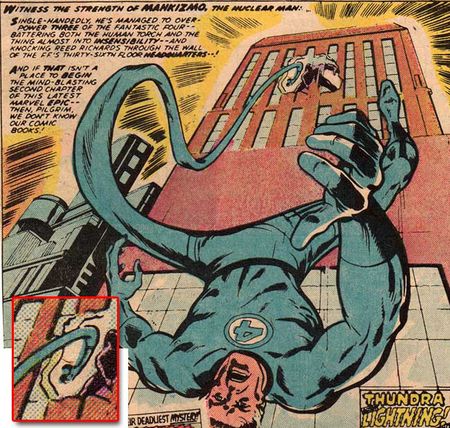 Apparently Mr. Fantastic is always the joker. After permanently scarring his child and Alicia Masters (see above) he now decides it would be funny to have two right hands…and a left hand. Check out the hand that should be a left foot, high up in the window. I have zoomed in for a closeup in the bottom left of the picture. Not only was a hand drawn in place of the foot, but a right hand was used for a left foot! The atrocities continue.

4. I can’t see a thing with this damn eye patch.

Captain Barracuda is obviously seeking attention for his disability or else he was too embarrassed to admit his mistake. Trying to look through the periscope with the eye covered by his patch is probably a desperate cry for help.

Does Stan Lee really call Peter Parker, Peter Palmer? Yep, he sure does and thank the Marvel gods he got it right later. Cut Stan some slack it was only the second issue Peter had appeared in. But, can you imagine trying to root for a guy named Peter Palmer? Maybe we got the wrong guy after all. I mean with all the clone stories, maybe there really is a Peter Palmer out there biding his time.

2. Captain America knows when to give up…

Captain America admits defeat before the fight even starts. Our only guess at his lack of confidence was some kind of attempt at reverse psychology. I guess that is why he is a fighter and not a thinker.

Okay, wow! Could there have been a bigger blunder than for Doc Ock to call Spider-Man, Super-man? I mean, where were the army of DC lawyers to sue Marvel and shut down Amazing Spider-Man? They could have prevented the atrocious Clone stories and the even more despicable “One More Day” storyline from Spider-Man. Of course, we would have also lost a host of great Spider-Man stories as well.

Maybe those over-sized glasses are covering a severe vision problem and he only saw the red and blue colors and made an honest mistake.

Do you disagree with this list of Marvel comic book bloopers? Make a comment below or send us your own list. Got a list of DC comic bloopers? We’d love to see it. These were sourced from Marvel’s No-Prize Book.