Since becoming a Disneyfied playground for tourists, Broadway has become a barren land of film and cartoon adaptations; all created with the sole purpose of selling tickets and nothing more. At one point, producers took chances on Broadway shows, no matter how odd or outrageous the subject matter.  Productions still flop, however they tend to be fewer and far between. As production costs rise higher and higher and taste levels get blander and blander, the strange productions that once peppered the Broadway scene have become a thing of the past. Here is the Top 10 List of Odd Musicals to Run on Broadway.

Written by George Kleinsinger (the man behind ‘Tubby the Tuba’), Joe Darion, and Mel Brooks (the man behind Blazing Saddles, Young Frankenstein, et al); men who all thought it a good idea to bring a concept album entitled archy & mehitabel (lowercase intended) to life on stage. Based on Don Marquis’ New York Tribune columns about a lovelorn cockroach and his feline friends, the show featured large outlandish setpieces (gigantic balls of yarn and the like) and a cast that included Eddie Bracken, Erik Rhodes, and Eartha Kitt (an outlandish setpiece herself). After running a meager 49 performances the work was slightly abridged for a television broadcast and then adapted for the silver screen by Allied Artists as an animated feature.

Written by Sammy Fain and E.Y. Harburg (the man behind the lyrics for the songs in MGM’s The Wizard of Oz); Flahooley concerned the story of a toy tycoon who receives a magic lamp from an Arabian Princess (not kidding) with pleas to repair it, as her country’s oil production had ceased without it. The tycoon asks his best inventor to re-animate the lamp, which he does so with the rub of a hand of his newest creation, a doll that laughs when you shake her (shades of Tickle Me Elmo). Throw in a genie that saves the day and decides to move to New York to give things to children full-time (absolutely not kidding) you have the plot. Starring Barbara Cook, Peruvian songstress (and oddity) Yma Sumac, and the Bil Baird Marionettes, Flahooley lasted only 40 performances.

Written by George O’Dowd (The Culture Club’s Boy George) and based on his life during the 1980’s New Romantic Scene, Taboo started as a wildly popular musical in London, even winning a prestigious Olivier Award for one of its performers. Talk show host Rosie O’Donnell happened to see this production and decided to produce it on Broadway. It was then decided that the score should be slightly altered as well as an entirely new book crafted by legendary drag performer Charles Busch. Housed in the cavernous Plymouth Theatre, what was once an intimate evening with fantastic tunes became an over-directed pageant of costumes and odd Sweeney Todd-esque girder sets, the production closed after 100 performances. The show remains popular in London where in September of 2012 it was revived in the Brixton Clubhouse.

Originally titled Kronborg: 1582, Rockabye Hamlet started life in Canada as a radio production written by Cliff Jones. Based on Shakespeare’s original texts (for the most part), the show utilized rock, pop, and sprinkling of country styles to illustrate the story of the besotted Danish prince. After touring through Canada with a new Ophelia played by none other than Beverly D’Angelo, the production was optioned for Broadway and staged as a rock concert by Gower Champion (the man who had directed the original productions of Bye Bye Birdie and Hello, Dolly!). With such lyrics as ‘Good son, you return to France/Keep your divinity in your pants’ the production was dismissed by almost every critic in New York and closed after 7 performances. To this day Jones has continued touring a revised version of his show throughout Canadian schools.

The odd (yet true) story of the Kaifeng Jewish people seems an ideal subject for a major American musical, right? RIGHT?! In the 10th Century a population of Jewish people traveled to Kaifeng and became assimilated into Chinese society, a small community still exists to this day. Mitch Leigh (the composer of Broadway smash hit Man of La Mancha) thought this a perfect Broadway vehicle. Originally planned for a Broadway opening in 1966, the try-out production was set upon by critics (while legendary star Molly Picon walked away from her contract) labeling it ‘The King and Oy’ and it never made it to New York. In 1986 the production was finally mounted on Broadway, utilizing the traditional trappings of Chinese theatre (oddly also including Sumo Wresting, which is not, incidentally, Chinese) and promptly, again, getting savaged by critics. The production closed after 68 performances and has yet to turn up regionally.

Based on Roman Polanki’s film The Fearless Vampire Killers, Dance of the Vampires began its life as a German rock opera written by Jim Steinman (composer of Meatloaf’s ‘Bat Out of Hell’ album and Bonnie Tyler’s ‘Total Eclipse of the Heart’). The production premiered in Vienna in 1997 under Polanki’s direction, garnered three IMAGE Awards, and went on to have 15 (count ‘em!) major revivals in Europe and Japan since. That brings us to the Broadway production. To bring the show stateside, the opera was cut to include a new book by David Ives (eliminating its status as an opera) with a more comedic storyline dictated by its new star, Michael Crawford of Phantom of the Opera fame. The production became a long-running joke in the theatre community with petty jabs being thrown from the creative staff to the production staff to the performers and back to the creative staff. Steinman was eventually fired from HIS OWN PRODUCTION and later wrote on his blog that ‘DOTV was utter shit’ and that his music was wasted. It closed after 56 performances and lost over 12 million dollars for the producers.

4. Rachael Lily Rosenbloom (And Don’t You Ever Forget It) (The Broadhurst Theatre, 1973)

Written by Paul Jabara (who would later win an Academy Award for his song ‘Last Dance’) and Tom Eyen (who would go on to pen the book and lyrics for Dreamgirls) as a vehicle for Bette Midler, Rachael Lily proved that Broadway was NEVER ready for disco. After Midler passed, the title role of ‘Hollywood gossip columnist who returns to her roots’ was bestowed upon Ellen Greene (who would later find fame in the off-Broadway, London, and film versions of Little Shop of Horrors as Audrey). The production consistently sold-out upon going into previews (many patrons attending numerous performances and learning all the songs); but word of mouth between critics and the New York in-set who were secretly attending ultimately doomed the show to never officially open at all. It closed after 8 previews.

Written by Galt MacDermott (composer of Hair), audiences found this production (originally entitled Up!) so confusing that a synopsis of the plot had to be inserted into playbills early in the run. The plot (of which there was little) concerned itself with the trials and tribulations of a set of transients who are living on an asteroid 1,000 years in the future (got that so far?). The weightlessness of the asteroid was accomplished on stage through the use of six cleverly disguised trampolines. The overall pageantry was not enough to save the production from ridicule, it eventually folded after 16 performances. Via Galactica also had the distinction of being the first show produced in the state of the art Uris Theatre (now named the Gershwin, the Broadway home of Wicked).

Johnny Gruelle’s charming stories about a tough little rag dolly and her brother seemed a perfectly rational idea for a children’s musical. Originally mounted as an animated film directed by Richard Williams (who would later win an Academy Award for Who Framed Roger Rabbit?); many critics cited the terrifying images drawn by Williams and his crew as the reason for the film’s failure (to this day it has not been officially released in the DVD format). This seems an absolutely WONDERFUL production for the stage, no? The composer of the film’s songs, Sesame Street’s Joe Raposo, expanded his score and told the story of Raggedy Ann and friends traveling on an adventure to find her owner, sickly Marcella, a new heart (Adorable!). Along the way they run into Marcella’s mother attempting to commit suicide in a forest of skeletons (So cute!), and narrowly escape the clutches of General Doom who wants to marry little Marcella (So heartwarming!). In the end, the show’s vicious images could not even save it as an oddity and it closed after 5 performances. 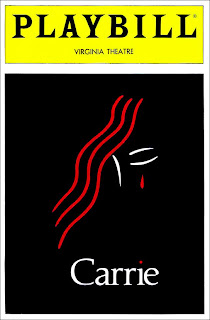 Long considered the mother of all weirdness on Broadway, Carrie found its place in history by being, at the time, the most expensive Broadway flop ever. Written by the Academy Award winning composers of Fame, the production had an auspicious beginning. Originally starring Broadway grand dame Barbara Cook as Margaret White, the show was produced in London by The Royal Shakespeare Company. Before coming to Broadway, Cook would decline the transfer after nearly being decapitated by the set during the finale. Once in the US, the production was mounted with a mix of British and American actors, Betty Buckley (Miss Gardener in the film version of Carrie) would take over for Cook.

What can only be described as a mix of Grand Guignol operatic fireworks and clunky teen-angst drama, Carrie limped into the Virginia to unanimous negative reviews and closed after 5 performances. To its credit, however, the show sold to full houses throughout its run with many patrons returning multiple times. A popular bootleg of this production is still in circulation among collectors. A recent off-Broadway revival of a re-tooled Carrie premiered in 2012 with many critics complaining that the new version lacked the heart and grandiose sensibilities of the original production. Ironic.

You can buy tickets to the theatre’s latest production: