There’s an old saying that goes, “home is where the heart is.” This statement, profound in and of itself, becomes even more noteworthy when one considers the curious love affair America has with the state of New Jersey. Folks just love Jersey and can’t seem to get enough of the Garden State. With this phenomenon in mind, we switch gears from our previous TopTenz topics of reasons NOT to live in particular locations (California and New York, respectively) and instead focus on a place a whole lot of people call home: New Jersey baby! (My deepest apologies to the folks of North and South Dakota – your slice of paradise was MY choice – unfortunately, no one really knows where the Dakotas are). So, without further delay, here are the top ten reasons to make New Jersey home sweet home:

We mention elsewhere in this list that New Jersey is one of the smallest states (in area), but has a population that belies its size. All of those folks need to be able to get to and from the places they go. Not surprisingly, this has resulted in Jersey being the home of the largest (and most dense) system of highways and railroads. If you need to get somewhere, there’s a highway that will take you if you’re moving through New Jersey. Part of this, no doubt, lies in being a connection between two major metropolitan centers (Philadelphia and New York City). Coincidentally, as a result of all of these vehicles that are being put to use, Jersey is also vehicle theft capital – of the world! So, while you might be able to easily travel from one destination to the next, you might have a little trouble returning when you find your car is missing. But hey, that’s a minor point. Though, in another interesting twist of ‘action reaction’, Jersey also happens to have the highest cost for auto insurance. Go figure.

One will get the impression that New Jersey is made up primarily of Italian Americans (this notion being conveyed through all the various images dealing with Jersey – see entry #2). True enough, those of Italian descent do make up a sizeable block in the state (about 25%). However, African Americans and Latinos also comprise healthy blocks of ethnicity in the state. Along with such racial diversity, we also find an appreciative religious one as well. New Jersey has the second largest Jewish and Muslim populations in the country. What’s more enlightening is that for the most part, these various groups of folks get along with one another. Whether it’s in the water or just the culture of the state (which seems to place a strong emphasis on family and related values), Jersey seems to have something going on that a few other states could benefit by emulating.

8. Fun Times for All The best time to see the falls is after a rainfall. On the day before this visit, there was a big rainstorm and the next day, the falls displayed beautiful rainbows.

Most of us take vacations to get away from the places where we live. In New Jersey, you don’t really have any reason to leave whatsoever. With over 50 resort cities and towns, Jersey is a vacation destination in and of itself. Realistically, one only has to step out their door and a number of entertainment destinations are available. There’s the picturesque Cape Mag or the fun times of the east coast version of Sin City

: Atlantic City. The folks of New Jersey know how to enjoy themselves and this is reflected by the extravagance and variety of options that one can find in the state.

An interesting fact about New Jersey is that it is the largest chemical producing state. Including pharmaceuticals (the legal kind of drugs, not the recreational variety), Jersey is home to all kinds of chemical producing entities. This, of course, means jobs for those individuals who work in this field (which probably dovetails well with the fact that Jersey has the highest ratio of scientists and engineers than any other state). Further, it explains why Jersey also has the highest number of toxic waste dumps. I mean, heck, you got to have somewhere to dump your toxic waste; right? Well, with over 180 such dumps, Jersey is awash with places to dump your green slime. Between drugs and the places you dump the leftovers from making them, Jersey is on the high end in the use of progressive technologies (like nuclear power, that amounts to over half of the power that is generated in Jersey). Hmmm… Toxic chemicals, nuclear radiation, this might explain a few things about these people… 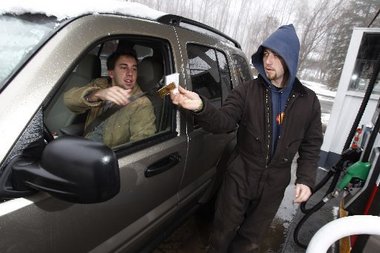 If you are younger than 40, then you probably don’t have the slightest idea what a full service gas station is. Ah yes,… I fondly remember the old days when you could pull up to a gas station and an attendant would come out, wash your windows and pump your gas. You didn’t have to do anything more than hand the fellow the cash for the gas and drive off. That all changed in the 80s as full service transitioned into self service. Not in Jersey. In something that is akin to falling into a time warp, self service is actually against the law in New Jersey. If you have to refill, then someone is going to come out to your vehicle and do it for you. Heck, this perk alone is almost reason enough to want to live in New Jersey. Who wants to really pump their own gas? There are those noxious fumes that get into everything, not to mention the inconvenience of having to get out of your car (especially when it’s cold). Plus, it means jobs for a lot of folks. It’s a win-win situation that only New Jersey and Oregon (the only other state that does this) have figured out.

If you live in a rural area, you are familiar with the headache of having to travel a good distance to get to a shopping mall. Even in many urban areas, shopping malls and the like are at a premium; you still might have to travel around a bit to find what appeals to you. Not so in New Jersey. There are more shopping malls (and diners) per sq mile than any other locale in the United States. Man, you can’t move in New Jersey without running into the stores that are looking for you to drop some money on the counter. One supposes this is not surprising considering the dense population in Jersey. All these people have needs. And make no mistake about it, those needs are met. Take the borough of Paramus for example. Boasting 4 large malls, this area generates $5 billion in annual sales. That’s a lot of shoes…

4. The Mob lives there

Now this might sound like a bad thing, but not really. See, the mob works in New York. But when they are done extorting, running numbers, and whacking; they have to have somewhere to relax and put their feet up like anyone else. That place, of course, is New Jersey. The plus in this is that no one wants to bring their work home with them, so they leave a lot of their more nefarious activity on the other side of the state border. Chances are that if you live next to a mobster, your neighborhood is going to be fairly safe and peaceful (notwithstanding the occasional cable TV van that is constantly seen parked with the antenna sticking out and guys wearing dark glasses sitting in it). Mob guys like John Riggi (the so-called mafia gentlemen), Anthony “little pussy” Russo, Sam “the plumber” DeCavlcante and others called Jersey home. And, as proof that ‘truth is stranger than fiction’, an episode of the Sopranos was ripped right out of the annals of Jersey mob life. Back in 2002, a number of mob guys were due to get out of prison within an 18 month period, creating a literal flood of button men on the streets at one time. But really, where else would they go? You get out of prison and you go…home.

3. The Rich and Famous Call it Home

Or rather, they used to. Believe it or not there are a lot of famous folks that hail from Jersey. Maybe it’s in the water or something, but if you can make a claim of being from the Garden State, you just may have a better chance than most to make it big in entertainment. This list of folks we know and love that were born and/or raised in the Garden State reads like who’s who list of the rich and famous: Jason Alexander, Supreme court justices Samuel Alito and William Brennan, Count Basie, Jon Bon Jovi, Valerie Cruz, Danny Devito, Michael Douglas, James Avery, Regina Bella to just name a few. There are a slew of professional athletes that can trace their lineage back to Jersey. With such prestigious pedigree of talent, it’s not a stretch to say that Jersey living bodes well for some degree of success in life. Indeed, with median income of $70,000 annually per household across the state, Jersey leads the nation.

Everybody loves Jersey. This is evident by the spate of reality TV shows that are centered around and/or about folks in New Jersey. We just can’t get enough of these interesting people that occupy a portion of our eastern seaboard. As a result, we can’t turn on our TV without seeing one of those folks with the east coast nasal twang going about their wacky lives. In fact, your claim to fame does not have to include a stint in LA any longer. Nope, you just have to hop a train to Jersey (and being loud and obnoxious doesn’t hurt either). Just check out the reality TV landscape: We have Snookie (reason enough to want to live in Jersey) and company on Jersey Shore; there’s Jerseylicious (a cool name indeed) about all too real drama that takes place at beauty salons; Real House Wives of New Jersey, the reality TV soap that is soooo much better than the one in New York; and Cake Boss, the delectable show about pastry and cakes in Hoboken. Next up, a show returning for its second season titled Jersey Couture, which follows the craziness that takes place in a family owned dress shop. I repeat: we just can’t get enough of life in New Jersey. Really.

We have previously dealt with the travails of residing in New York. Obviously, given an alternative, sound minded folks who find it necessary to maintain employment in New York might choose to live elsewhere. Why deal with issues like traffic congestion and rampant crime, when the neighboring state of New Jersey offers a more tranquil and peaceful environment. Sure, being couched between (sorta) Pennsylvania and New York (or more specifically Philadelphia and New York City) has relegated New Jersey to the role of the middle step child. But as we have shown, believe me – well consider that the latest census data counted 8,791,894 people living in New Jersey. Unfortunately, New Jersey happens to be one of the smallest states (47th) in the union, measuring out to just over 8,000 sq miles. That’s a lot of folks crammed in. But – hey, they’re happy and that’s all that really counts.