When you think about basketball players, you probably think of a taller-than-average man who is strong, fast, and able to make a slam dunk with no problem. However, this isn’t always so. Even though the average height in basketball is about 6’7, there have been players and the past, and even in today’s world, that are much shorter than 6’7. Many of these players have been recognized not only for being short, but doing moves and plays that tall players can’t do. Most of these players are able run faster, quicker, and jump even higher than those who are tall. Below is a list of the 10 shortest basketball players to ever play the game. To put it easily, short men can jump! 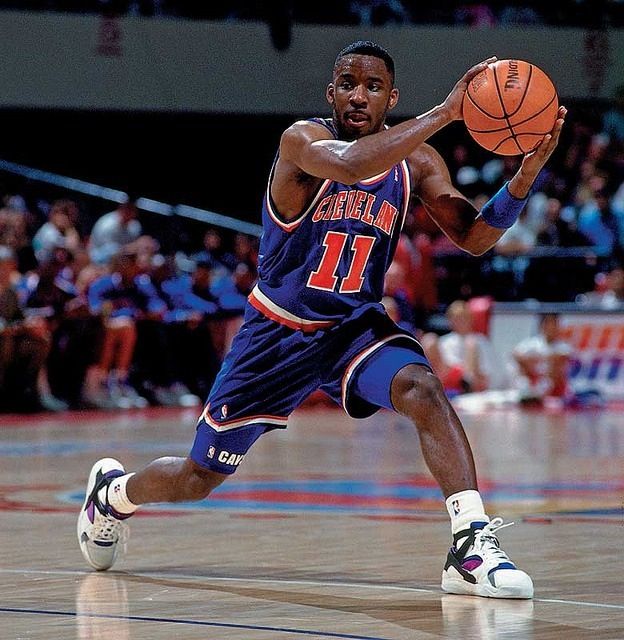 After attending the University of Oregon, Terrell Brandon was picked 11th total in the 1991 NBA Draft. The Cleveland Cavaliers drafted him onto their team and he played for six years as a point guard. He was picked to play in the NBA All-Star Game in both 1996 and 1997 and was called “The Best Point Guard in the NBA” in Sports Illustrated in 1997. The same year Brandon was given the NBA Sportsmanship Award. After playing on the Cavaliers, he decided to leave and play for the Milwaukee Bucks and was then traded to play for the Minnesota Timberwolves. Sadly, Brandon became highly susceptible to injuries and in 2002 he was placed on the injured list and never returned to playing on the court. 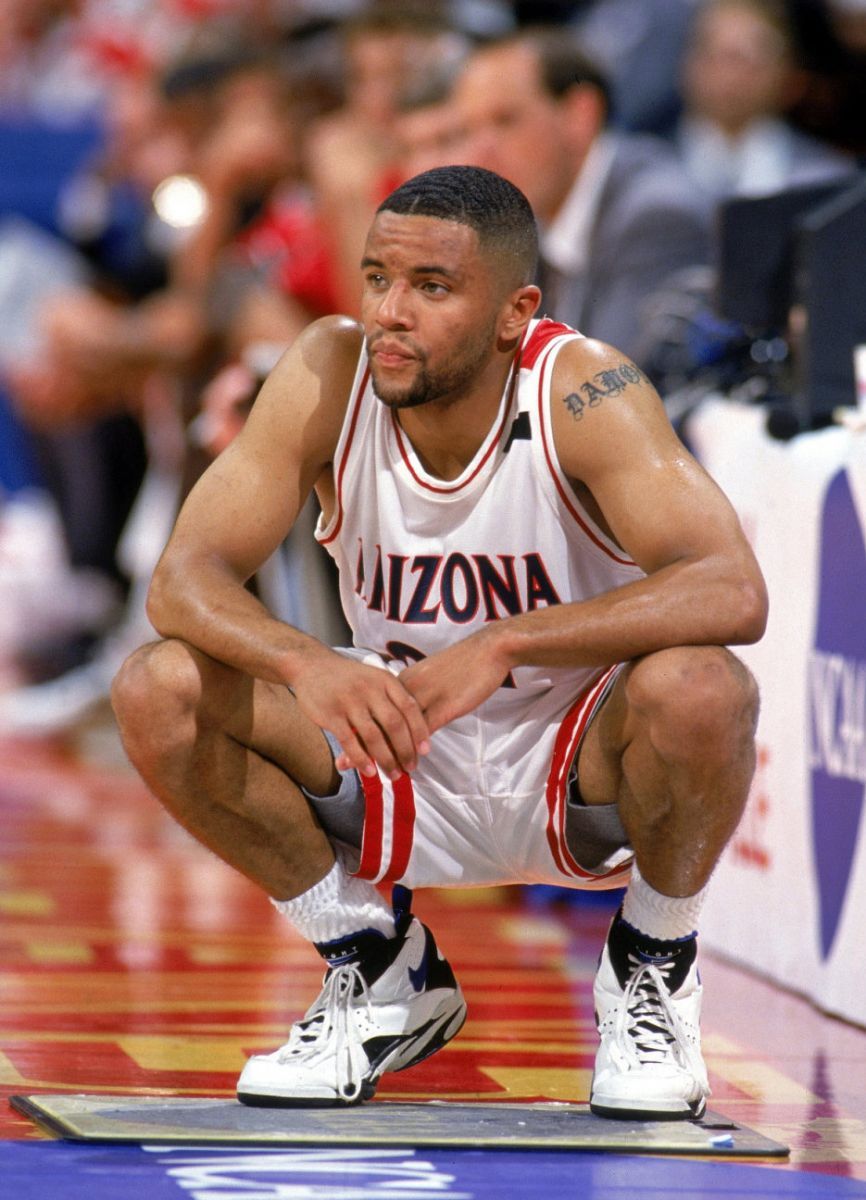 Damon Stoudamire was first brought into the NBA scene by the Toronto Raptors. After being picked 7th overall in the 1995 NBA Draft, he was able to set his feet on the court and start his career. In 1995 and 1996, he was awarded the NBA Rookie of the Year Award, scoring an average 19 points per game, and has since allowed his career to flourish. In February 1998, he was traded to the Portland Trail Blazers and his stats didn’t stay as high as they were with the Grizzlies, and he was sadly usually benched during the 2001-2002 season. However, he was able to play a lot in the playoffs. Eventually his career took off again and he scored a franchise record of 54 points against the Hornets. After being traded again he went back to play for the Grizzlies in 2005 but tore his patellar tendon and had to miss the season. He was again traded off and settled a deal with the San Antonio Spurs in 2008. Today, Stoudamire is part of the coaching team for the Memphis Grizzlies. 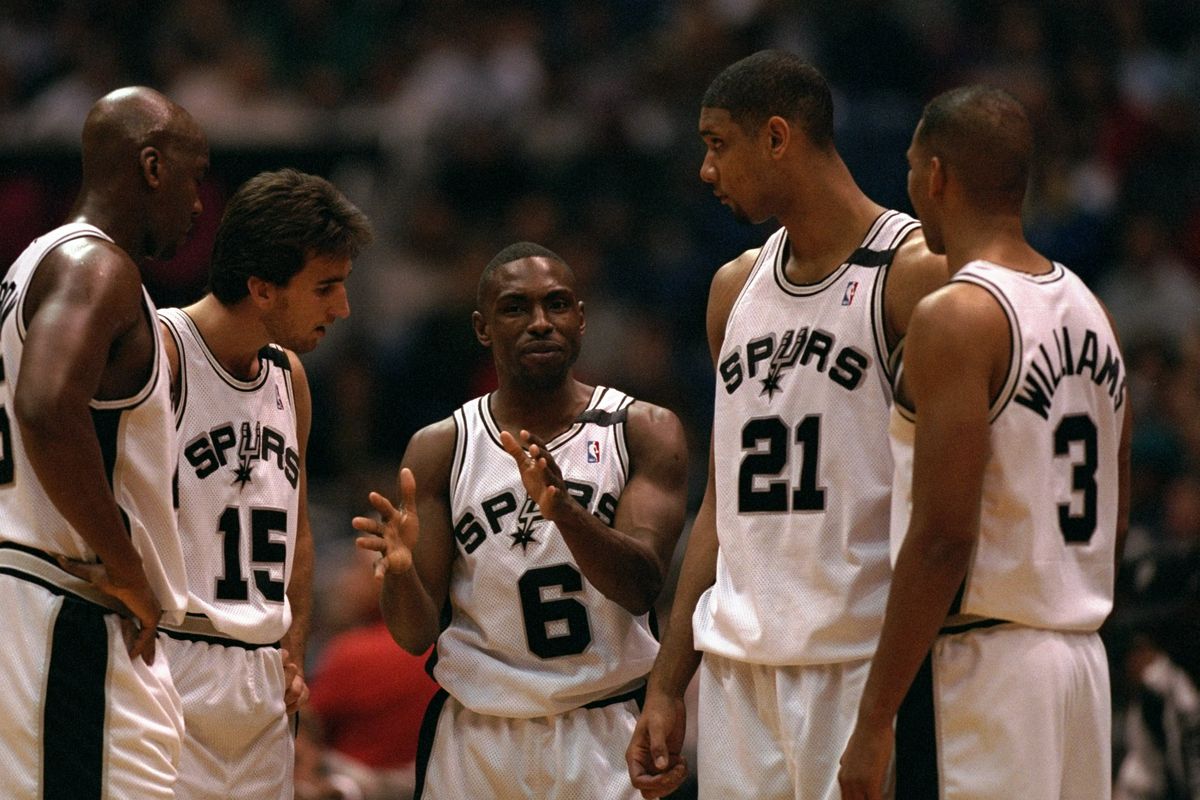 Johnson, after graduating in 1988, wasn’t picked to go into the NBA Draft. After playing for the USBL Palm Beach Stingrays, Johnson was signed by the Seattle SuperSonics and played a total of 16 years within the NBA. He also played for teams including the Denver Nuggets, Houston Rockets, Golden State Warriors, and the Dallas Mavericks. He is most popularly known for his seasons with the San Antonio Spurs. He is best known for his help in winning the 1999 NBA Championship against the New York Knicks after scoring a last shot in Game 5. The Spurs eventually retired Johnson’s number in 2007 and was most recently inducted into the San Antonio Sports Hall of Fame on February 20, 2009. Besides being an NBA player, Johnson also coached the Dallas Mavericks to the NBA finals and now is basketball analyst for ESPN. 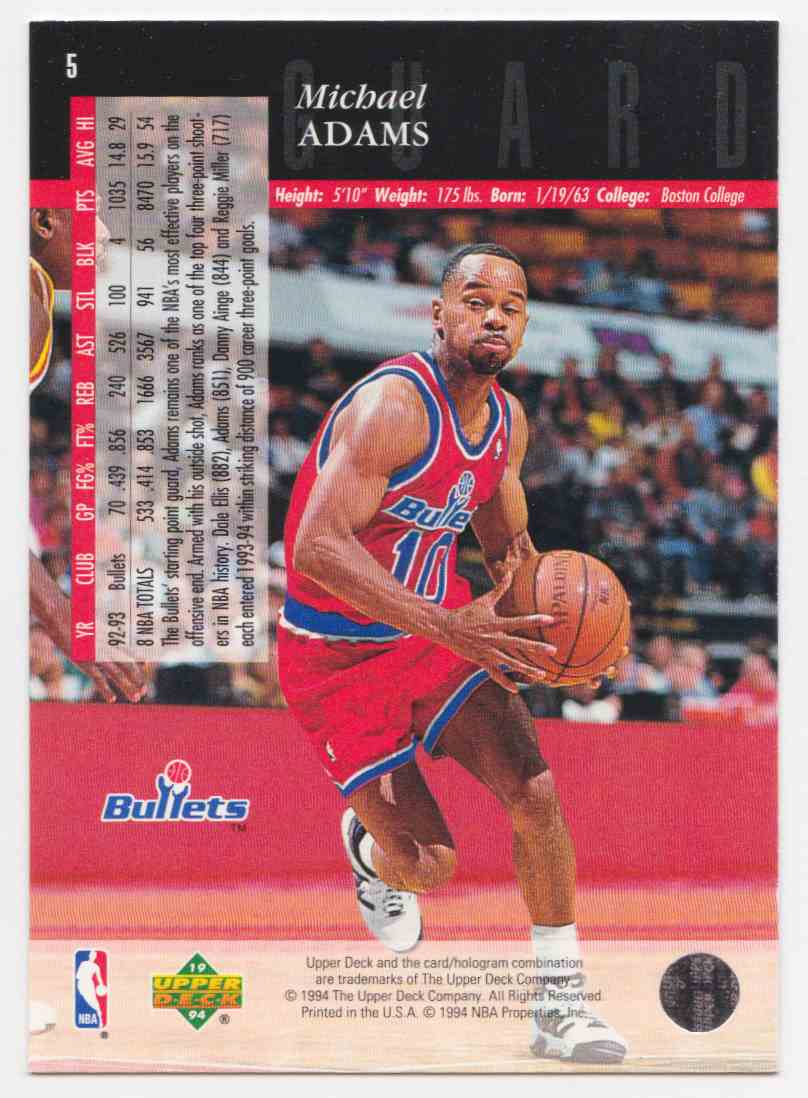 Michael Adams started his basketball career at Boston College and after a successful college career was drafted by the Sacramento Kings in the 3rd round of the 1985 NBA Draft. As a rookie he only scored about 2.2 a game but once he became part of the Denver Nuggets team his career became more successful. In 1990-1991, he averaged 26.5 points and 10.5 assists per game. After this season he went back to play for the Bullets and played his first NBA All-Star Game in 1992. He then became known for his “push shot” and played a few more seasons. In 1996, while playing for the Charlotte Hornets, he retired, ending a career with 9,621 points and 4,209 assists total. 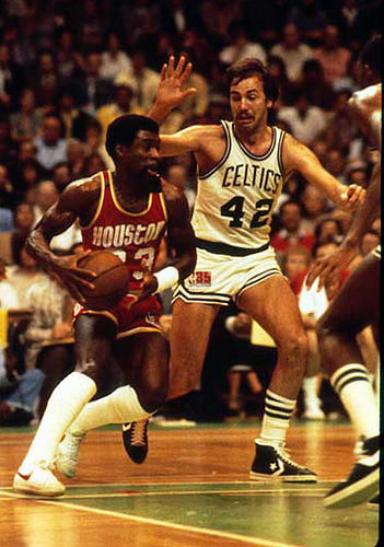 Calvin Murphy was a guard for the Houston Rockets during 1970-1983. At 5’9”, he has been able to accomplish plenty, despite his height. In totally he played 1,022 games and scored 17,949 points throughout his entire career. In 1971 he was part of the NBA All-Rookie Team, and in 1979 he was on the NBA All-Star Team. Through 1980-1981, he held the record for the second highest free throw percentage in a season. In 1980 he was also known for having the most NBA consecutive free throws made. In 1993 he was inducted into the Naismith Basketball Hall of Fame. Today, Murphy is actively involved with the Houston Rockets team.

Nate Robinson plays for the New York Knicks. After having a very successful college career by leading the Washington Huskies to two NCAA basketball tournament appearances, he was the 21st pick in the 2005 NBA Draft. The Phoenix Suns picked him up but he was soon after traded to the New York Knicks. During the 2006 All-Star Weekend, Robinson won the Sprite Rising Stars Slam Dunk Contest. His best dunk was when he jumped over Spud Webb and got the perfect score of 50. Nate topped that performance at the 2009 Dunk Contest by leaping over the 2008 Dunk Contest winner, Dwight Howard (6’11”). 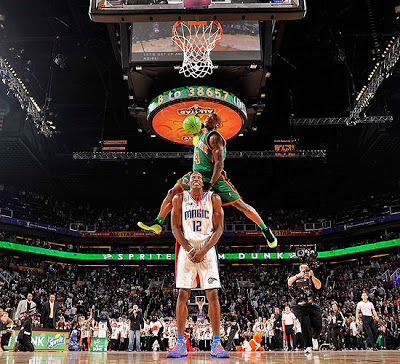 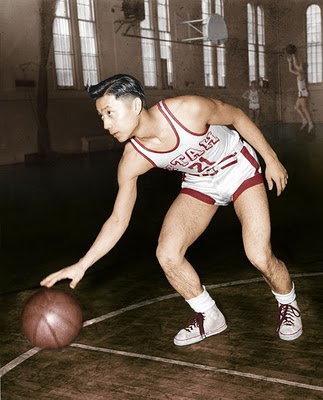 Wataru Misaka is one of the very few well known Asian NBA players. Though he is now retired, he is well known as the first Asian player as well as the first non-Caucasian player to be part of the NBA, which was at the time known as the Basketball Association of America. He was born in Utah and played basketball at the University of Utah where he was able to help take his team to the 1944 NCAA and the 1947 NIT championships. Even at just 5’7”, he was a valuable player and was the first round pick by the New York Knicks. Wataru had a very short career (1947-1948),  and he was able to play only three games before being cut from the team. In 1999 he was inducted into the Utah Sports Hall of Fame.

Anthony Webb stands as the third shortest player to be part of the NBA. After attending Midland College and North Carolina State University, he was the 4th round draft pick by the Detroit Pistons in the 1985 Draft. In 1986, Webb entered the NBA Slam Dunk Contest, and despite being the shortest, had the highest jump of 42 inches and went on to win the contest. 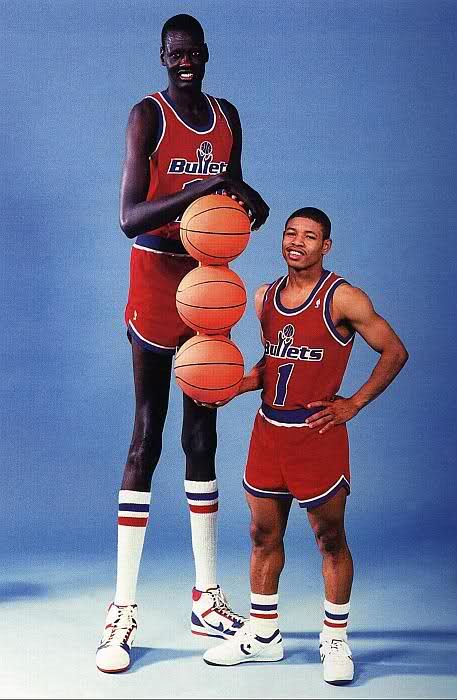 He spent most of his time with the Atlanta Hawks, playing six seasons with the team. Statistically, Webb had his best seasons with the Sacramento Kings where he was a starter from 1992-1995. In 1998, Webb retired from basketball after playing just one season with the Orlando Magic. He played 814 games total and scored 8072 points throughout his entire career. 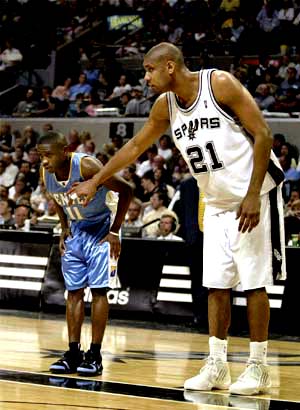 Standing only 5’5”, Earl Boykins is the second smallest player to ever be in the NBA. Though second smallest, he stands as the lightest player ever, weighing in at only 133lbs. Even though he was never officially drafted by a team, he often signed short-term contracts with teams to play as the point guard. He spent most of his career with the Denver Nuggets. He is well known for his scoring techniques after he was able to score 32 points in a game on November 11, 2004. He also played for the L.A. Clippers, Golden State Warriors, Milwaukee Bucks, Charlotte Bobcats, and many others. Today, Boykins plays for the Washington Wizards. 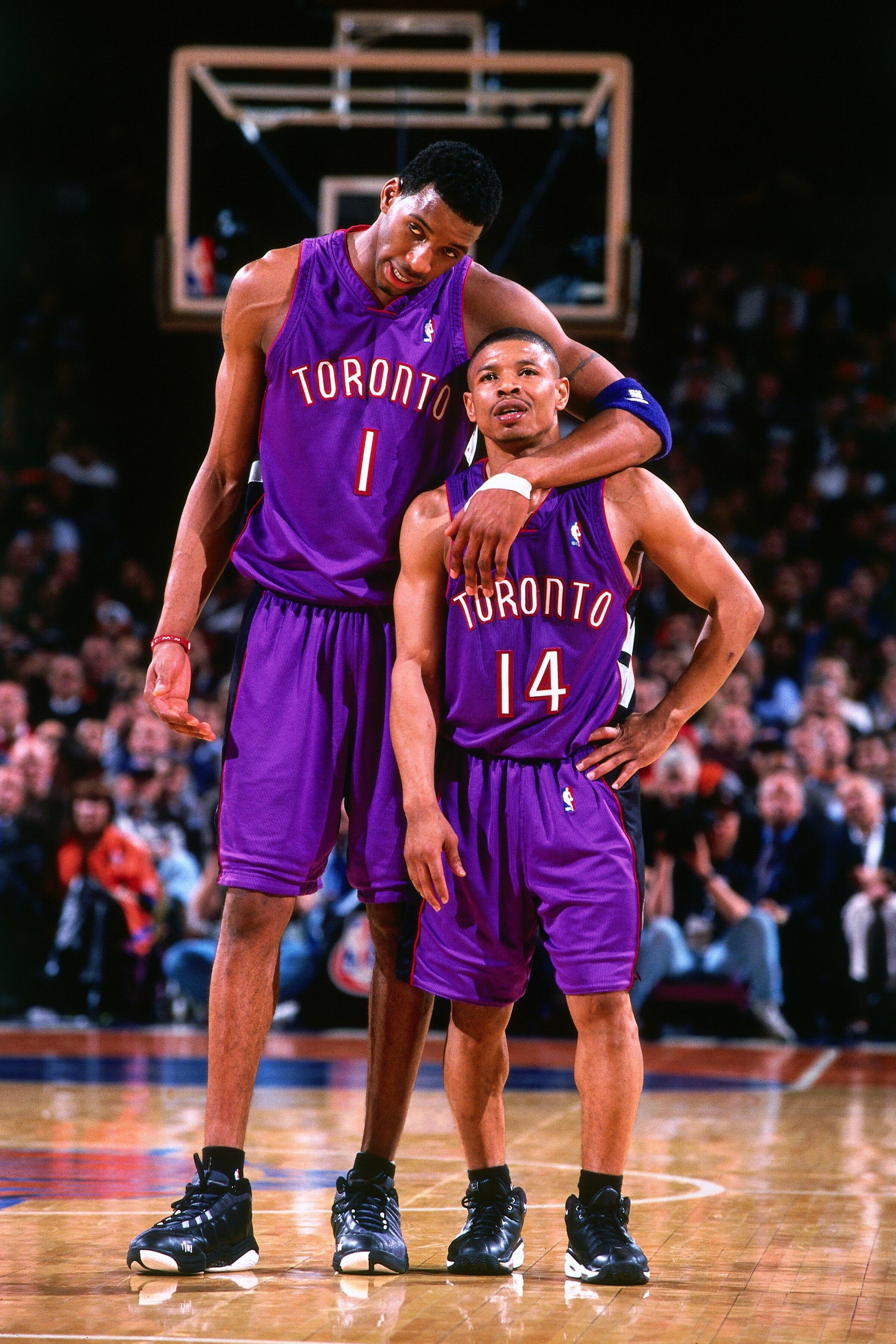 Born and raised in Baltimore, MD, Tyrone Bogues is the shortest man to ever play in the NBA. Despite being only 5’3”, he used his height to his advantage by becoming known as a player who was a great passer, ball-stealer, and definitely one of the fastest on the court. His career was set in stone on June 22, 1988 when he was signed to play for the Charlotte Hornets during an expansion draft as a point guard. After settling in, he was able to play for the Hornets for 10 years and became one of the team’s most popular players. He was definitely seen as a play-off contender.