Musical instruments don’t get any smaller than this.  Coming in at a whopping 10 micrometers long, this little guitar, created by researchers at Cornell University, is no larger than a human cell.  The nano guitar has six strings, each only about one hundred atoms wide, which can be played only by an atomic force microscope.  You won’t be hearing any new music groups claiming nano guitar fame, however, as the sound produced by the nano guitar’s silicon strings would be much too slight to be heard by human ears.  Also, tuning can be a pain.

This musical instrument, built on the edge of the Adriatic Sea in Zadar, Croatia, is the world’s first sea-powered organ.  The wind and waves from the sea play this organ’s diatonic tones endlessly, allowing a visitor to sit inside single chords of sound as they look out into the sea and watch what Alfred Hitchcock called “the most beautiful sunset in the world.”  Created by architect Nikola Basic in 2005, this unpredictable musical instrument plays itself into the top 10 strangest musical instruments.

Created by a mathematical and electronic scientist from the Pentagon in 1954 in the caverns of Shenandoah Valley in Virginia, this organ takes its place as the world’s largest musical instrument at 3 ½ acres in size.  Leland W. Sprinkle carefully selected stalactites throughout the Luray caverns which resonated at specific pitches and tones, and attached rubber mallets which would play these stalactites when keys were pressed at the central organ mechanism.  An incredibly unique instrument.

These days a person can live in their musical instrument.  The Wege house sits on a beach on Lake Michigan, and serves as both a home to the Wege family and as their favorite instrument.  Long strings run throughout the house and can be played by running one’s fingers along any string with a gloved hand.  The sound produced by the house is something akin to a very deep, powerful viola or cello.  Wind harps also sit outside the house, creating their own tones as they are played by nature itself.

If you build it, they will come.  Well, maybe not, but they will certainly take note of your strange creation.  Created by LEGO enthusiast Henry Lim, the LEGO Harpsichord is built entirely out of LEGOs, with the exception of the wire strings.  His project took him two years of planning and building to create an instrument which would hold up to the 325 lbs of tensile pressure exerted on the LEGO blocks by the piano wire strings, but his ultimate triumph, built out of an estimated 100,000 LEGO pieces, stands as unique even among the world’s strangest instruments.

To see more of Henry Lim’s creations, please visit http://www.henrylim.org/Harpsichord.html. You can also hear the harpsichord.

Australian Jon Rose has a mission, and that mission involves both breaking down the boundaries that separate people and playing a very unique and unusual musical instrument: a fence.  Conceived as a metaphor for the regional boundaries and borders which separate and divide the human race, Jon Rose’s practice of playing fences reached its peak when he played a barbed wire fence with a bow at the New Music Festival in Vitasaari, Finland in 1995.  His mission currently has him on a long trek across the Australian outback playing fences and writing about their history.

While there are many “one of a kind” musical instruments that belong on this list of the top 10 strangest musical instruments, one instrument that is not completely unique deserves a place among them: the didgeridoo.  This Australian wind instrument is believed to be the oldest wind instrument in the world.  Each one can play only a single “drone,” however human voices incorporated into it can cerate a variety of musical uses.  While the sound that this instrument makes is fairly common (you have heard it if you have ever seen any movie set in the Australian outback), it remains unique as an instrument type.

Mark Deutsch took the five-stringed bass to the next level with this stringed instrument.  The bazantar is fitted with 29 strings more than its more common sister instrument, which all ring sympathetically when the original 5 strings are played with the bow.  The resulting sound is a chorus of strings singing along with the tones of the played bass, beautiful and haunting when either plucked or bowed.

For more on this strange instrument, please visit Mark’s website at www.bazantar.com. 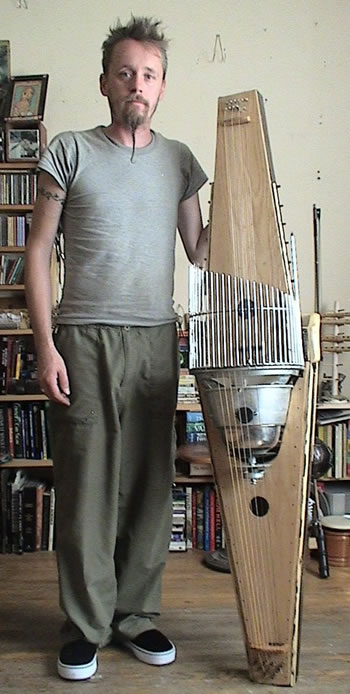 This instrument is exactly what it sounds like: an instrument made from parts of a refrigerator.  To be more specific, the bowafridgeaphone is made from refrigerator grates, a bundt cake pan, and a salad bowl, among other things.  Iner Souster, creator of experimental instruments that have been used by bands such as the Fembots, designed this instrument which creates a very industrial, interesting sound.

Yet another in the series of strange organ instruments, the bubble organ might be the most unexpected.  Aaron Wendel created this instrument out of old rain drain pipes, PVC, pieces of old furniture, and even clothespins found around his apartment.  Using two balloons as the source of air, the depressed keys create resonating tones in the PVC pipes that combine with the sound of bubbling water to create this organ’s one-of-a-kind sound.  Blowing bubbles in your chocolate milk was never this cool.

A combination stringed and percussive instrument, this invention created by Bradford Reed is an incredibly complex instrument. Combining the sounds of electric guitars, drums, and bells, Mr. Reed is able to serve as a one man band of sorts, manipulating basic chords and keeping a regular, albeit unusual, beat.  The unusual mechanism of the pencilina is comprised of two parallel boards fitted with strings and sliding mechanism that has to be seen and heard to be believed.

Professor Scott F. Hall of Cogswell Polytechnical College has used modern technology to create a theremin-type instrument which is truly unique.  The optivideotone projects video onto a ceiling from stock footage, movies, etc. and simultaneously responds to the light, color, and images it creates with loud tones, buzzes, and howls.  Professor Hall can control the images to create his own music.  The optivideotone might not create the most beautiful or symphonic music in the world, but it certainly deserves a spot on the strangest instruments list. Here is a music sample.

Previous ArticleTop 10 Movies That Changed The World
Next Article 10 Shocking Deaths, You May Not Have Heard Of